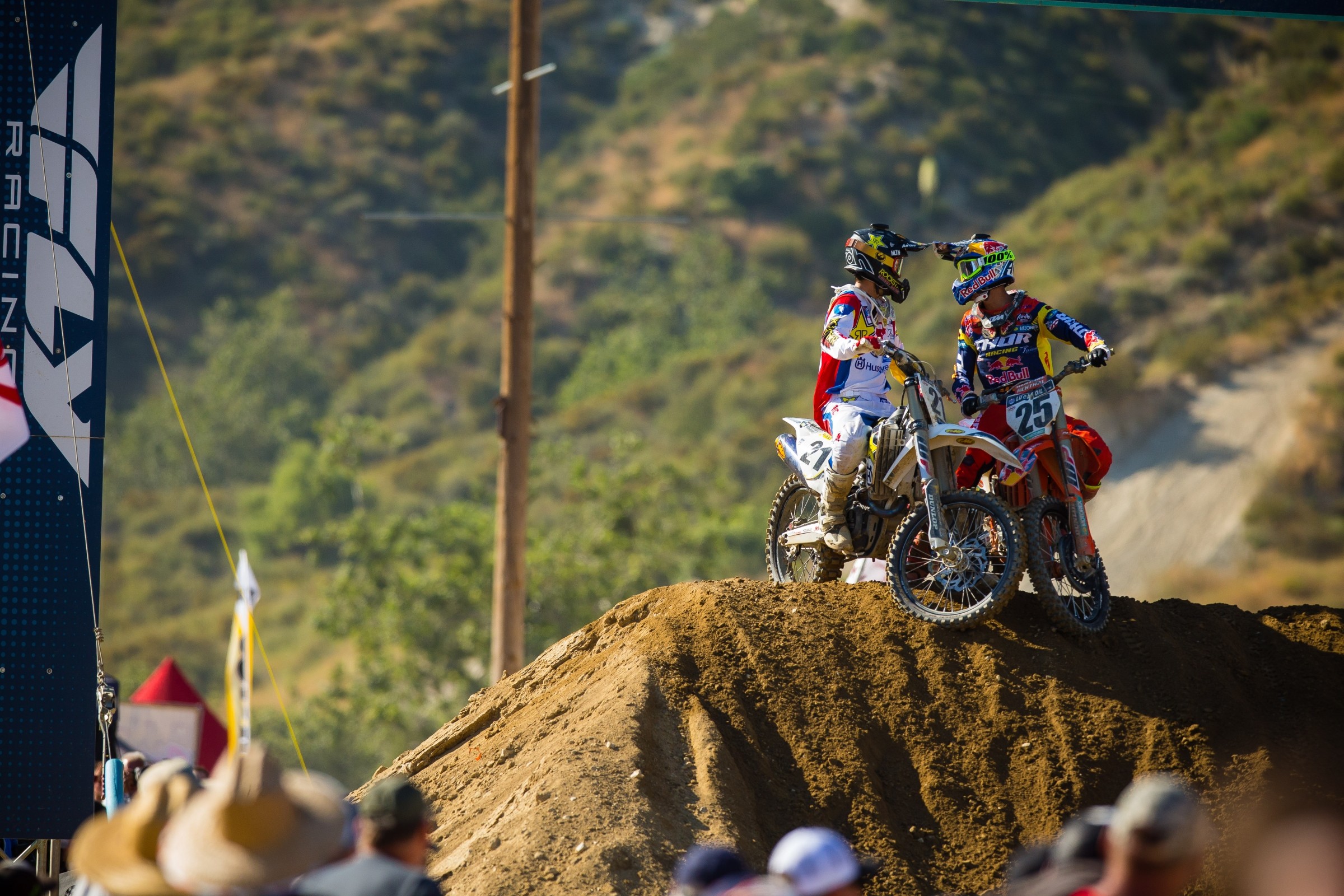 Eight motos, six winners. Not a bad way to start the 2017 Lucas Oil Pro Motocross Championship. Of course the 450 Class was supposed to be a preordained conclusion after Hangtown: Monster Energy Kawasaki’s Eli Tomac just might win them all. What a difference a week can make. In the 250 Class we knew Rockstar Energy Husqvarna’s red-hot Zach Osborne would be up there, and he certainly has been. But the Glen Helen win he somehow landed with 4-2 scores was a much different day than the 1-1 sweep of Hangtown. Who would have thought that a week ago, when folks were talking about a perfect overall win season, that Osborne would be the one left with a shot at that after Glen Helen.

Before the race I had a bit of an issue with the corner/mud straight right in front of the Red Bull and Lucas Oil hospitality areas and told Karl and Judd Scanlon that it just wasn’t a good idea to flood those corners with water and then disc them 18 inches deep. They relented and worked to get it to be less of a mud bog than just a deep-dug labyrinth of intersecting lines and choppy breaking bumps. We compromised, mostly to their idea of a deep-rut obstacle, and low and behold the 450 overall was decided right there!

It started with a bizarre opening lap of the second moto, where Josh Grant fell on his own in the same twisty chicane, and caused a jam-up. Eli Tomac, who was close behind, had the cruel luck of having the same front brake issue he had at the Dallas SX. (Note to Kawasaki: Put whatever system on Eli’s bike that was on Josh’s, or just go down to Malcolm Smith Motorsports and get a new stock system.)

I was standing right there when Eli’s front end locked up, and it was beyond weird. I couldn’t help either because while I was inside the fence, that was not a safety issue and no outside assistance is allowed if he’s going to continue in the race. He made it back to the pits and got it sorted, then started the race a full lap and a half down on the leaders, sans a front brake. The fact that he got 19th is remarkable and impressive. If he wins this title by two points or less, he won it on Saturday in that second moto.

So now Red Bull KTM’s Marvin Musquin has his first red plate in the 450 Class, and Rockstar Energy Husqvarna’s Jason Anderson has his first moto win. The tracks will likely get less rough after the California fortnight of Hangtown and Glen Helen, but there’s new life in both classes amongst the title hopefuls. We’re having quite a series—and some big crowds—despite the absence of defending champ Ken Roczen, the retired multi-time champ Ryan Dungey, superstar Chad Reed, and that international motocross man of mystery, James Stewart.

This should be a fun, dramatic, and entertaining summer for all.