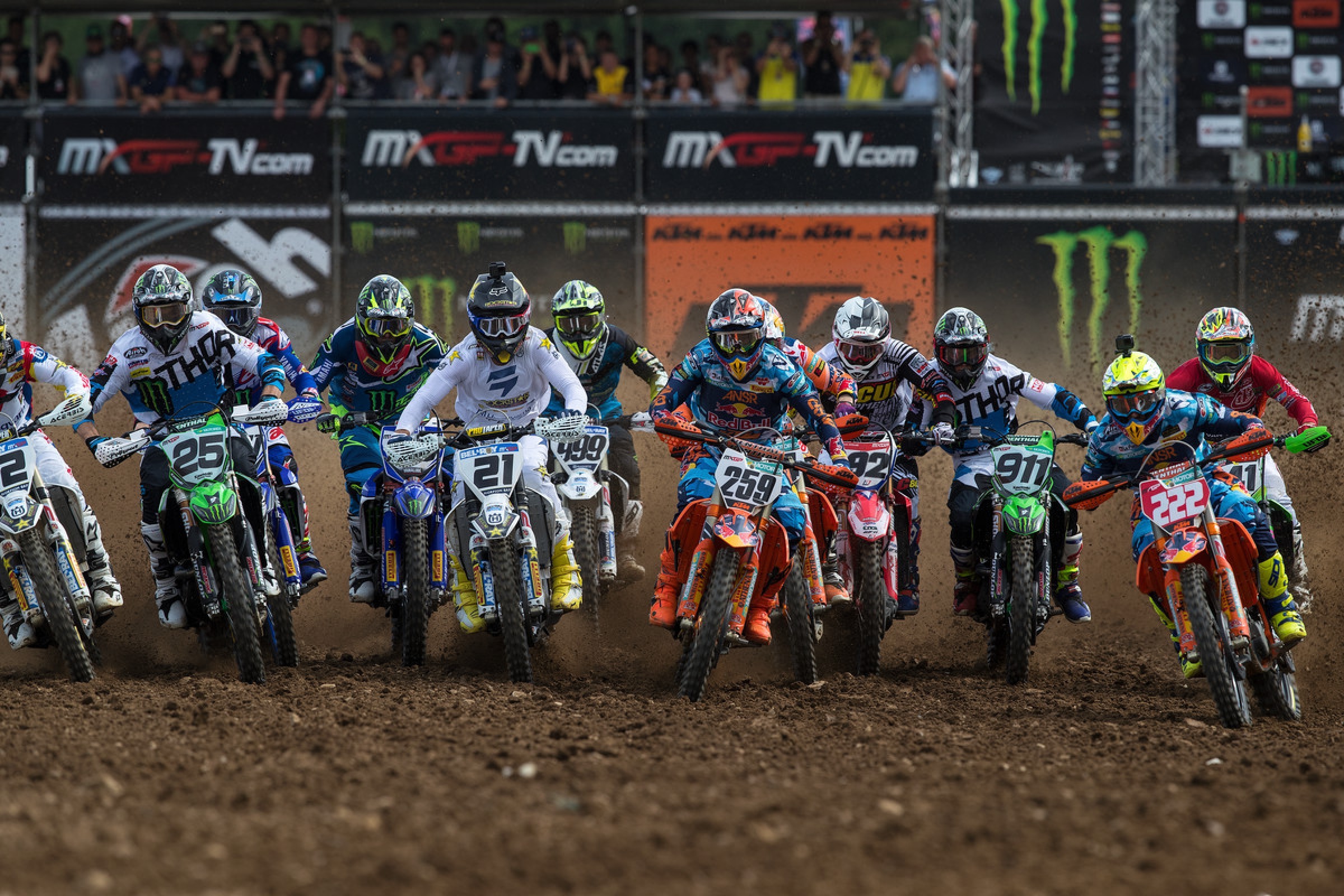 MXGP is now up to six different winners through nine rounds of the 2017 FIM Motocross World Championship as Monster Energy Kawasaki’s Clement Desalle prevailed at one of the most atmospheric and idiosyncratic events on the 2017 schedule. The Grand Prix of France at Ernee brought the series almost to the halfway point of the 19 round schedule and for riders of the MXGP and MX2 classes (not to mention a bumper support card with two EMX categories and the WMX in action) the French hillside was a typically rutty, rough, and hole-strewn hard-pack test.

Ernee has been criticised in the past for the limitations surrounding a narrow and tight layout, despite the spectacular amphitheatre setting and some daunting step-downs and off-cambered turns. The soil had been worked heavily for the first Grand Prix at the site since 2013 and with the 2015 Motocross of Nations still relatively fresh in the mind; particularly for the French public with the sport enjoying a strong following in this northern hotspot of the country.

On a warm weekend the watering and some light rainfall meant the terrain became viciously rough and slick. Line choice seemed generous but overtaking among the front-runners was still a major task and the race orders were largely dictated by the first barrel along the main straight and toward the immense public throng into the opening turn. It is this aspect of the meeting that explains why Red Bull KTM’s Jeffrey Herlings was arguably one of the fastest riders at the circuit but could not trouble the top four and went 5-5 for seventh overall, failing to extend his podium run to four events. And why Rockstar Energy IceOne Husqvarna’s Max Nagl was finally able to play his cards with the best launch and a very decent run to win the first moto (the German was not as prolific in the second start and was bumped back to the far reaches of the top 10 in ninth).

Desalle profited from some recent good form away from the new metal gate flooring with the KX450F and dominated the second moto; his 4-1 was good enough to defeat Nagl’s teammate Gautier Paulin and a subdued Red Bull KTM’s Antonio Cairoli—the Sicilian showing some mortality by commenting that he struggled on the French surface and was partially content to end the weekend with a championship lead that has now reached 50 points and two motos over Paulin.

It was Desalle’s day and the Belgian could be heard quipping that he was relieved to leave behind the “fourth position void” he had been sucked into for most of the campaign to far. Ernee represented the third podium appearance by the Belgian in 2017 (his second win in a season and a half now for Kawasaki and the 21st of his career; by far the most successful MXGP rider of this generation behind Cairoli) and his first higher than the third step and while his sharp getaway was the bedrock of the moto win, #25 has been scouring the lead pack of late.

The recently turned 28-year-old has missed the final set-up adjustments to be able to run comfortably at the front of MXGP and trouble the likes of Cairoli, Gajser, and Paulin, but this shot of confidence and the continued work by KRT in what is the second year with the new KX450F could be a turning factor. There is also the situation around Desalle’s status. The former championship runner-up is a free agent for 2018 and is perhaps the biggest fish to be caught in the MXGP paddock during the silly season. Although he is allegedly close to re-agreeing with Kawasaki to remain in green, this reminder of his potential to other factory teams like Yamaha, Honda, and even KTM will not have hurt his position for another prime deal and opportunity to finally push all the way for the crown.

In terms of the 2017 MXGP story then the withdrawal of world champion Tim Gajser due to a painful left shoulder as a consequence of his qualification crash in Germany seven days previously could be a pivotal moment. The Slovenian withered in the heat race on Saturday as he faded back to 28th and stopped. Details on the injury were hazy and while Gajser’s strategy to head home and begin immediate treatment on the joint were obviously made with a view to remaining in the championship chase, it meant HRC had to put down their tools in France with Evgeny Bobryshev busy recovering from surgery on a broken collarbone.

Gajser has a fortnight to learn the extent of the problem and to assess whether he can remain in the roost of Cairoli and company for another three rounds (Russia, Italy, and Portugal) until the small summer break of three weeks at the beginning of July. Many comments by riders in 2017 so far have highlighted the intense level of competition in the division and the limits being searched around tracks that leave barely any room for error or carelessness. It is one reason why the likes of Tommy Searle (ruptured knee ligaments), Kevin Strijbos (elbow ligament), and Shaun Simpson (broken left hand) are biding their time to return to the gate in prime condition rather than simply toil for points.

On Sunday Ernee produced pockets of furious action that kept the spectators occupied as riders jostled for advantages in alternative lines and tried to force mistakes that would open the slightest door. Paulin and Herlings engaged in some watchable scenes and Monster Energy Yamaha’s Jeremy Van Horebeek might be slightly disappointed to have thrown away second place to Cairoli in the first moto. Teammate Romain Febvre’s wayward season still shows no sign of settling. The 2015 Motocross of Nations hero might be using an old setting on his YZ450FM to try and rediscover some winning form, but a fall in each race at the first of two home rounds for #461 keep him adrift of the box and his longest dry spell since entering the premier class over two years ago.

The public rose to greet the first moto win by Kawasaki’s Livia Lancelot and then cheered the current world champion to second position behind Yamaha’s Courtney Duncan for yet another home Grand Prix success for #114. Lancelot does not hold the red plate though. Kiara Fontanesi retains a slim margin of one point over the defending number one thanks to her third place in France. WMX has chalked away three rounds of the six and has five girls split by just 16 points. The contest is likely to go down to another last race nail biter.

Red Bull KTM’s Pauls Jonass scooped his fourth MX2 win of 2017 with a 1-2 and has a title-worthy trail of seven podium appearances from nine so far. The Latvian defends a 42-point cushion over German GP victor Suzuki’s Jeremy Seewer; the Swiss—third overall in France—owns six trophies but is clearly missing out on starting prowess compared to the KTM 250SX-F and this has made the difference in recent weeks. Jonass was superb in the opening dash of the day but wore a frown after the second where he was unable to trouble Kemea Yamaha’s Benoit Paturel, who relished a rare holeshot and delivered in front of an expectant public for his very first GP checkered flag.

Paturel was quick and strong on vaguely similar dirt in Germany last week (a first moto DNF due to a bike problem hitting his championship aspirations hard) and captured just his second top three classification of the year at Ernee—his first GP at the pressure-cooker site. Initially tipped as one of the main players for the MX2 throne, Benoit has to somehow recover 107 points on Jonass, who with coach and mentor Marc de Reuver in his corner, is playing the long game admirably while hoisting the bar for performance levels in the class at the same time.

Something of a mystery lies in store for MXGP in two weeks. The Orlyonok circuit on the coast of the Black Sea hosted the FIM Junior World Championship last summer and will bring Grand Prix back to the country for the first time in five years (where massive crowds filled the remote and temporary venue of Semigorje).