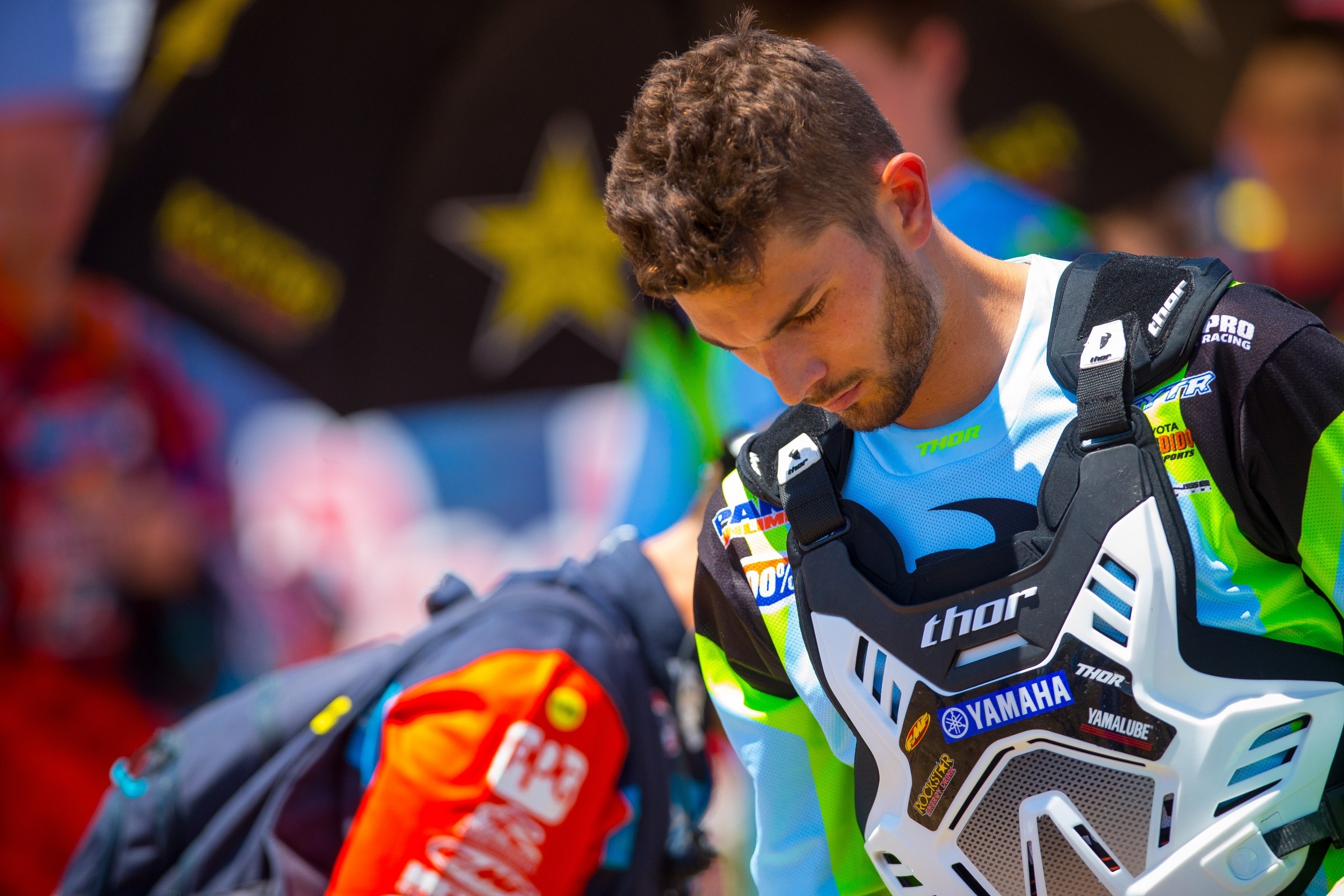 If you want doom and gloom, you’ll find it. Especially in motocross—one of the most dangerous and demanding sports in existence—where horror stories of injuries, pain killer addictions, and more, are easy to find. Then again, if you want positive stories of resilience and inspiration, they’re not hard to find either. This one happens to be about Colt Nichols.

Rewind the clock to November 2016. Nichols was testing at Lake Elsinore when he crashed and broke his femur. Not long after, it was rumored Nichols was trying to be ready to race again for the February 18, 250SX East Region season opener in Minneapolis, causing more than a few skeptical eyebrows to shoot upward. After all, breaking a femur isn’t like breaking a finger, or even a collarbone.

“It was definitely rough. It was one of the tougher injuries I’ve had to deal with just because of the actual pain of breaking the femur,” Nichols says. “It’s hard to operate with and there’s not a whole lot you can do cardio-wise. But I was going to do everything I could. I did every kind of therapy I could with Gareth Swanepoel [the team trainer] and we didn’t leave anything to chance.”

Part of that therapy included cyclic variations in adaptive conditioning (CVAC) in which Nichols regularly spent time inside a sealed pod which varied temperature and air pressure during each session.

“It’s an interesting treatment. They put you in this pod looking thing, which kind of simulates altitude changes. It gets kind of hard to breathe at some point; the it gets easier to breathe. It’s kind of like going really high up in altitude, and it’s supposed to be really good for recovery. It did wonders for me and I came back a lot quicker than a lot of people would have thought I could from that femur injury. I surprised myself.”

Fast forward to Minneapolis, where Nichols had indeed defied the odds by coming back healthy and ready in an incredibly short period of time. With a little over three weeks on the bike, Nichols’ first race back went south almost immediately when he and Dakota Alix tangled on the first lap. Nichols remounted and raced to 10th, then came out and nabbed a third the next week in Atlanta. A fourth place followed in Toronto, and even though Nichols believes he threw away a podium that night, his comeback was going undeniably well. Then, the week before Daytona, disaster struck.

“I was in North Carolina at Cooper Webb’s place,” Nichols recalls. “I had a simple little crash when I came into a turn and lost the front. I stuck my leg out wrong and ended up twisting it, which tore the MCL [medial collateral ligament in knee] off the bone. I was definitely bummed. I’d overcome the femur, which I thought was one of the biggest things I’d ever done. A lot of hard work went into trying to go racing again, so the MCL tear was unfortunate. At that point in time I was riding supercross better than I’d ever ridden in my life—we were just starting to get things going again.”

After the initial shock of injury wore off, Nichols, who describes himself as someone who is naturally a positive person, somehow found himself feeling positive and grateful.

“I was thankful it wasn’t anything more than that. It didn’t need surgery. If I’d have torn my ACL [anterior cruciate ligament in knee], that would have been pretty deflating. The fact that it was just the MCL, I was like, ‘Oh thank God. As long as it’s not my ACL, I can deal with it.’”

Deal with it he did, and despite the discovery that he’d also been dealing with a broken scaphoid in his wrist (suffered in Minneapolis), Nichols used the time off to not only recover, but to double down and figure out a way to come back even stronger for Lucas Oil Pro Motocross.

“We went back to the drawing board and tried to figure out how we could get healthier and more fit,” he said. “It sounds crazy, but my fitness increased a lot after that injury because we started doing a lot of off-the-bike training. My fitness now is better than it’s ever been.”

That improved fitness was on display last Saturday, where Nichols, who’d only had three weeks back on the bike before lining up for just his 10th career National, logged his best career result outdoors by going 5-6 for sixth overall at Hangtown.

“For me, at the first round to go 5-6 for sixth overall, with two strong starts and two strong finishes in a pack of fast guys, I was happy with it. It was productive and I’m looking forward to building and continuing to move in that direction. I think I have a lot more in the tank. It’s going to be a fun summer.”

When asked what his goals for the rest of the summer are, Nichols doesn’t shy away from saying what he believes he can do.

“At the first three rounds, the goal is to finish in the 5-10 range. Once we get to that first break we’ll move everything to North Carolina and start training out there and doing East Coast stuff. At that point I want to start shooting for the podium and be battling with those guys. I think it’s a realistic thing for me to shoot for.”

Nichols’ determined return to racing in an extremely short period of time after snapping his femur, and later, injuring his wrist and MCL, is mind blowing. His ability to be competitive after each injury, something that’s frequently overlooked in this sport, is arguably even more impressive. No matter what happens from this point forward, one thing is sure—it will not involve a lack of effort and dedication from Nichols.