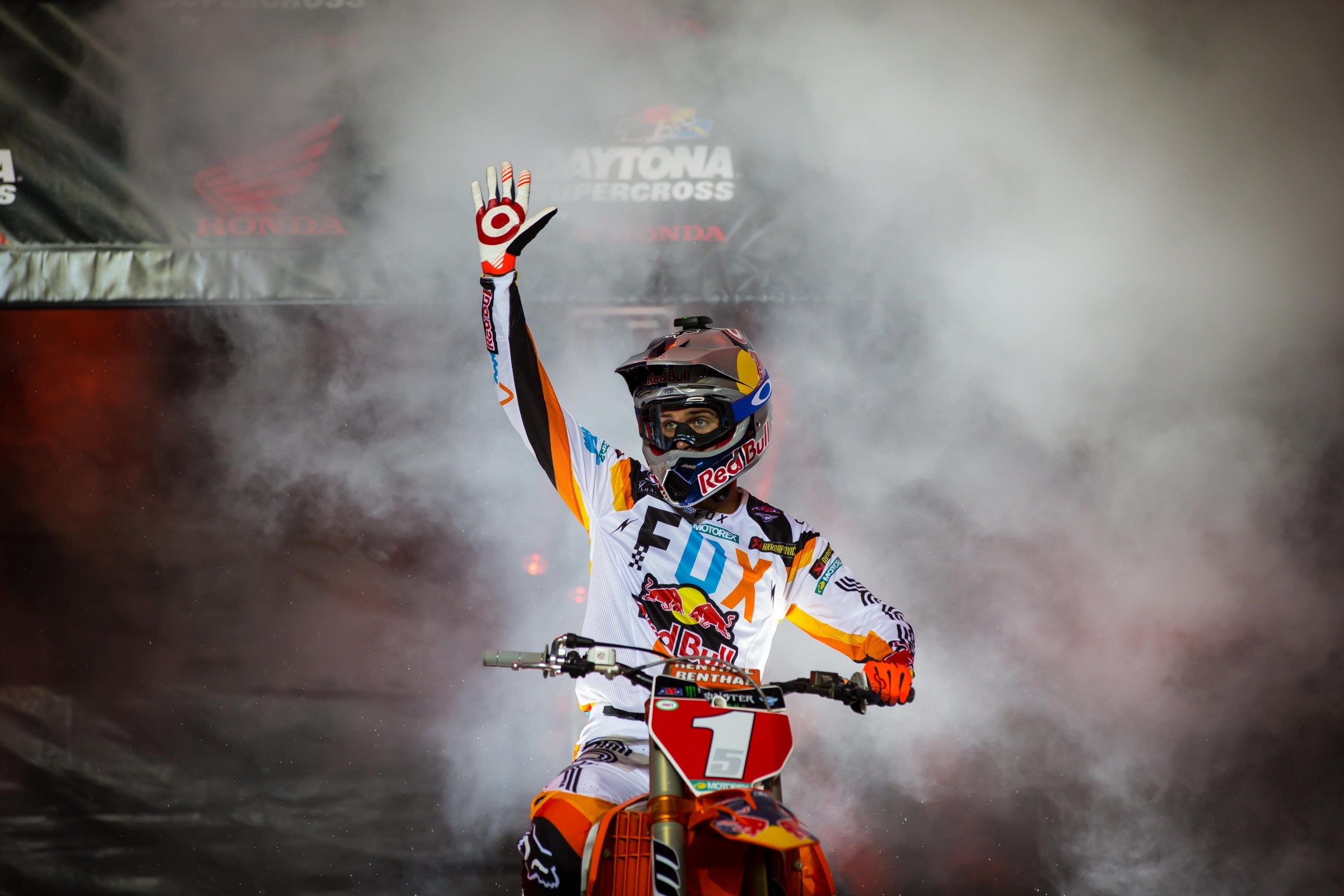 I will never forget the words Jeff Stanton told me back when he announced his retirement at the 1994 RedBud National: How do you know when it's time to retire? When you feel the need to ask someone if they think you should retire. Stanton walked away from the sport after 10 years as a pro, winning six championships in his AMA Motorcycle Hall of Fame career, one of the all-time greats. He was less than two years past his last championship, but he knew the time had come, and he left on his own terms, just like Ryan Dungey is doing today. The difference is that Dungey is doing it less than two weeks past is last title, the dramatic 2017 Monster Energy AMA Supercross Championship.

Honestly, I started to see it coming when Ryan infamously said "it's just dirt bike racing" after one of the races this year, an uncharacteristic shrug in the middle of such a narrow championship fight. Dungey seemed to change this year, especially after early season points leader Ken Roczen's spectacular crash and injury at the second Anaheim SX. Maybe witnessing how quickly it can all go wrong triggered his initial thoughts of calling it a career.

Back in 2014 when Ryan Villopoto decided he was done, he was coming off even more titles, and he was truly on top of his game, winning the last four SX rounds and leading every lap of those rounds. Dungey, on the other hand, seemed to have already peaked. His win total for the season wasn’t nearly as many as he had last year, but he used his championship-management experience (and a break in East Rutherford) to earn himself one last #1 plate. I have little doubt that he's done for good, whether he won this title or not.

Ever since he was plucked out of the intermediate class by the brilliant Roger DeCoster, Dungey has been a role model in how to be a solid moto citizen, an analytical, hard-working rider, and a true sportsman. Like Stanton and Villopoto, he was never flashy, knowing full well that style points don't count as championship points. Instead, he focused on the scoreboard in order to win races and titles.

Now Dungey turns the chapter and leaves his mark on the sport, just as RV did, just as Ricky Carmichael did, just as Jeremy McGrath did, and Stanton and all of those other greats before him. It was a pleasure to work with him at every level, be it as a journalist or a series promoter, and I will truly miss his steady presence at the race track, because we could always count on him.

Congratulations to Ryan Dungey on a job well done. Thank you for everything you did for our beloved sport. Enjoy whatever comes next, because it was well-earned.

Ryan Dungey’s career will be defined by two things: never getting hurt, and then getting hurt once.

While Dungey could easily see the dangers that are inherent to the sport all around him, he never dealt with anything worse that a routine broken collarbone throughout his pro career, so the real risks were always at arm’s length. He was fine with everything else. Aldon Baker’s famously-difficult training program? Dungey says he used to do more work back when he did his own training. Even all the pressure that came with winning wasn’t too much of an issue. Ryan Villopoto started getting grumpier with each title. Dungey was never more outwardly happy than he was during his renaissance in 2015 and 2016. Even with the threats coming from Ken Roczen and Eli Tomac for this season, Dungey looked incredibly comfortable in his own skin at Anaheim 1. I even went to lunch with him on Friday before the opener. You would never detect this was a man about to enter the octagon again, with competitors focused on making him submit. He appeared to feel no pressure at all.

I don’t think the training or the pressure got to Ryan. What happened was, he finally got hurt. Last summer’s random, weird crash at the Thunder Valley National changed it all. The crash was so simple that Dungey actually got back up and finished the moto! A few days later, we learned he had cracked a bone in his neck. Had he suffered a standard broken collarbone again, or the regular MX injuries like a wrist or knee problem, it might have been different. This was a neck injury, though. This could have been catastrophic. And there was no guarantee it wouldn’t happen again—this was a routine crash.

I believe Dungey was able to get back into the swing of riding and training again this off season. He had a contract with KTM, and he wasn’t going to leave them in the ditch. The injury risk still stuck in his mind, though, and when Roczen went out with a big one at Anaheim 2, it was too obvious of a sign. That crash served as one last reminder of how quickly fortunes can change.

From there, Dungey had to try to win a title while keeping one eye on the risks. He didn’t ride as well as he did the last two years, and I feel like it’s obvious why.

So that’s why he has to step away now. He could race outdoors this summer and even come back next year, and that would make KTM, his sponsors, his fans, and even his bank account very happy. But there is nothing he can do to mitigate the risk. He can’t do a farewell tour and just cruise around. He can’t just sign up to do half the races, he can’t back down the pace or the training. Those things could reduce the pressure or the workload, but even they can’t reduce the risk of a random crash happening at any time—like what happened to him at Thunder Valley, or Roczen at Anaheim.

When you’re worried about the risks, there’s really only one strategy: quit when you’re ahead.

I got a hint a couple of weeks ago that Ryan Dungey was going to pull out of the upcoming Lucas Oil Pro Motocross Championship. Many of us expected him to announce he was pulling out of the Nationals, and at the end of the year, announce his retirement. I know KTM had him riding out at the supercross track the other week on what was presumably a 2018 machine to try and convince him to come back to defend his title, but I guess his mind has been made up. And really, if you're Ryan, there's plenty of money in the bank and absolutely nothing left to prove. Second all-time in 450MX wins, sixth all-time in 450SX wins—he's an all-timer.

A couple of things come to mind when I think of Dungey's career. One is that he's perhaps the most unlikely multi-time champion we've ever seen. Along with Jeremy McGrath (C class Loretta Lynn's Champion!) Dungey was a solid amateur, but no one predicted he would rack up the wins and titles that he did. He's as self-made as they come. Some people say it was seeing Ricky Carmichael and then James Stewart (his riding partner for a bit) and the work they put in that made him realize what he needed to do to become great.

The other thing that comes to mind is how much his career parallels that of his main rival, Ryan Villopoto. RV has more SX wins than Dungey, but Dungey has him covered in motocross. Both riders left while on top, both riders admitted to being burnt out (you've been hearing Dungey talk about all the work involved and all the races he has to do all year long), and both riders worked under uber-trainer Aldon Baker.

Something Dungey said in the Vegas SX press conference struck me as odd. "I got a taste of the other side in the summertime last year. I got to go home to Minnesota. It was nice. You’re fishing on the lake. It’s good. Life’s good. That was pulling on me."

I just knew that I had heard that before. Damon Bradshaw told me in a 2008 podcast that when he hurt his knee in 1992 and got some time off, he realized all the things he was missing in life as he spent time out on the lake in North Carolina. Much like Bradshaw, getting hurt last summer was an eye-opener for Ryan Dungey in more ways than one. Like Damon, he got to see a side of life that he never really had before.

Dungey wasn't a dynamic personality; he's been press-shy this past year or so; and he's just a Midwest dude who was great at racing dirt bikes. I termed him "Dungenator" for a few reasons, the main one being that he just never, ever got tired in a moto and was a machine on the bike. The second reason was because once he reached the 450 Class, we never got much out of him in terms of emotion or opinion.

I think that, much like Jeff Stanton, we won't fully appreciate Dungey until years from now when you're writing something about records or wins and see where he's at and what he's done and you go "Huh ... wow."

He was THAT good for THAT long. What a career.

Ryan Dungey was an unlikely legend of the sport. He didn't dominate as an amateur. He wasn't signed years in advance with a path paved to stardom. Honestly, I hadn't really heard his name before Roger DeCoster (with a nod to Cole Gress) pulled him out of the B class and put him on a factory Suzuki RM-Z250. I was actually on his flight to his first National at Millville and remember thinking that he must be crazy nervous. He had never raced the pro class and was thrust into the sink or swim limelight. I have to admit I was skeptical about the move from the B class to the big show, but I could not have been more wrong. While that first race wasn't life altering, he went on to win his first ever supercross in Atlanta the next year and that was only the beginning. He won titles both indoors and out on both bikes, but really cemented his legacy on the 450. His four SX titles puts him in extremely rare air and puts an exclamation point on his final season.

As far as walking away now and the associated timing, I can only refer to my own personal experience. In the summer of 2012, I didn't want to be racing. I was 33 years old and had lost the desire to take the risks necessary to reach my max potential. Being able to race with a clear head is critical to pushing the edge. If your first thought is "don't get hurt", that's a clear sign that it's time to do something else. It happens to everyone at some point. My time was 2012. Kevin Windham was 2014. Ryan Dungey's is now. Chad Reed's will be in 15 years or so I think. Point being, it's inevitable for age, wisdom and risk/reward to catch up to everyone. Only you know when that time is and if he is smart enough to know the time is now, good for him. His career will go down as one of the best from top to bottom. He always seemed to do things "the right way" and to call his own number. Leaving on his own terms seems fitting for Ryan. Bravo.