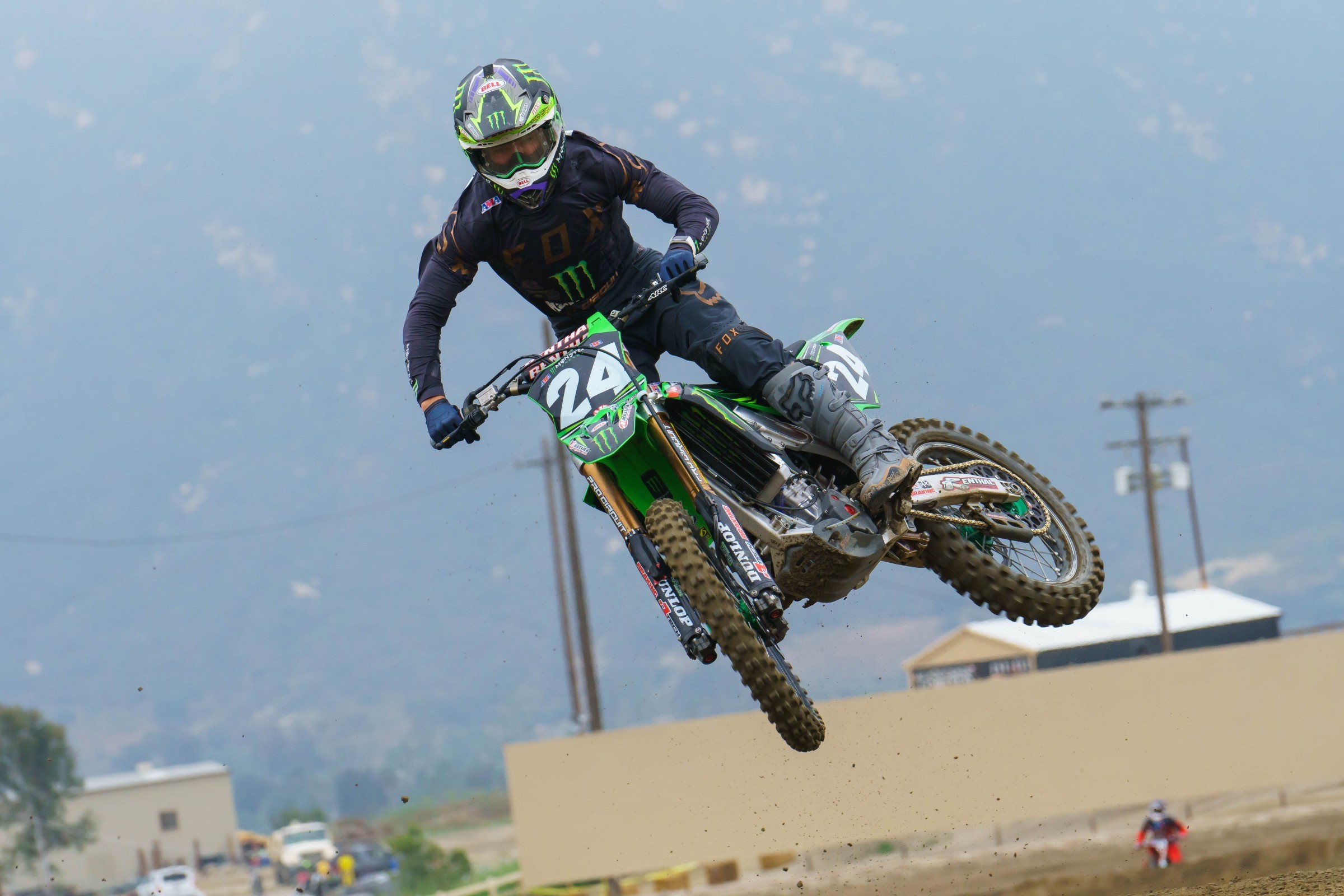 Monster Energy/Pro Circuit Kawasaki’s Austin Forkner was a revelation last summer in Lucas Oil Pro Motocross. Instead of coming out of the blocks flying—but then fading—like many rookies, Forkner built speed and strength steadily all season, culminating in a flurry of podiums and an overall win at the final round of the season in Indiana and AMA Rookie of the Year honors.

Such success set big expectations on Forkner for his first shot at Monster Energy Supercross, but while he showed some speed and grabbed two podium finishes, he wasn’t in title contention like many expected.

Time to reset for outdoors. Can Forkner build off of his 2016 season and battle for a number-one plate this time? Kyle Scott rang up Forkner on Saturday to find out.

Racer X: How long have you been out in California?
Austin Forkner: I think a week now. This is the first week. Since Vegas.

How long do you plan on staying in California for?
I don’t know. I’m debating either going back after Hangtown or after Glen Helen, but one or the other. I’m not really sure yet.

Does it mess up your training program being out of your normal setting at home and being over here?
No, not really. I like it better in Oklahoma, but I can still do all my same work here, pretty much. This doesn’t really mess it up that much.

Can we talk about your supercross season? How would you say it went?
It was all right. Probably I would say a pretty standard rookie season. I had some crashes and stuff and some stupid mistakes, but I rode pretty good at some races. Dallas, Phoenix. I rode really good at Vegas, and I rode really good at Salt Lake too, but just a first-turn crash at Vegas and I crashed in the whoops at Salt Lake. I definitely got better after basically the first couple California rounds, they weren’t really the greatest. After Oakland whenever I crashed out, I crashed and got ran over and my gas cap broke and I had to pull in. We don’t really carry spare gas caps. I was pretty much out of the points thing then, so I was just like whatever. I didn’t have the greatest first couple rounds so it was going to be hard to come back anyway, but I was kind of like, whatever. I’m just going to try to go and get good race finishes.

You said you made a big improvement after the first couple rounds. What do you think was the difference for you? Was it just getting the nerves out?
I don’t really know. I just kind of figured it out a little bit I guess. I think at the beginning of the season, in supercross you kind of have to push each other around, and I was kind of letting it happen a little more than I should and I wasn’t really pushing back as much as I could. They would kind of move me out of the way and I would let them get away too much instead of trying to stay right there with them and try to get them back quick. They would get away and then it would be hard for me to catch them, if I could even catch them. I guess I just kind of figured some stuff out. I felt a little bit better in the whoops. Got a little bit better bike setup. It kind of sucked that we didn’t have three practices at the beginning of the season. We only had two. For me, [it was tougher because I was] learning all the new tracks and stuff. I didn’t really have a problem learning them but at Phoenix and Dallas and Salt Lake we had three practices and I got a podium at Phoenix and Dallas and at Salt Lake I was running second until I crashed. All the races that we got three practices I rode really good. It was kind of weird that we didn’t because it was West Coast. You would think we would never have to worry about rain, but it was pretty much battling rain all year.

So you had a practice crash before Seattle, right? That’s what caused you to miss that race?
Yeah. I was testing some outdoor stuff. Kawi actually, plus the Pro Circuit guys, came out to [Robbie] Reynard’s in Oklahoma where I train to test for outdoors. It was just pretty late in the day. The track was a little bit dry. I was testing some new stuff and just kind of made a mistake up the face of this one jump. It was kind of square-edged bumps up the face a little bit. I pretty much did what [Chad] Reed did at Millville a couple years ago where I got ejected, except the jump wasn’t quite as big. I just landed really hard on my hip and my right side and just jammed everything up in there really hard. I just kind of had to take a couple weeks off to let it get better. I could have made Seattle, but by the time I felt like riding, I had just started riding outdoors again a week before, so I didn’t just want to go straight into supercross. I would have only had about a day or two days back on supercross before Seattle, so we just figured it wasn’t that great of an idea. Just go to Salt Lake. It was a weekend break in-between Salt Lake and Seattle anyway, so that gave me even more time to get back ready. I’m feeling pretty good now from it. I’m not quite back to 100 percent but good enough to where I’m not really bothered by it on the bike. So that’s good. It just kind of re-aggravated an injury that I had pre-season, back in December or November. I cased a quad riding supercross and just jammed my whole back really hard. It just kind of re-aggravated that. So that kind of sucked, but I’m feeling pretty good now. I’m ready for outdoors.

How has that been going?
It’s good. He’s at pretty much all the races so if I need anything at the races … but I’ve visited him while I’m in California two to three times. I don’t know that you really ever feel 100 percent when you ride dirt bikes.

On race day, does Dr. G. come and work with you?
Yeah, anything I need before the race. He’ll usually come and help me before the practices and races, just get me loosened up. Then in-between practices sometimes only if I need it, and then after the race obviously because you’re pounding your body pretty hard. So he’ll just kind of come get me straightened back out so that I feel good for the next week and the next day.

You won the last national last summer in outdoors. How would you say your outdoors season went last year?
The last one was really good. It was a little bit muddy but it wasn’t so muddy that you couldn’t race. I actually really like the track when it was like that. It was muddy but it was just really rutted and really soft instead of mud. I rode really good there and I got good starts. I was getting a lot better at the end of the season too. I pretty much had all podiums leading up to that. I think I got five or six podiums and they were all at the end of the season. I’ve been feeling good and I’d like to start outdoors like that this year, then I would definitely be more up there in a title hunt. Just going to try to get podiums and top fives and everything and try not to have the bad races, which I really didn’t have last year. For even being my rookie season I think my worst finish was a 12th or something in a moto. So that’s not horrible. It’s not DNFs. I got fourth in the points last year, which isn’t bad, so if I can improve on that I think that’d be good.

How are you feeling coming into the outdoors? Who do you think is going to be your biggest competition this summer?
Honestly I have no idea. There were fast guys last year. The guys that I think could be fast this year may not be fast. The guys that weren’t fast last year could be fast this year. I have no idea really who is going to be fast. I guess we’ll just have to wait and see who is going to be up there at the first round. I hope that I’m one of those guys up there. All I can only do is worry about myself. I’m not really worried about the other guys like who’s going to be fast and who’s not, just whoever is fast I’ve got to try to beat them.