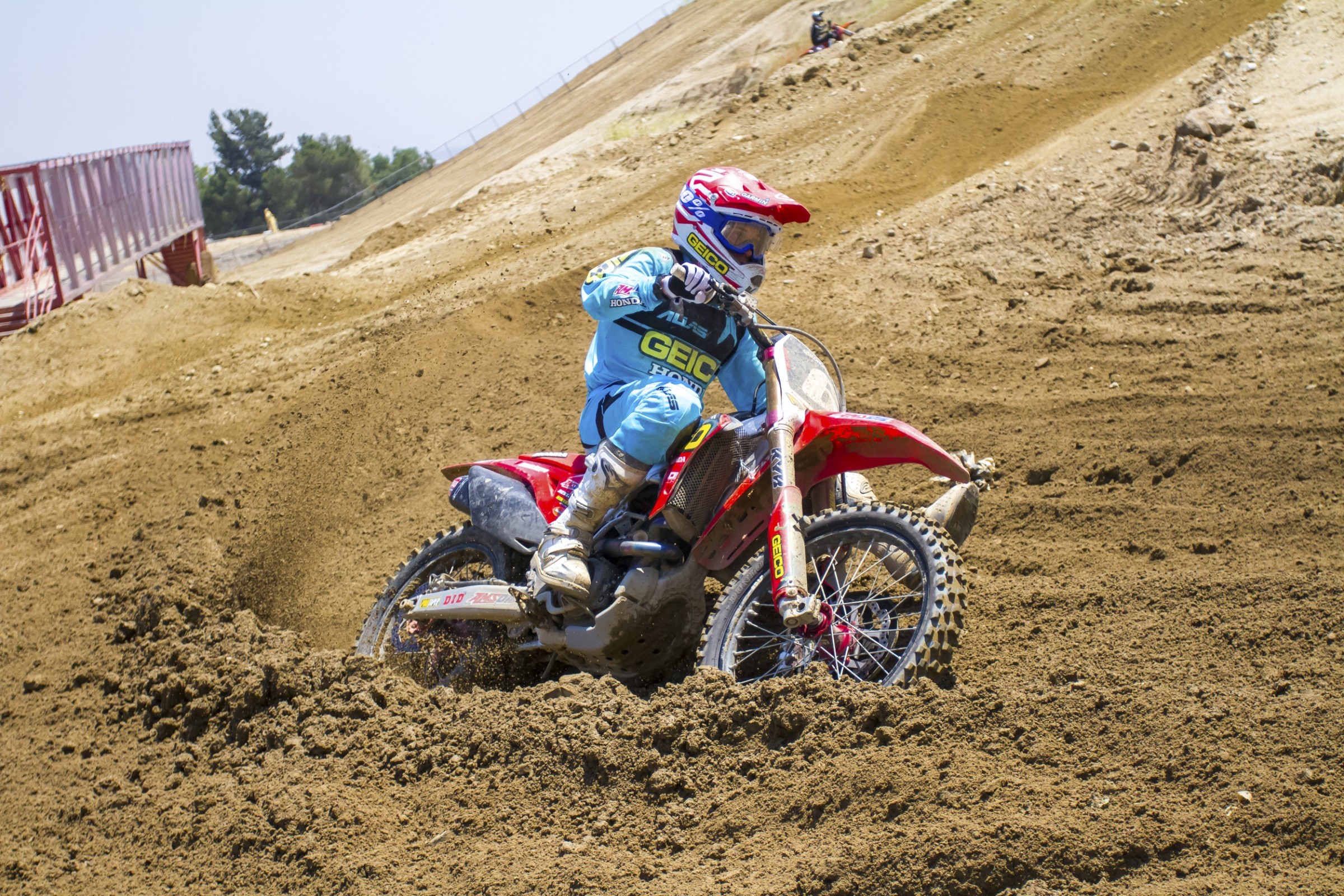 Jeremy Martin’s 2017 supercross season, and first with the GEICO Honda team, was underwhelming at best and a disaster at worst, with his best finish in the 250SX West Region being a sixth. There was one highlight, though: a spectacular ride and a runner-up finish at the Daytona Supercross, on a Honda HRC 450 borrowed from Ken Roczen.

But the Daytona momentum didn’t last long. After banging himself up in a practice crash, Martin decided it would be best to pull out of supercross early and focus on the upcoming Lucas Oil Pro Motocross championship. We haven’t heard much of anything about the Minnesota native after Daytona, so our own Kyle Scott caught up with him at Glen Helen during the Stopwatch Nationals.

Racer X: We haven’t seen you since Daytona. What’s been going on?
Jeremy Martin: Unfortunately, I had an issue there in practice during the week after Daytona. I had to jump through the bars and ended up landing on my legs and I skid into the landing. I smashed my ass into the ground. I had a herniated disc, so that was pretty painful. I couldn’t even lay on my back or anything for like eight or nine days, and I had to stay down on my stomach. I had a bag of peas on my ass icing it. So I just said, “Hey, you know what? Let’s focus for outdoors.” The supercross season’s been a wash. We’re out here at Glen Helen and we’re two weeks out. We’re looking forward to Hangtown.

How long have you been back on the bike?
I got back on probably 10 or 12 days after. I just rode in pain. I was going like six to seven seconds a lap slower than my normal speed. I stood. I never really could sit down. We just kept going. I didn’t want to lose that fitness and stuff like that. Like I said, with how the supercross season’s gone I was so upset and disappointed that I got a lot of motivation to go out and win.

So you’re the two-time champ here. What’s the mindset going into the season?
I’m a two-time champ for sure, and I think about that, but there’s a lot of other guys out there that are hungry and they all want the same thing I want. Every year it resets. I’m on a new team. I learned a lot of things about the Honda during the supercross season. You can’t quite set it up [like his previous bike]. I tried to kind of mimic maybe how my Yamaha was, setup-wise, but you can’t really do that. It’s such a different chassis and stuff like that that I learned a lot. We’re ready for the season and we’re ready to battle.

After Hangtown last year you and Johnny O’Mara parted ways. What’s your training program looking like now?
The training program is good. I did a good boot camp here after I got hurt. I feel strong. I feel healthy. I wake up every day and I don’t feel like I need to have a pot of coffee. I feel strong. I’m not tired. I’m not moody. All the hormones, everything is healthy.

How’s everything been going with the testing and everything?
The testing is going good. The GEICO Honda guys are amazing. I’ve really enjoyed it. It feels like a family over here. I was missing out, I think. We’re here and we’re working hard.

What track are you looking forward to most going to other than obviously Millville?
I like RedBud. I like Southwick. Anything that’s just freaking gnarly. Anything that’s rough, gnarly, ruts everywhere. It separates the men from the boys.