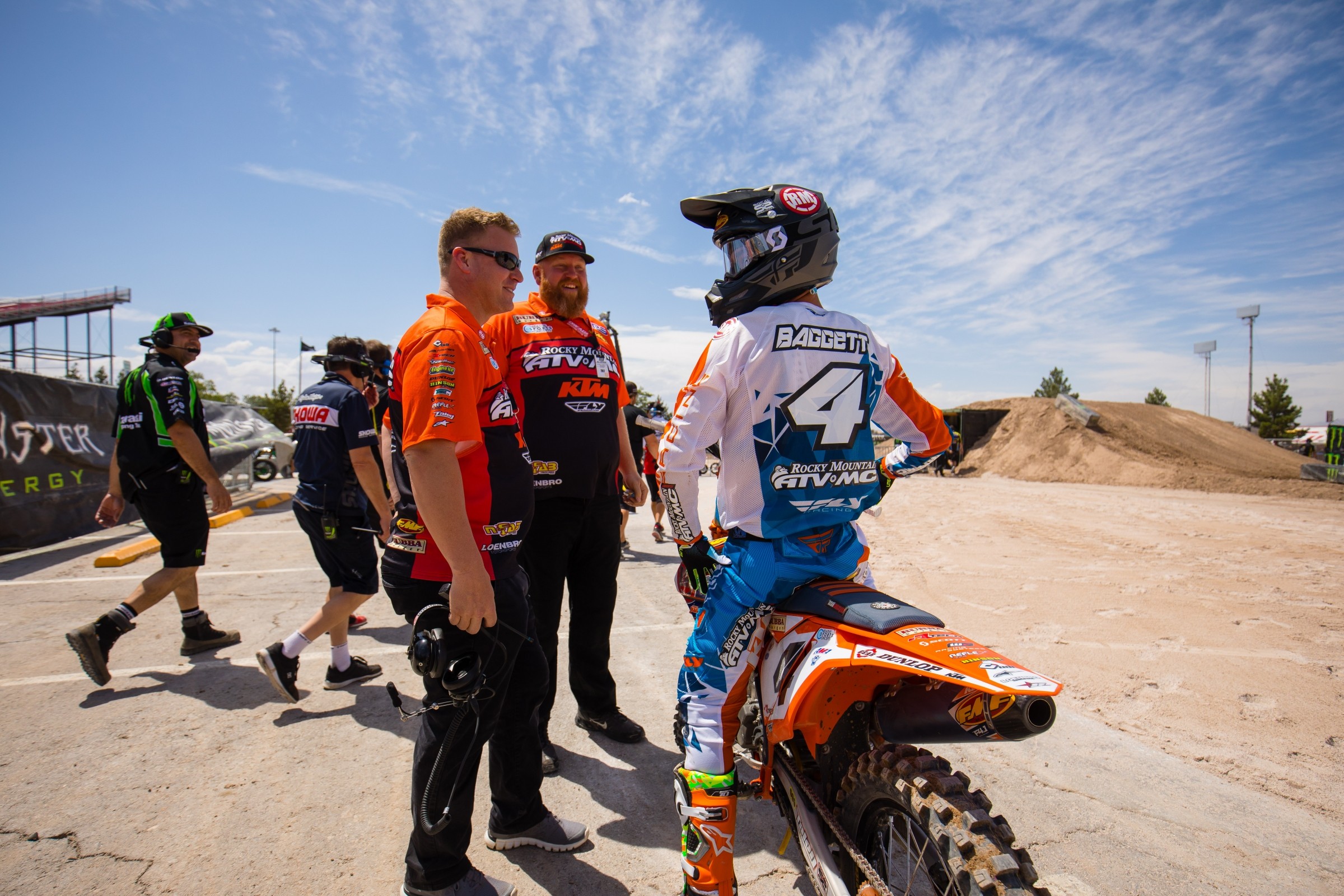 At one point or another, one must realize that continuing to talk about the same thing over and over eventually leads to insanity. Have we reached that point with the season finale of Monster Energy Supercross? Eh, probably not. If you wish, you can read about Eli Tomac/Ryan Dungey and Zach Osborne/Joey Savatgy/Jordon Smith and discuss amongst yourselves pretty much anywhere else on the site.

Typically during the later stages of most seasons, the championship has been a non-issue for weeks. Either the title has been wrapped up or we’re all just waiting for the inevitable. While this isn’t great as far as entertainment value is concerned, it does give us a chance to shine more light on other riders and points battles. Well, with the ending we just had, this year was a bit different. So, here are some things you may have missed this season.

Is what my boss Jason Weigandt emailed me earlier this week. He referenced past points battles Davi Millsaps has found himself in heading into the final round—like in 2012 when he battled Justin Brayton and Ryan Dungey for second (he won) or in 2013 when he again battled Dungey for second (he won that one, too). So, entering the weekend four points behind the idle Cole Seely for fifth, and two up on his Rocky Mountain ATV/MC-WPS-KTM teammate—Blake Baggett—you knew Millsaps was paying attention.

Both Millsaps and Baggett have enjoyed great seasons, but beating your teammate usually means something more. And top five likely means a nice bonus. This one came down to the bitter end.

All seemed lost for Millsaps as Baggett held fourth late in the race, which would have given him enough points to leap Seely and his teammate. But Baggett made a slight mistake and went down, which sent him back to seventh, and with Millsaps in eighth, it gave Davi a one-point lead on his teammate to clinch fifth. One point!

Roczen and Canard Tied In Points

A lost year for two incredibly talented riders. Everyone is aware of the devastating injury Ken Roczen sustained at Anaheim 2, which has taken 11 surgeries to correct. Through two rounds, Roczen scored maximum points, but his season ended at round three. For Trey Canard, his first year with KTM was a complete wash. He injured his shoulder at the first race of the season and missed four rounds. He returned, only to get injured in practice at Toronto and miss another two races. While he returned for two rounds, he never appeared like the Canard of old, and eventually pulled out of the series due to a virus. Canard was recently injured again (collarbone) while testing for Lucas Oil Pro Motocross and may miss a few rounds. At the beginning of the year, no one expected these two race winners to be tied for 20th in points.

The Ebbs and Flows of the West

The battle for second in the 250SX West Region took so many twists and turns it’s hard to keep up with. Troy Lee Designs/Red Bull KTM’s Shane McElrath left Round 5 in Oakland with a 15-point lead on third place Aaron Plessinger. But following a mechanical from McElrath while leading the next weekend in Arlington, Plessinger took over second by four points. After the long West Region break, Plessinger won in Seattle to stretch his lead to 13 points. Then, the next weekend in Plessinger crashed while leading, McElrath won and took an 11-point lead into the finale.

As crazy as this battle had been, it somehow got even crazier in Las Vegas. Both Plessinger and McElrath went down in the first turn of the East/West Showdown. Plessinger came from way back to third, while McElrath finished 11th, giving him just enough to claim second—by ONE POINT!

From Third to Seventh

At one point in the series, Cole Seely had a solid hold on third place in the championship. He was riding well—finishing in the top five at every round prior to Atlanta—while Marvin Musquin struggled in Phoenix and Oakland, and then had a virus in Toronto and Daytona. Then, Musquin got hot—going 2-2-3-1-4-2 down the stretch—while Seely had some tougher races and then took on an injury. After missing three of the final four rounds (and pulling out early in East Rutherford) due to injury, Seely dropped from third to seventh in the final standings.

Chad Reed may not have had the year he wanted—just one podium—but with his great ride in Vegas, the 35-year-old still could have gotten eighth in points and ended the year with a second trip to the box. Instead, Reed was pushed off the track late by Jason Anderson and finished sixth. This also allowed Dean Wilson to get around him for a fifth-place finish. Chad lost at least five points because of the Anderson shove, and Dean edged Chad for eighth in points by three.

Roommates at Club MX, and frequent guests on the Pulpmx Privateer Island Podcast, Cade Clason and Alex Ray have a special kind of relationship. Funny and engaging, both riders seem to just enjoy going to the races, and both have had good seasons to boot, with Clason making six mains and A-Ray making nine.

Entering the weekend, Clason held a slim three-point lead over his roommate Ray, but when he failed to make the main event, it opened the door for the CycleTrader.com/Rock River Yamaha rider. Ray just needed to finish 18th or better to edge his buddy, which would match a season-high. Well, Ray cleared the hurdle and then some, finishing a season-best 16th and taking 26th in points by two. Weigandt made sure to remind them….

@aray314 @cadeclason52 Good morning! Either of you guys glance at those final 450SX standings? #ClutchARay

Now, let’s take a look at who had seasons that flew under the radar. If we missed someone, we’re sure you’ll let us know below.

After an injury-riddled final season with Yoshimura Suzuki, Blake Baggett had a fantastic first year with Rocky Mountain ATV/MC-WPS-KTM. Baggett told us that this was the first time in his career that he actually enjoyed supercross. It showed. His results may not jump out at you, but Baggett showed some serious speed this year, and got the team (formerly BTOSports.com) its first career podium. In his third year in 450SX, Baggett also had an additional four top five finishes.

Despite riding much of the year with two wrist injuries, Millsaps was fantastic in his second year with the team. He placed inside the top 10 in 14 of 16 races, and finished fifth in points—his best overall finish since his magical 2013 season.

Gone are the days of Grant sending it and hoping to win—or crash trying. At 31 years old, Grant has found a balance, and despite missing three rounds, he finished 10th in points. He closed the season strong, going 5-5-7-3 over his last four races. The Las Vegas podium was his first since New Orleans 2012.

All this guy does is make main events! A true privateer, Schmidt only missed two main events all season (he did not compete at San Diego due to German SX race and missed St. Louis due to a hand injury). He also had two top-15 finishes on the year and finished 23rd in points.

Huge year from the Rippah. Decotis had three top five finishes (where he battled for podium spots), he led 10 laps on the season, he won the West Region heat race in Las Vegas (which is basically a main event) and he finished top 10 in every round this year to capture fifth in points. That was the highest points ranking of any GEICO Honda rider.

No one predicted Smith would contend for a title, rather less enter the final with the points lead. After two injury-riddled years with GEICO Honda, Smith won twice, finished on the podium three additional times and damn near won the East Region Championship. His career is now well on track, and he will enter 2018 as a strong title contender.

No one knew what to expect of the former MX2 championship contender in Monster Energy Supercross. He entered the year a little behind the eight ball due to an injury, but he was impressive throughout, challenging for wins and podiums in his first year in SX. Sixth in points and two podiums is a strong way to start a U.S. career.

Too bad for the collarbone injury sustained at Round 2, or Oldenburg could have been a legit contender out West. In just four races, Oldenburg went 4-3-2-5. His stock is definitely rising for next year.

The second year pro from Australia had a breakout year in 2017. Prior to this year, he had never finished in the top 10 of a 250SX main event. This year he garnered five top 10s in seven rounds raced, and finished a strong 12th in points. Teams should be keeping an eye out on him for 2018.

The veteran made every West Region main event, scored a career-high eighth in Oakland, and finished 13th in points. Strong year from the Florida native.