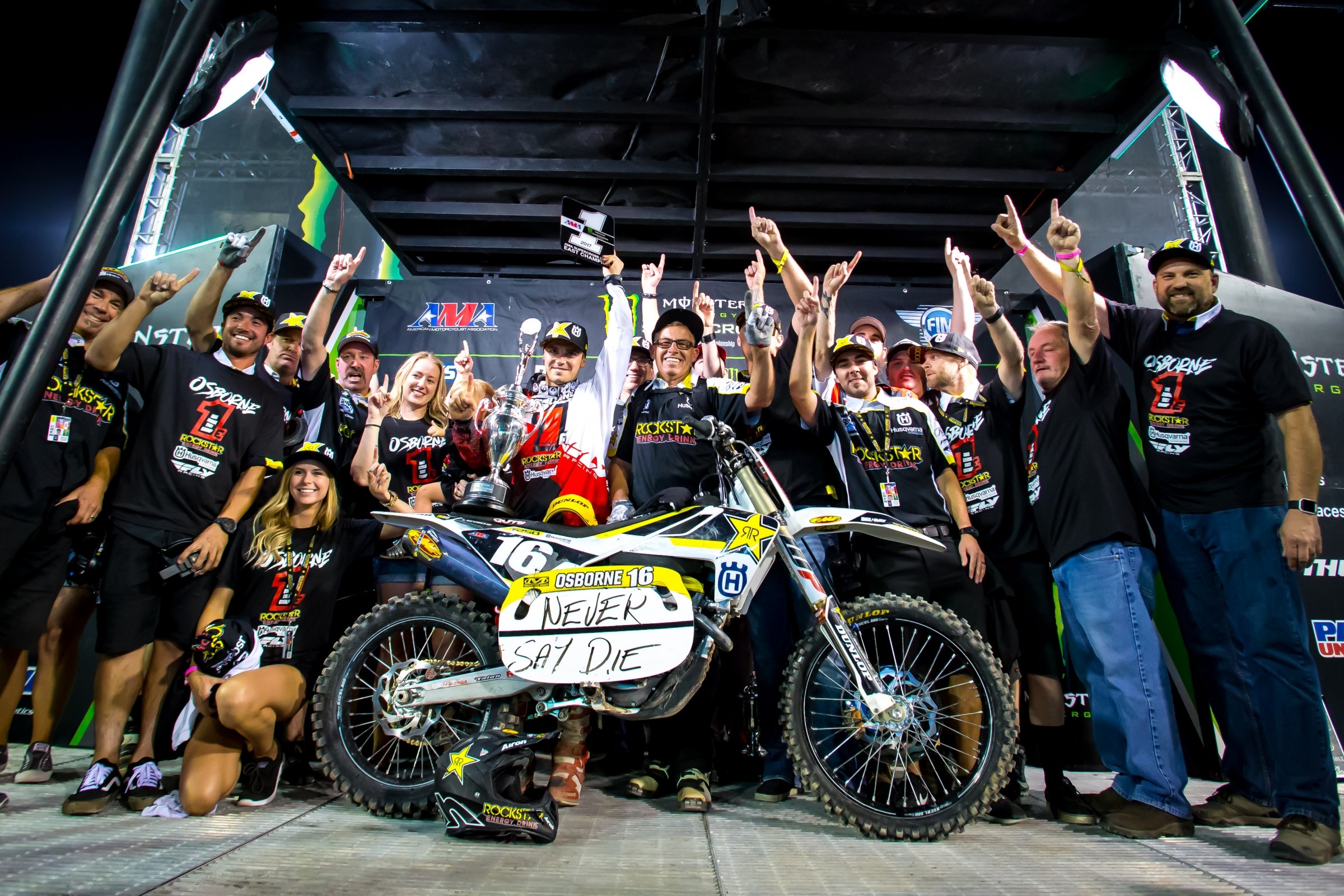 What a boring weekend of racing, right? Unbelievable. With all of the suspense leading up to the weekend between Ryan Dungey and Eli Tomac and one point separating three riders in the 250 class, I was secretly expecting a letdown on how these titles would shake out. Man, was I wrong! Zach Osborne’s come-from-behind ride will go down as one of the most memorable 250 races on record. As I prepared to write this edition of Breakdown, I couldn’t decide on exactly what to examine. There were so many topics I was getting sensory overload. I decided to take a look at the individual lap times from the key riders in the 250SX East Region and how those told the main event tale.

For the 250 class, after Jordon Smith crashed spectacularly, it came down to a last lap collision that sent Joey Savatgy into the dirt and Zach Osborne into his first championship. How that collision became possible, though, was nothing more than a miracle.

As the laps unfolded, Osborne had a huge task in front of him. He had to make up somewhere around 20 seconds if he wanted any chance. He systematically put together consistent laps that saw him within five or six seconds with a couple of laps to go. On paper, the math didn’t add up. Savatgy was losing time on most every lap but not enough to close five seconds in two laps. On those last two laps, though, Savatgy got stuck behind Hayden Mellross and in doing so, put in two of his three worst laps of the main event. In contrast, Osborne was locked in and charging. Osborne put in his third best lap on lap 14 and his fifth best lap on the last lap.

On lap 13, however, Osborne had to pass Mitchell Harrison and in doing so, was pushed a touch wide before the triple. In an effort to make the pass stick, Osborne landed the triple to the inside and blocked the double, forcing both riders to roll it and enter the whoops from a standstill. It was a very, very slow couple of corners for Osborne and as it was unfolding, I thought it would be the end of his chances. Osborne was putting in consistent times in the 1:07-1:08 range while Savatgy was turning in 1:09s. The gap was closing down steadily, but I was almost certain that Osborne’s 1:09 due to the Harrison pass would be too much to overcome. He basically lost a full lap, or a full second, that he would have otherwise gained.

On lap 14, though, Osborne dropped the hammer and Savatgy was unable to even put in his normal lap because of Mellross in front of him. Osborne turned in a 1:07.876 compared to Savatgy’s 1:10.236, a 2.4 second closure. That was huge for Osborne’s hopes on the final lap. Mentally, lap 14 may have been the crucial piece of the puzzle. Even then, Osborne had over two seconds to make up entering that final lap, but at least he could see him.

Just like a predator chasing prey, the intensity picks up as the strike nears. We don’t have a way to figure out Savatgy’s final lap time as the collision changed everything … BUT, we do have the segments to tell us how that lap was going. In the first three segments, Osborne had made up 1.03 seconds, leaving a full second to close down in the final segment which is more than most would assume possible. On average, Savatgy’s final segment time was 16.98 and Osborne’s was 16.43. That’s half a second and a lot for one segment, but not enough when you need a full second to even reach him, let alone pass him.

For Savatgy, it really came down to those two whoops sections and if he could maintain enough of a gap to prevent any last ditch effort from Osborne. Even if Osborne was able to get somewhat close, if Savatgy knew he was back there, he could draw a super tight line and protect the inside. Unfortunately for Savatgy, none of that happened. Osborne blitzed through both sets of whoops and as Savatgy went to the berm, Osborne aimed for Savatgy’s apex and the rest was history. Osborne cut down a seemingly impossible gap and found an angle to take his shot. Had Savatgy been even five feet further ahead (less than a second), it would have been too late. A whole season of racing and the title was decided by tenths of a second.

It’s easy to look at the lap times and see Osborne steadily catching him. The unanswerable question was why was Savatgy off the pace? Was it nerves? Did he think he just needed to hold his spot? Whatever the case, he was definitely not riding to his full potential. He won his heat race and was fast all day. Riding near the back of the top 10 and moving backwards is not indicative of his ability.

I think in the end, he was a victim of his own lack of urgency. He saw Smith crash big and suffered his own tip over on the second lap. He surely knew Osborne was way back but didn’t think he could make up enough time to change the outcome. How could he expect Osborne to make up that much time in the few laps left? The easy answer is he shouldn’t have been able to. Savatgy was stuck behind Mellross and his lap times suffered. He dropped from his 1:09 into the 1:10s and the whole dynamic changed. Osborne found him in his sights and clicked off a 1:07. It was a cataclysmic turn of events for Savatgy and his team. For Osborne, it was a windfall of epic proportions. Racing is never short on emotion and regardless of which side you were on, the 2017 250SX East Region title surely delivered on excitement.