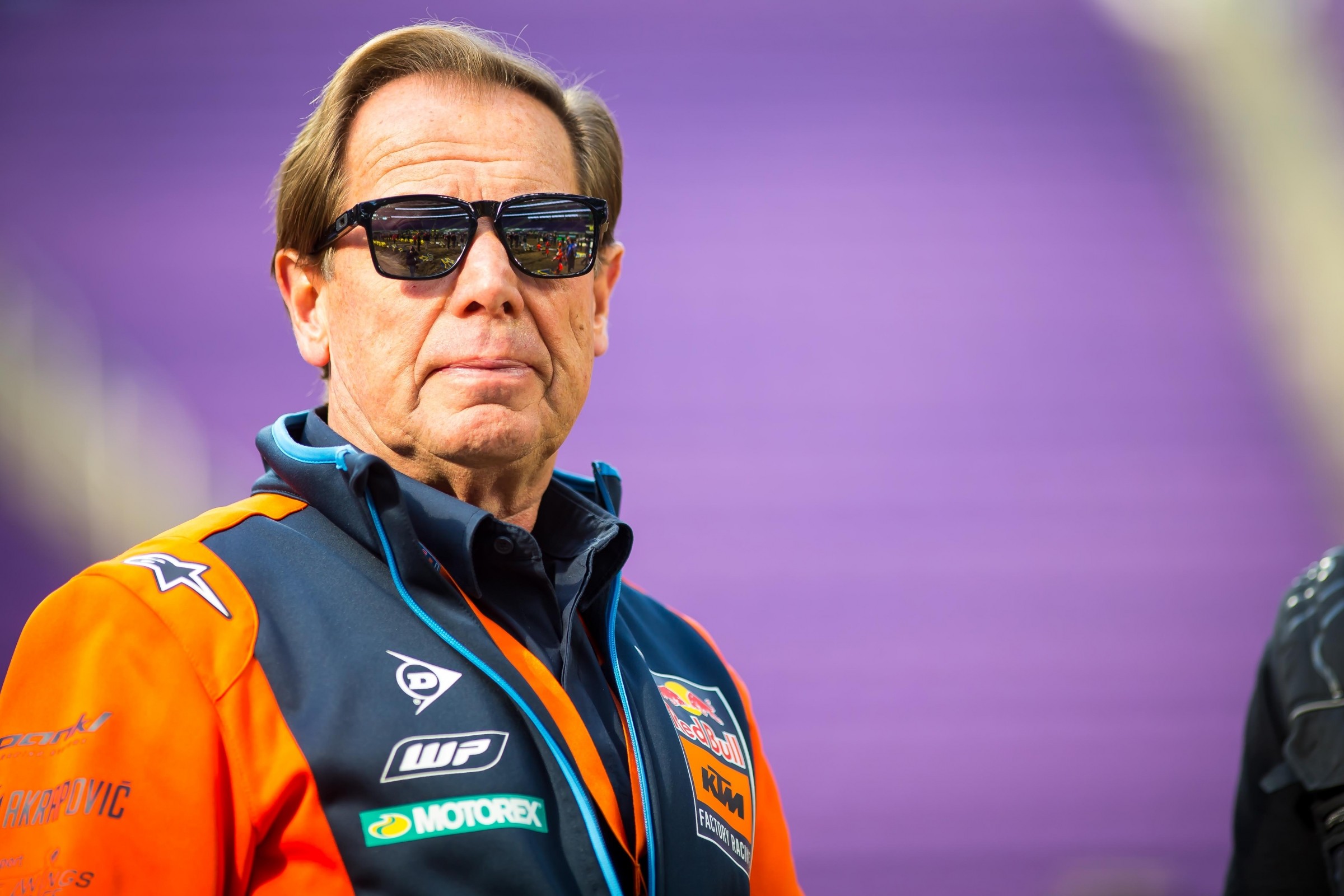 Let’s get this out of the way: no one at Red Bull KTM is ever going to straight-up admit that Marvin Musquin moved over for Ryan Dungey on Saturday night. Not going to happen, and predictably both Ryan and Marvin denied it in the post-race press conference.

We didn’t expect team manager Roger DeCoster to cop to it either, but we knew The Man would provide some insight into the dynamics of having so many fast riders and bikes at the front of the pack (KTMs and Husqvarnas swept the top five spots over the weekend), and having one of them trying to score max points and win a championship.

Racer X: It was a tough race for Ryan last week—he had the lead and Eli, who he is battling with in points, comes from almost last to catch him and win. So how did you guys keep Ryan’s spirits up this week? How do you get him to come back out here for these last two races still confident and focusing on a win?
Roger DeCoster: Well, we talked to him, and we had to keep reminding him that he’s done it before and he can do it again. We made small changes with the bike setting and we were able to get better from first practice to second practice. One reason was, we had a small problem with an o-ring breaking in his forks in the first practice. At first we were thinking “Oh, Ryan is overthinking things” but it turns out, it was a 20 cent o-ring.

No oil coming out or anything?
No oil, it was inside, with the shims, and it reduced the dampening to pretty much zero in one side. So it rebounded really quick and the bike would lift. He was right about that, and that made him feel better. So we went back to our spare base setting, and it was good, he had the fastest time. It appears there’s a big effect between Eli and Ryan on where they finish in practice. If one guy finishes on top in the practice, the other guy goes down [emotionally] and we noticed that last week also.

You’ve been with Ryan a long time. He’s admitted he does much better now dealing with these highs and lows than he used to. What have you seen?
He’s much calmer. He doesn’t lose it like he would do sometimes before. It’s just a typical thing when you get older, you get calmer, you take some things with a grain of salt. You don’t overreact as much. But also, you know, on a bad day, Ryan has always been capable of limiting the damage. That’s always a big factor in these championships. The best riders, they can always win on a good day, but when things go bad, will they finish top five instead of top 10? That usually has a big effect on the championship.

Well, looks like those few extra points are having a big impact right now.
It’s not done. The same thing that happened to Eli can happen to Ryan next week. Eli’s a tough competitor.

Talk about having so many good guys on the brand—and not just tonight, but all year—he’s been battling Marvin, and also Davi [Millsaps] is good and Blake [Baggett] is good. What has that stress been like, trying to manage all that? Or do you maybe not manage it at all and just let them ride?
The advantage we have is that we know the settings in all of the KTM group’s bikes, so it allows me to compare each bike and see how it works. Kind of like car racing, and that’s why the top NASCAR teams have three or four cars so they can compare settings. That allows you to not to too far off the main line. That’s an advantage. And today, for whatever reason, it was good for our bikes, finishing top five with all five from our group. They basically all have the same suspension with very small differences front and rear, and the engines are the same, just small things with rider preference. Ian [Harrison] and everyone over there does a great job of tracking it all, what everyone has, because sometimes it’s hard to follow what everyone does. They’re all a little different on mapping and how they ride—some guys rev it more with less throttle, and some use more throttle but less RPM. To make some sense of all of that, that’s our advantage, I think. I’m lucky that I have a really good crew and they all work well together. There’s no secrets. What’s available to Ryan is available to Baggett or Marvin or Davi.

From what I know about this sport, such cooperation is actually more rare then people might think.
It’s really difficult. You have the mechanics, they want they best for his own guy, they’re a team within the team, almost, and it’s unavoidable. The mechanic works closely with his rider and he will feel like it’s him winning, a little bit, that’s understandable, but the thing we strive for is to keep a team atmosphere. That’s the thing today. Marvin, the first few laps, he was more concerned with not hitting Ryan than he was getting his own win. They’re such good buddies and Ryan has helped Marvin many times and vice-versa, they are working together all the time. It’s a very difficult situation for them.

Did it get stressful for you? Watching them battle?
Yeah. But a good stressful! When that’s happening between first and second, that’s a nice stress compared to 10th and 11th or something like that.

Yeah or if Eli was gone and they were battling for second, that would have been different. Because Eli was in the lead at one point.
Yes, yes. Eli was very aggressive all day from what I could see. Then, watching Marvin and Ryan together, it felt like the race took one hour instead of 20 minutes!

So, have you had meetings about all this? Do you sit everyone down in a room and decide what to do to help Ryan?
No. The only thing I say is, before the race, I say “Don’t race each other harder than the competition. And at the end of the championship here, please don’t take out Ryan. Give him some space. Just race.” That’s all I’ve ever said.