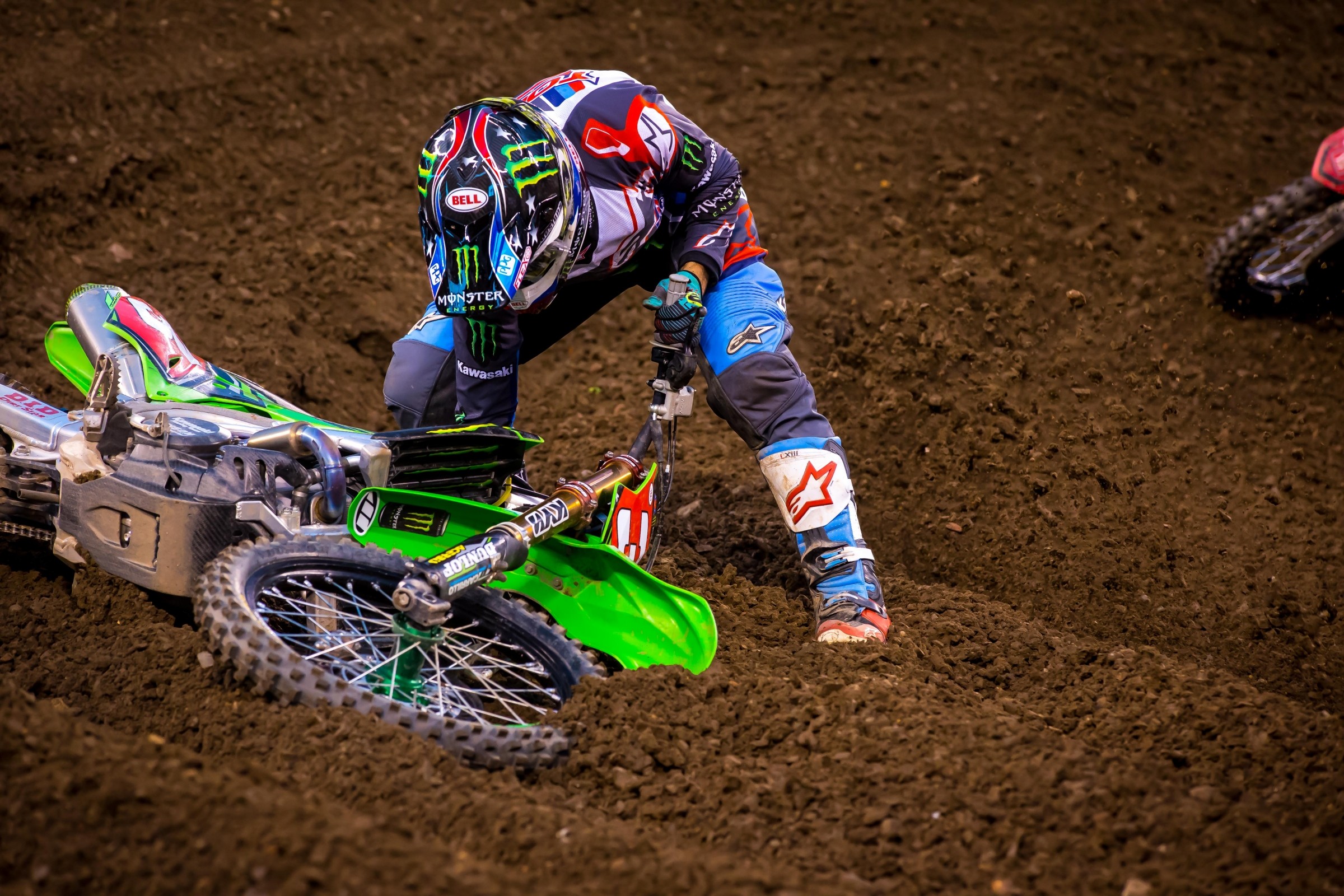 3 on 3 Questions from East Rutherford

1.) What to make of Tomac on Saturday?

Jason Thomas: I still don't really know. He rode really poorly all day (compared to what we are accustomed to seeing). He just seemed like he was off. His qualifying session wasn't on par with his typical speed and then his heat race was a complete mess. He made more mistakes in that single qualifier than in two months prior. Then, in the main event, I fully believed he was on his way to an easy win and then disaster struck. Even then, I still thought he would jump up and set off like a madman after the leaders. And that was maybe the weirdest part. He got up and didn't seem like he was in too much of a hurry, struggled to get his bike restarted, and then couldn't find the pace. He made mistake after mistake trying to move forward and then jumped completely off the track while trailing his teammate Josh Grant. I don't know if it was a mental struggle, a physical battle against a brutal track, or just a weird off day at the worst time. There is no easy answer to this one.

Jason Weigandt: That was so strange, and I can't just chalk it up to pressure or choking. Eli was in a pressure spot last weekend when he entered turn one in 20th, and then proceeded to log one of the all-time great rides. Doesn’t that prove he can be clutch? After he crashed in East Rutherford, he was basically as far back as he was in Salt Lake City, and that didn't phase him seven days earlier. Why would it now?

So I'm thinking something else was up. When he crashed, he got up so slowly! He didn't really rush it. Then he had a ton of mistakes trying to come back through. Makes me think he was having an off-day in general, or something broke on his bike, or he wasn't feeling good all weekend. He was never the Salt Lake City Eli Tomac in East Rutherford, but I don't believe it was only because of pressure, because the pressure last week was just as immense and he was fine.

I think something else was off, but we'll probably never know what it was.

Steve Matthes: When confronted with something like this the obvious answer is the best one. He just wasn't comfortable with the track and his bike as he has been in the past month. East Rutherford was somewhat like Seattle where he rode amazing but on the other hand, it wasn't sandy at all like Seattle. You couldn't explode the berms like in Seattle and to a lesser extent, Oakland. It was tighter than those tracks as well and he just wasn't feeling it. Nothing to do with pressure of the red plate like some people said. I think last week showed that he's not affected by that and he's won multiple titles in the sport. He just didn’t like the track/his bike as much—it's that simple.

Like JT said, his qualifying wasn't great, he crashed hard enough to bend bars in that session, and yeah, that's it. He had a few near death experiences after picking his bike up that made everything worse. In talking to the riders in the press conference afterwards (and let me again say that I think having press conferences is great for our sport except why aren’t the athletes that are the ONLY story forced to speak afterwards. Both Dungey and Tomac have skipped out when they were THE stories from the race. If we're going to be professional, let's actually be professional and talk to the media after the bad races, you know?). They said that you could only go so fast on a track like this and trying harder made things worse.

Thomas: This one is easy to answer. Marvin wanted to prove he was the fastest guy and deserved the win bonus but knew he needed to give Ryan the points. His pride and motivation pushed him to pass Ryan but his friendship, employer's wishes, and general wisdom guided him to make a "mistake" on the last lap. Marvin knows that KTM needs a title above all else and Marvin is a part of that effort.

Weigandt: Wow, what a clutch ride for Dungey! Last lap pass! Digging deep for the points!

Okay, Marvin moved over. That's obvious. I'm not outraged, though. KTM earned the right to help by spending the money to have a lot of other good riders on good bikes, be it Marvin or a whole second team with Blake Baggett and Davi Millsaps on Rocky Mountain ATV/MC-WPS-KTMs.

When Marvin started attacking Dungey, and then passed him, you could collectively hear 40,000 people saying "What???" Everyone knew it would have been strange for Marvin to beat Ryan in that situation. Even if you don't like it, the scenario was obvious. I don't think Marvin had much choice, and in fact, I don't even think KTM had big meetings about it. Marvin would know he shouldn't beat Ryan even if no one told him. (Had they actually planned something, maybe he would have pulled it a little more slyly than just moving over on the last lap.)

I understand people are mad. Dungey's season hasn't been amazing while Tomac has logged some epic rides, and I think a lot of people just don't like the optics of Dungey appearing to back into the title while Tomac was out there going for it every weekend. So this just adds fuel to that fire. But if Marvin had just gone on to win it on Saturday, would anyone have thought "Yeah, that makes sense?”

Matthes: Marvin said he was frustrated with making so many mistakes out there and that allowed Dungey to catch and pass him, so that's a bad break for sure. I thought he had it! As I said on the review podcast, I'm 100 percent fine with what Musquin did. That's why if you're KTM, you spend all this money on a team and heck, you even buy another bike brand and field a team over there also. It wasn't like Musquin went and T-boned Tomac, that's a team tactic that I can't endorse. Instead he just went slow the last few laps and let Ryan by for the win. Big deal. Why are all you people mad? I doubt those three points are going to matter anyways. Calm down.

Thomas: Just answering this question has me rubbing my hands together a la Ryan Villopoto in a great trash-talk session. This is basically winner takes all, even if one of these three don't actually win the race. They all just need to beat each other and that will decide it. I can't imagine a scenario where one of them aren't somewhere in the top five so I don't think the single point will matter. Zacho seems to have the speed edge, Jordon has the starts dialed most consistently, and Joey is the defending Las Vegas 250 Showdown winner. Take your pick. Joey looks to be a bit beat up from his crash last weekend, Jordon is still young and inexperienced in title scenarios, so I will pick Zacho to come through.

Weigandt: This was the break Osborne needed. I feel like he's been the fastest guy in the 250SX East Region nearly every week, but he needed help to make up points. He got it and now that it's down to winner-take-all I'll put my money on him. I don't think the Vegas track will be as good for him as New Jersey's rut fest, but I think he's been better, overall, than the rest of the guys where he can get this unless he really screws something up.

Matthes: I don't know what's going to happen (duh), but I do think the 250SX West Region guys are going to be on a bit of a cruise here so the 250SX East Region guys will have the track to themselves somewhat. There's so much motivation for the three East Coast dudes that I think they'll be able to sort this through themselves. The longer main events help out if someone gets a bad start so I think we'll see some great racing with the three title contenders but as I've said all year long, Osborne has been the only guy to consistently be able to pass all the title contenders, he's got the most wins in the class so I'll take the #16.