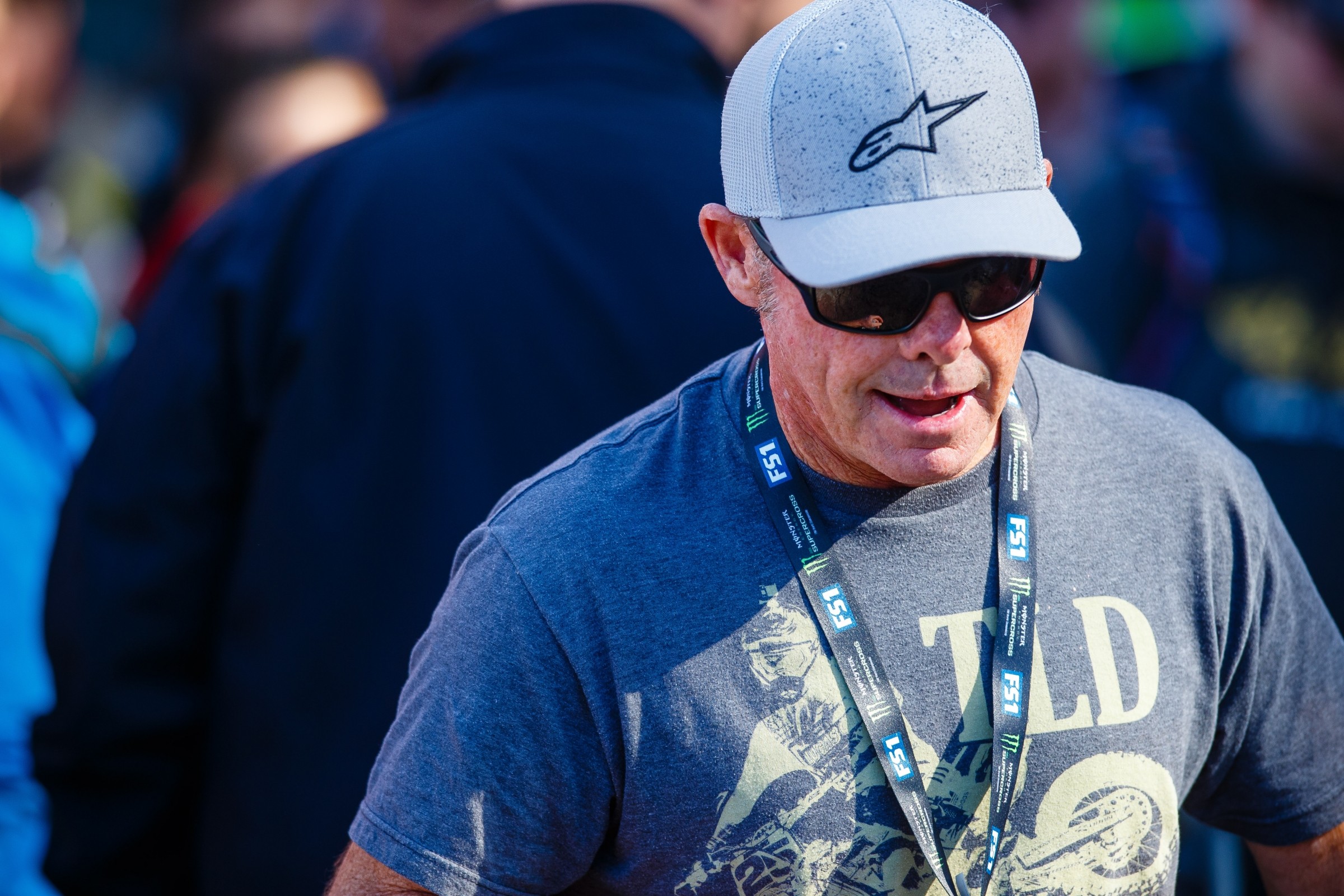 Jeff Ward is one of the all time greatest motorcycle racers in the world. His first brush with stardom was his 1971 appearance in the iconic movie On Any Sunday. Wardy was just a small kid and was shot doing his epic stand up wheelie. From that point on, he would continue to race, and turned professional in 1978 and raced all the way through 1993. He was the first rider to win all of the AMA Motocross Championships (125, 250, and 500cc), and the AMA 250cc Supercross title.

After retiring from racing in 1993, he turned his attention to IndyCar racing, where he landed one win (in Texas) and finished a close second at the Indy 500. After retiring from that sport, he moved back to two wheels and raced Supermoto, where he again would win several championships.

Jeff Ward is now 55 years old, and is still going strong. In fact, he is still in such good shape that he has decided to become the fourth and final member of the Legends of the Road team, along with David Bailey, Doug Henry, and Micky Dymond. The team is competing in the Race Across America (RAAM), which is regarded as one of the nastiest, grueling bicycle competitions there is.

The team is racing to raise money for Road 2 Recovery, which assists injured professional action sports athletes. You can donate here.

Racer X: Okay, first question is, how did your participation in this group come about?
Jeff Ward: Well, I knew Micky did the race with Ben [Bostrom] and Dave [Mirra] back in 2014. Being an avid cyclist myself, I was following it. I’ve been doing a ton of mountain biking in the last five years, as well as a bunch of races. And I was thinking earlier this year, or maybe the end of last year, I was thinking about doing the RAAM. I texted Micky to let him know, and then ironically, the very next day, he was talking to David, and it all kind of came together. I had no idea that David was doing it, or into doing it. So then David called me, and we spoke. David is basically the guy who has put it all together, but the timing of my text to Micky was pretty funny. But that’s how it all fell into place.

So are you ready for this? Its pretty gnarly from what I hear!
Yeah, I think so. I am certainly up for challenges. I’ve done a few 12-hour mountain bike races as well as some long distance solo stuff. It’s just a matter of putting in more miles and seat time to get ready, and then making sure you have enough fuel to eat, and then just do it day in and day out for seven to eight days. As it is, I ride every day now already. But the outside elements will be our biggest obstacles, including weather and other things you can’t predict. But I feel confident about it. But honestly, I don’t have any reason to complain, with David and Doug doing the handcycles. The things they have to contend with make it much harder for them. So I have no excuses.

Micky Dymond asked me if I had done anything for 24 hours, to which I said yes. He then said to then multiply that effort times eight or nine (days), and that is what RAAM is like. Knowing how I felt after staying up for 24 hours, I could not imagine how hard it is.
Well, if you sit and think about it, it does scare you. And I know how far it is to ride from Newport Beach to Corona, and that’s hard—let alone to go from Oceanside to Annapolis! But the way we have it set up, and riding in segments and whatnot, there is a method behind it. Hopefully that program is doable. I can’t imagine doing it solo, that is a gnarly deal. I have driven 30 hours straight, but you do get tired and you can take a catnap. There will be times where we can rest and times where we can’t. Hopefully we don’t get sick, but that happens as well. Micky said there will be times when you are asleep and someone knocks on the door and says, “Hey, someone is sick or a bike is broken, you need to be ready in 20 minutes.” I do know that Micky and I will be doing some of the climbing, we are maybe three times quicker that way, but the schedule can always change in the mountains. It will be a tough battle, but David has done the Ironman and he knows what it takes. We have all been friends forever, so that part of it will be great. It’s certainly a once in lifetime experience. And even though he has not done a ton of events like this, Doug is Doug and he will push through whatever it takes. He is one of a kind, and always trying to find something better in himself.

All of your efforts are to raise money for the Road 2 Recovery. Tell me a little about that.
With Jimmy Button, as well as some of the guys that I have raced against and that have gotten hurt, raising money for them is one of the main reasons I’m doing this. We certainly are not getting paid for this, but it hopefully is going to bring in some more money for the guys who get hurt in our sport. And they are not just motocross; they also help all extreme sport athletes. Plus, we can show people that have been hurt that you can still challenge yourself and do stuff like this. For me, motocross is family, and that this is what it’s all about. The sport has been my family, and knowing what Doug and David have to go through, anything I can do to give back, I want to do.

Changing gears here, what are you up to besides riding your bicycle?
Well, I am still working and coaching Cole Seely. He is doing pretty well, but has recently had a bad few races. We were in third for the points, but then we had some bad races. It is kind of a mid-season slump that set us back. But overall, we are in a good position. Now it’s time to transition to the outdoors, which is hard while you still have to race supercross. Personally, I think this part of season is hard for guys to find motivation, and mainly due to fact that you are riding outdoors and testing for that, and then you have to focus on supercross. But Cole has really improved this year, and is much further ahead than last year. But you know, it’s tough once you move up to the 450. Look at guys like Marvin [Musquin] and [Jason] Anderson, it can take years to put it together. Although, [Eli] Tomac seems to be the exception. But next year I think you will certainly see a few more guys in the hunt.

What is your opinion on what Ken Roczen is facing?
Man, I don’t know. That was a bad deal, but it could have been way worse. I don’t know how bad his injury is, I am not really close with his group, but he is going to be coming back. It is just unfortunate for him, unfortunate for Honda, and even the fans and supercross in general. Kenny is such a great personality and racer, so everyone lost a little with him being out. It’s always tough to see that happen and with such an effort being put into it. Time will tell how he bounces back. Assuming everything heals, I think he will be fine and be back on top of his game.

How is your family doing?
They are doing well. We have four kids and my wife Candice and I are still living in Newport Beach. My oldest son, Brandon, is in the Army. He is serving in the intelligence division, and has been to Afghanistan a few times. He is going on two years in the Army, and he is all about the computers and intel around them. He was on the base where those guys sneaked on and blew themselves up just recently. Being over there is a pretty gnarly deal. He is doing really well, though. My son Ayerton, he is 19 and is into the racing. He is riding the B class and trying to make it to Loretta’s, which is not easy. Some of those kids are so fast, it’s crazy. But he is good rider and has made some great friends. He is also going to college locally while racing. He also has a twin brother Alain, but he is not that into riding. Maybe just for fun, but he never had a passion to race as a pro. He is going to college as well. And then my daughter Seinna, she is 17, and is off to college in Ohio.

I heard a rumor that you have a close connection to all the factory supercross test tracks in Corona?
Ha! Yeah, well, my father-in-law owns the Corona Clay Company. And Corona Clay owns all the land where the factory test tracks are built. I think he has around eight total tracks out there. The funny thing is, I knew him like 6-7 years before I met Candice. I think I met him in 1981, when we used to go out there to test. He owns some other land out in Riverside County, but it’s not like I am out there working on the tracks. I don’t really have much to do with them. My wife did just do some industrial building on a portion of the land, but it wasn’t anything to do with the factory tracks.

You had a profound career. What are some of your best memories?
Well, honestly, all of it was great. My supercross title was big, but I think my biggest was my first 125cc National Championship. That one was the hardest. But overall, whatever I get myself into, I always gave it 100 percent. I think that’s why I made it in car racing, as I was just 100 percent focused on getting better. And car racing is much more money driven than talent driven, but there is still a learning curve. Overall, I am just super proud I gave it all I had. Heck, I am still giving it 100 percent today. This RAAM deal is no different. I am putting in the miles, doing the work, and it is certainly not half ass. I am training all over again like I did in my 20s. Being 55 years old, I’m no spring chicken.

Fifty-five years old. Wow! That’s amazing that you are doing this. And, I think that means that you qualify now for AARP?
That’s right! I can go to the afternoon movies for $1.50 or get the senior menu at Denny’s with my discount!