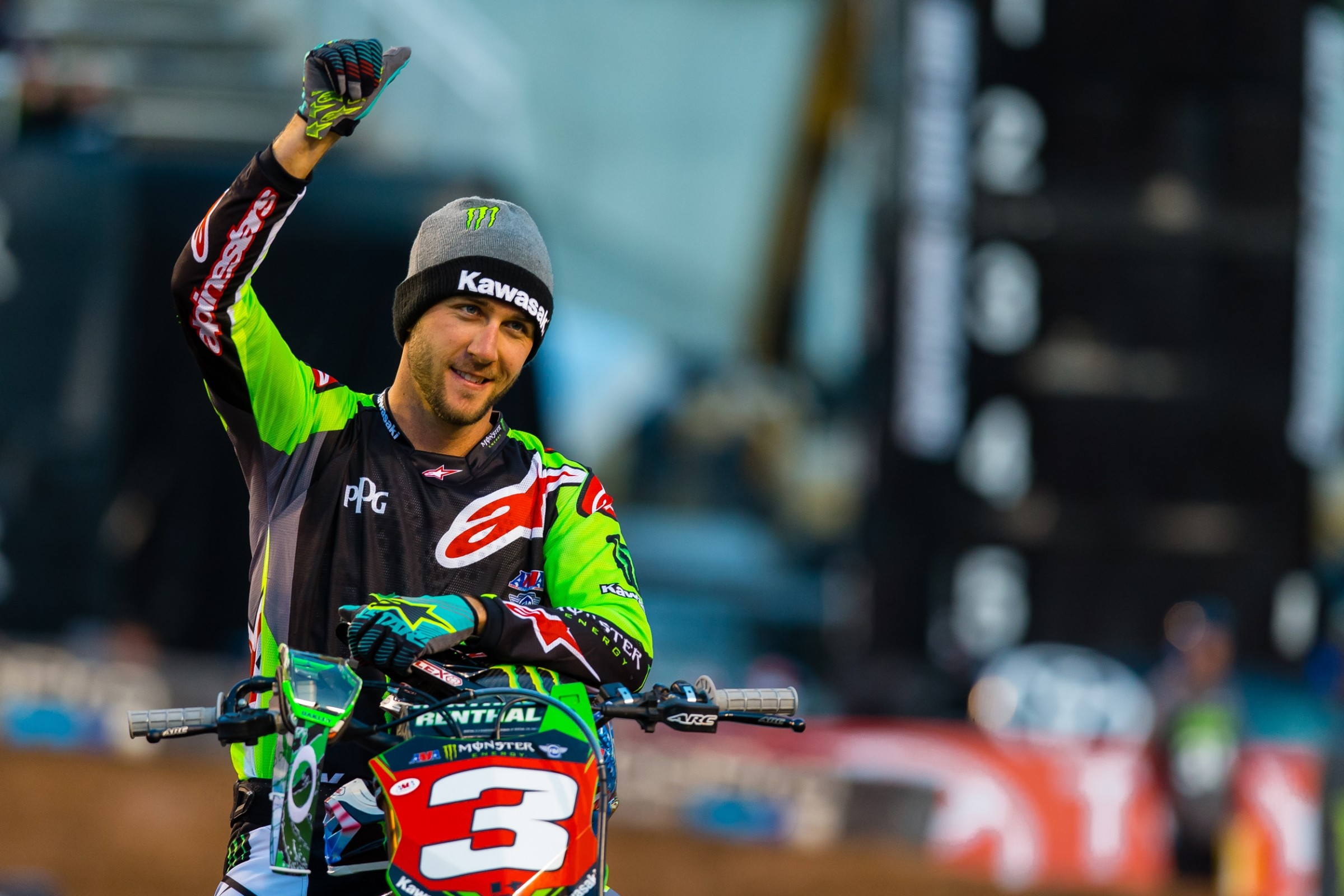 Racer X: If you pull this off, whatever change you made between rounds three and four will be known as one of the greatest turnarounds in the history of this sport. What the hell did you do between rounds three and four?
Eli Tomac: Basically, all we did was make the bike rideable for me. It was rideable at the practice track before that, but I was getting tight at the halfway point in the races. The changes we made, I was finally able to ride the whole 20 in the race.

But how hard is it to go from way off, to hitting the target on the bullseye in one week?
Well, the problem was I was getting major arm pump. When you get arm pump you’re literally just riding around.

You were able to immediately fix whatever caused the arm pump.
Yeah we got, I don’t want to say lucky, but we were able to solve the problem in one week.

So heading into Glendale, did you feel like you had it solved?
No! [Laughs] Because you never really know until you try it in a race! I was all pumped on my bike during the off-season. I was pumped that we had left my bike alone since the beginning of Monster Cup. I was able to just do laps and laps and laps, I thought I was away ahead. And I was, as far as my body. We did so many laps, I felt way ahead, for sure.

Was the problem that the race tracks didn’t really ride like the practice track?
I don’t know for sure. For some reason, these tracks are always a little tighter feeling and obviously quite a bit rougher. So we had to make it work in those conditions.

Was there any magic in Arizona? I know you went out there before the Glendale race and hit those tracks. Was that something to do with this.
Well, I don’t know. At that point we were going to have to try something. It was good that we got to go out there because of the rain in California. We got on a different surface and track, and it was a good lesson learned for everyone.

I heard those tracks were way more beat up than a factory test track. That’s true?
Oh yeah, they were hacked. First day was a hack track, I said.

Crew chief Mike Williamson: Can I answer that? Let’s just say he was a lot happier on the hack track once he had the bike where he liked it.

How fortunate was it to have gone and ridden those different tracks?
I don’t know because we were going to have to make changes anyway. We would have gone to our test track and gone testing anyway. But the timing of being rained out in California, and having to ride those tracks, it worked out just about perfect.

Okay. How much did these guys rally around you to help make this happen?
We were at the point where we had to try something. We were totally 100 percent fine at the practice track. I thought I was fine at Monster Cup. Even after the first race, I just thought the arm pump was round one jitters.

Williamson: I think we knew the tracks were different when went back to the test track after Glendale, and the bike didn’t work so well there.

Ah okay, so you had to adjust your riding for the test track? Or do you just deal with your bike not working there?
Williamson: I think we’ve now built in enough adjustability where we can do both now. We learned that when there’s 12 90 degree corners on a race track, you’ve got to change something to match.

Did you change much after round one or two?
Not really because I felt good at the test track. Then all of a sudden I would get arm pump and be a complete mental case at the races.

How hard is it for everyone on the team to keep their cool in this situation? You can’t quit on each other or you’re not going to solve it.
It’s tough! It’s really tough because you don’t know what to do or how to solve the problem.

Did you know going into Glendale that you had it solved?
Not for sure, but we rode for three days out there in Arizona, and by the third day we were motoing down and feeling good. It was so much better that whole day than the previous rounds that I knew we were onto something.

Okay team guys, you have to walk away while I ask this question. You’re not going to like this question, so go away.
Williamson: Eli can handle it. He’s pretty good.

Okay, Eli. You ended your run on your previous brand of bike riding incredibly well. Maybe there were ups and downs throughout, but at the end, you were awesome. Now we know you’ve gotten back to that level, if not even better. But it had to be a little worrying after you had made the switch? Were you searching?
You’re searching, but at the beginning of last year I was still recovering from my shoulders, anyway. So I didn’t know exactly what was the right thing to do, or the right feel.

So you had to chase it the whole year?
To be totally honest, my shoulders, they would fatigue throughout the week and throughout the day. I felt that to the end of supercross, until I got those few podiums at the end.

Did it hurt even into outdoors, just because you had missed so much time?
Yeah, the beginning maybe a little bit. My shoulders were pretty freaking weak. Even just missing all that off season time in September and October. I mean, first time I even hopped on a stock Kawasaki was after Monster Cup that year.

So you never really had anything to gauge off of last year?
Maybe those last two GPs. They were good outdoor races. I hate to use excuses. I hate to. But I think if we had felt like that part way through the Nationals, we would have been fighting at the front a whole lot more. Even just the riding. When you’re only at 90 percent strength, it’s hard to set up a bike to really go for it at the races.

So then this off-season you think you’re good, and the first three races you don’t get the results. That had to sting.
It did sting.

Williamson: I still disagree with your previous question. You can’t compare how good he was doing in 2015. Look how good he’s doing in supercross!

First of all, Mike, I told you were weren’t allowed to be part of that question. [Laughs] Yes, but all I’m saying is, the last time you were seeing on the red bike, you were going really, really fast. I hate to tell you, people remember you winning Hangtown by a minute and a half. That’s a high standard and people don’t forget that ride.
Yeah but that’s motocross. We’re talking about supercross. That domination in those motocross motos, we were even close to that in supercross that year.

Yes, but bottom line is, people remember you going really fast on that bike, and then you switched.
Yeah, but it put me on the ground a lot. I was sick of it.

There we go. That’s the part of the thought process we all wanted to know. Excellent I got my answer. Anyway, back to this year. Did you ever think going into round four you were about to shoot right up there?
In my mind, yes, I knew we were better than we were doing. But it stung, yes. I don’t even know what I finished at round three, but it wasn’t great.

You’ve re-signed. Things are really good now.
Yeah, the best it’s ever been. This is the best I’ve ever felt, it’s not even close, actually. There’s no comparison. I won three races on the other brand the last time in supercross. This year, we’re doing work. The first year on this bike, it was all skewed with the shoulder injury.

Is this what your vision was all along?
It was. This was my dream.