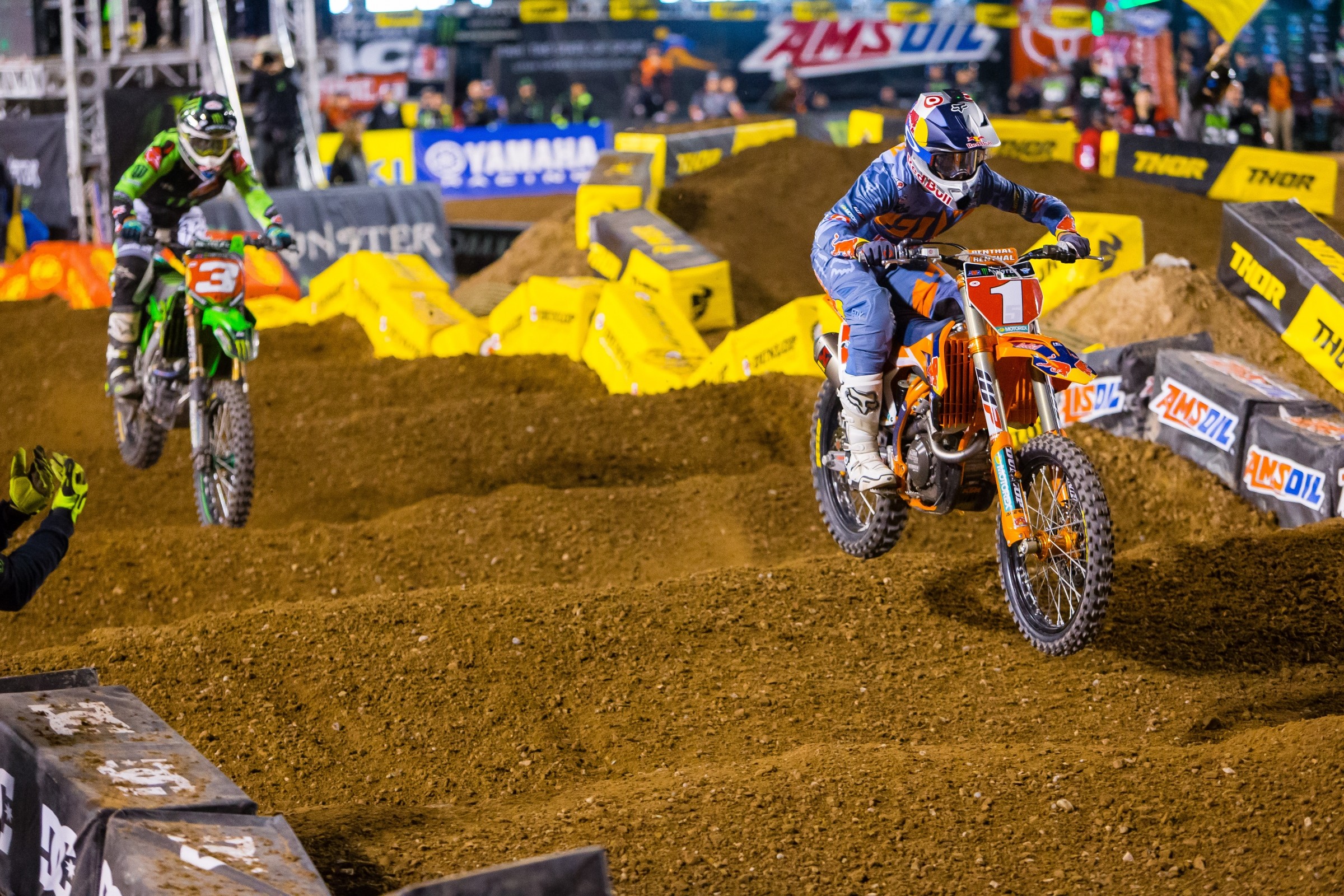 Eli Tomac's ride in Salt Lake City was as clutch as they come. Going into the race tied in points with Ryan Dungey meant that whoever finished better would walk away with the points lead and a lot of momentum to finish out the season. Tomac got a terrible start, rounding the first turn very near to the back of the pack, and with Dungey getting into the lead early, it looked like it was going to be a damage control type of night for the #3.

Instead, he hammered his way through the pack and on the 18th lap of the main event he had passed Ryan Dungey for the lead in the race and the championship.

Let’s dive into the lap data to figure out how this race was won and lost with this week’s Sign of the Lap Times. First, our traditional lap time charts.

The big talk after the race was all about Tomac's whoop speed. It was mentioned on our Fly Racing Racer X Review Podcast that Tomac's average time through the whoops was 2.5 seconds faster than any one else through the segment, because that's what the AMA stated. Our own Steve Matthes even tweeted about it.

DO YOU KNOW HOW HARD IT IS TO GO 2.5 SECONDS FASTER THAN ANYONE ELSE IN A SIX SECOND SEGMENT IS?????

A few people, including David Vuillemin, replied to Steve's tweet saying something was suspicious about Tomac's segment time, so I decided to do a little amateur investigating.

Below you'll find the segment in question (segment two) highlighted in green. There are transponder receivers buried in the sides of the jumps at the beginning and end of the section.

According to the AMA, Tomac made it through this section within four seconds a total of eight times. And if you look at the clip below, I think he registered in the four second range because he was getting so close to the edge of the track near the end of the whoop pad, that he triggered the transponder early, right in that four second range. (Note: I know this method of timing I'm using isn't completely accurate, but it'll do.)

Here's how long it actually took Tomac to get through the entire section.

And here's how fast he would have to go to complete the section in the fastest time registered by the AMA—4.246 seconds.

If you dive into the segment times you'll notice that the time Tomac saved in segment two by clipping the transponder early can be found in segment three. I've highlighted the instances where this happened and whenever the second segment was finished early, his third segment is significantly longer.

This isn't saying that Tomac wasn't wickedly fast through the whoops. He was. If you go back and remove the times in the four second range, you end up with an average of 6.72 which is still .347 seconds faster than the second fastest rider Marvin Musquin's time of 7.067.

Even though the difference might not be as pronounced as we once thought, it's still pretty clear that this section played a huge part in Tomac winning this race. It gave him a perfect spot to pass while working his way to the front and he was still a half-second faster than Ryan Dungey in a seven-second segment. That's HUGE.

If you look at segments one and four (the rhythm sections before the finish and two turns after the finish) Dungey was actually a hair faster than Tomac, but again, he lost all that time in whoops. To finish out, take a look at the top 10 average times for segments one and four. (Segment three isn't included due to Tomac's times not being accurate.)