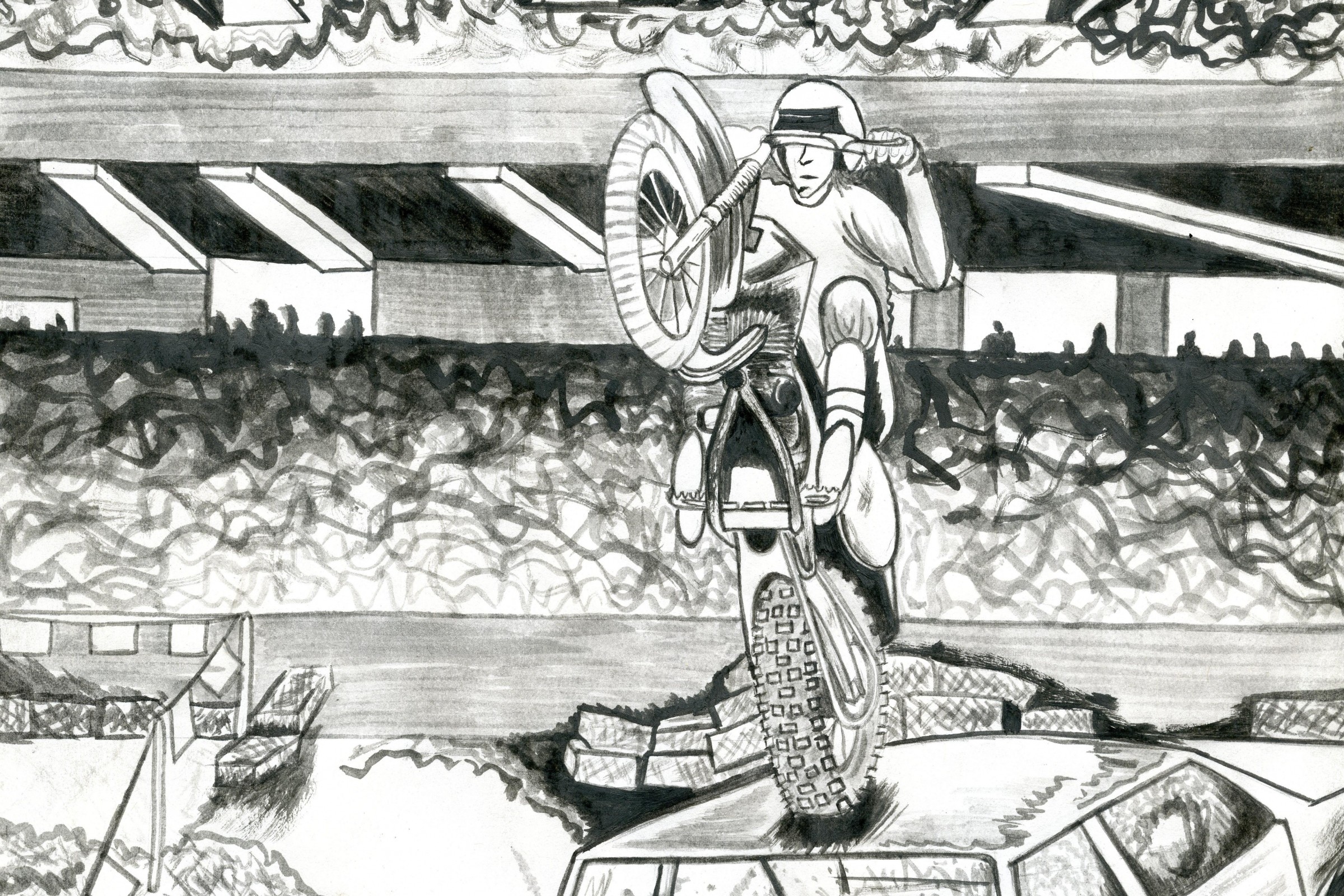 In association with MotoAmerica, Lanesplitter sent staff writer Alanis King to Circuit of The Americas in Austin, not to write a preview for the opening round, but to actually ride on the back of Chris Ulrich’s Suzuki GSX-R1000, which has a 1000cc motor with 205 horsepower and reaches speeds of 196 mph in a racing draft. With someone on the back, Ulrich can reach speeds of up to 170 mph. How fast did they go? “I’m not sure how fast we went, because I was too busy contemplating my life choices and trying to make peace with all of my unfinished earthly business—I didn’t want to come back and haunt you all—but I do know that my butt came off of the seat every single time we took a corner,” wrote King. I think (maybe), I’d be down for this. Check out the video below, and read more about it on Lanesplitter.

What to Expect out of MotoAmerica in 2017

Run in conjunction with the Red Bull Grand Prix of The Americas MotoGP round, MotoAmerica opens their 2017 season this weekend. The KRAVE Group, which took over American road racing from the Daytona Motorsports Group beginning with the 2015 season, still faces a tough mountain to climb in reviving interest in road racing here in the U.S. The 2017 season will see more rule tweaks, this time in hopes to align more with the WorldSBK model. There is also hope that after two years of domination by Yamaha, who won 28 of 36 Superbike races since 2015, 2017 will offer a more even playing field. Lance Oliver broke down what to look for in MotoAmerica in 2017 on Revzilla.

Certainly sooner than most would have predicted, MotoAmerica has made that move in just its third season, changing the rules to match WSBK. They’ve also tweaked the rules for the Superstock 1000 bikes, which carry on their own race on the track at the same time with the full-fledged Superbikes. By allowing a few more modifications to the Superstock bikes, the goal is to allow them to be faster for more laps. In many cases last year, Superstock bikes were able to harass the Superbikes in the early laps, but as the tires began to wear, the Superstock bikes lost touch.

Switching to World Superbike rules is a mixed blessing for the teams. It increases their work load, as they have to learn new electronics packages, but it also opens up new possibilities for gaining an advantage. Odds are good that we’ll see faster lap times this year.

In an announcement earlier this week, MX Sports Pro Racing (sister company to this site, as you probably already know by now) and FMF revealed plans to host a 125 Dream Race Invitational Triple Crown. (Side note: Vital may or may not have imploded within minutes of the announcement.) Here is how the format is expected to work:

The format for each of the three races in the Triple Crown will feature one practice and one moto, which will take place before the first 450 and 250 Class motos. The competitors that will make up each 125 Dream Race field will consist of past champions, former pros, factory-level amateur competitors, and potentially even industry icons and celebrities.

If you remember, the inaugural race (as part of Lucas Oil Pro Motocross) was run last year at Washougal with our own David Pingree taking a hard fought third. We expect Ping to lineup at some of the rounds this year as well, as long as his daughter doesn’t have a soccer game.

Also, check out this interview we did with Joey Lancaster, the man who made the race happen, last year.

As we noted a few weeks back, after just one season, the NFL is dumping Twitter as its live-streaming partner for its Thursday Night games, and switching over to Amazon, which won the rights with a deal worth $50 million for only 10 games. Bloomberg reported this week that the deal is expected to reach $80 million, as the deal “includes as much as $30 million worth of marketing and promotion of the football league, pushing the total value of the contract as high as $80 million.” The NFL is just printing money at this point. More from the report:

Amazon will promote the NFL across its platforms, said the person, who requested anonymity because the terms of the contract are private. The NFL and Amazon declined to comment on specifics of the contract, including how the company would promote the league.

While CBS, NBC and the NFL Network will continue to broadcast the games on television, short-term digital agreements are part of the league’s strategy leading up to 2021, when the traditional broadcast deals will begin to expire. At that point, the NFL will look to tech companies as possible bidders alongside networks like ESPN, CBS, NBC and Fox.

Sometimes That Craving for McDonald’s is Uncontrollable

Gronk Takes on the White House

The New England Patriots were at the White House this week after winning the Super Bowl, and of course Gronk is doing Gronk stuff. We all need a little Gronk in our lives.

Working out with a F1 Team

The common perception (or should I say misconception?) is that car drivers are lazy and out of shape. Mostly, that’s a very false narrative. Here is a bit of proof. Matt Gallagher of WTF1 went to train with the Renault Formula One team in Britain, and let’s just say, it was a struggle.

Google Earth Is New and Even Better

Google has released a new version of Google Earth and sweet baby Jesus it's pretty cool. One of the new features is called Voyager, and is a collection of interactive guided tours. It also features a new “I’m Feeling Lucky” button. Currently, there are over 20,000 lucky landing places with Knowledge Cards, collections of pictures and links to related places. Check out this teaser they released.

Driver Gets 15 Years For Swerving at Motorcyclist

In 2015, video showed a Texas driver swerving into the oncoming lane of traffic to hit a motorcyclist who was attempting to pass the car. Per CBS News at the time, the driver, William Crum, was arrested and charged with two counts of aggravated assault. Eric Sanders, the rider, suffered mild road rash and his passenger,Debra Simpson, suffered a broken arm and scrapes and bruises that landed her in the intensive care unit of Texas Health Harris Methodist Hospital Fort Worth, per the Miami Herald. Crum was seen in the video saying “I don’t care,” after the crash. This week, Crum was convicted on two counts of aggravated assault with a deadly weapon and sentenced to 15 years in prison. From the Miami Herald.

In a jailhouse interview the day after his arrest, Crum showed his leg where he claimed that a spider had bitten him, causing him to momentarily lose control of his vehicle before the wreck. And he said that if Sanders hadn’t been “breaking the law” by trying to pass in a no-pass zone the crash would never have happened.