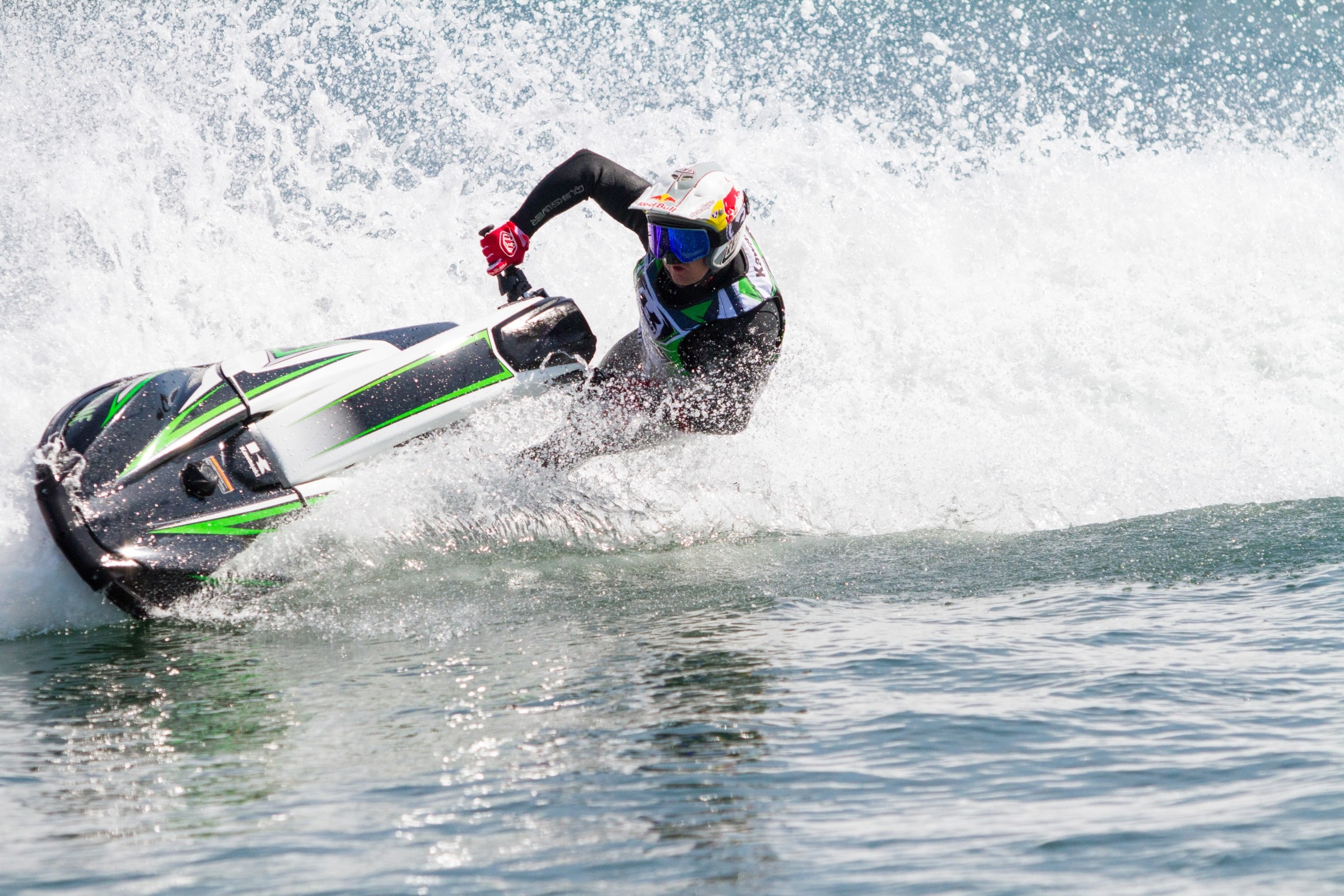 Hey, so you were the lucky one who got to go to the beach (for work purposes) and ride Kawasaki’s new stand up Jet Ski. Tell us about and it rub it in some more, please.

It’s a tough go with the assignments out here but I’ll forge ahead somehow. Actually, I’ve been a stand up Jet Ski fan for a long time. I was thinking as I was headed to this Long Beach intro that I bought my first used JS440 in 1990 with Suzuki Bucks as an amateur racer. I put hundreds of hours on that thing and then sold it to my cousin, who still rides it today! I updated to a new Kawasaki after I sold that one and it’s still going strong as well. I watched as the trend went from 440 to 550 to 650 to 700 to 800cc over the years, all in two-stroke form. California, in their infinite ecological wisdom, banned two-strokes from all navigable waterways in the Golden State and sales took a hit in the personal watercraft industry. Kawasaki actually stopped building stand up skis several years back and went to work, behind the scenes, developing the next generation of stand ups.

I wasn’t shocked to hear that Kawasaki was releasing a stand up Jet Ski with a four-stroke engine. I was shocked to hear it was a 1500cc, 160 horsepower engine in a completely redesigned hull. If the ski looks bigger than its predecessors, that’s because it is. In order to fit the monstrous power plant the hull needed to expand. And lifting the ski from your truck to the water is no longer a two person job, unless you WANT to get a hernia. This thing is heavy on the stand. But all that goes away once you get it in the water. The V-hull gives the new Kawasaki a very quick and reactive feel, even at low speeds. And there is never a shortage of power; from the instant you crack the throttle until you’re going so fast your eyes are watering. This thing hauls the mail. The power delivery, just like on a four-stroke motorcycle, comes on smooth and strong, thanks to torque numbers stronger than some compact cars. The only time the ski felt heavy was when I tried to get it to hop out of the water and turn or dive under the water for a little submarine move. I only mention it because that’s my go-to trick to impress the gals on the beach and now I’ll need to figure something else out.

The SX-R has a very sleek, fast look with classic Kawasaki graphics and colors. The only thing slowing you down is the $9,999.00 price tag hanging from it. Still, when you look at dollars per horsepower, this thing is a steal.

I have another head scratcher for ya. So during the live broadcast of the Seattle SX Jenny Taft so thoughtfully showed and explained to us simple-minded viewers the size of the rocks lying in the loose soil. She mentioned that some riders had opted to run hand guards. It just confused me why not every single rider lining up to race that night wouldn't feel inclined to protect their hands from baseball sized rocks waiting to get launched off of fresh Dunlop tires attached to factory tuned 60hp 450cc power plants. Do hand guards inhibit performance or freedom of movement in any way?  Are they uncool?  I see Dungey ran them while Tomac did not. I cannot think of a single good reason to NOT run hand guards as a precautionary measure, especially for someone like Tomac who you'd think would be doing everything right now to protect his championship run. I don't think anyone suffered any hand injuries from flying rocks so I may be over thinking this, but it seems to me like there aren't any real reasons to not opt for the extra protection.

P.S.- Is there a petition we can sign to have Jenny Taft just be Miss Supercross at this point? She's got the assets along with an ability to not awkwardly ramble into the camera, which is more than what can be said for someone else I'll leave unnamed.

The broadcast team is definitely spoon-feeding the viewers. Between being reminded that Kawasaki’s are green several times per race and repeatedly being told how important the start is, I just assume they think I’m watching from a rocking chair I whittled out of wood while playing the banjo and eating applesauce through a straw. I understand we need to be seeker-friendly for those checking out supercross for the first time, but other sports don’t pander to newbies this way. I’ve never heard Jon Madden explain that the players need to move the ball 10 yards in order to get another set of plays or “downs,” to keep moving toward their end zone. They just call the action and the sport provides the entertainment. Whatever.

As far as protection goes, the only valid explanation is that it isn’t cool in our sport. Handguards can be a little annoying from a rider’s perspective, but not nearly annoying as a broken knuckle. Chest protectors might not look as “sick” as a skin-tight jersey but let me know how that works out the next time you’re getting a chest tube placed after slamming your ribs into the bars. The organs that will literally kill you in a trauma sit right behind the areas a chest protector covers. Seems like a no-brainer, right?

Jenny as Miss Supercross? Yes, please. If you’re going to put Miss Supercross on-screen and have her be an interactive part of the show she can’t nervously stare at the camera like she’s never had one pointed at her before and giggle like a high school girl who just got selected for an MTV spring break contest. Somebody get Jenny a black, leather bustier for this weekend.

Kudos to you for having the unmitigated gall to both abbreviate and capitalize your signature. I ask you, kind sir, what is “The Industry” doing to address the future? While a die-hard two-stroke aficionado myself, I firmly believe quiet, clean, easier to ride and maintain electric bikes may be our saving grace. Less noise and emissions = less stuff for the greenies to complain about (unless you run over a Yellow-bellied sap sucker or a Carolina Heel Splitter). Easier to maintain and simpler to operate will pull in the mechanically wary. Make the bikes so you can monitor your racing progress on your phone, and the tech nerds will love them. Are the manufacturers and promoters thinking about, and actively working on including electric bikes as the future of the sport, or do they have their heads buried so deep in the Buckley Berm at Southwick that they can’t see our sport shriveling up like George Costanza’s private parts after a dip in a cold pool? Is there a brain trust that cares about the future of dirt biking I could join, to contribute my self-proclaimed brilliance? I’m here and I want to help, and don’t think the Alta RedShift will save us on its own.

P.S.  I have autographed posters of you and some red-headed kid who rode #70 from the 1995 Charlotte Supercross as teammates at Pro-Circuit.  I think one of them might be worth some $$$.

Ask PING!: Where every Friday you can get an unmitigated dose of gall! Thank you for providing my new tagline. Honestly, I wish I knew what the “Industry” was thinking when it comes to the future of the sport. My concern for a while has been the cost and complexity of getting started in motocross with four-stroke bikes now hitting the 10K mark. I’m optimistic that the message from the masses is getting through with the announcement of the 125cc FMF Dream Race Triple Crown this summer. Don’t be surprised to see this little halftime series keep growing. I’ve been a proponent of the 125 two-stroke because it could be the affordable, simple gateway bike that brings new riders into our sport.

As far as electric bikes, I do know the folks at the AMA have been talking through the issues of homologation and, more importantly, sizing for electric bikes. You don’t have cubic centimeters to classify these machines, so what do you use? It’s difficult and they don’t want to get this wrong like many believe they did with four-strokes. Time will tell. The Alta guys are saying they want to be racing by 2018 and I’m sure their progress isn’t lost on the other motorcycle manufacturers. KTM already has a play bike version and if you think the Japanese brands don’t know how to make an electric motor you’re crazy. Battery technology, weight, and price will dictate when this market takes off but rest assured, it will.

P.S.: Regarding the posters … mine isn’t the valuable one.