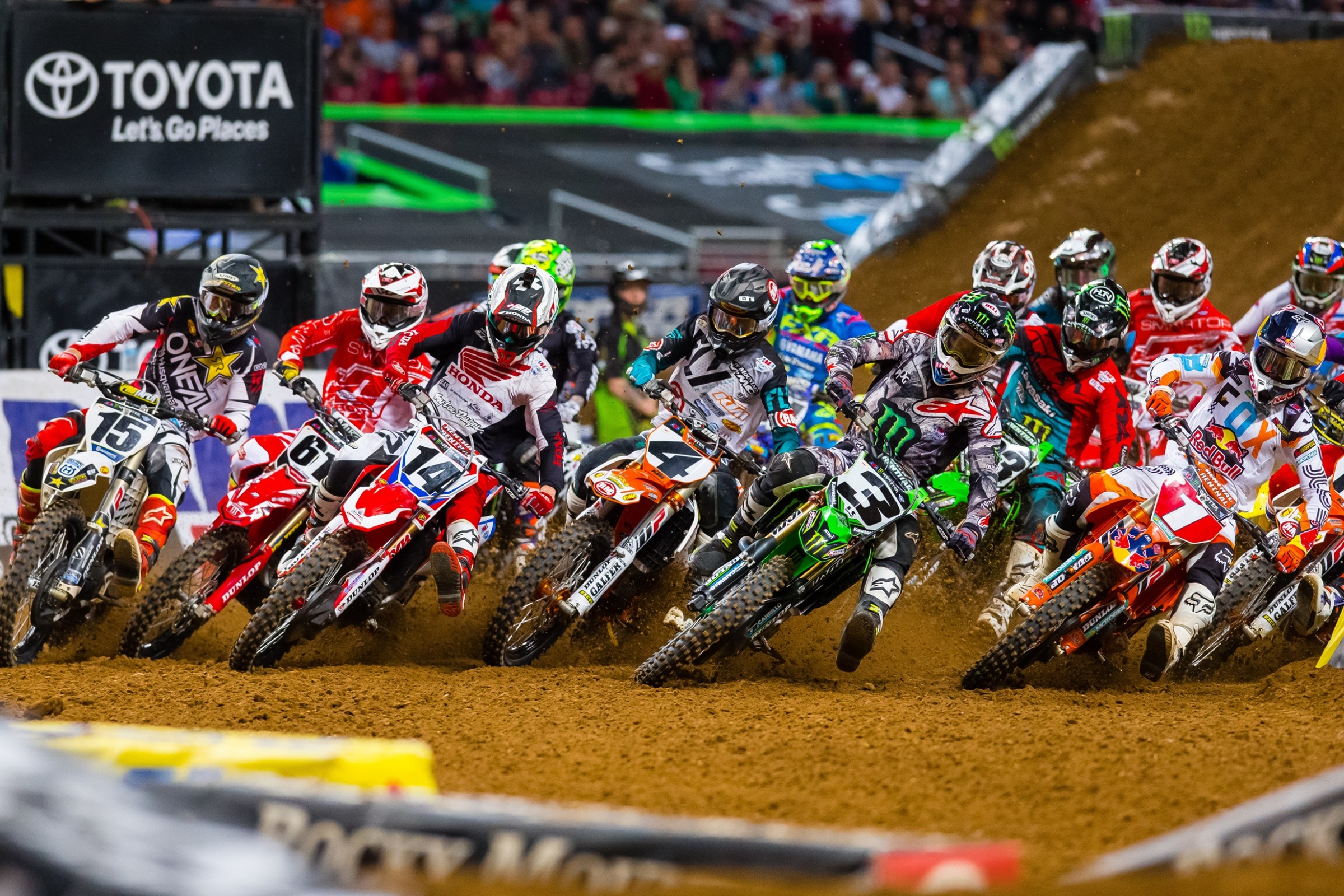 I’ve heard people say we’ll have a greater appreciation for Ryan Dungey when he’s gone. I disagree. There was great, great, great appreciation for him in 2015 and 2016 when he elevated himself to “the man” status and helped promote the sport in ways he didn’t during previous successes. Dads should have been naming babies Ryan. Or Dungey. Seriously, he’s the role model of all role models. I should have named my son Dungey Weigandt.

If there’s anyone we should gain a greater appreciation for now, it’s Ryan Villopoto. Dungey is showing how hard it is to win three-straight supercross titles, so to think that RV won his fourth straight by a considerable margin, while riding with a bad knee and pretty much being completely over it, well, that’s a tremendous accomplishment.

What’s eating Dungey? We’ve been wondering all year, but I think the chase for the real skeletons is over. He’s not crazy hurt or sick. Pretty sure this is just a combination of two things:  a next-generation guy (Eli Tomac) came into his own, and Dungey lost a slight edge. Ryan had his first scary injury last summer with a broken bone in his neck, and I think that’s taken a small percentage of his game away. We’re back to the very-good but very-safe Dungey of 2011-2014 as opposed to peak Dunge, with that extra edge seen in 2016.

But hey, Dungey has stayed in there, honored the last year of his contract, and still brought enough to the table to lead the points. Every rider on earth would trade his soul to be tied for the supercross points lead with three to go. Dungey reminds me of my beloved New York Yankees in 2001. After winning three-straight World Series, they were finally no longer the best team, but they were so used to winning, so programmed on how to win, so able to never beat themselves, that no one could eliminate them. They made it to the final inning of the World Series in the lead, ready to win it all again.

Dungey, by the way, can still win this, because it’s a three-race series, and anything can happen. One weirdo crash or bad start can impact things more than outright speed at this point.

Or maybe it can’t. Tomac proved in Seattle that even a bad start and a crash can barely hold him back.

It’s good to see Tomac finally find himself. We’ve always known he’d be good, but now we’re seeing the longest sustained drive of his career. Doesn’t every sport want to see its greatest talents flourish? Even people that aren’t Ken Roczen fans are still hoping Kenny gets healed and up front again. Tomac has had some ups and downs, including struggles to start this year, but now that he’s rolling, hot damn is it amazing to watch.

Tomac is that rare talent on a dirt bike that can just physically dominate the proceedings. He reminds me of Shaquille O’Neal in his 7-foot, 330-pound prime, or “The Freak” Randy Moss in the NFL. They were just too big, too strong, and too fast. When you see Eli jumping those tables on Saturday night or passing Marvin Musquin around the outside in the sand or going beast mode in Oakland, you see the future. Over the last few weeks, I’ve noticed the reaction from the fans. When Eli makes passes, they get loud. This is just a full appreciation of a bad dude on a dirt bike.

The hardest leap in this sport is reaching race-winning status in the 450SX Class. Many talents come through armed with 250 titles, great rides, potential, and more, but few of them make it all the way to “guys that could win on any given night” status. Marvin has done it. He’s a contender every time they #dropthegate, and it’s cool because the sport can always use more contenders. What if Dungey retires and Roczen can’t make it back?

As a bonus, Marvin shows it can be done in an unorthodox way. He rides, thinks, and attacks differently. I thought he was too gentle to manhandle a 450 at this pace, and did anyone think jumping the whoops would become an asset instead of a liability? Plus, while Tomac wins over fans with brutal effectiveness, Marvin does the same with his creativity and his nice-guy persona. People like Marvin, and that’s good because he looks set to be a star for a while.

Here is proof that consistency doesn’t impress like it should. In 13 starts, Cole has nine finishes of fifth or sixth. He is so consistent that when Musquin had a few bad races, Seely momentarily took over third in the standings. Unfortunately, if you’re not on the podium a lot or winning the occasional race, people don’t get excited about it in this sport. Cole is just missing that extra inch that Musquin found.

Is it possible that the loss of Roczen took some wind out of all the Honda sails? I know the team has worked very hard to make sure Cole gets the attention and focus he deserves, but think back to Anaheim 2, when Seely was in the mix between Dungey and Roczen. He was right there. He hasn’t quite been the same since. Maybe the Kenny accident was so huge that it impacted everyone, even Cole himself?

Anderson’s year has been like Seely’s. Not bad, but he didn’t take the leap like Marvin. You see how hard it is to win these races when a talent like Anderson, on a great bike and team, with a great program and a go-for-it attitude, still ends up empty. It’s possible that just as Seely was rocked by the loss of Roczen, Anderson was jacked by his DQ in Anaheim. He was in a slump after that for a while.

The last few weeks, Anderson has actually gotten good starts. If Tomac/Dungey end up locked in a chaotic battle worried about points and each other, maybe the door will open for a late Anderson win.

Want more proof of how hard 450SX is? Baggett has been great this year, massively improved and very fast. For that, he might only have one podium to show for it when it’s over.

Baggett is even surprising himself with his own speed, and he’s crashing a lot because of it. Seattle’s gnarly track and crazy race represented another podium opportunity, but he crashed. The hope is that he can keep this going and eventually all the pieces will fall into place.

Millsaps is a really good dirt bike rider. He’s gone through the ringer in his career, but he knows what he’s doing. He has 11 top 10 finishes this year which is really good. Of course, he’d love some podiums, but maybe all this 450 depth means we just need to adjust our standards. Fifth is good! Top 10 is good!

When a rider reaches the heights of Dungey, every move goes under the microscope, and the specter of “will he retire?” enters the room. It starts making us ask what’s wrong with the sport. Too many races? Too much training? Too much risk? Remember that Dungey and Villopoto are special cases, though, with programs, pressure, and performance that’s different than most. We have veterans like Millsaps, Josh Grant and Justin Brayton out there showing they can still get it done and still want to earn a paycheck. It ain’t all bad, people.

Tickle started the year slow but is back to his usual quiet effectiveness. He will get you sevenths and eighths all day long even if the field is loaded to the max. Look at all the dudes above him in points—they’ve all had moments where they were in the hunt or drawing attention or “man he was riding fast!” and then comes Tickle, who will always be the least talked about or noticed dude in the top 10. He’s kinda like Seely-light in his quiet but effective results. In fact, both Seely and Tickle would be the perfect tail-gunner for a team that also had a mega-talent on board, like, say, if RCH Suzuki or Honda HRC had Ken Roczen racing….

Dean’s goal for 2017 is this simple: get through the damned season without getting hurt. That’s it. And he’s doing that, with zero injury scares after two-straight washout seasons, plus he’s back on the factory ship after a brief run on privateer island. His dad Andy aged 15 years in those five weeks as his wrench, so he’s the real winner here.

Like so many others on here, though, consistency only gets you so far. Somewhere deep down, while Dean is happy to be sticking to his goal of not getting hurt, he also has to be hurting knowing he could do more. You know Wilson has the talent to be where Seely/Anderson/Baggett/Millsaps are, and he knows it, too. Good on him for just doing his thing right now and not getting frustrated.

We spent enough ink on Chad Reed last week, so best to keep it brief here: Bottom line is Chad isn’t getting the results he wants, and even he will admit that. Now, as soon as this happens, every time it happens, you start hearing people either asking “Will he retire?” or saying “He should retire.”

Here’s the difference between Chad and so many others that have reached the championship-winning level. When you end up accomplishing a lot in the sport and have made a lot of money, you enter what appears to be nothing-to-gain status, and retiring seems like the best option. But Reed lives for competition, and he knows no matter if he had 1 million or 100 million dollars in the bank, retirement would not include the thrill of throwing down, the fun of being in the game. At this level, that’s the one thing racing has to offer. You can be safer, or happier when you stop racing, but you’ll never get the thrill of competition anywhere else. For as long as guys still want that feeling, racers are gonna race.