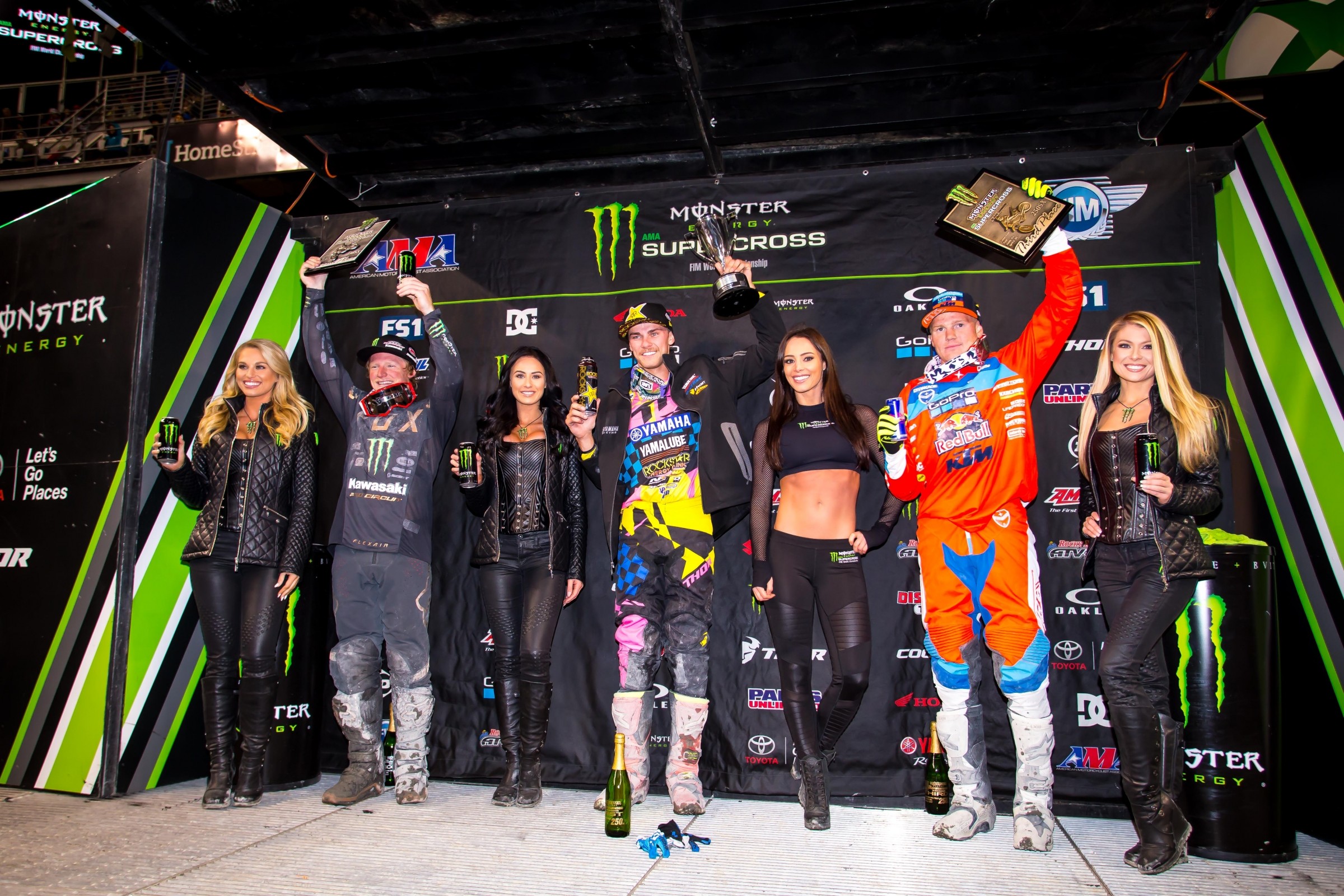 The 250SX West Region picked back up in Seattle and Monster Energy/Pro Circuit Kawasaki's Justin Hill held a 21-point lead over Yamalube/Star Racing Yamaha's Aaron Plessinger in the championship points going into the weekend.

As many expected, Plessinger was solid in the soft and rutty conditions. After getting an okay start, he worked his way up from fifth to first in just four laps and rode the rest of the race without a challenge from any other rider.

Hill found himself in second place after the second lap and stayed there for the rest of the main event. On the podium after the race, Hill said he felt a little rusty after the long break and was happy to come away with a podium finish and solid points lead.

Troy Lee Designs/Red Bull KTM's Mitchell Oldenburg rode well to get his first 250SX podium of his career. After finishing the first lap in seventh, Oldenburg steadily worked his way around riders to eventually find himself in third place as the checkers flew.

Racer X: Mitchell, congratulations. How hard was it this season having to watch all the racing? Did that give you some extra motivation to come back here in Seattle and get yourself on the podium?
Mitchell Oldenburg: Yeah, for sure. It was real unfortunate to go down in San Diego in practice and to be sitting here watching everybody. I’ve put in a lot of work and I feel like I had my best off-season of the year. I was feeling good. I was feeling ready. In Anaheim 1 I feel like I kind of played it a little safe just to get the first one out of the way. From 10 minutes after the crash in San Diego until now I’ve been mad, honestly. I’ve been ready to go. I’ve been watching everyone racing and getting these podiums, and my teammates and everyone. I’ve just been ready to go. So Monday morning waking up and knowing it’s race week I was just excited all week and just pumped to be back here.

Justin, you were pretty aggressive early on in the main event. Do you feel that with the situation a little bit different you could have challenged for the win tonight with Aaron, or were you just playing it a little bit conservative?
Justin Hill: Yeah, I was probably playing it more conservative than I needed to. There’s definitely things I think I could have done to go for him, but he, Aaron, was on rails. It was one of those deals where it was risk versus reward. I really was in awe of how gnarly the track was. There was stuff he was doing and he was making it look easy, and it was not easy. But I can’t really complain. I’ve been off the podium one time and with four wins, so I’m really excited just about this season. I didn’t think when I came in busted shoulder and not thinking I was going to be where I’m at. I’m pumped with it.

Aaron, you got yourself into the lead before the red flag and then unfortunately the race had to stop. How hard was it to keep your composure on the line and how were you able to do that and get back on the gate and come out swinging after the restart?
Aaron Plessinger: I was not too happy for the red flag, but I just kept my head on straight and kept focused. I came out not too bad on the second start and made a few passes and just focused forward. It was a great race. Everybody rode great. It was just my kind of track. I like the ruts and I like sketchy situations, so it was a really fun race.

Mitchell, I think you were the first one that did the triple, triple, triple in practice however you didn’t do it in the main, as far as I saw. In that section, what was going through your mind? How did you decide to hit that section every lap?
Oldenburg: I don’t know. In practice it was one of those things on my off lap I just sized it up. It was my very last lap of practice. It was a little bit hairier than I wanted it to be. The main, I knew it was going to be a long main. I knew the ruts were going to get deeper, the track was going to get gnarlier. So for me it was just something that was going to be consistent every lap. I got into a good rhythm and I was going double, triple, double, double, and that just seemed to work better for me. I didn’t want to take that risk. I felt like I was in a good position, and just the risk/reward wasn’t there for me.

Justin, this is like your home race. How much pushing and pulling did you have? People wanting to say hi, and media work you did the last two days. Just talk about the atmosphere here.
Hill: I pretty much wasted half of the week doing some stuff, which is fine and I love doing it. I actually had a great time, but you kind of can get a little rusty not riding since I rode Tuesday. I came out here and then had a little bit of that [press and fan obligations]. The day was nuts. Just family, friends, getting everybody in and just kind of saying hi to the people that you miss and haven’t seen. It was definitely a lot of… I couldn’t sit down. This is the first time I sat down all day, really! It definitely played a part I think. Next time I would have definitely just kind of said, hey, I got a job to do. But it’s hard.

Justin, you’ve raced here before. I think the only one up there that has. How does this track compare to other Seattle supercrosses you’ve raced?
Hill: It was not this gnarly in ‘14. Not even close. I was just impressed it wasn’t a mud hole. Once again we were sitting here looking at it and just watching it rain and saying, “Dude, this is going to suck.” They fixed it. They made it not completely a mud hole. So I was excited about that. Like Aaron was saying, it was seriously just like everything was sketchy, and it was gnarly. I just did what I could. I played it really conservative but he was killing some of those sections and making them look easier than they were, really. It was just gnarly out there, but it was not as gnarly in ’14. Not even close.

First race back after a really lengthy layoff. You had to wait all day. Did the one practice affect anything because you didn’t know how the track was going to break down or shape up, or just get destroyed totally? How did you guys handle only having this one, ten-minute session and then we have to go straight into racing?
Hill: I kind of liked it, but maybe I didn’t. I don’t know. I felt like, oh yeah, it’s cool. I can get the track dialed. I normally get comfortable quick, but there’s a lot I kind of missed, honestly. I didn’t do the three-three that he was doing until the main.

Plessinger: It was quick for sure, but I kind of found my rhythm. It was getting pretty rutty in practice, so I liked it and just found my rhythm pretty quick. It was kind of weird, one practice, but it was pretty fun.

Oldenburg: It’s the same for everybody, really, so you can’t really look at it as a plus or a minus. Just with how rutted and gnarly the track was there’s not many triples and big rhythms to go out there and do, so it was really easy just to go out there and double everything first lap and then just kind of see what you can do after that. It’s one of those things. It’s the risk/reward. Are you willing to risk doing the triple to possibly ruin your season? I don’t think it was that big of a deal. Like I said, it’s the same for everybody.

Mitchell I think you had to get your teammate Shane McElrath and then you had a good battle with Jimmy [Decotis] to get third. Can you just talk about those battles and getting up to that spot?
Oldenburg: Yeah. I had a really good start before the red flag. I was second, and then went back to third the section before. Honestly think the restart was good for me because I was riding pretty tight, so it just kind worked the bugs out a little bit. Then the restart I obviously didn’t get that great of a start, so I had some work to do. I knew the track was going to break down so I just kind of focused on myself and did my own thing. Honestly I never even looked at my pit board the whole moto. I was just trying to hit my marks and if the opportunity to make a pass was there, then it was there. If not, then we’ll just keep plugging away and worrying about ourselves.

Aaron, you hadn’t gotten a win yet this year. You have won in the past. How important was this win to you, championship aside? Just the confidence that comes with the win?
Plessinger: It was definitely important, just being the last three races and being kind of far behind in the points. I knew this track was going to be really rutted and nasty. I thought it was going to be a little bit more muddy than it was, but Dirt Wurx, they did wonders again. It was just a fun race. I found my groove really early in the main and I just focused on myself. I knew I could do it and pulled it off.

Aaron, before the race, early, like 11:00 in the morning you were talking with your team owner, Bobby Regan. Bobby put up a number one and he said, “This is going to be your night.” Did that put a little pressure on you?
Plessinger: Not really. Kind of, in a sense, but I really just kind of focused today. I just had one goal and that was to win the race. When he said that I kind of just knew it was going to be my night.