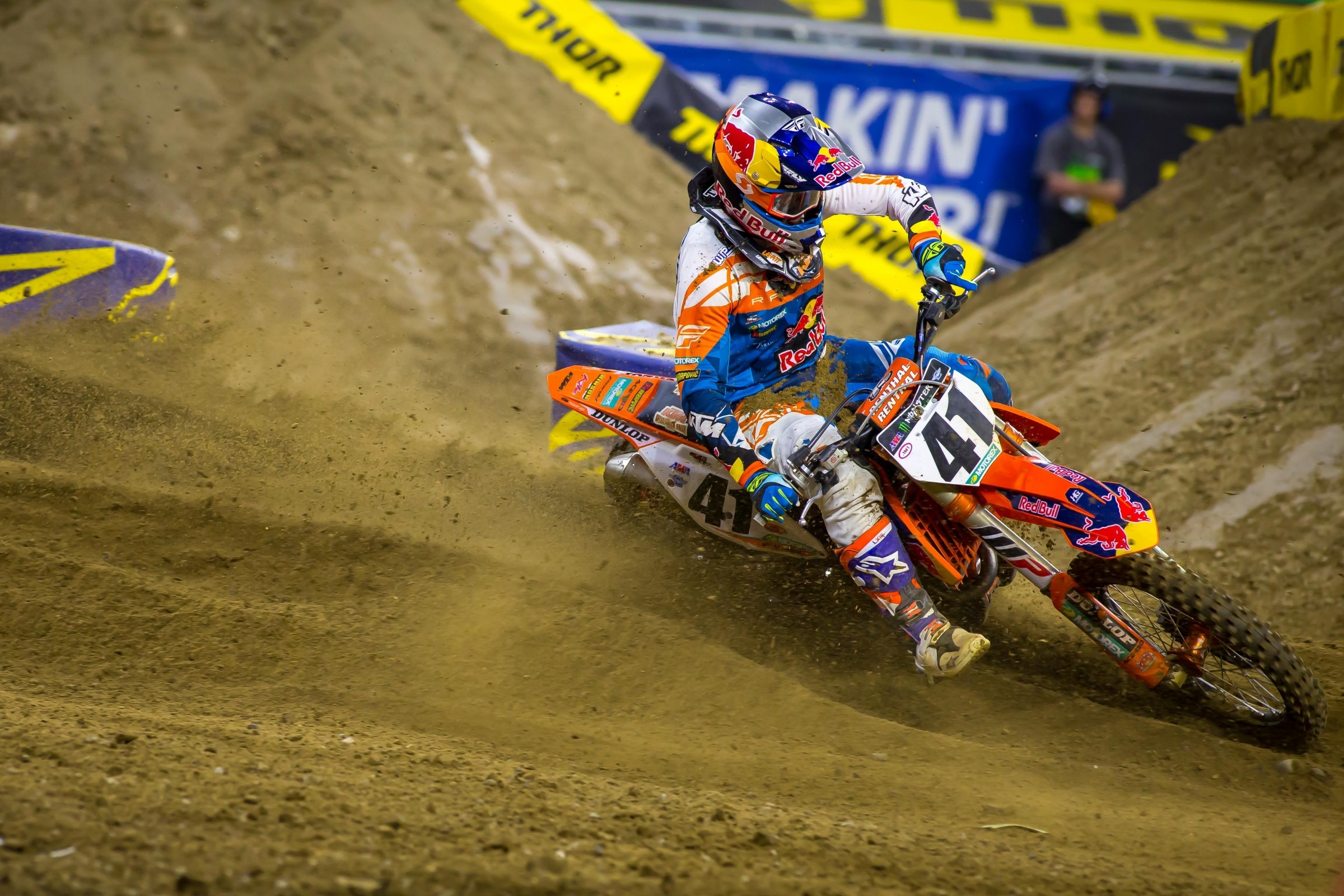 Comment: Aeck suffered two fractured vertebrae, some broken ribs, and a hurt shoulder when he was landed on in Arlington. To help with Aeck’s medical costs, go here.

Comment: Albertson recently told Racer X that he may have to have five vertebrae fused and have rods placed in his back to stabilize his spine after incurring a long list of injuries in Daytona, including: fracture of the manubrium and body of the sternum (posteriorly displaced by 1cm), fractured T5 through T7 vertebrae, compression of the T4 through T6, epidural hematoma at T5 (epidural space is the outermost part of the spinal canal), bilateral patchy lung contusions, and a left metacarpal fracture. If you wish to make a donation to Albertson via Road 2 Recovery, go here.

Comment: Alessi crashed on press day in St. Louis and broke his collarbone. As far as breaks go it wasn’t terrible, but it’ll be enough to keep him off the gate for the rest of the supercross season.

Comment: A virus will keep Canard out of action for the remainder of Monster Energy Supercross. He’ll be back for Lucas Oil Pro Motocross.

Comment: Clason was landed on in his heat race in St. Louis and couldn’t finish the night. In an Instagram post he said nothing was broken and that he’d be back racing in Seattle.

Got landed on first lap of my heat race, got some X-rays and some stitches in my arm and nothing is broken so I tried to ride my semi but just couldn't hang on. So we had to call it a night. I'll be back next week, don't worry.

Comment: Gilmore went down on the start of the 450SX LCQ in St. Louis and suffered a concussion and fractured his C3, C7, and T1 vertebrae. He’s out for the season.

Comment: Peick hopes to be ready for the beginning of Lucas Oil Pro Motocross.

Comment: Pipes broke his collarbone in Detroit, but hopes to be ready for the start of Lucas Oil Pro Motocross. For better or worse, he’ll have this kind of team environment to look forward to when he returns.

Comment: Roczen is out indefinitely after a big crash at Anaheim 2 left him with injuries to his wrist, elbow, and radius (forearm). Christian Craig will fill-in for him, starting at Hangtown.

Comment: Bloss took himself out of the season when he crashed in Minneapolis, dislocating his shoulder and fracturing his humerus bone. He should be back for Lucas Oil Pro Motocross.

Comment: Bowers had hoped to be ready for Seattle after fracturing his femur Glendale, but it didn’t work out. The team says he should be ready to go in Salt Lake City.

Comment: Commans injured his arm and wrist when he came up short on a triple in Glendale. He’s back for this weekend.

Comment: Fornker crashed earlier this week during practice and, due to soreness in his right hip, will miss Seattle. His return to racing will be evaluated on a race-to-race basis.

Comment: Gaines will return for the last two rounds of the 250SX East Region after breaking his collarbone in Minneapolis.

Comment: Hampshire is expecting to overcome a fractured tib/fib, suffered in Toronto, to be ready for Lucas Oil Pro Motocross.

Comment: Karnow crashed during qualifying in Detroit and fractured his T1-T3. He had surgery and is out indefinitely.

Comment: Lionnet fractured his jaw in Arlington but will return this Saturday.

Comment: Martin had a bad crash when Christian Craig hit him during practice in Detroit. He hasn’t raced since and when we spoke to him earlier in the week he said he’s still a few weeks out from getting back on the bike.

Comment: Martin announced today he will be sitting out the Seattle Supercross after suffering a crash while testing for the 2017 Lucas Oil Pro Motocross Championship. According to Martin, he "had to jump through the bars" and is really sore. The two-time 250MX champion is looking to be back in Salt Lake City.

Unfortunately due to a really bad get off last week on the outdoor track I won't be lining up at Seattle sx this weekend. I have my eyes set on Salt Lake City sx. I had to jump through the bars and I'm really sore. This is a big bummer for myself and the whole @fchonda @honda_powersports_us crew.

Comment: McAdoo cut his hand prior to Daytona and will return to racing in East Rutherford.

Comment: Nichols will miss the rest of Monster Energy Supercross after tearing the MCL off his tibia and suffering a small fracture to the tibia while practicing.

Comment: Nicoletti may be able to race the final few rounds of Lucas Oil Pro Motocross after dislocating his ankle, shattering his heel, and fracturing his lower fibula on press day in Arlington.

Comment: Taft hopes to be back for Lucas Oil Pro Motocross after suffering a concussion before A2.