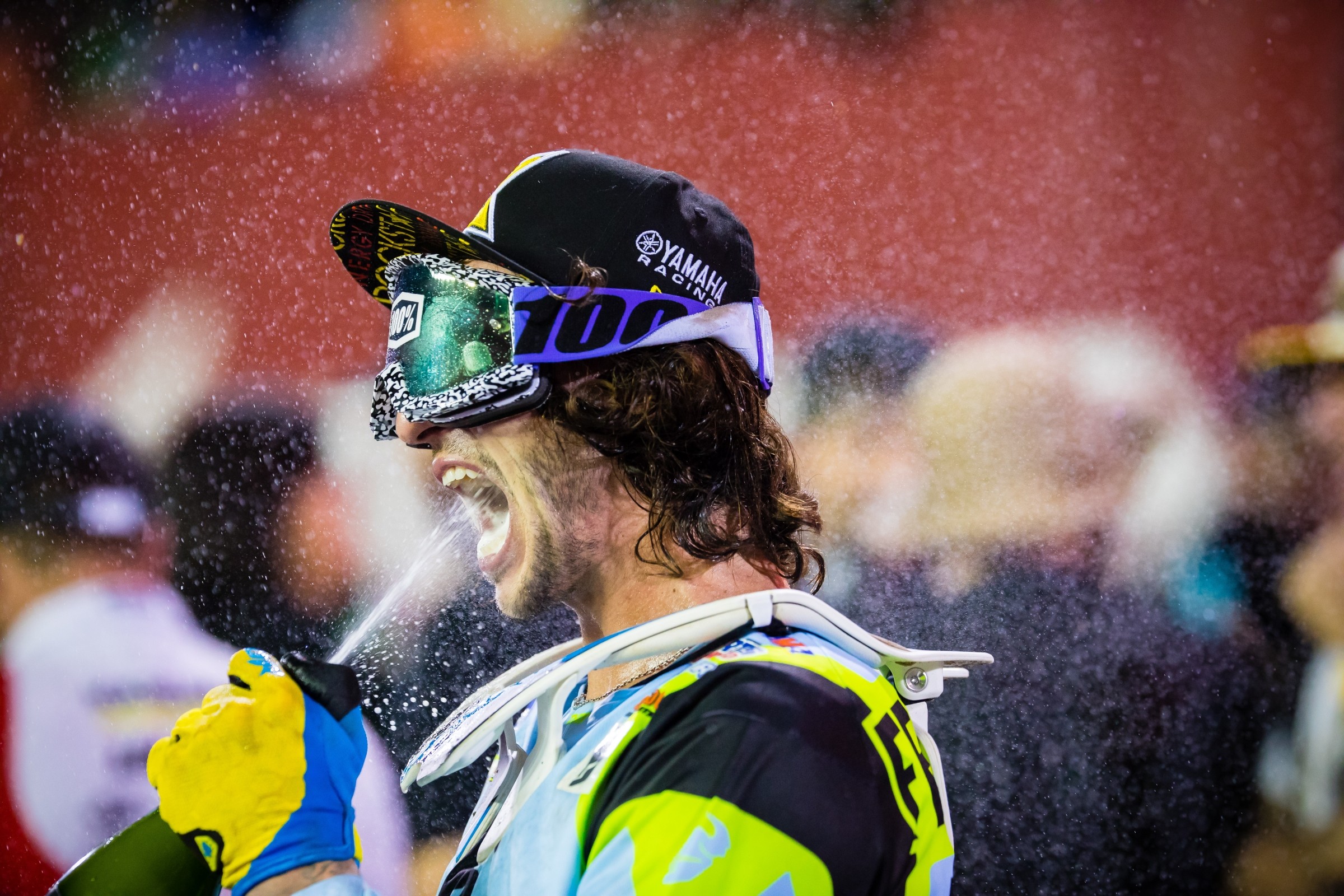 Earmuffs. NASCAR talk forthcoming. Despite the lack of interest in anything NASCAR related from fans of this sport, this article from ESPN is interesting. If there is one thing the sports do share, it’s that both are heavily reliant on outside sponsorship to be able to thrive. From series sponsors, to team sponsors, to individual sponsors for the riders, the ability to attract outside corporate sponsors is huge, and can determine the fate of a team—just ask RCH. While there have been plenty of success stories this year, some NASCAR drivers/teams are struggling to get sponsorship for the entire year. Also of note, the amount of money sponsors spend on NASCAR is well above what teams are getting in supercross/motocross.

The Nature's Bakery deal showed that star athletes with crossover appeal can command millions. SHR was getting $15 million for 28 races ($535,714 a race) from the fig bar company.

With all the teams set up as independent contractors, there is no set amount for sponsorships. At the rate-per-race that Nature's Bakery was paying SHR, that works to $20.4 million over the season.

Some struggling teams sell the hood of their car for reportedly low five-figures a race if they get desperate, creating a decision for many organizations on whether to take less money than they think it really is worth just to have something. Rick Hendrick has said in the past he would rather promote something from one of his dealerships or try to add value to a current partner than devalue the price of a race sponsorship to get a new company on the hood.

Kailub Russell is a Beast

Over the weekend, GNCC held their second round of the 2017 season in Palatka, Florida. The sandy, three-hour affair is known as being one of the most physically demanding circuits of the series, which makes the stats below even more impressive. Kailub Russell, he of the latest Racer X Illustrated cover and four-time GNCC champion, won the event for his first win of the season. Very impressive. But, my god, look at his heart rate over the course of three hours!

Since a lot of people have seen the pic of my watch and I'm frequently asked if I think off-road is as intense as moto, figured I might as well share my graph. Dirt bike racing is by far one of the hardest sport's on earth in every aspect, physical and mentally. Most people give up on themselves in this zone, and for good reasoning, it hurts. I'm sure a lot of people out there think this is way to high but for the the sandy track conditions this matches up to what my on the bike training has been like the last few months in the sand. #pushinglimits

I would die! Jason Weigandt has a really good story in the latest issue of the magazine, which you can subscribe to here, about Russell’s training with Aldon Baker, and much more.

Social media giant Facebook continues to gobble up rights to sporting events to stream on their Facebook Live platform. Facebook, which already has deals with the World Surf League, Liga MX, and the NBA D-League, will stream 22 games of MLS (Major League Soccer) this year. The first game will be streamed on March 18. Per MLS, “at least 22 matches during the 2017 MLS regular season that are being broadcast on Univision networks in Spanish will now be available in the U.S. for live streaming in English via the Univision Deportes Facebook page.” Apparently the matches will only be available in the U.S. and will feature Facebook-specific commentators. More from the announcement:

Additionally, MLS will produce 40 exclusive “Matchday Live” shows on Facebook on MLS game days, which will feature highlights and analysis from around the League and a preview of the day’s upcoming matches. These shows will be produced specifically for Facebook and available on the MLS Facebook page. The pilot episode of “Matchday Live” ran on MLS Opening Weekend, and the next episode will happen this weekend, starting at 4 pm ET.

Dorna CEO Carmelo Ezpeleta told Spanish publication AS that plans are in place for an electric motorcycle racing series to be held in conjunction with MotoGP beginning in 2019. Dorna would run the proposed five-round format, where the hope is that 14 MotoGP riders and teams would fill the grid, alongside the four fastest Moto2 riders. Asphalt and Rubber has more:

The electric race bikes would be a single-make (supposedly two brands have already expressed interest in providing the race bikes), and Dorna Sports would look to existing teams and riders in the GP paddock to fill the entries.

It is not clear who would be providing the race bikes, though we would expect the expressed interest expressed comes from established OEMs already in the GP paddock, so don’t expect to see bikes like the MotoCzysz E1pc above filling the grid.

Ezpeleta also made it clear that the series would be absolutely carbon neutral, with the host venues being required to install green energy power stations, fueled by wind turbines or solar panels.

According to Red Bull (of course Red Bull is behind this) it involved 96,000 revolutions per minute, 40kg of thrust, temperatures of up to 850°C, exhaust capable of speeds up to 120kph, and propelled him to speeds of up to 75 mph on skis.

Who’s Up for Some Motocross Football?

These Pool Trick Shots are Amazing

Bloomberg doesn’t typically report on MotoGP, which is why I found this latest article so interesting. According to a recent report, MotoGP is considering paying a dividend worth a ton of money. More from the report:

As part of the plan, Dorna would refinance its existing debt and take out a loan to pay its shareholders a dividend of more than 200 million euros ($211 million), the people said, asking not to be identified because the deliberations are private. Majority owner Bridgepoint Advisers is holding preliminary talks with lenders about the potential deal and no final decision has been made, the people said.

A spokesman for Bridgepoint declined to comment. Dorna and minority investor Canada Pension Plan Investment Board didn’t immediately respond to requests for comment.