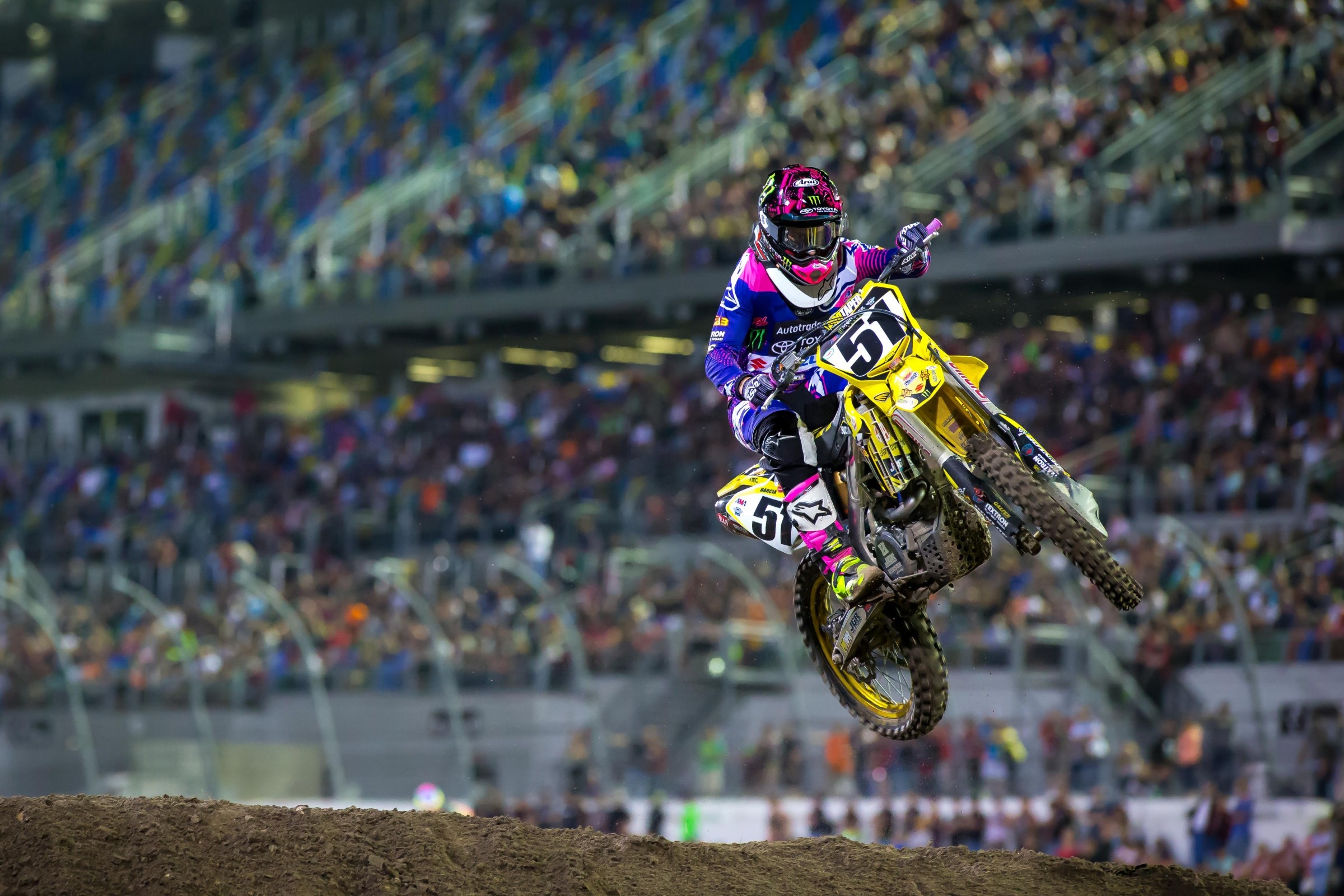 In Justin Barcia’s fourth race back since returning to Monster Energy Supercross after hurting his wrist before the season started, he has shown incremental improvements. An 11th place finish may not have been what he wanted going into the season, but grabbing a heat race win and working his way through the pack after starting in 16th place is a solid weekend. We caught up with the JGR Suzuki rider in the pits to talk about his heat race, aggressive riding and more.

Racer X: The heat race, were you a little emotional?
Justin Barcia: I didn’t cry like Mike Alessi. Everyone knows he cried, so I’ll say his name. It’s fine. I was definitely pumped on it. Not even pumped or anything, but just felt good. It’s been a tough road.

When you were out front, it’s not just you got the start but you pulled away even. So you were feeling good?
I’ve been feeling better. I came back after I hurt my wrist riding. I rode like two weeks and I really did two deep weeks of riding and I think I kind of did just a little too much. I was feeling kind of crappy these past couple weeks with arm pump really bad. I went and got some blood work done this week and saw a few things that didn’t look how they should look, so I kind of fixed that a little and I felt better today. I wouldn’t say I was anywhere near 100 percent, but I definitely rode way, way better. There’s good things to take away from this weekend for sure. The main event just kind of was … I don’t like to say luck or bad luck or anything, but it wasn’t very good luck. I crashed in the first corner.

What even happened there? Do you even know?
I don’t even really know, honestly. Then I was riding pretty good and staying pretty close to Ryan [Dungey]. Then I got tight and rode a little better at the end and caught up to those six, seven, eight, nine guys in front of me and then it was over. It’s a little frustrating.

Was the arm pump better though this week?
I felt much better. I’ve been working on some stuff and starting to get better. Just keep on trying.

Eleventh place, I know it’s not exactly what you want but it’s another improvement weekend. Are you happy with it for the most part?
The heat race was great. That was the highlight so far. I’m not getting bummed or anything because I don’t have really any expectations right now. I’m just doing the best I can and trying to get better every weekend. So I did get better this weekend. My results didn’t show in the main event, but all day I did get better. Move on to next week and keep working on things I need to work on. Better myself and hopefully by the end of the supercross season I’ll be doing some good races and going into outdoors I’ll be healthy and fit and it will be good.

You’re starting to get some confidence back obviously with that heat race. The people, do they need to be looking out for Bam-bam again here soon?
No, I had the fight with [John] Gallagher this morning in the semi. Last weekend I got into it with a couple guys, but no one crashed. It wasn’t like it got crazy, but everyone was pissed off. Then Gallagher gave me a warning today and I just wasn’t really having it. I was just like, no, you’re wrong.

What is it this year with those warnings and stuff?
I don’t really know. I came back and I’m doing the best I can and I’m just trying to do my own thing and really not get in anyone’s way or fight with anyone. I’m just trying to better myself every weekend and then people get frustrated. Feld loves using the highlights of aggressive riding and stuff, but then AMA slaps you on the hand as much as they can. So it’s a very awkward position to be in as a rider. Like, “Don’t ride aggressive.” “We love it.” Like when Weston [Peick] got into it, they used that highlight reel but he got fined. Let’s figure this out. There’s a difference between super dirty, stupid riding, and hitting people versus going at it. I think hitting people’s not right, like punching people.

Sometimes it comes down to that, right?
I guess. I don’t know. No one got disqualified.