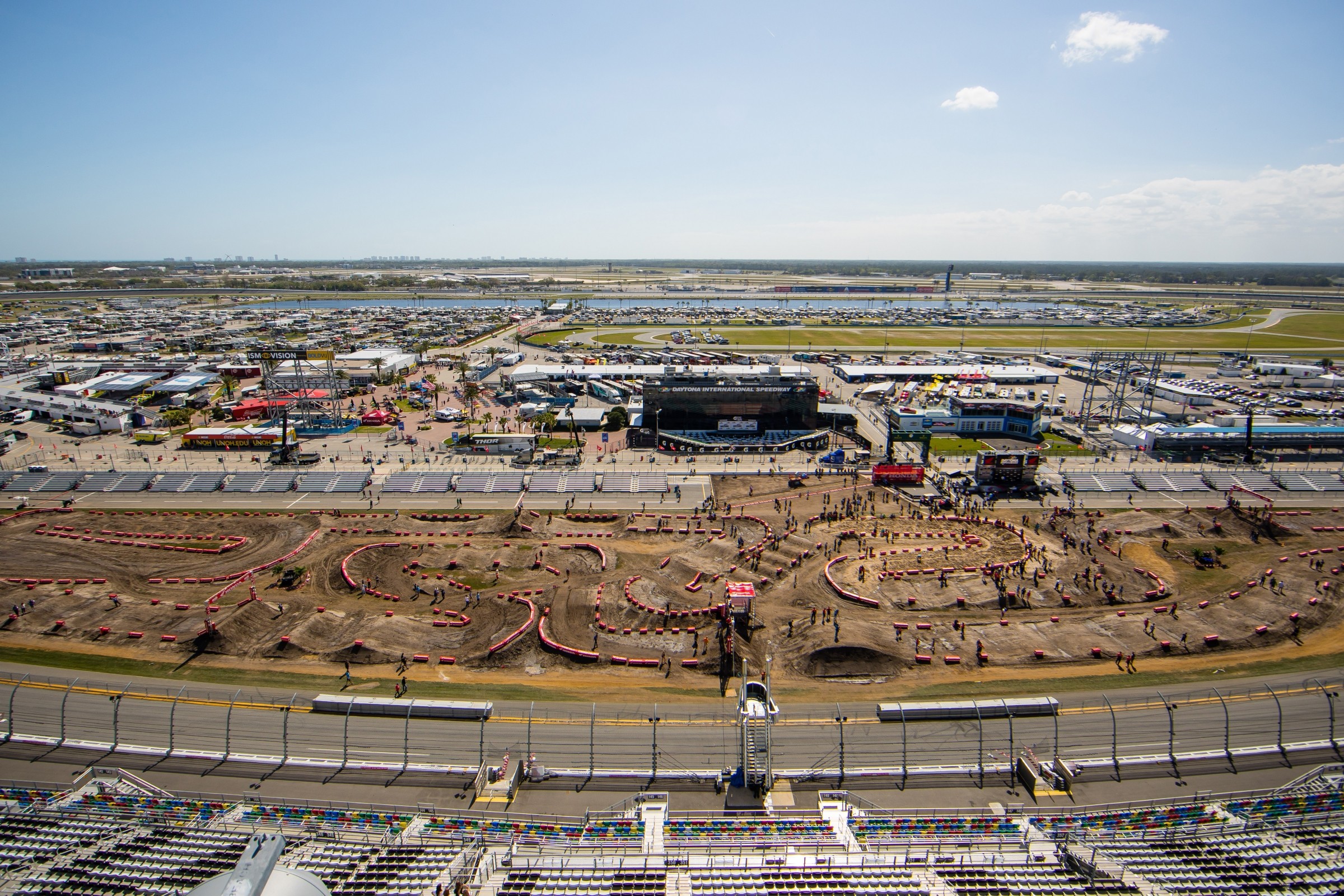 Well, that’s a wrap on Daytona. Most of the talk surrounding the track wasn’t on the positive side. Too many corners and too little opportunity to pass seemed to be the common theme. I was a bit puzzled by the lack of Daytona-style sand whoops as well. The deep Daytona black-sand whoops are typically a mainstay and add a brutality to the race that other venues just don’t share. Not having that aspect took away a great chance for riders to pass and also just seemed to pull Daytona towards the middle when Daytona is at its best when it’s a total outlier. For several reasons, this year’s Daytona just lacked racing.

Going through the results sheets, the evidence is pretty clear. If you got a good start, you were going to do well. In fact, if you got the holeshot, you were almost guaranteed to win. In 250 Heat 1, 250 Heat 2, 250 LCQ, 250 Main Event, 450 Heat 1, 450 Heat 2, 450 Semi 1, and the 450 LCQ, the rider who got out first also won. Cole Seely passed Justin Bogle in 450 Semi 2 and Eli Tomac passed Jeremy Martin in the 450 Main Event, but other than that, no dice on passing the leader. That’s pretty astonishing and makes for uneventful racing.

One big reason was the number of corners. There was something like 17 corners on the Daytona course. Having that many corners takes away from the length of straightaways and gives less opportunity to pull alongside another rider. Passing at Daytona is typically done on the straights because of the way the turns shape up. The inside rut that cuts into the sand is usually the best route simply because it is the shortest distance.

At a standard supercross, the insides are typically too slippery to use so the berms become ideal, but Daytona is anything but standard. The berms are used less often which also takes away the block pass option in many cases. So, what happens in all of these corners is that the lead rider just goes from inside to inside and without a long run for the following rider to make up time, he doesn’t have much in the way of opportunity. It was easy to see as the rider behind was simply unable to find any room and by the time he was able to get close, there was another corner. The lead rider would hop to the inside rut and voila, he had maintained his lead.

The only real passing seemed to be either from a mistake, hyper-aggressive riding, or the lead rider finally getting worn down. In the 450 main event, Eli pushed Jeremy Martin past his fitness comfort zone and J-Mart had to submit. The 1:11 lap times they were posting had to take a toll on Jeremy in his first career 450 main event. Even then, it took Eli 10 laps to even make a real charge in hopes of getting by.

Another factor that hasn’t gotten much attention was the widening of the NASCAR pit lane a couple of years ago. That widening took what used to be 12 feet of grass from the usable track and became concrete. That loss of 12 feet of width has changed how the tracks are designed. It essentially removed an entire lane from the track map and as Daytona is already in a tight confine, that was a tough blow to work around. To maintain an optimal lap time (rumored to be 1:08 or so), RC was forced to add several switchbacks and tight sections. I am sure RC knows that the tight turns aren’t great for racing but his hand is forced with the dimension changes. It’s just another factor that I don’t think many people know about but is a very impactful aspect.

Overall, Daytona is still an awesome event even if my buddy Steve Matthes doesn’t come anymore. The speedway feel is very unique and the history alone is enough to humble the field. Some aspects of Daytona have improved: the transitions are much better now that lime rock isn’t used for jumps, there aren’t wooden telephone poles underneath the whoops, and moving it to a night race removed the brutal glare that the late afternoon main event caused. I do think the longer track of old was better, though. Having 30-plus minute main events really separated the pretenders from the contenders.

Having the race at the end of Bike Week was better, too. There was more build-up as Bike Week reached a crescendo. Friday in Daytona was a madhouse and supercross took center stage the following day. The schedule now has people just arriving into town and many haven’t even arrived yet. It may not matter for most, but to me it just lacks the atmosphere that it once did due to leading off the week instead of ending it. Regardless, I will still take the good with the bad. Daytona is a race like no other and that’s just fine with me.