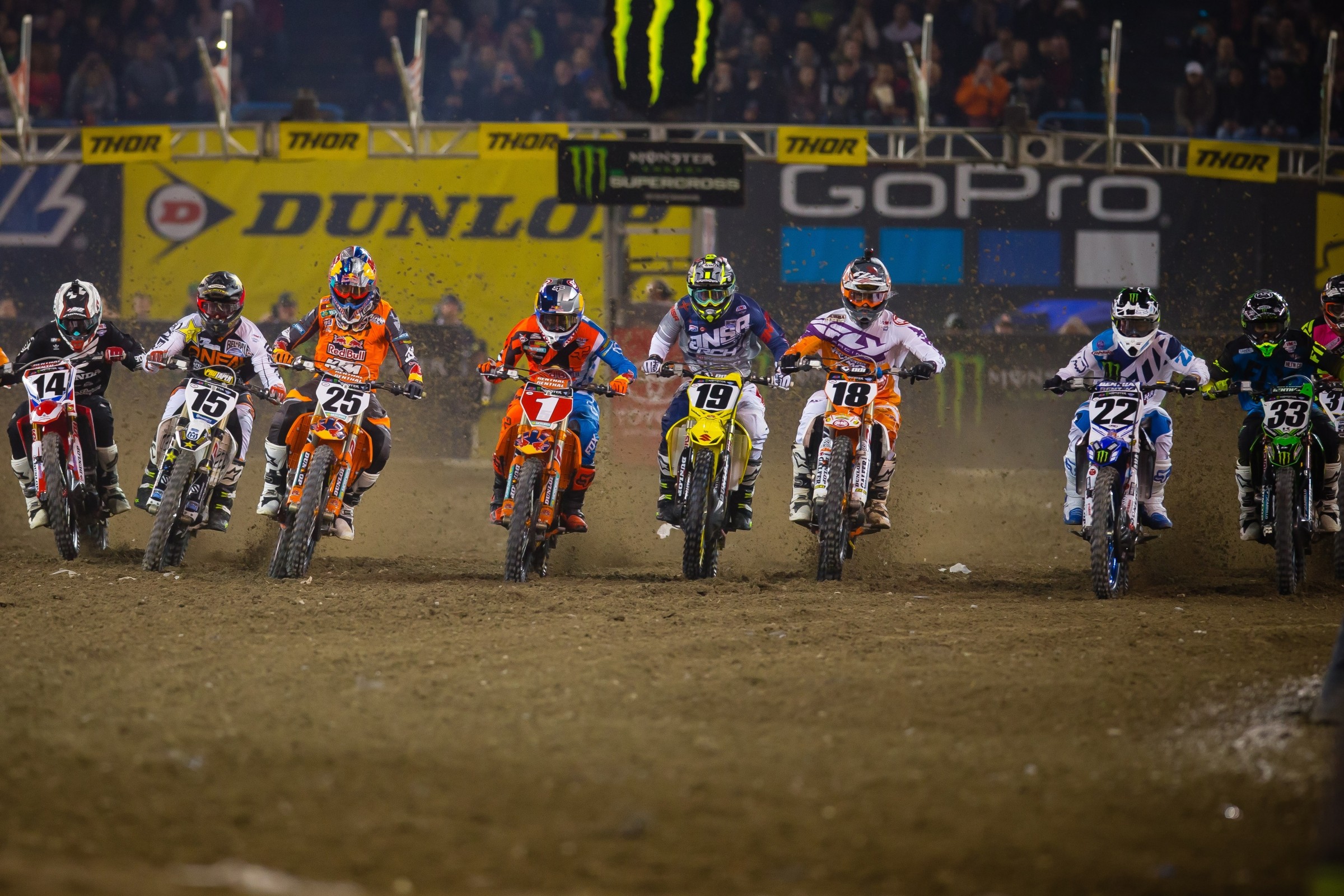 It was another wire to wire victory this weekend in Toronto, only this time is was Eli Tomac who jumped out to the early lead while Ryan Dungey was battling in the middle of the pack after a poor jump out of the gate. The starts seem to be more important than ever this year—as Chase Stallo mentioned last week in 10 Things to Watch—because six out of nine rounds have seen the winner lead every single lap.

In the 250 class, Zach Osborne was able to break away from Joey Savatgy in the points race after he went down late in the race. In a class with only nine rounds, those types of mistakes are even more costly than they are in the 450 class.

Now let's take a look at how the race broke down for the top three. You can see Eli Tomac really took advantage of his good start and broke away from everyone early on. He set his fastest lap on lap three, a 56.794, which was 2.083 seconds faster than Ryan Dungey and about half a second faster than the next fastest lap set by Blake Baggett.

From lap six through nine things seemed to even out a little bit as all three riders ran very similar lap times. Then Tomac kicked it up a notch and put some more distance between himself and the rest of the field.

Ryan Dungey was able to get around Broc Tickle on lap 16 and you can see a significant rise in Tickle's times. He was able to drop his time back down on laps 21 and 22, but by then it was too late as Dungey and Tomac were already cruising to the finish line.

Now that we're halfway through the series and have had some time to experience the new timed main event format, let's look at how the format compares to last year at this point in the season. Below you'll see a chart that indicates how many laps the riders have put on the tracks so far this season. This combines the heats, semis, LCQs, and main events for both the 250 and 450 classes.

So far we've seen 98 more laps compared to last year. Considering that last year they only turned 77 laps throughout the course of the night show, this is a lot. It's like the riders have raced an extra round! I do think it's important to note that the amount of laps turned on a track is probably more important to the riders than the fans because it affects how much the track breaks down. This has been a hot topic as of late as several riders have voiced their opinions on the tracks breaking down.

Ryan Dungey noted the amount of laps they are putting on the tracks after Atlanta. "Eighteen laps the 250s do. We’re doing 24 I think. It’s just a lot. If you take 20 more riders and every lap is times 20, that’s 20 more passes. So like last week there was 26 laps, that’s 120 more passes, just us. They had 19 laps, the 250s, that’s another hundred passes. So the tracks are breaking down a lot. I feel like we need more time to do a little more fixing. We were going through the whoops and we were skimming them all day and then we’re jumping them at the end. There’s not enough time to do any work. The tracks, it’s nasty. It really is, but it’s racing."

The time the riders are out on the track is what is important to the fans and while the racing hasn't been the closest, especially in the 450 class, we have gotten to see all of the riders on the track a lot more this year.

This year we've gotten to see about an hour and a half more racing compared to last year, and we're only half way through the season. You can argue whether or not it's better for racing, but there's no denying that Feld has been able to get the riders in front of the fans for longer while making it fit into the same three-hour program window.