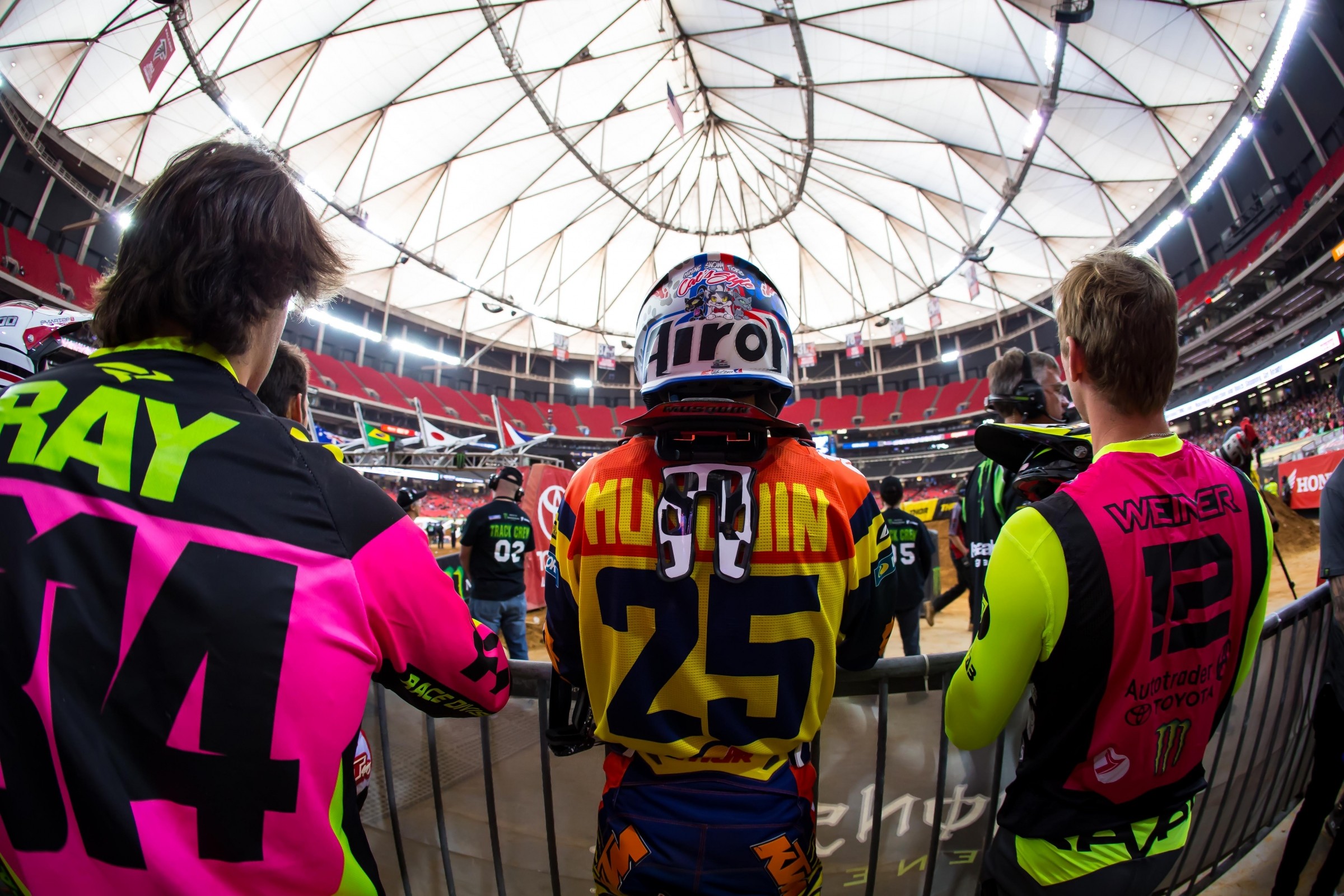 Rocky Mountain ATV/MC-WPS-KTM’s Davi Millsaps was a late scratch from the main event on Saturday night due to a wrist injury sustained in qualifying crash. Millsaps said he couldn’t avoid some other riders that were down in the whoops and that caused his crash. He skipped the second practice but returned for the third, but it was pretty obvious he was in pain and wouldn’t be able to compete. Millsaps said on his Instagram he should be back this weekend in Toronto. Despite not racing, Millsaps remains sixth in points, 14 ahead of Dean Wilson.

While battling for sixth, Red Bull KTM’s Marvin Musquin and RCH/Yoshimura Suzuki’s Justin Bogle came together, with Bogle getting the worst of it and going down. Bogle, clearly unhappy with the move from Musquin, let it by known in the form a middle finger. From what we heard, Bogle was furious with Musquin after the race and got up close to the KTM rider in the pits to let him known his feelings first hand.

“That was a bad deal,” explained Bogle in a team statement. “We really had a good night going. Had a great run in the heat race and got a great start in the main. I was up front, taking care of the bike and making laps. It stinks when another guy crosses a set of ruts and takes you out. We had a really solid night going, right up until that point. We’ll keep working at it.”

Through eight rounds, Cole Seely has yet to finish outside the top six. Seely, along with Red Bull KTM teammates Ryan Dungey and Marvin Musquin, are the only riders to finish inside the top 10 at every round this year. Seely was running in third at one point in the main but finished sixth, his worst finish since Anaheim 1.

“I got off to an okay start but in the second turn I got t-boned pretty hard by someone and their bar or lever somehow jammed into my bicep,” said Seely in a Honda HRC release. “It stung pretty bad but the adrenaline I think helped me fight through it for the first few laps. After that I just started to make mistakes, then one thing led to another and I found myself in sixth. I’m pretty bummed about that. I need to go back to work and revaluate some things this week. The bike felt good, I just need to work on myself.”

Since a podium in Glendale, Chad Reed has had some very un-Chad Reed-like results, finishing 8-19-16 over the last three rounds. Atlanta appeared to be a bounce back for Reed, as he set the second fastest lap in qualifying (typically not a strong suit for Reed) and got a great start in the main (top five). Unfortunately, Reed slid out after the whoops early in the race and could only manage seventh on the night.

In his first race back from a concussion sustained in Arlington, Smartop/MotoConcepts’ Justin Brayton had his second best finish of the season with an eighth.

Monster Energy Kawasaki’s Josh Grant secured his third top 10 of the season on Saturday with a ninth. Since returning from a hand injury last weekend, Grant has gone 14-9 in the last two rounds. “I started off great by qualifying straight out of the heat,” Grant said in a team statement. “My starts we’re on point, which helped my results all night. I think after having to take some time off due to my injury, I’ve bounced back well and am looking forward to next week.”

Dean Wilson also grabbed his third top 10 of the season on Saturday with a 10th. Its Wilson’s third top-10 finish since joining Rockstar Energy Husqvarna prior to Oakland. In a team statement, he said it’s the loosest he’s felt riding all year, but said he needs to figure out his starts. “I didn’t get a great start in the main—I need to work on that this week. I got into a good rhythm the second half of the race and got into the top-10 where I finished. I’m going to get ready for next weekend and try to get a better result."

It was a rough night for the AutoTrader.com/Monster Energy/JGR Suzuki team. Jake Weimer, who came into the race dealing with a back injury from Minneapolis, fell several times throughout the night and finished 18th. Justin Barcia, in his second race back from injury, took 16th. The lone bright spot was 250 rider Kyle Peters, who finished ninth.

Traders Racing Yamaha’s Luke Renzland is off to a solid start in 2017. Although he had to go through the LCQ on Saturday night, Renzland finished a career-high sixth. Also, after struggling with starts the last few years, he actually pulled the holeshot in both his heat and the LCQ. The finish was also a personal best for the team. Renzland has started the season with 8-6 finishes and sits seventh in points.

Fredrik Noren is rapidly improving in supercross. A few seasons ago, he struggled just to make main events. On Saturday, he finished a career-high eighth (his first career top-10) and it could have been better as he sat seventh late in the race before getting taken down by Adam Cianciarulo. Prior to the season, Noren told us this was the most prepared he’s felt coming into a season. “I feel a lot more prepared and a lot more confident coming into this year’s season than I’ve done in the past. I think just because I’ve got more experience and I’m learning more. So I feel pretty good.”

As for AC, he ran up front early in fourth, went down, recovered, was pushed off the track when Dylan Ferrandis went down, and came back to finish seventh. “I feel like I’ve been making some silly rookie mistakes, but I know that will come around when I get some more racing under my belt,” said Cianciarulo in a team statement. “Even with the mistakes that I made, I do think my racing is coming along after so much time away from supercross.” In case you’re wondering, this was only his seventh career supercross race. Cianciarulo also won his heat race earlier in the evening.

RJ Hampshire was the lone GEICO Honda rider in Atlanta’s main event, after both Christian Craig and Chase Sexton (more on them below) didn’t race the main event due to injury. Hampshire struggled on the track, and fell back to 10th late in the race after a crash following a top-five start. In a team press release, he said the biggest problem was the whoops. “It was a tough weekend. Struggled with the whoops from the start of the day and never really found a flow after that. I finished third in the heat race but felt like I was lost on my bike, was riding terrible. Got off to a decent start in the main, right around the top five and hung right around there till about five to go. I ended up going down on the landing of the finish and landed right on the hurt shoulder. So a bad night turned even worse. Had too many small mistakes all night that cost me big. But I’m okay—looking forward to Toronto!”

Pre-season title favorite Christian Craig missed the main event on Saturday after crashing in the whoops in his heat race and sustaining a concussion. The team hopes he will be ready for this weekend in Toronto. “My day was awesome before the night show,” said Craig. “I was fastest in the first qualifying and second in the last one. I liked the track and was probably one of the best guys through the whoops all the day. I jumped the gate in my heat, giving me a terrible start. I was making a ton of passes, an average of two riders every lap through the whoops! I slid out once, then made my way back up to fifth. On one of the last laps I was going for another two guys in the whoops, but there was someone crashed on the right side which left me frazzled with what to do. I kinda just lost it when I saw him down and crashed. I unfortunately got a concussion and wasn't able to ride in the LCQ or main. I'm super bummed with how these first races have gone. If you watch me in practice, you know what I'm capable of so it's hard to understand why I can't make it happen when it matters. Hoping to get clearance to ride early this week and be in Toronto.”

As we reported yesterday, Chase Sexton is out for the remainder of supercross after breaking his femur in qualifying. Sexton, who won the Horizon Award in 2016, has yet to lineup for a pro race and has suffered three big injuries (knee, wrists, femur) since turning pro.

Canadian MX2 champion Cole Thompson made his 2017 debut in Atlanta. Thompson is racing select rounds—Atlanta, Toronto, Daytona, Indianapolis, Detroit, and St. Louis—of the East Region before heading back to Canada. He finished 16th on Saturday.

A week after finishing seventh at the 250SX East Region opener, Anthony Rodriguez failed to make the main in Atlanta after finishing 10th in his heat and not starting the LCQ. According to his Instagram, Rodriguez had been dealing with food poisoning and actually spent Friday in the hospital.

“Defeat is not an option. One weekend behind, many more to come! I will show what I'm made off. Also big thanks to my girlfriend @cora_dsilva for taking care of me at the hospital Friday, for packing all of my stuff and driving me to Atlanta so that I could race after having the worst case of food poisoning.”