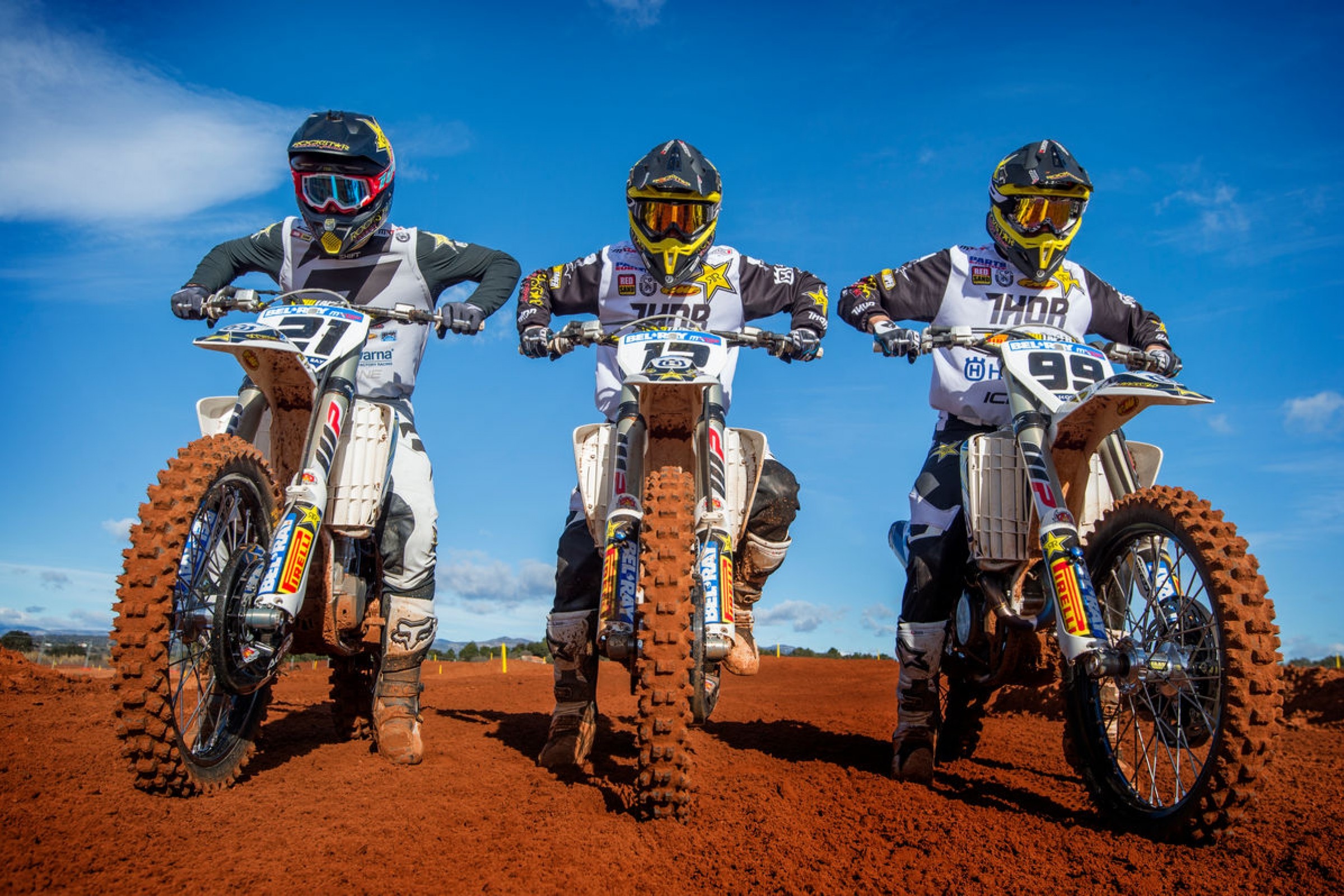 After years of titles from Antonio Cairoli, MXGP has taken on a youth movement of sorts recently, with rookie Romain Febvre winning the title in 2015, and another rookie, Tim Gajser, winning the 2016 championship.

This year, an even higher-profile rookie digs in for the MXGP title run in Jeffrey Herlings, who won the 2016 MX2 Championship after several injury-plagued seasons.

Gajser and Febvre will be there to slug it out again this year, and Herlings will join the gang, but warhorses like Cairoli, Clement Desalle, Max Nagl, Gautier Paulin, Jeremy Van Horebeek and more have won races before and want to do it again this season. Here’s your guide to the riders, teams, and numbers for the 2017 season, which begins this weekend in Qatar.

Notes: Like Romain Febvre the year prior, the 2015 MX2 world champion burst onto the MXGP scene in 2016, capturing the world championship in his rookie season. He won twice as many motos (15) as the next closest competitor (Febvre, six). The Gariboldi outfit, which Gajser has raced for since his MX2 days, now runs the Honda HRC operation, so this is the same team Gajser rode for a season ago.

Notes: Another solid season for Russian Bob in 2016 with five moto podiums—all of which came in the first 10 rounds. Bobryshev finished third at the opener a year ago.

Notes: The hype surrounding the three-time MX2 world champion’s move to MXGP has been stifled by a recent hand injury. Herlings underwent surgery on February 16 to repair a fractured fourth metacarpal—one of the five bones between the wrist and the fingers—sustained at the final round of the Italian Championship. Herlings recently told MX Large: "Qatar is going to be tough. I broke my hand 10 days ago, so to come here it’s going to be difficult, probably a lot of pain."

Notes: By many accounts, Cairoli had a “down year” in 2016, despite winning five motos and finishing second in points. Such is life as an eight-time world champion. AC was great during the pre-season, easily capturing the Italian Championship over GP regulars like Gajser and more.

Notes: You know Coldenhoff will be good in the sand.

Notes: The veteran has been hampered by injuries the last two years, missing nine rounds in 2015 and three rounds a year ago.

Notes: Jasikonis was brought on last year to replace the retiring Ben Townley.

Notes: Desalle entered last year nursing an arm injury and never got going in his first year with Kawasaki. After winning 13 motos in 2015, he won zero a year ago.

Notes: Tixier missed the first seven rounds of his rookie MXGP season a year ago. This year will be more telling as he’s had time to adjust to the 450.

Notes: After a podium-filled runner-up finish to Antonio Cairoli in 2014, Van Horebeek hasn’t been the same the last two years, with just seven moto podiums combined.

Notes: Febvre won six motos in his MXGP world championship title defense. He missed two rounds late in the season, which really hurt his championship cause.

Notes: Another steady year from the MXGP veteran in 2016. Aside from a few moto, Nagl was challenging for podiums at every round.

Notes: After two disappointing years with Honda, Paulin hopes to revitalize his career with Husqvarna. After three motos wins in 2015, he failed to win once last year.

Notes: Anstie makes the move up from MX2 (due to the 23-year-old age rule) to round out the three-rider team.

Notes: After two years stateside with Monster Energy/Pro Circuit Kawasaki, Tonus returns to MXGP with Wilvo Yamaha. Tonus’ career in the U.S. never had the chance to blossom due to illness and injury. This will be his first full season on a 450.

Notes: The fan-favorite privateer makes the switch from KTM to Yamaha.

Notes: Searle will miss the first four rounds of the championship due to a knee injury sustained this off-season.

Notes: Guillod captured one podium in his rookie MXGP season. According to MX Vice, Guillod has a “one-year deal with the Honda Red Moto team, but there is an option for a second year with Honda and it is also written into his deal that he is allowed to step over to the factory awning if one of their riders gets injured.” He is also making the switch from Yamaha.

Notes: De Dycker missed all of last season due to injury.

With Herlings moving up, the door is open in MX2. How wide open is this door? Only one rider in this class enters the season with a 2016 moto win or a career MX2 overall win under his belt, American Thomas Covington (Max Anstie has also done some winning and also moves to MXGP this year).

Those numbers are about to change as a huge crop of talent will get to breakthrough for moto and overall victories in 2017. Who will hold the red plate at the end of the season though? Here are the names.

Here are some of the names.

Notes: Seewer played second fiddle to Herlings a year ago, but he enters his final year in MX2 (due to 23-year-old age rule) as a title favorite. He had the most podiums of anyone (besides Herlings) in the class last year. He’s signed with Suzuki through 2019, so he already has a deal in place for MXGP next year.

Notes: Suzuki has a plan in place for the departure of Seewer next year. One piece is Australia youngster Hunter Lawrence. Prior to a knee injury, Lawrence was second in EMX250 last year. This will be his first full season in MX2.

Notes: Another young talent, 19, to emerge from the Netherlands. Vaessen raced a few rounds of MX2 last year and finished third in EMX250.

Notes: The 2015 runner-up to Tim Gajser in MX2, Jonass is expected to fill the shoes of the departing Herlings. Jonass did suffer a concussion at the final round of the Italian Championship, but is expected to race this weekend. He, along with Seewer, is on many people’s list of title favorites.

Notes: Tons of hype surrounding the Spanish teen. He battled with Herlings—for a moto anyway—at the GP of Netherlands last year before finishing second, during his brief stint in MX2 (he raced just three rounds). The rest of the races where much quieter. This year will mark his first full-time season in MX2.

Notes: The Russian missed seven of the final eight rounds a year ago due injury.

Notes: The Washington state native moves up from EMX250 to MX2 for 2017. After some adjustment, he was super fast with Bud Racing Kawasaki last year. Can he challenge for wins in his rookie year?

Notes: The young French rider is bypassing EMX250 and heading straight to MX2 after racing in EMX125 last year.

Notes: He missed the final two rounds in the U.S. a year ago, but did land two moto podiums.

Notes: The Brit missed nine rounds due to injury in 2016.

Notes: You probably remember this name from the Motocross of Nations, where Paturel was part of the winning French team. Like Seewer, he couldn’t match Herlings last year (not many could), but should be a title threat this year.

Notes: Ostlund took over for the injured Julien Lieber last year and returns for a second year in 2017.

Notes: Missed five rounds due to injury last year, but came close to the podium a few times.

Notes: The 2016 EMX250 world champion moves up to MX2 full-time in 2017. He competed in two rounds last year and had good results—eighth and fifth overall.

Notes: How wide open is MX2 without Herlings? Covington is the only rider to have won a moto last year that is competing in 2017. This is the American’s second year with Husqvarna.

Notes: Another young rider moving up from EMX250. Mewse did compete in 11 MX2 rounds in 2016, so he does have some experience.

Notes: If the name sounds familiar it should. He’s the rider that landed on Jason Anderson at last year’s Motocross of Nations. This is his first full year in MX2.

Notes: Injuries have sidelined the former moto winner for the past 17 months. Prior to injury, he was a podium threat at most rounds. He’ll be on his own team this year.

Notes: The Dutch teen once billed as the replacement for Herlings at Red Bull KTM will switch to the Dutch-based HSF Logistics KTM team for the 2017. Pootjes has a deal with KTM factory until 2019. He missed most of last year due to injury.

Notes: Keep an eye out on Bogers heading into this year. A lot of people are high on him as a title contender.

Notes: The lone factory TM rider, the Italian could contend for podiums on occasion.

Excited for tomorrow, all set here in Qatar thanks to everyone who is helping!

Notes: The Suzuki prospect, once thought to be headed to the U.S., has switched to Husqvarna for this year.