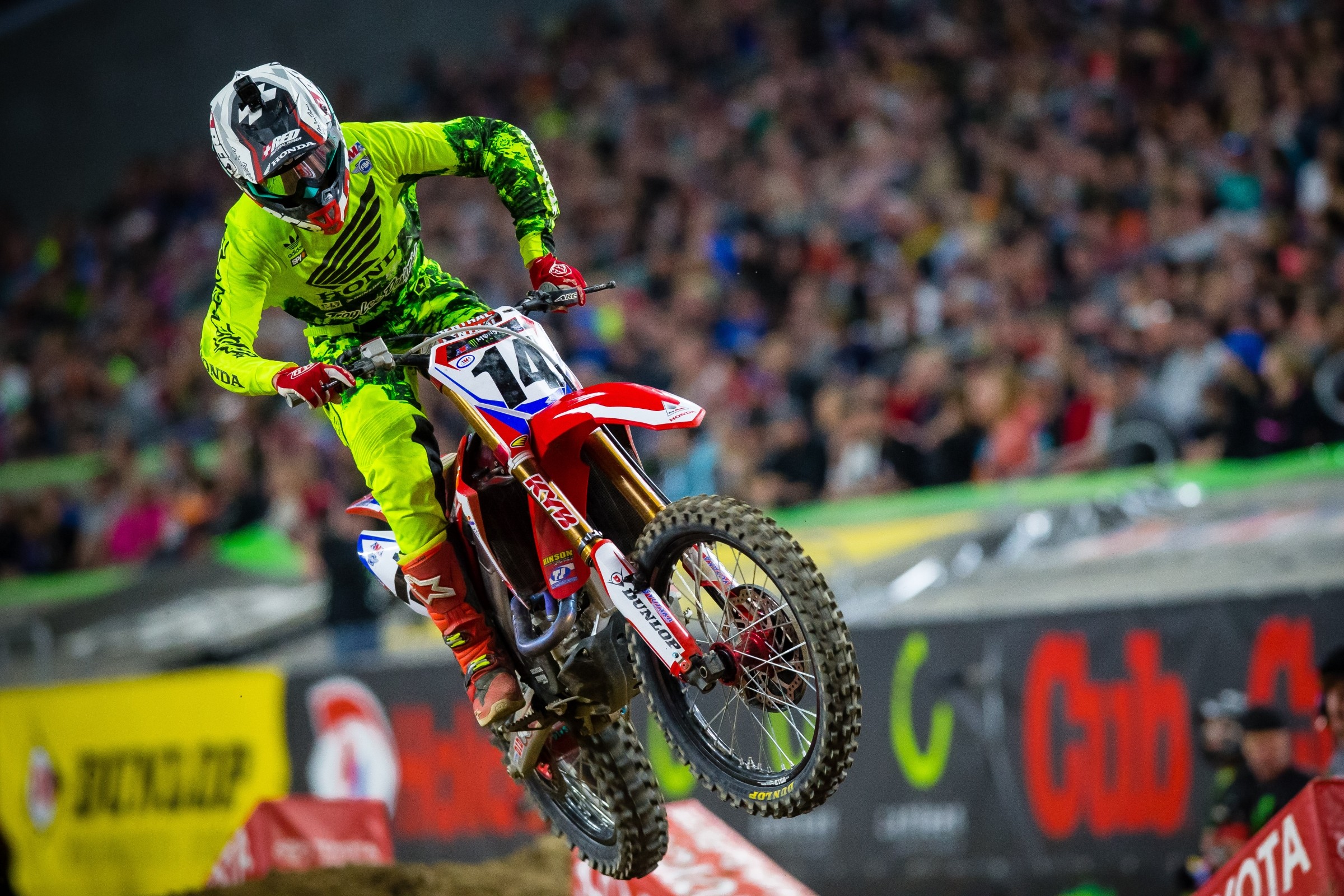 After jumping out to an early lead in Minneapolis, Honda HRC’s Cole Seely was looking to sprint away from the pack as Eli Tomac and Ryan Dungey worked their way around Davi Millsaps. Instead, Seely would go down in the corner before the whoops and found himself sitting in 10th place after lap one.

We caught up with Seely after the press conference to talk about the tricky Minneapolis track, his practice strategy, and how it was working his way through the pack.

I got a great start! I had a terrible first lap though. It was good though, I’ve been kind of searching for that all year. I haven’t really found my groove with my starts, but I knew it was there so I haven’t really been stressing about it. But I just threw it away. It’s a bummer but I was still able to fight back to fifth, which is good in such a stacked class.

You did drop a bunch of spots on that first lap.
Yeah. I had an off day I think, and to be fifth still at the end of the day, it’s still good. There’s definitely some positives to take away, and I’m going to focus on those over the negatives.

In the first practice a lot of the guys were doing different options on those two dragon’s backs. In the second practice you all pretty much did the same line. Did you go back to the truck between the first practices and see it was faster?
Everybody has footage of everything and everybody times that footage. You really can’t get away with too many secrets out there anymore. Once somebody does something fast everyone sees it in the trucks and in the next session we apply that. I really liked that section. I didn’t know how it was going to play out, it was kind of awkward with two dragon’s backs in a row, but it was cool how we could skim into the first pocket and jump over the next two. That’s something new, I’ve never really seen that.

When you see a line you think might be faster, do you guard it? Do you maybe not do it in an attempt to keep it a secret?
No. I’ve thought of that, but at the same time, we’re so close in times that any little advantage, you have to pull it out. In the second practice I think [Dean] Wilson was a 48.2, I was a 48.2, and [Ryan] Dungey and [Jason] Anderson were all in the 48.2s I think.

Second through 13th were all in the 48-second range.
Yeah, it’s crazy. So like I said, you can try to hide something but everyone is going to see it if you do it even once, so you might as well do it the whole time because everyone is so neck-and-neck with times out there.