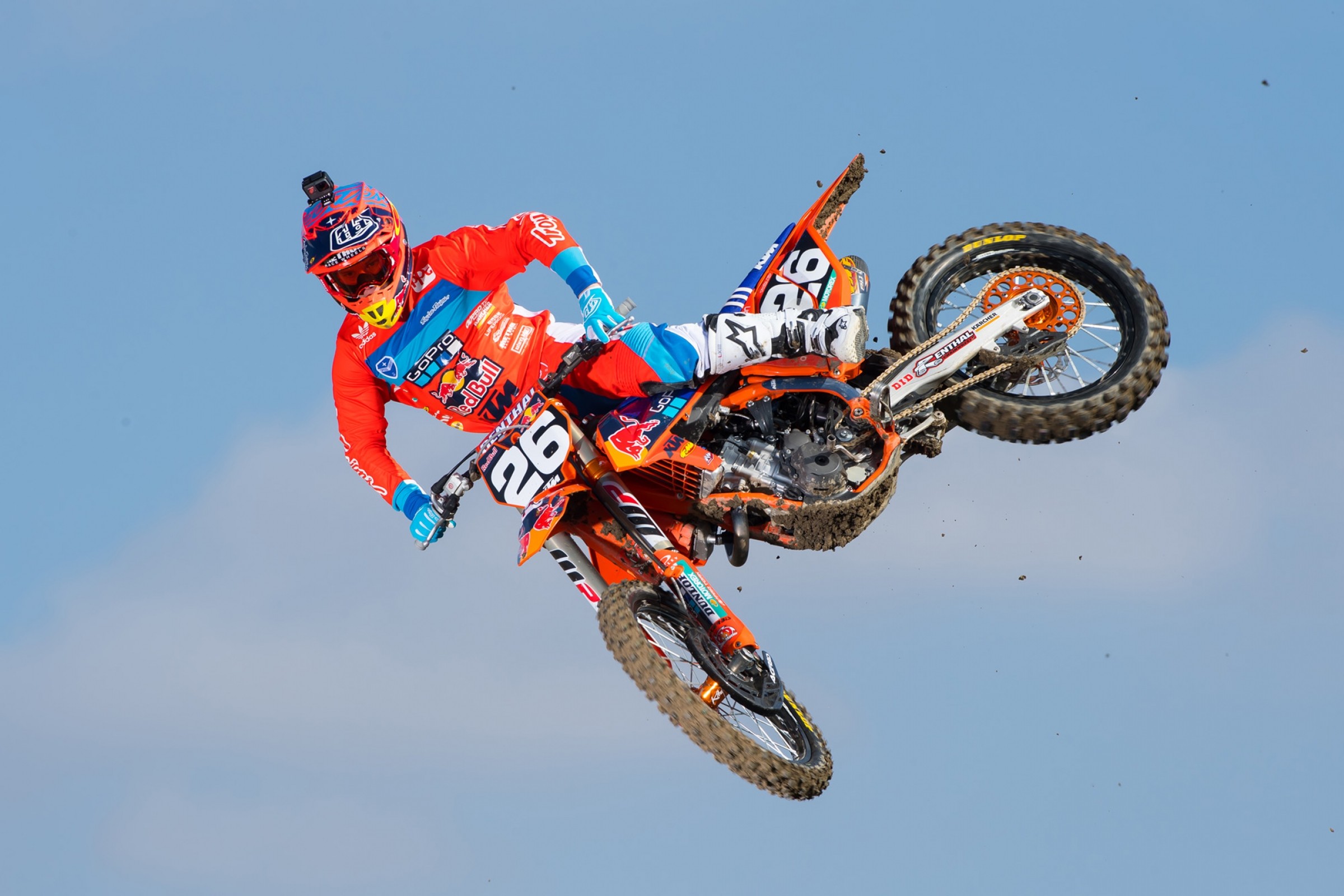 It’s easy to forget how accomplished Adam Cianciarulo was as a rookie in Monster Energy Supercross. In 2014, he won three of his first five races, finished runner-up in the other two and held a 17-point lead after five rounds before sustaining a shoulder injury at round six. That night foreshadowed the next two years, as AC missed all of supercross due to shoulder injuries. He’ll make his long-awaited return this weekend, and one person that isn’t counting him out is his Monster Energy/Pro Circuit Kawasaki teammate Joey Savatgy. “I don’t want to say that people are counting Adam out, but I think because of his history and the injuries that he’s had, people are very quick to forget that guy can ride,” he told us earlier this week. We’ll see how AC fares in his return on Saturday. –Chase Stallo

Prior to last season, Joey Savatgy had earned just four podiums during his career. He nearly doubled that total in 2016 with six podiums, which included three wins, en route to second in points. Racer X’s Eric Johnson asked Savatgy this week about finishing one-point shy of his first career championship last year. “As far as me, personally, there was nothing for me to be upset about,” he said. “Like Ricky told me before the race, the only thing I could was to do everything in my power to win the race. I was able to get a good start and put ourselves in a position to win and we won the main event and that’s all I could do.” Savatgy is on the short-list of championship favorites. How will he do this weekend? –Stallo

Since the start of 2015, Zach Osborne has six podiums in Monster Energy Supercross, but is still searching for his first career win. The veteran is now training alongside Ryan Dungey, Marvin Musquin, and Jason Anderson full-time at Aldon Baker’s compound in Florida. “It’s been a great change to get to train with Dunge, Marv, and Jason every day—it’s kind of pushed my level a bit,” he told us recently. Another change for Osborne this year will be riding the East Region, as he’s spent the past five seasons riding the West Region. –Stallo

In his first full season since coming out of retirement, Christian Craig had a career-year in Monster Energy Supercross in 2016. Not only did he win his first career race, but he had a career-high four podiums as well. Craig picked up a new riding coach this off-season in David Vuillemin and for the first time in his career will race the 250SX East Region. A 17th at the opener in 2016 thwarted his title hopes, we’ll see how he beings this year on Saturday. –Stallo

After spending the last four years on Yamaha, Alex Martin will make his debut with KTM on Saturday. He told us earlier this month that riding with Troy Lee Designs/Red Bull KTM teammates Shane McElrath and Mitchell Oldenburg and seeing their success on the West Region has helped his confidence. “Most of the testing we got out of the way in November and December, and now we have a pretty solid base package. It was good for me because I got to ride with Shane and Mitchell day-in and day-out in the off-season … to see where I stacked up against them and it gave me some confidence.” Martin struggled in supercross last year before turning it around in Lucas Oil Pro Motocross. Can he get back to podium form in his home state this weekend? –Stallo

U.S. Bank Stadium, the newest place to host a round of Monster Energy Supercross, is big. How big? The $1.13 billion (billion with a B) structure is twice the size of the old Metrodome it replaced! That means track builders should have plenty of room to put together nice track without having to make a bunch of sacrifices for space. Will it make for a racing surface with multiple lines and more working options? Right now it's hard to tell, but it's definitely something to keep an eye on come Saturday. –Aaron Hansel

There weren’t very many people who didn’t feel for Marvin Musquin last year after he suffered a heartbreaking last-second loss to Ryan Dungey in Atlanta. Heck, even Dungey, who got the win (and likely a lot of bonus money), felt bad for Musquin. That first 450SX win eluded Musquin for the rest of 2016, but he finally brought it home by taking the checkers in Arlington. With the invisible barrier now broken, could we see Musquin click off another in Minneapolis? -Hansel

What a race for Dean Wilson in Arlington! In just his second race with Rockstar Energy Husqvarna Factory Racing, he found himself in fourth for a good portion of the race, refusing to crack despite immense pressure from the defending champ. Dungey eventually got around Wilson for fourth, but Wilson still took fifth, which is remarkable considering he only had two days on the bike before Oakland. With a learning curve this steep, is it nuts to think, with a good start, Wilson could contend for a podium? -Hansel

Last weekend Dungey had the worst night of his season. He finished fourth. And increased his points lead. If you’re competing against him statistics like that have to be demoralizing, although Dungey probably wasn’t thrilled either. He finished off the podium for the first time since clinching the title last year and hasn’t won a race since round three. But with Monster Energy Supercross heading to Minneapolis, Dungey’s hometown, it’s the perfect time for the champ to get back in the winner’s circle. -Hansel

Before the season there was plenty of chatter regarding how fast Justin Barcia was going on his new Suzuki, and by all accounts he was positively tearing the JGR test track apart. Unfortunately, we never got to see that speed in Monster Energy Supercross—Barcia injured his wrist before A1 and has yet to race in 2017. That ends Saturday night in Minneapolis, where Barcia will make his first appearance of the year on his new bike. -Hansel