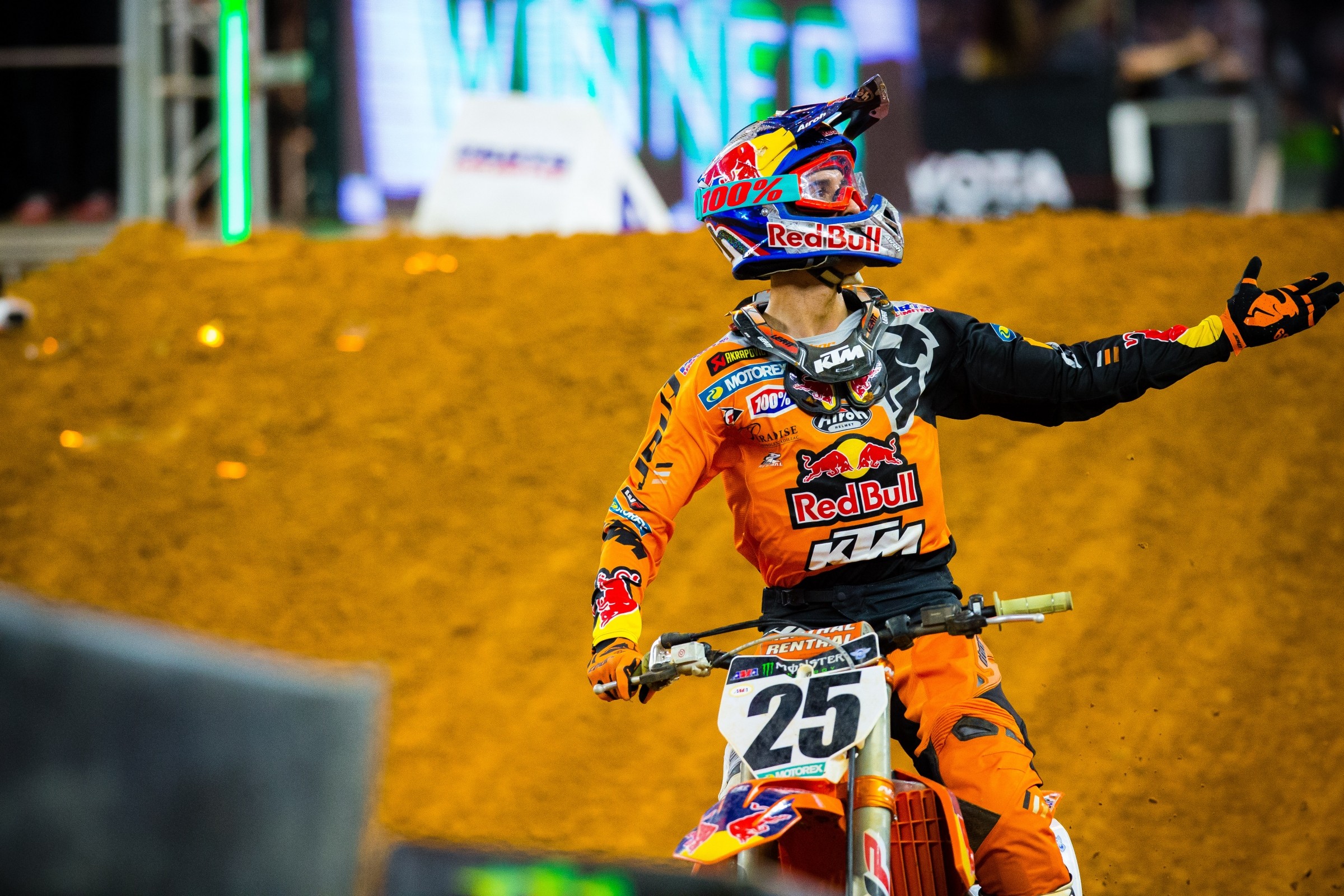 Breakdown Patience is Still a Virtue

Marvin Musquin finally got his first 450SX win. After coming ever so close last February in Atlanta, he finally sealed the deal on Saturday. Most didn’t think it would take nearly a full year to get it done, but with Ryan Dungey’s incredible season coupled with the rise of Ken Roczen and Eli Tomac to finish off the 2016 supercross campaign, it was tough sledding for Marv. This season, he started strong. He was on the podium in the first three rounds, just off the pace of Dungey and Roczen, but surely the best of the rest. His next few rounds were rough as bad starts and crashes caught up to the likable Frenchman. He lost his runner up points position to Eli Tomac in that span, losing touch withDungey in standings in the process. This past Saturday, though, he was back on his game, dominating the entire day.

Marv is a precise rider. He uses supreme bike skill and technical expertise to find smooth lines and unique approaches to a given section. His skill set doesn’t always serve him, as the tracks that demand next-level aggression seem to be tougher for him to excel on. When the tracks require more brawn than brains, he suffers. On a track like Dallas (never Arlington for me), though, when aggression will promptly put you on the ground, Marvin is a world-beater. He’s able to find traction with smooth throttle control in a ways similar to what Kevin Windham did for decades. He will look at a combination of jumps and see it with a different perspective, opening up the playbook for how to execute a lap efficiently.

On Saturday, there were two sections where he was absolutely the fastest rider all day. The first was just before the finish line in a tricky on-off tabletop rhythm. Most riders had two options here. The most common and easier choice was to jump completely over the tabletop and double into the turn before the finish. It was easy and consistent. The problem was that it wasn’t very fast. Seat bouncing to get over the tabletop popped riders up higher than they wanted. That also put riders into another slow double, wasting time and speed before the finish. Simply put, it was an easy option but very slow.

The other option was to step on to the tabletop and then step off across that gap. This was the ideal line but became too tough to do. All of the riders who were down-siding the tabletop also were taking the edge off of the needed take-off ramp. Every time a rider landed on the downside, their rear tire knocked off more and more of that ramp. It just became too difficult and left riders casing the next jump, bouncing wildly into the final single and all out of whack before the finish line jump. While riders may have been able to pull this off for one qualifying lap of fury, it was not a viable race option.

This is where Marvin’s technique and skill came into play. What he was doing is a bit hard to describe but I am going to give it a shot. As that far edge of the tabletop became worn off, he would still step off but with different intentions. He knew he wouldn’t be able to clear the next jump completely with the lack of lift but he also figured out a way to soak up that last face. He would allow his rear wheel to drop into the gap but kept his front end high. He found a sweet spot where he would absorb the impact but still be able to clear the final jump from the bounce. Instead of popping up, he would shoot forward. If he had gone slower and fell further into the hole, he would bounce up high from the take off impact. If he jumped further, he would case that next take off far too hard as I described earlier. This singular way of blitzing through it, though, was faster than any option. He was able to avoid the initial pop of seat bouncing over the tabletop, was able to carry speed off the tabletop and still able to clear the double before the turn. It was fast, consistent, and unique. Textbook Marv.

The was also easily the fastest rider in the second set of whoops. If you have ever heard me talk about Marvin and whoops, you know that I have been critical of his speed in big, blitzing whoops. When jumping the whoops doesn’t work out, he has a bit of liability. He can blitz, sure, but he has shown that he has a bit of an issue when compared to the other world class riders he is trying to beat.

The other side of that coin is when blitzing becomes troublesome and finding a rhythm is the ideal route. This is when Marvin shines. He used his talent to perfection in the main event on Saturday. He was able to wheel tap-jump into the middle of the whoops (five or six deep) and then hop all the way out. While his competitors were trying to blitz through the evolving rut and unable to really apply much throttle, Marv was simply checking out. Not only was he faster, he was saving energy with his hop in and hop out. Now, some will say “why didn’t the other riders just start jumping?!!” That’s an obvious and valid question from a casual observer but most of the riders haven’t developed the skill set that Marv has in the whoops. Marv’s blitzing struggles over the years have led him to hone this alternative method. He developed this out of sheer necessity but when the conditions are right, it’s the superior method. A deficiency developed this strength and when viable, it’s lethal.

I know this all too well because I also suffered in the big, nasty whoops of supercross. I spent years practicing with Chad Reed and he would mock me and my struggles daily. He was a whoop wizard and never dealt with the problems that I did when it came to shifting up and committing to a stadium length set of whoops. The side he would never admit, though, is that when whoops were reduced to rubble, my years of jumping shone through. Watching him try to practice jumping whoops at his house was great fun for me because, honestly, he was terrible at it. He never really needed to develop the timing and patience necessary for a technique that I, and more importantly, Marvin did. It’s a technique that isn’t always needed but when the opportunity arises, like it did on Saturday, it’s incredibly effective.

As he grabbed the holeshot in the main event on Saturday, I silently waved bye bye to Marvin. I was positive that he would run away on that track in those conditions. The whoops were prime for his abilities, and the track was deteriorating in a way that over-riding it would lead to serious consequences. Marvin is so good at finding a track’s limit and not pushing past it. Where Eli’s aggression is impossible to overcome when conditions allow it, Marvin’s patience and efficiency is equally as powerful on a track like Dallas. He knew where he could push and where he had to stay patient. Where so many riders were overly aggressive with braking, Marvin was conscious of that and allowed the front end to roll through the corner. The traction was down to a point where aggression was the enemy. That’s Marv territory and he made the most of it. It was a master class of taking what a track is giving and nothing more. In today’s world of hyper-aggressive, high-revving supercross, Marvin showed that sometimes patience is still a virtue.