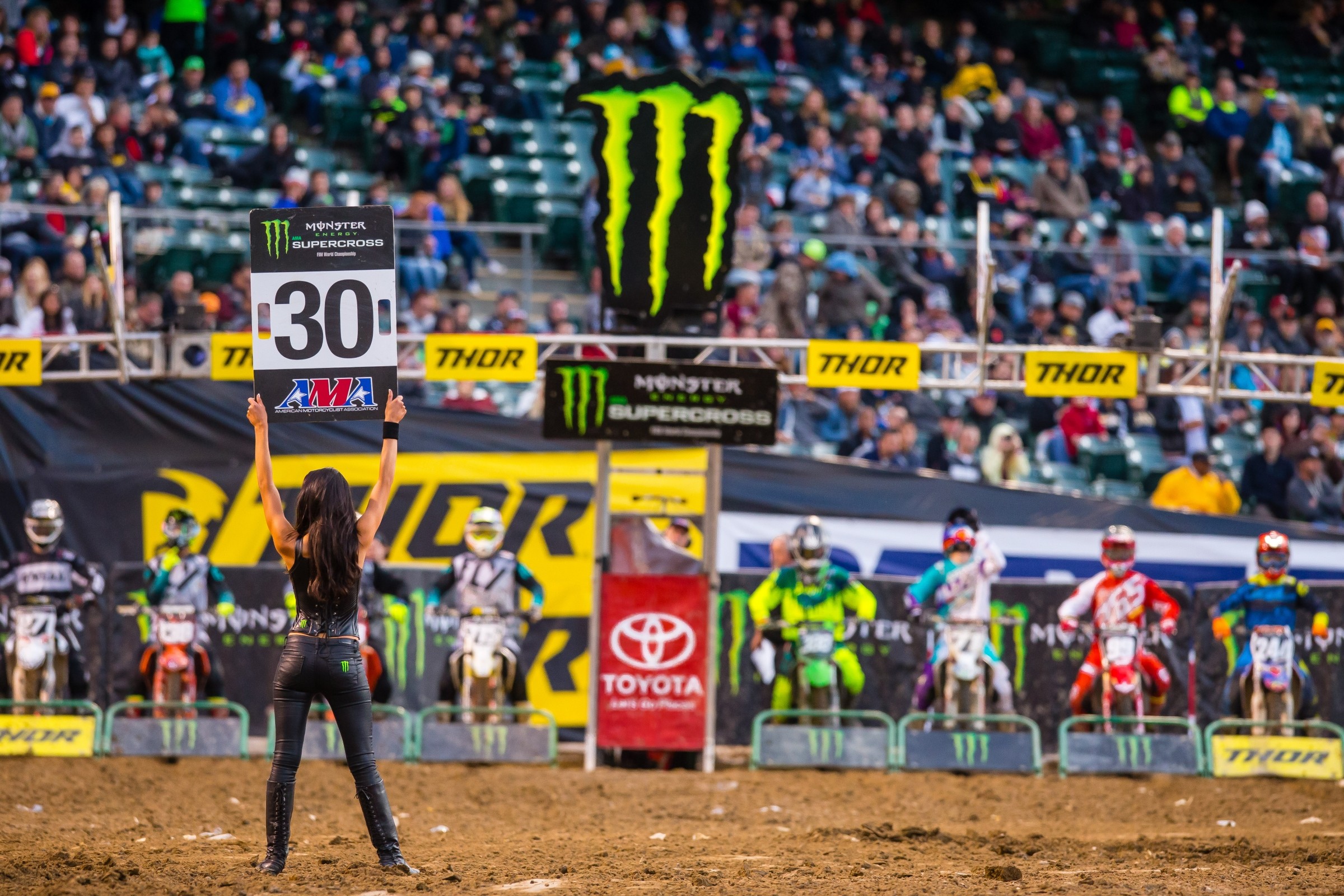 In the last visit to an outdoor stadium for a while, the supercross tour was “blessed” with more rain in the days leading up to the event. The Dirt Wurx crew did an amazing job to salvage the track inside the Oakland County Coliseum, but ruts, bumps, and kickers still worked their way up due to the soft conditions. It made for a treacherous night, but Eli Tomac made riding the track look as effortless as possible. A quick look at the rest of the field late in the race quickly put into perspective how good Tomac was riding.

If you looked at the condition of the track at the end of the 450 main event you may have thought to yourself, “Well of course it’s beat up. The races are way longer this year.” Along with the interference of lappers, track deterioration was a concern that gets mentioned repeatedly when we mentioned the new format. And yes, the new timed-races format did result in more laps than what would have been logged using the old format. But it’s not as drastic as you might think.

As you can see, over the course of the entire night, only six more laps were logged under the new format. That’s only a 7.7 percent increase. By the way, the 450SX main event ran 21 laps, only one more than the old 20-lap format.

Now let’s look at how the top three 450 competitors' lap times broke down.

As expected all three riders’ lap times rose as the night wore on. You’ll notice that Ryan Dungey logged the fastest lap time, but you’ll also notice he was wildly inconsistent lap to lap. After lap seven he was only able to string together two laps in a row that were within the same second.

Cooper Webb was a little better, but on lap 13 (the lap after he was passed by Tomac) his lap time skyrocketed. Webb said this was mainly due to overthinking. “Then I saw he was doing that rhythm section [triple-quad], and like he said, he [Tomac] kind of got going especially about halfway, right about when I started thinking a lot. It’s tough. How much effort do you put in? That line of pushing it and getting a little sketchy and trying to have a good race,” he said. “For me I think that’s when it kind of hit. Once he got around me I tried to stay with him a few laps and made a few mistakes, and that’s when I almost settled and kinda just rode it out.”

Webb also had a few bad laps while dealing with mud stuck in his rear brake pedal, and eventually he had to slow down to kick the mud free. Note that he got back on the gas after that to make sure he could hold Jason Anderson at bay.

Now look at Tomac’s laps. He was a couple tenths off of Dungey and Webb’s best times, but from lap eight on he was able to keep his lap times consistent, avoiding large mistakes in the rutted sections. From lap 14 to 18 is where he did the real damage, hovering around the 1:00-1:01 range while Dungey was logging laps in the 1:02 range.

But where was he making up this time on Webb and Dungey? The triple-quad after the start straight seems like the obvious answer, so I gathered some footage of Dungey and Tomac both cleanly doing the sections around the same time in the race to see just how much time Tomac was gaining. (Note: I know this method of timing isn’t perfect, but it’s the best we have without looking at their LitPro data.)

In this example Tomac was able to gain .17 seconds on Dungey which doesn’t sound like a lot, but when you consider it’s ONE section not including the turns before or after it, it’s a significant amount. Also remember that we're looking at them cleanly making it through, but this difference could increase even more if Dungey hangs a wheel getting on or off the tabletop.

Dungey also lost time in the dragon’s back section after the sand. This is where most of the riders where having the hardest time maintaining consistency, but again, we’ll take a clean example from Dungey and Tomac around the same time in the race and compare.

When Dungey was at his cleanest through this section he was only losing about a tenth of a second, but this is also where he lost big chunks to Tomac. Whether it was dabbing a foot or hesitating to get in the correct rut, Dungey's times in this segment of the track varied from 19.9 seconds all the way up to 23.1 seconds.

The 250 Class gave us yet another great race. For a while, Justin Hill was looking to make it a boring night at the front of the back, but a tip over in a right hand corner caused all of our heart rates to spike.

Hill did an amazing job recovering. Before the crash, he was running 1:04 lap times. After the crash, when he logged a 1:10 lap, he got on the gas hard, running off two 1:02 laps in a row to pull back away from second place Martin Davalos. Jumping back into the 1:02s on laps 13-14, after a crash and under pressure, while feeling sick, is impressive.

If you looked a little further back from Hill you might have seen Shane McElrath and Jimmy Decotis in a race-long battle. Their times are as close as Marvin Musquin and Cooper Webb's were last weekend in Phoenix, but look at how they Yo-Yo with each other.