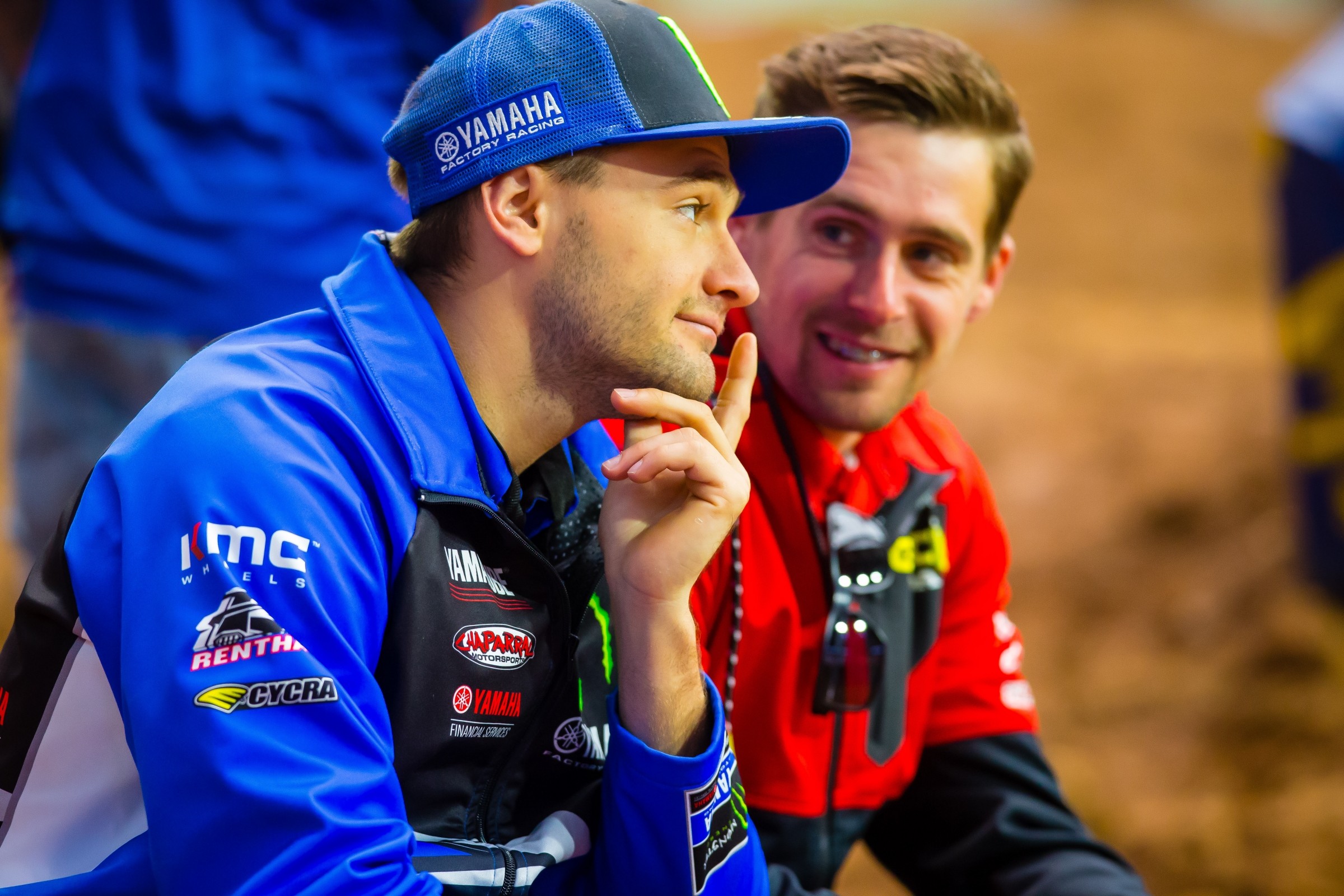 I’ll start with a pair of emails I got on Sunday night, although posting them is a violation of rule one when dealing with irate emailers: don’t give them attention, that’s exactly what they want. Whatever, this is too good not to share, although also too harsh for me to use all the words. So, pardon some editing, here’s two emails from the same dude. Hopefully he’s loving the attention:

Hey Dumbass Jason Anderson has been putting down riders for years. You probably love Barcia one of the dirtiest riders in history.

Anderson will never be a winner and You will always be Wrong about everything.

There you go. Look, I’m not going to try to systematically win an argument and prove that this dude is wrong. In fact, you might be able to prove fairly accurately that I’m a @$#^. Plus, this guy is not alone with Anderson hate. My Twitter started blowing up on Saturday night and then continued all week after Anderson, 1.) Put himself and Cooper Webb on the ground in a heat race and 2.) Showed me his arm was all jacked up after his crash with Vince Friese in a heat last week.

Live by the sword, die by the sword, right? Well, now A LOT of fans seem to want Anderson to die by that sword, just like they were out there with blunt objects for Friese last week after he ran into Anderson. Or did Anderson turn down into Friese? Hard to say because opinions go all over the map when two riders collide. As proof, last week I literally had people sending me the same screen shot of the Friese/Anderson on-track collision, with some people saying “Look at this! Clearly it’s Friese’s fault” and some saying “Look at this! Clearly it’s Anderson’s fault!” Same picture, two clearly different reactions. Yeah, so clear.

(Writers tip: We often use the word “collide” in these situations because it doesn’t imply that anyone was at fault. No one will deny Anderson and Friese collided at Anaheim. But I can’t say Friese took Anderson out, or Friese blocked passed Anderson, or Friese rammed Anderson, because not everyone can agree on that. Collide? Oh yeah, we’re all good there. Use that word next time you’re trying to be diplomatic.)

There was extra gasoline on the Friese fire (burned at the stake?) after our man Steve Matthes defended him, saying the pass on Anderson wasn’t actually dirty, so in reality Friese was getting railed on by people (and Anderson) for no reason. Now, it’s true that of Vince Friese’s greatest hits, the Anderson crash up would only be a B side (Google that, kids). But Vince earned that ire with about 40 other rough-riding incidents through the years, and we didn’t even need to use the word collide to soft-sell them, because most were straight-up take outs. Yeah, Friese has crossed the line before, and I think he gets extra heat because a lot of his moves are done to block people from passing him, while others (like Anderson) make aggressive passes while trying to move forward.

Last week on the Pulpmx Show, Blake Wharton told me he and Vince once went down in the first turn at Budds Creek, and on the first lap, while battling for last, Vince took him out for no reason. This stuff has been happening for years. At this point, all judgment calls are going against Friese, and he’s probably going to catch the blame for any crash within 10 feet of him. Because, you see, people are angry, VERY ANGRY over this rough riding stuff. They get really, really angry and my Twitter reflected that in the days after Anaheim 2. People were going off after Friese hit Anderson. People. Were. Mad.

I get that and I was fine with it. Vince has “collided” with tons of dudes on the track before so this rep is earned.

Similarly, now they’re mad at Anderson, as his greatest hits list grows. When I posted a photo of Anderson’s arm on the Racer X Instagram feed on Saturday night, with his explanation that he didn’t mean to crash into Webb, and just came into the sand too hard and got out of control, it ignited a firestorm of comments, running the gamut from Friese sucks for doing that to his arm to Anderson sucks and gets what he deserves for riding too dirty. There’s a small debate-within-the-debate over if the Friese and Anderson are just straight mean guys with intent to do harm, or maybe just guys that make bad decisions. For the most part, most people aren’t in the mood for that kind of debate. They’re just straight up mad. All this week, folks (see emails above) have been imploring me to bury Anderson since I didn’t come to Friese’s rescue last week. When Matthes said Friese was innocent, I said he wasn’t due to his previous rep. But doesn’t Anderson have a bad rep, too?

But how about I just not care about either? I mean, seriously, why does rough riding and contact on the track get people so damned angry in the first place? Doesn’t the idea that you can make contact out on the track make dirt bike racing unique to all motorsports? Isn’t drama and conflict one of the best things about any sport? Isn’t it great that all the riders are different, and some are well known to have different tendencies? I’m glad that fans know Jason Anderson will run it in on dudes to make a pass, and I’m glad people say “Uh oh” when Friese is in a battle. I like that. I’m not going to say either rider is a saint. But what I am going to say is I am not offended when they do stuff like that.

You know what else? I’m also not offended by retaliation, as long as it's executed safely. An angry mob of riders getting mad at Friese? Anderson or Weston Peick swinging at him? Cooper Webb complaining to the officials about Anderson? All good in my book. If Webb wanted to retaliate and take Anderson out in a corner last week, I’d be okay with that too. And if Anderson wants to come into the final turn fighting for the last transfer spot WFO trying to go checkers or wreckers to make the pass, I’m okay with that. And if Webb is mad and wants to take it into the tunnel to complain? All good in my book. This is supposed to be good, hard, competitive racing, and since we’re often begging for riders to show more emotion and personality, and to be less robotic and vanilla, I’m not going to tell them to turn off the rage when someone “collides” with them.

These incidents have been part of the sport since its inception. Start talking about the awesome bench racing memories of the past, the smiles often come when discussing the real feuds like this. That stuff will make you laugh, it will make you cry, and it will make you laugh so hard you can cry. Chicken versus Bradshaw? That stuff looks like pure gold. Hannah’s Saddleback Massacre on Kent Howerton? Bring it. Personally, I remember Mike Brown ramming Ernesto Fonseca in what seemed like 12-straight motos during the 2001 125 Nationals, and then Ernesto finally having enough and hitting Brown as hard as he could at Kenworthy’s for revenge. But Ernesto was too small, and Brown didn’t even move! I still smile thinking about this, which happened for like third place at some random National 16 years ago. But I’ll never forget.

Speaking of Brown, we toasted his career on this site a few years ago, I told some more “Mike Brown gets pissed off and will ram you” stories and people saluted him for being a badass racer. People love that stuff looking back on it.

The only good part? When we witness another heated moment on the track, and the comments explode, there’s always one guy in there to say “Hey boys, this is motocross not tiddlywinks. Get over it. What would Bob Hannah have done?”

I’ll take the on-track contact every time. Why you so mad, bro?