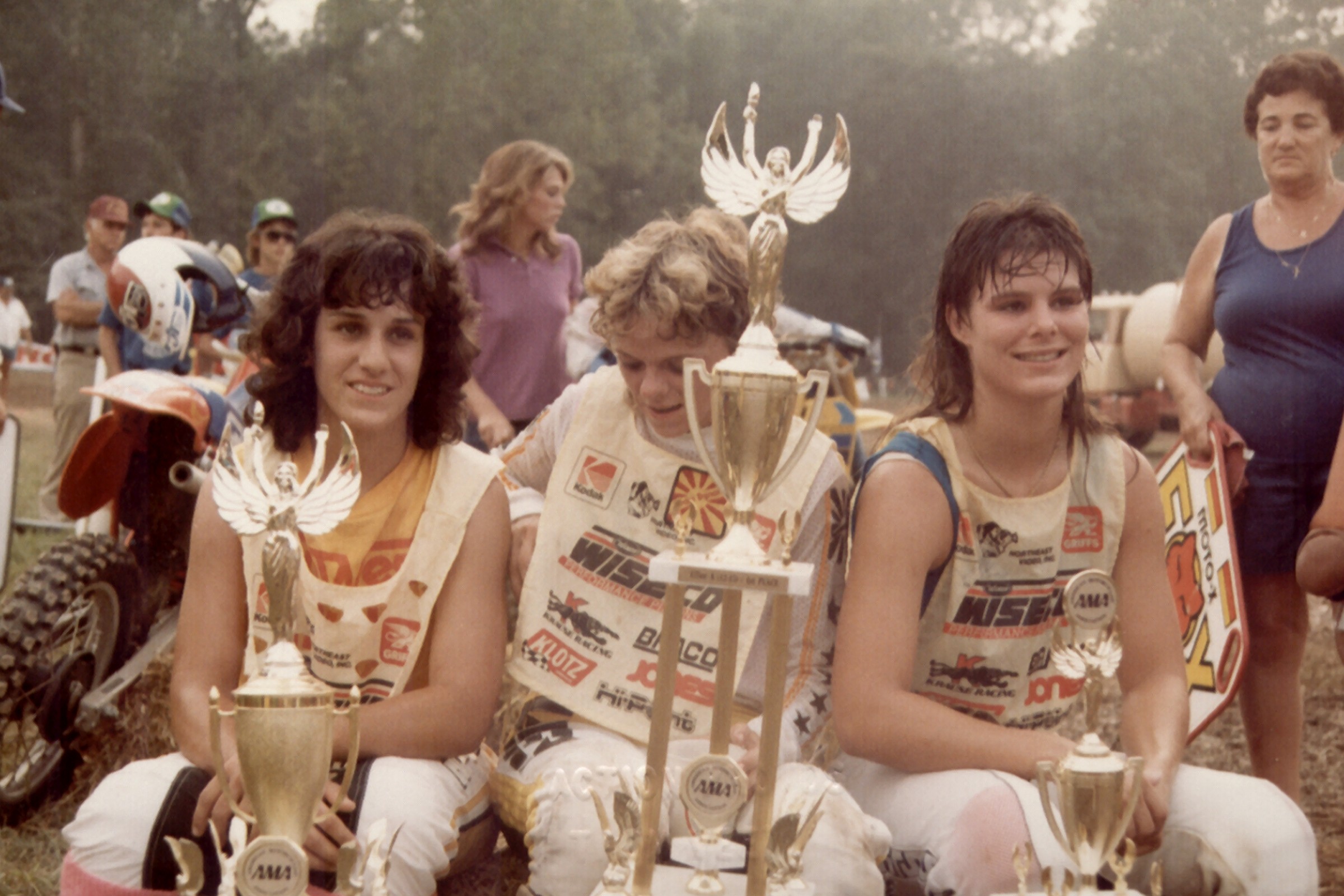 Where Are Mercedes Gonzalez

Mercedes Gonzalez is remembered as perhaps one of the fastest women to have slung a leg over a dirt bike. Growing up in Southern California, Gonzalez worked her way through the ranks by racing the men’s division, as well as specialized women’s classes, where she dominated on her Team Green-backed Kawasaki. With nine national championships, and five Loretta Lynn's championships, she is one of the most decorated women in professional motocross.

Gonzalez also happens to be married to another fast rider, Derek Natvig, who we profiled in this very same column just a few weeks ago. Gonzalez and Natvig are the only married couple (that we know of) that have both won championships at Loretta Lynn’s. And they share the distinction of being what is perhaps America’s fastest motocross couple, though Andrew and Jacki Short might be a close second.

Racer X: Mercedes, thanks for taking the time to chat with us. When I spoke with your husband a few weeks ago, I thought it would be fun to do these interviews back to back. What do you have going on in your life these days?
Mercedes Gonzalez: Well, I am pretty much a full-time mom. My son is 15 years old and my daughter is 13. They are the priority right now! But I am still very involved in motorcycling, as I work at the Honda Rider Education Center in Colton, California. My responsibilities there are organizing and running the staff schedules and programs. Between my family and that, I have my hands full.

Tell me about the Honda Rider Education Center?
Well, basically we provide basic and entry level training for powersports. That includes dirt bikes, ATVs, or side by sides. We are open to the public and have regularly scheduled classes as well as private events and even family classes. Most of the programs cater to people who have never ridden before and need to learn the basics. I also am in charge of the Honda associate product training, which is basically open to the company employees. We also do a kids demo program at some of the supercross events as well. That is a mobile program, meaning we bring our program to the stadium along with bikes, gear, and coaches. It is supposed to be a part-time job, but I'm quite busy.

I think that is really cool that Honda gives back to the sport and encourages new people to learn in a safe and friendly space. Right now, the entire motorcycle industry really needs to come together and collectively push on attracting new riders into the sport.
Yes, Honda is one of the only OEMs that has a fully staffed and dedicated safety training center for all the segments, including street, dirt, kids, ATV, and side by side. They actually have four facilities throughout the country. The main one is where I am based in Colton, but we also have places in Irving, Texas, Georgia, and Ohio. The other three facilities are run by the MSF (Motorcycle Safety Foundation), but are still Honda supported. Our dirt bike riding school, it offers a great way to try the sport out. People can show up with nothing, we outfit them head to toe with Troy Lee Designs gear and Alpinestars boots, and we put them on the latest models of Honda dirt bikes. A fully staffed class will have seven to eight coaches and follow a MSF curriculum. I think it is just an awesome program, as it takes out the fear and intimidation that some folks might feel about riding. We break things out by age groups when we need to, and we also do family classes and private classes. The youngest we start at is six years old. Some of the most fun classes are the family classes; you can sometimes get three generations all learning to ride at once. You have the kids, parents, and grandkids, and they are all just having fun. It gets people engaged. Most people get totally hooked, but sometimes we have someone who might decide riding is not for them.

So the facility was built from the ground up and designed for motorcycle training?
That’s right. Honda felt it was important to build a center that focuses on just safety and training. That is the biggest thing for us. The facility was built in the 1980s or so. Besides the dirt bikes, we do training for street bikes as well, and people can come in and get the motorcycle endorsement for their drivers license. Honda’s main mission is to promote safety. It does not matter if the person doesn't ride or buy a Honda, we are teaching to minimize risk. We run about 500 people a year through dirt bike classes, and that’s quite a few when you realize that the classes are held on the weekends.

Does the center do any active promotions to attract new riders?
Yes, we do. This weekend we are doing the demo program for the little kids at Angel Stadium, and in conjunction with supercross. We also do some Monster Jam events as well. On the outside events, we will run about 100 kids through the program. We also do some social media offerings via Groupon. Through those offers, we get some really interesting clientele. Most of those people have never been to a supercross and don’t know anything about the sport; they just think it would be cool to learn to ride.

So are you doing much teaching yourself, or just working behind the scenes?
Not as much as I would like, but still doing some. For me, I love the transformation that you see in a person in just one day; it's very rewarding. You know, that person that is so scared at first that they are maybe shaking, but working with them one on one and getting them up to ride, that feeling is great. I love empowering people and encouraging them, they can do anything if you let that fear subside and have faith in the instructor. You know, I won all these championships and whatnot, but they weren't as rewarding as teaching, say that little girl who crashed a 110 and was crying and wanted to go home. But I worked with her and by the end of the day, she was riding, shifting, just having a blast.

How did you land this gig?
I was a Team Green rider my whole career and after I was done racing, Kawasaki wanted to hire me to do some PR stuff, and I had to take an MSF coaching class for that. At that time, I was doing motocross schools with Rick Johnson, and I took the course and couldn't believe the facility. I told the guys at Kawi that they needed to build a place like that. Then a year or went by, and Kawasaki didn’t really use my services that much. Lowell Christiansen, who is the manager of the facility, called and asked me to come out. So after I retired from racing, I did the MX schools with RJ from 2000 to 2005, and then around 2005 I moved to the Honda program and have been here almost 10 years.

Switching gears, and looking back, what are some of your proudest accomplishments from your racing days?
Well, I like to think that I raised the level of awareness and competition for women’s racing during that era. For me, I raced against the guys; I had a lot of respect from them back then. And it was guys like Brian Deegan, Phil Lawrence, [Jeremy] McGrath, Mike LaRocco—I raced all those guys when they were still doing the amateur scene. I was in the same classes and it elevated my riding and racing. So doing that in turn let me dominate the girl’s class. I did that for seven to eight years and pretty much won all there was to win. Some of my best memories are racing with Lisa Aiken Wagner, she was my main rival and also a very good friend.

Were you able to make any money as a professional?
Not much, maybe a little here and there. I was fortunate enough to get paid to travel and do some overseas races. The international promoters would hire me to race in Central America, South America, and New Zealand. I guess the girl versus guys was a good selling point! But here stateside, I got free bikes and gear and had sponsors and made some bonuses from Team Green and Scott goggles when I won.

I understand you moved onto car and downhill mountain bike racing?
I guess after racing and winning for eight years, I felt that I either needed to compete against guys on the pro level, or just move on. To compete against guys at the pro level would have been too hard, and if I had the success I was capable of, maybe I could have qualified for an outdoor national. But I was also working a full-time job, and just making the top 40, well, that didn’t have a big appeal. So I decided to leave my legacy as it was. So around that same time, I moved over and was racing the Mickey Thompson off-road series. I had an offer for a ride in the superlight cars, so when that happened, that was the catalyst. I moved over to that and did that for five years. Then one day I did a mountain bike race, and I ended up winning the Women’s Expert class, and I had a speed that was top-10 in the Women’s Pro class. So I started racing downhill mountain bikes and did that for about five years. I was usually on the podium in those events. I finished fifth overall in the World Cup Downhill, but then I decided to quit in 1999. I was 36, and most of my competitors were in their early 20s or late teens. That was 1999, and it was time to settle and have some kids.

That is quite the career. You were a professional athlete in three sports.
At the time, it didn’t seem like things were going fast. I raced motocross from when I was seven to 24, then I moved to car racing. I then jumped into mountain bike racing when I was 30. Most competitors were 17-18, but I could hang with them, though.

I understand you got a win at one of the Mickey Thompson events?
I did. I won the last event they had. It was at Mile High Stadium, and shortly after he and his wife were murdered. A funny side note is that my teammate was Jimmy Johnson, the NASCAR champion. He was younger then me, he called me Mama Mer. I was always telling him to behave and trying to look after him. I knew him from racing motocross, as he was from El Cajon and had raced at Loretta’s and done all that. It’s been fun following his career.

Thanks for chatting with us. Any closing words of wisdom?
Well, I feel totally lucky to be introduced to the sport, my dad rode—I was passionate about it. But at the time, women’s racing wasn't a big deal, but because I stuck with it and enjoyed it and did everything I did, it turned into a life long career. I did some other sports, and now I can give back by working and teaching people how to ride. I think it was amazing I could make a career out of it, and hopefully inspire some women to race to chase their dreams. It was a good deal, didn’t make much money, but didn’t spend much either, so it was awesome.