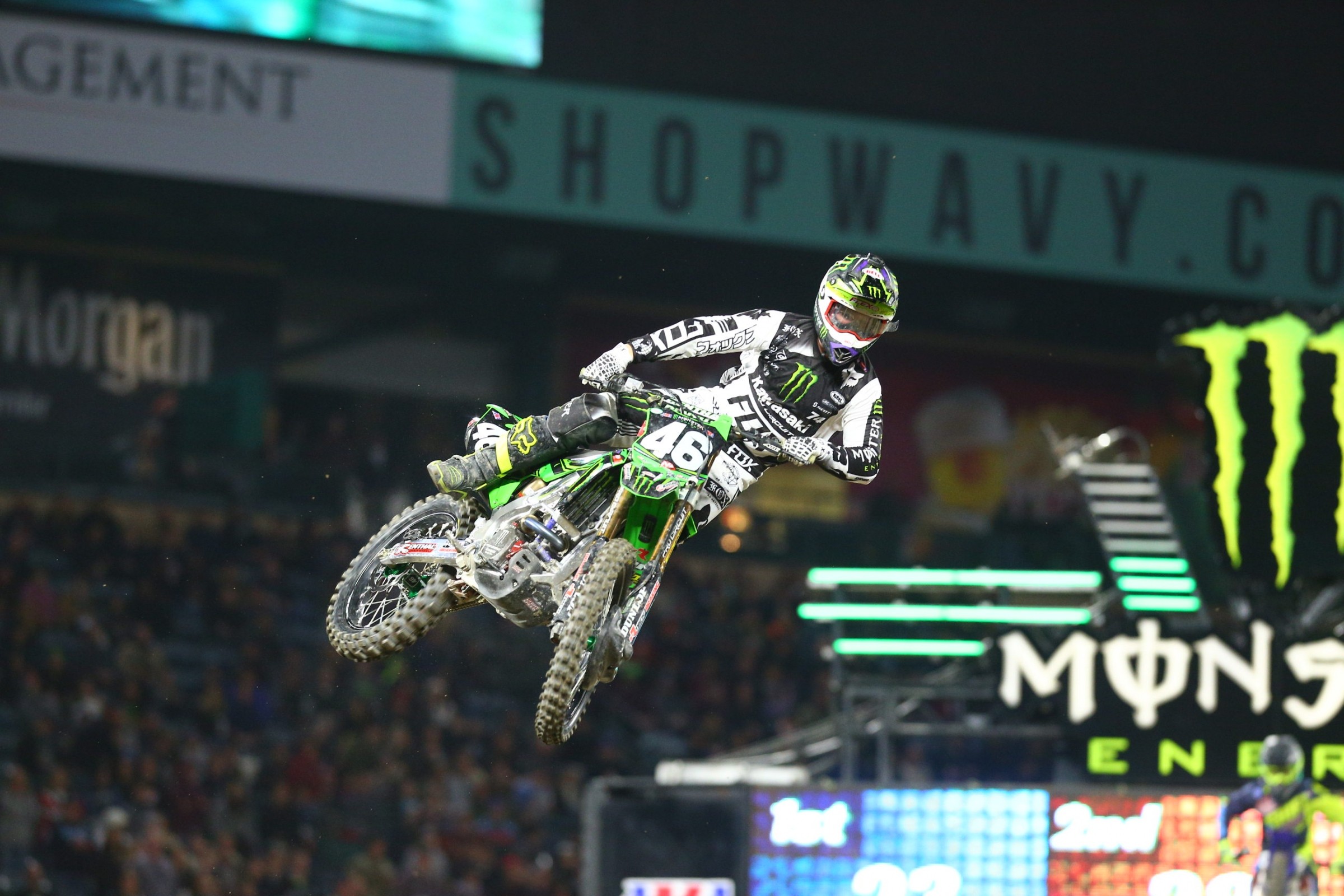 And it was over just like that. Ken Roczen’s superb start to the season ended with one huge get off in the third race of the season, bringing not only the realization that Kenny’s win streak, title hopes and arm had been snapped, but that Monster Energy Supercross remains Ryan Dungey’s world. With 2-2-1 finishes thus far this season, Dungey is doing Dungey. Not only is the Red Bull KTM man back into the points lead, but it’s a big gap already—seven points back to his teammate Marvin Musquin, 18 back to Roczen and Cole Seely who are tied for third and fourth.

It seemed like it would be the opposite for much of the day at Anaheim. Dungey struggled in practice, and then his heat race was a disaster, as a first-turn crash resulted in a broken throttle that sent him back to the pits. He gated terribly in his semi and didn’t ride that well, only taking third to get the 13th gate pick for the main event. Dungey admitted that some bike changes had not worked, so he and the team went all the way back to where they started the day. That not only made the bike work better, but also hook up better, and lo and behold Dungey got a great jump and turned the 13th gate pick into the early lead in the main event.

“Tonight was testing for me—first the throttle broke in the heat race and then my start in the semi wasn’t too great but we were able to end the night on a good note,” said Dungey. “The main event was tricky, the track was nasty but I’m surprised with the rain that it was as good as it was. There were a bunch of kickers so I was just focused on hitting my lines and marks. Overall, with all the adversity we faced I’m glad we could come away with the win tonight—it was a hard-earned one!”

Dungey showed considerable sympathy for Roczen after the race. All of the riders did, as the track was tricky and they knew a big crash could have come at any time.

For awhile, second Seely and third place Roczen, gave chase and matched or at times exceeded Dungey’s pace. Dungey seemed to settle in though, and the gap started to stabilize. Then Roczen crashed out from third, and there it went.

What happened? The Anaheim track had soft dirt in the transitions between jumps, due to rain earlier in the week. Kenny either crossrutted, his bike bottomed out in the ruts, or he hit a square edge in the bottom. That bucked him forward, then he tossed the bike away in the air and landed face and arm first into the next jump with a frightening impact. It was a huge hit. Honda reported that he has a fractured left arm but listed no other injuries.

It took several laps to get Roczen off the track, and the resulting red cross flag situation forced the riders to not clear jumps through the section. Some riders were knocked off of their rhythm through there, including Seely and Josh Grant, who also started well. Seely succumbed to Marvin Musquin to drop to third, but he held it all the way to the end. Seely says he’s getting less nervous and more comfortable each week.

Musquin rode well again for his third podium in three races. He, like all the riders, remarked that the track was tricky due to the numerous soft spots, and Dungey said he backed it down at the end. Musquin wasn’t giving up and got close to his teammate Dungey at the end, although Dungey was cruising the last lap.

“All I can say is ‘you gotta do what you gotta do.’ Both of us went to the semi-final but still qualified to the Main Event and proved we can still be on the podium after going to the semi,” said Musquin. “Once again at the beginning I wasn’t as good as the end but I tried to stay calm and keep up with those guys. Roczen got around me and had a big crash so after that I tried to switch up my line to stay smooth. I wasn’t too far from Ryan but he was already gone at the beginning so second place wasn’t too bad for me and a really good night for Red Bull KTM.”

He didn’t make the podium, but Cooper rode much, much better in his third-ever 450SX main than last week, where he was lapped. This time he was fourth. Last week he was 14th! Cooper grabbed the main event holeshot on his Monster Energy Yamaha, but Dungey snuck underneath. Webb was passed by Seely, Musquin and Roczen, but overall was much more competitive, starting in practice, where he bounced around the top three in times for most of the day. “Just not being myself on race day was frustrating,” he said. “I felt really good for the first few laps of this main, then I kind of tightened up and didn’t quite ride like myself. But like I said, there are flashes, and it gave me the hope that I don’t totally suck! [laughs]”

Weston Peick is a damned beast. In this stacked field, the Autotrader.com/JGR Suzuki rider keeps racking up strong results, with a fifth tonight. He didn’t think the track was good for him, either. “It was one of the most difficult races I’ve raced professionally, just with the track conditions and how tight the track was,” he said. “I rode a little tight and got some arm pump. But the team made good changes.”

Grant started well on his Monster Energy Kawasaki, but admitted he hadn’t started up front in awhile and forgot what that felt like. He was somewhat happy with sixth, but also disappointed he didn’t get more.

Chad Reed rode a decent race on his Monster Energy Yamaha, but once again found himself trying to reel in or pass Peick for the third time in three weeks. Then Eli Tomac rolled up on Reed after a bad start, made a pass, and then his second-half-of-the-race funk kicked in again, and Tomac started losing time. Reed repassed Tomac and pulled away, taking seventh behind Grant. Tomac was eighth and has to be incredibly disappointed with his early showings in 2017.

There was other big news in the 450s at Anaheim, involving a rider getting pissed when Vince Friese bumped him from the inside in a turn and knocked him down. That rider got so mad that he swung at Vince and was disqualified. Sound familiar? This time it was Jason Anderson who got the brunt of it. In a heat race, Anderson turned down just as Friese braked his SmarTop Motoconcepts machine on the inside, Anderson fell and collected his buddy Musquin with him, sending both to the Semis. But Anderson was pissed and tried to throw a punch at Friese while riding up the tunnel. Friese’s mechanic shoved Anderson as the punch was being thrown, and Anderson crashed. Then Anderson was DQed for the night for throwing the punch at Friese. Along with Roczen, Anderson makes for two big title contenders taking massive hits in points.

The 250 class also saw a two-race streak snapped, as Justin Hill was fast all day again and captured his first win of the season on his Monster Energy/Pro Circuit Kawasaki. Hill pulled one amazing move. He started third, and calmly went to the inside of Aaron Plessinger and Austin Forkner to take the lead. In one turn! From there Hill took off for the win.

Plessinger got a good start in his heat and the main, and that actually surprised him a bit. He says he needs to work on sprints and intensity though, because he wasn’t ready to go early like Hill was. It was a similar situation for Forkner. He grabbed the holeshot but Hill and Plessinger got right around him, then he almost crashed in the whoops, and McElrath went by. Forkner said it was tough leading on lap one for the first time. Once he settled into fourth he matched McElrath for most of the race. McElrath’s quiet third still keeps him atop the 250SX standings.

Another forgettable night for GEICO Honda’s Jeremy Martin. He was fastest in qualifying but crashed in the first turn of the main, finding himself basically last for the second week in a row. He fought back for 10th.