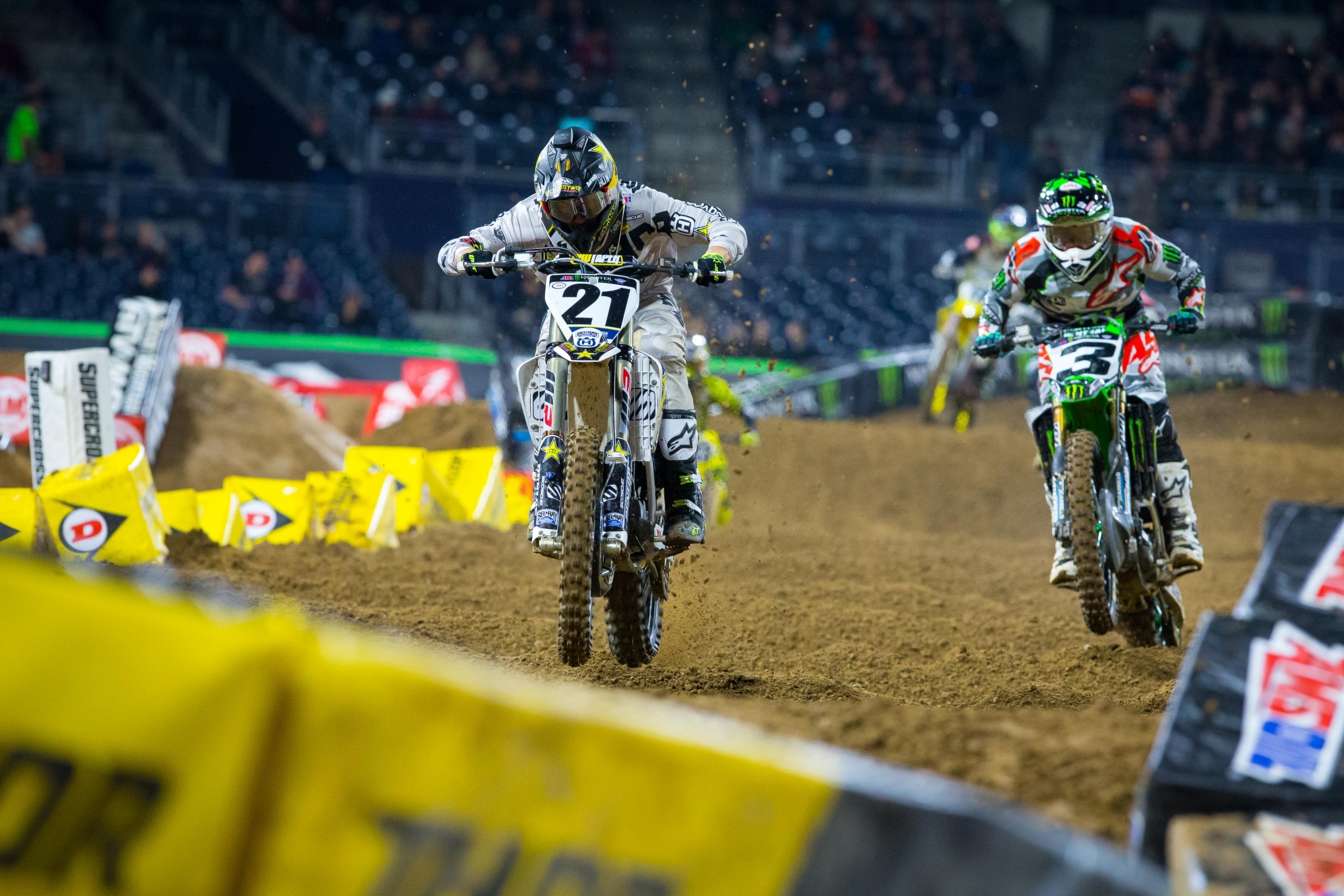 #Deepfield is a theme at the start of every year, but most seasons typically break down to just one or two riders that take the majority of the wins. In the early going of 2017, Ken Roczen and Ryan Dungey are threatening to do that, leaving Marvin Musquin (Red Bull KTM), Jason Anderson (Rockstar Energy Husqvarna), and Cole Seely (Honda HRC) in chase mode. Musquin, Anderson, and Seely finished third, fourth, and fifth in San Diego. They talked about what’s next in the post-race press conference.

Racer X: I see a change in you, Marvin. Another podium, third, but you’re not happy with that third.
Marvin Musquin: Well, especially after that first lap. I was really happy about my start and I was trying to be really aggressive and trying to pass Ryan [Dungey]. I went on the inside and doubled and it was not the rhythm that we were used to doing all the time. But I tried to jump on the next table. I don’t know what happened but I thought I was going to crash. Up in the air, all I could see is the sky! I was like, “Oh my gosh, what’s going on?” I thought I was going to die, and then everybody was coming behind! So I don’t know how I didn’t crash. I went off the track and rode over the big puddle. I jumped back on the track. I was like, “Man, what are you doing?” But I’m really glad to be here right now. It was a good race. I was trying to ride really hard and try to keep up the pace with those guys. At the end they were going really fast. I couldn’t do more. I tried to maybe save the third place. Nothing I could do against those guys, but third is really good.

Two podiums, two third places. What needs to happen for you to take that next step?
Musquin: I feel like I’m really happy because I’ve never really done really good on the West Coast tracks. Anaheim 1 and today, San Diego, I feel like the tracks were pretty rough, pretty choppy. I don’t think those tracks are really my type of tracks. I feel better when it’s more rutted and more softer, more like East Coast. So that’s why I’m really happy to be right here on the podium. We’ll keep working and obviously try to not make a mistake like I did on the first lap and try to be right there like I did tonight. Just to be better. It’s hard to say what I need to do better but we’ll keep working.

Jason, what happened in that start in the main? It seemed like both races you had to come from the back to work up to finishing in that fourth position?
Jason Anderson: For sure. I definitely have heard how crappy my starts have been lately a lot, but it’s all good. I’ve just got to get it together. I got a holeshot in that heat race and was able to win that, but in the main I actually was pretty good. I just had Davi [Millsaps] on the inside of me he was a little bit ahead of me and I had to chop the brakes. Once you’re mid-pack it’s wild back there. I saw my training teammate, Marvin, almost Larry Loop-out out there in front of me, but I made it through the first lap and was able to make it through the pack. But I really need to get it together and get out front so I can battle with those guys. We’re getting smoked right now.

Cole, you finished up sixth in the opener, a fifth now tonight. You seem to be moving up a little bit, but also you had to come through that semi to get into that main event which puts you in a bad gate pick starting off.
Cole Seely: Yeah. I’m just kind of finding my groove with my starts right now. Got off to a good start in the semi and then a good one in the main too, so I might have found something there. But it’s always a bummer having to go through the semi, but then again you get to kind of stay warm and learn how the track’s developing so it’s not that bad.

This is for both Jason and Cole. Do you feel that those other two (Ryan Dungey, Ken Roczen) have raised the bar this year?
Seely: Yeah. I think Kenny and Ryan are always going to be raising the bar. They work hard, but so do we. We’ve had a long history of having some good battles and all that kind of stuff. Unfortunately tonight it was for like fourth and fifth, but we’ll get there. I think it’s a step in the right direction, at least for me tonight. It’s really just finding my groove. I hadn’t raced everybody, other than Monster Cup, since June with my hand injury. So I’m still a bit nervous, still getting some knots in my stomach, but we’re getting better.

Anderson: Yeah, definitely Kenny and Ryan are smoking us at the moment but I feel like for all of us once we get through the pack and we make it up to those guys we’re not really able to catch them. It’s not like we’re getting … as far as like Marvin, me and him, once I get into fourth or whatever, between me and him it’s tenths that we’re catching each other. But I know how hard Marv works and I know the motos we do at the track and it’s the same exact thing. So to actually feel like you’re going to make up time on him and catch him, it’s impossible. They’re definitely riding way too good right now. But I definitely think we have it in us to get a start. Once we see the pace, for sure. I have my goals set on winning some races. I think it’s possible next weekend. I just need to be up there and see the pace. I know I’ve got it in me. Just need to pull it together.

Jason, last week Roczen won by 16 seconds and then you and your training partners were behind him, second, third, fourth. Did you adjust things based on what he did or did you just all three work on what you thought you needed to work on for yourself, and did you not even think about him?
Anderson: [Laughs] Did you see the weather this week? We did a few mud motos. We were surprisingly able to do a little bit of riding this week at our test track, but it was kind of hard to change anything. We were just lucky to be able to ride. Other than that there wasn’t much we could change. We were just like, if we had a window of an hour to ride, that’s what we were doing. Then the rest of the time we’d either be riding the spinner inside, doing our little workouts or whatever. So this week’s kind of been tough. I feel like next week we’ll be able to do some things and some more testing and stuff like that. It’s only round two, but at the same time I don’t want to see those guys pulling away as easy as they are right now. We definitely need to figure it out and problem-solve.