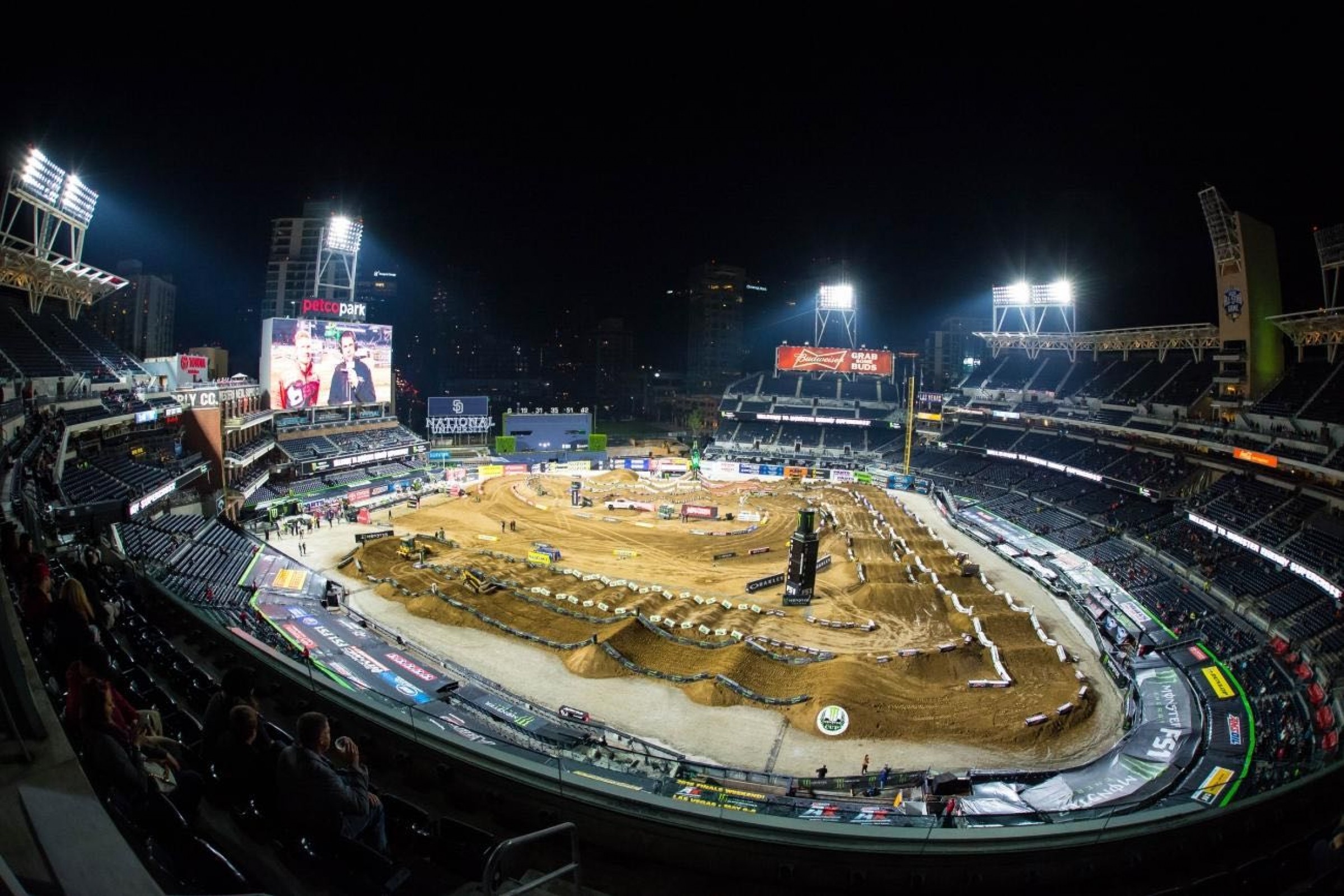 San Diego! Round two takes the series 90-miles south into what Ron Burgundy once called “the greatest city in the history of mankind.” I am not sure if that’s true (I missed my window on Atlantis and Pompeii), but it is a great venue for supercross. This is the third year the race will be hosted inside Petco Park which was a pretty significant change from longtime supercross home of Qualcomm Stadium. The downtown location definitely has a different feel than Qualcomm did. Yes, the parking is a nightmare and it’s a haul from the stadium to the pits but every other aspect is a plus in my book. The stadium is a massive upgrade and I feel that supercross has been ushered into the modern era with the move downtown.

The track for San Diego is typically a bit shorter. The baseball field layout will yield a lower lap time more times than not and in years past this was a bummer for main event length. Not anymore! Timed main events will guarantee plenty of racing this year. One negative aspect that may come into play is track deterioration due to more laps. We will have to watch and see on that, but it’s certainly a factor.

The start is similar to what we saw at A1. I like this style and as we saw last week, there are few first turn crashes in this variation. There are two rhythm sections back to back off the start and I look for these to be fairly basic. The top riders are all so talented that they usually figure out the fastest line within a few laps and stick to it the rest of the day and night. Next, there is a long right hand turn that wraps around the leaderboard tower. I think this turn might give riders a chance to go big in the next rhythm. They will be able to triple in and then go even bigger if possible. Watch for some cool possibilities there. The following straight is a double jump and then a whoop section. Depending on how big Dirt Wurx wants to build these, they could be nasty. The San Diego whoops in 2012 still stand out as some of the toughest on record. It really all depends on how deep they want to drop the blade.

The next straight-away is all rhythm down the length of the stadium. I anticipate several triple jumps here. Most likely, riders will go 3-3-3-2 in this section. I am basing that purely on what I have seen over the years of reading track maps. Let’s see if I’m right, shall we?

The rest of the track is fairly simple. There is a standard supercross triple out of the next 90 degree turn and then the track crosses over the start twice before an easy finish line jump. With the shorter layout, fast rhythms, and the amount of open space, I expect lap times to be in the low to mid 40s. Look for a 25-lap main event on a beat up track.

Ken Roczen is simmering, folks. He was dominant last Saturday in Anaheim. His only misstep was dropping down a few spots in the final timed qualifying session. But as he’s said many times, he doesn’t care about timed qualifying. It was a sensational night for the young German.

Shane McElrath made a statement. He waited on Jeremy Martin in the heat and then blew by him like an alarm went off. His main event was wire-to-wire and he never really felt any pressure. Strong, strong ride from Shane.

Aaron Plessinger may not have won the race but he was still very impressive. He was the only one who seemed to have anything for McElrath, even closing on him at times. He will win races and is still my pick for the championship.

Team Aldon (Ryan Dungey, Marvin Musquin, Jason Anderson) went 2-3-4 in the main event. Yes, they got beat soundly by Kenny. No arguing or doubting that, but they are definitely going to be in this fight. They looked fast, fit, and will be looking to bridge the gap to Kenny.

Feld was on fire this weekend as the Anaheim event was a complete sell-out. The Anaheims haven’t been drawing great numbers in recent years, so it was awesome to see fans turn out en masse.

Chad Reed tried to get forceful with a stubborn Weston Peick in the main event and it cost him. His engine cases said “no mas”, causing a DNF and a frustrating start to 2017.

Christophe Pourcel failed to qualify and for a rider of his talent and ability, that’s a tough pill to swallow. He couldn’t get up front on any of the starts, and on a track tough to pass it was too much to overcome.

Trey Canard had a big get off on the second lap of practice and is now dealing with a shoulder injury. He didn’t race the main event and will miss San Diego. Tough break for a rider whose had more than his share of tough breaks.

Can Cooper Webb bounce back or is this going to take some time to figure out?

Can anyone slow down KRoc?

Will Eli’s arm pump make the drive down I-5?

Was that the ice-breaker for Shane McElrath?

Will Kenny drop an F bomb on his butt patch?

Phil Nicoletti has a fantastic day. He doesn’t crash, doesn’t frown, doesn’t get depressed, doesn’t get called a squirrel by Scott Champion, and agrees with Steve Matthes on all topics. Now that’s a bold prediction.

Kenny arrives to the race via helicopter, wearing a tuxedo, and has also grown one of those mustaches that curl on the end into neat little circles.

Martin Davalos gets another podium and tells Matthes to “suck it.”