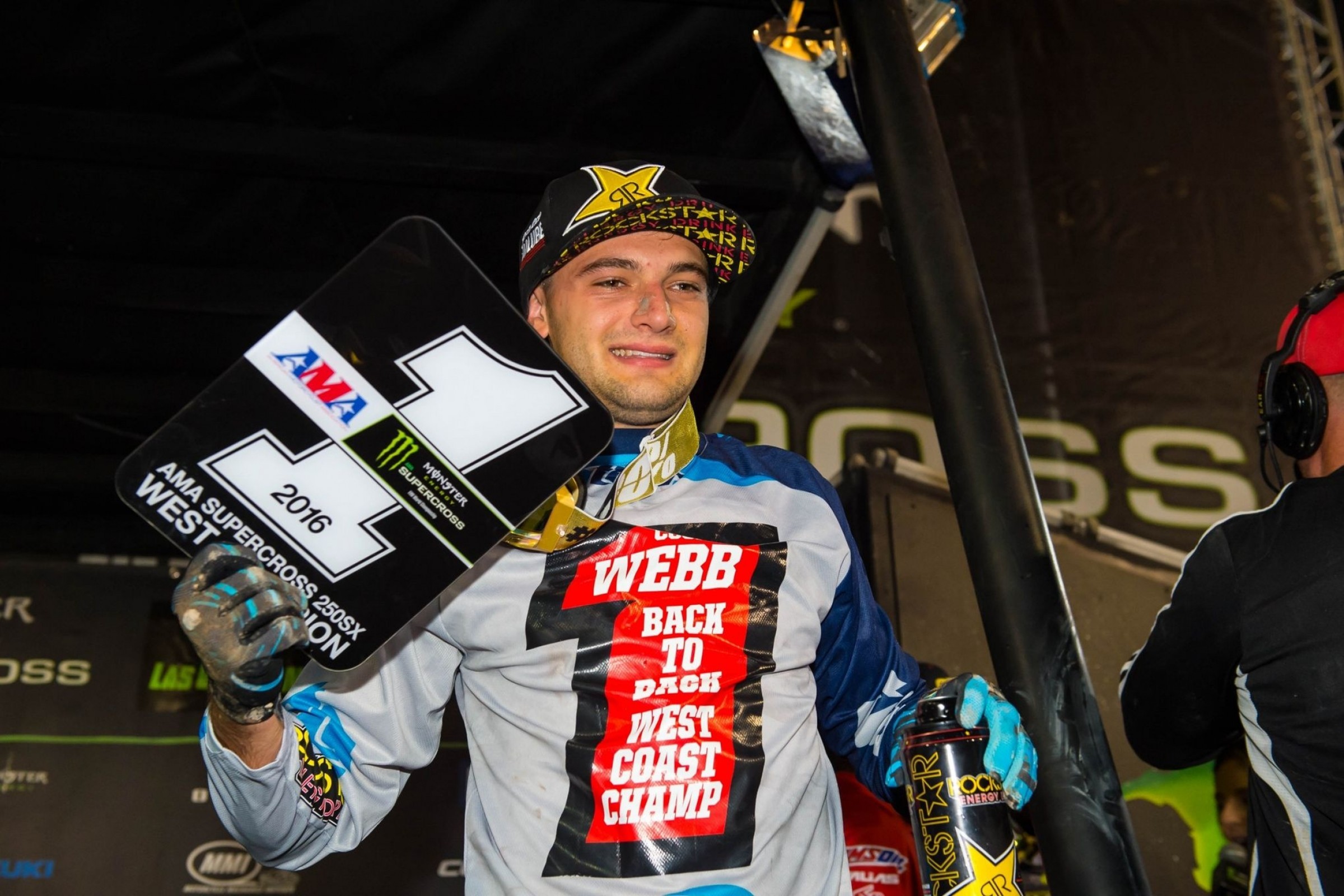 Racing is everything. It requires something from both the head and the heart, and that’s why we can’t pull away. There’s always more to think about, and more to experience. So while championships are won not through one spectacular moment, but rather a steady application of force, we can both appreciate the consistency and also the highlight the spectacular by looking back at 2016. If you want to archive the season and remember how it was run, and won, this is your story.

Any Anaheim 1 win is big. You can rattle off every Anaheim 1 winner of the last dozen or so years right now, but you couldn’t do that for any other race without an internet cheat sheet. This one was exceptionally crazy due to a red flag after a big collision between Ryan Dungey and James Stewart. You literally could not script a wilder ending to Stewart’s return to racing. Then Anderson took his first-ever win and made some passes to do it. You’ll be talking about it 12 years from now.

By round two, Ryan Dungey had another win and his points lead back. Chad Reed gave Dungey a good run and that was fun, but bottom line, Dungey looked like an immovable object. Plus, Cooper Webb turned two bad starts into two 250SX West Region victories. Talk of perfect season was already starting.

Took Christian Craig a few races to get his SX legs back under him, but he was game for the challenge and at round 3 he and Webb swapped spots hard in a fight for the lead. It paved the way for much more drama in the West than expected.

In Oakland, Dungey tallied up a three-race win streak and a big early 450SX points lead. Webb was looking for a four-peat, until his bike quit while leading. Joey Savatgy busted through for his first career win, and first look at a points lead.

Then Craig took a win in Glendale, Arizona, and brought his son on the podium with him to explain why he came out of retirement. Well, to win, clearly!

The best drama seen in Dallas since Who Shot JR?, as Craig moved over in the whoops to try to block Savatgy, sending the Kawasaki man to the ground hard. Webb would slither past Craig to win and reclaim control of the series.

Oh, Marvin Musquin. The friendly Frenchman had it, holding his teammate and training partner Dungey behind him for 19 laps, until the last one, when he encountered a lapped James Stewart, cased a jump, and bounced his way out of the lead (the was it Stewart’s fault/was it not Stewart’s fault is just typical for a controversy involving JS7, by the way). Marvin took second, which actually stings more now, because he never ended up getting a win.

Headline says it all. At least there was something for Tomac and his new Monster Energy Kawasaki team to smile about in supercross.

Toronto’s 250SX East Region race was crazy, starting with Martin Davalos’ no-show due to VISA issues—while leading the points! Then came the first turn crash from hell, which shredded up contenders Jeremy Martin and Malcolm Stewart, as well as Stewart’s jersey. Martin came back to second, Malcolm came back to sixth, but both seemed to walk away more determined than before.

Justin Hill won that crazy one in Toronto and looked ready to fight for a title. Then he knocked himself out seven days later, and his SX season was done.

Detroit’s 450SX looked like another Dungey runaway, until the AMA and FIM docked him two positions after the race for jumping past a red cross flag, and handed the win to Anderson. First time we can ever remember a rider having a win taken away due to a penalty.

Best battle of the year in supercross, with Roczen and Dungey going back and forth the whole way. Kenny went fast but made some bobbles, and Dungey won in a thriller. More great races to come in ’17?

A Wrap and a Snap

Roczen rocked ‘em at the East Rutherford Supercross, but Dungey finished fourth to clinch his second-straight Monster Energy Supercross Championship. The fourth snapped Dungey’s record-length podium streak, courtesy of some determined laps by Cole Seely, who edged him for third. No matter, the Red Bull KTM pits seemed to have burnouts for days going in the pits.

Big in the Big Apple

Malcolm Stewart won the East Rutherford 250 main, which was very big and very clutch after a disappointing third the previous weekend in Foxboro, Massachusetts. Malcolm’s win pretty much let him cruise to the title in Vegas.

No Cruising in Vegas

Then there was Cooper Webb, now carrying a big points lead again but also a broken wrist. Then it rained in Las Vegas, something that has worse odds of happening than you winning money on the slots. Webb barely, barely, held on, finishing 11th, to notch the title by a point over Savatgy, who won the race.

Dungey and Roczen, by the way, bounced off of each other, and Dungey won.

It wasn’t quite Tomac-in-2015 level, but Ken Roczen’s rides at Hangtown were convincing. They set a tone that didn’t change much throughout the Lucas Oil Pro Motocross Championship.

Other Hangtown highlights included a Blake Baggett passing Eli Tomac for a first-moto podium, but he broke his collarbone in moto two. In the 250s, Savatgy didn’t just go 1-1, he somehow left the first race with a 15-point lead. But also … A-MART!!!!

Roczen was just as fast at Glen Helen but his air forks blew in moto one, opening the door for Dungey to win the moto and overall. Savatgy was just flat, and somehow coughed up that entire huge points lead with 9-7 scores.

Ryan Dungey is indeed human. He crashed at round three in Colorado, his neck hurt, and it was determined he had broken a vertebra. Dungey wins championships through consistent force but without huge moments. This time he dropped out of one in an instant.

The Yamalube/Star Racing Yamahas were incredible weapons outdoors, but they did cost both Jeremy and Alex Martin (A-MART!!!) huge at High Point. Alex’s motor blew up in moto one, Jeremy’s in moto two. Jeremy, the two-time and defending champion, was fighting an illness, but would still have left High Point as the series’ leader if his bike had held up.

With his wrist still healing, Cooper knew his first few nationals wouldn’t be his best, but it still didn’t stop him from leaving the races pissed off. Finally, he was right for Muddy Creek, and in the second moto he found his old stuff, deep down inside, by running Shane McElrath down for the moto win and overall.

Savatgy won the first moto at Muddy Creek, grabbing five moto wins in the first nine motos. Then he crashed in moto two. The next weekend at RedBud he suffered a real whopper, and that set his whole season back. Webb won again at RedBud, and Savatgy would struggle through the second half.

Tomac couldn’t solve Roczen until Southwick. After an amazing battle in both motos, Eli had his first outdoor win on a Kawasaki.

Jeremy Martin tried clawing back and even took the overall win at his home race at Millville. But in the first moto there, Webb passed both Martin brothers to take the first-moto win. J-Mart went to the wall to win moto two, and that left him feeling listless by the next weekend at Washougal.

All hell broke loose on the first lap of Washougal’s second moto. Savatgy made a daring pass on Webb, Webb responded either with a block pass or brake check (depends on your view) and a pileup began. The loser? Jeremy Martin, who got hit in the melee and broke some ribs, ending his season. The winner? Rookie Austin Forkner, who took the moto win, the first of his career.

Webb started the year with a broken wrist, he won the title before the season was even over. Roczen won with a race to spare, too, both locking the crowns at Budds Creek. Zach Osborne also got his long-overdue first career 250 overall win.

Andrew Short called it a career in 2016, with the Ironman National marking his last race. He went out the way he should, by grabbing one more holeshot in the final moto of his career.

One moves on, one moves up: Austin Forkner delivered his first career overall win at Ironman. Instead of starting with a flash, the kid steadily improved throughout the season, culminating with a round 12 win.

The record book says one championship point scored all season for Gared Steinke. He did it at High Point, in the 250 class, on a 125. He showed up to all the races, and every time he came out of a corner or went up a hill, the fans saluted the effort, and the sound.

Clash of the Titans

A week after the Nationals ended, a much-hyped Cooper Webb versus Jeffrey Herliings battle loomed at the Charlotte MXGP. They didn’t disappoint, battling in each moto. Herlings on the first, but Webb served up a race for the ages in moto two, coming from around last to catch Herlings (and a game Forkner) to get the overall.

Tomac raced both USGPs, at Charlotte and Glen Helen, and cleaned up all four MXGP class motos. Would have been nice to have him on Team USA at the Motocross of Nations, but his replacement was ready, until….

The Moment of Moments

After the championships are won (congrats also to MXGP Champions Herlings and Tim Gajser) the off-season headline races really do come down to moments. These are not championship slogs but rather one day wonders, and Team USA’s return to glory at the Motocross of Nations lasted for the shortest possible time—by our measure, about two seconds. That’s how long it took for Jason Anderson to go from winning moto two (and giving Team USA a massive points lead) to getting landed on over the finish line jump, and being knocked out of the race. Yes, the Yanks could have still won it if not for a late crash by Webb in moto three, but the Anderson wreck is what put that kind of pressure on Webb. Anderson’s moments of riches to rags has the be the moment of 2016.

This one changed in a moment, too. Roczen’s debut on a Honda was set to be a rocking one, as he blitzed everyone in the first race at the Monster Energy Cup, then led again in race two. Until he crashed it all away. Tomac won with 2-1-4 scores and grabbed a $100,000 bonus, also becoming the sixth winner in six MEC races. All you need to do it look back at the history of this race to see how it usually works: races can be won over the long haul, and lost in a moment.