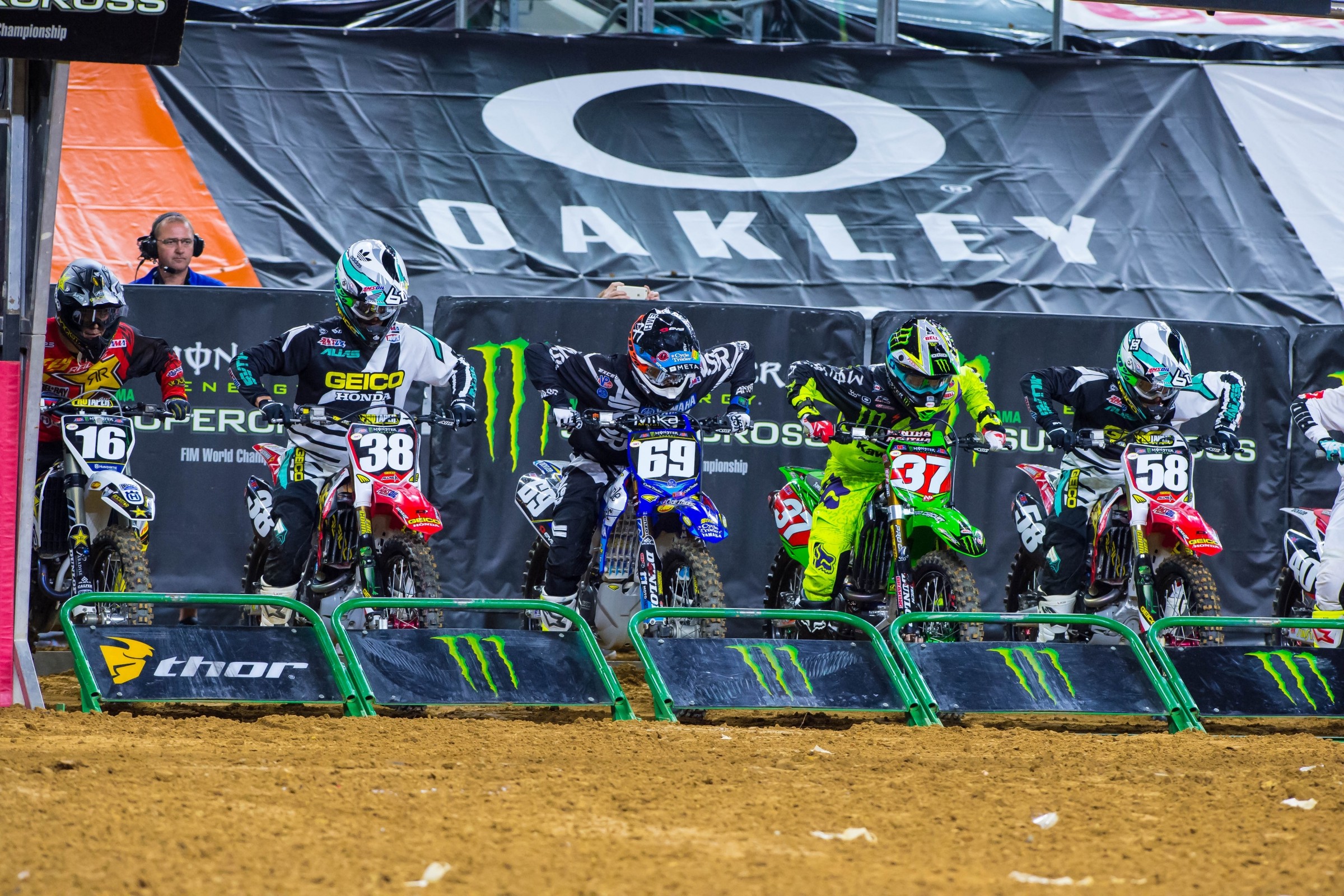 We’re a little over three weeks (!!!!!!) away from the start of the 2017 Monster Energy Supercross season. While we typically have to wait until the first practice of the season to figure out which 250 riders will race which coast, Steve Matthes did some digging and came up with a list that he says is “pretty accurate.” Obviously things could change, so don’t mortgage your house on the list. We’ve piggybacked off it, and added a bit more information about the rosters expected to fill out the 250 teams for the 2017 season.

Most teams have already announced their official rider list, so this guide should serve you well. There are a few I’s to dot and t’s to cross, but we’ll release another list closer to the season.

Notes: Joey Savatgy returns for a third year with the team. He is expected to race the East Region, which he also raced in 2015.

After missing the last two years of Monster Energy Supercross due to shoulder injuries, Adam Cianciarulo returns in 2017 and is expected to race the East Region.

After two years with KTM, Justin Hill is back under the Pro Circuit tent. He rode for the team in 2013 and 2014.

Austin Forkner is expected to make his pro supercross debut at Anaheim 1. He won the AMA 250 Motocross Rookie of the Year award in 2016.

Notes: After four years with Yamalube/Star Racing Yamaha, Jeremy Martin signed with GEICO Honda this off-season. It’s a two-year deal with an option to move to the 450 Class in 2018. If Martin races the West Region, as expected, it would be the first time in his career he’s raced on the West Coast.

RJ Hampshire signed an extension with the team this off-season. It will be the fourth year the former AMA Horizon Award winner has spent with the team.

Christian Craig is back for another year with GEICO Honda. Craig has never raced the East Region so we'll if the team sticks to that plan.

Jimmy Decotis returns to the team for the second-straight year. It’s an SX-only deal for the 2015 Australian SX2 Champion.

Chase Sexton was expected to turn pro after Loretta’s, but a knee injury pushed the 2016 AMA Horizon Award winner’s debut to supercross. He’s expected to race the East Region.

Notes: Kyle Chisholm will move back to the 250 Class for 2017 after signing a late deal with MotoConcepts. He last raced the class in 2008.

Iowa’s Cameron McAdoo, winner of the 2016 Amateur All-Stars race at the Monster Energy Cup, will make his debut at the East Region opener.

Note: The 450 AMA Motocross Rookie of the Year returns to Rocky Mountain ATV/MC-KTM-WPS to ride a 250 in supercross. He’ll transition back to the 450 Class for Lucas Oil Pro Motocross.

Notes: Alex Martin moves over to TLD/Red Bull KTM after a year with Yamalube/Star Racing Yamaha. Martin has previously never ridden a KTM in his professional career.

Mitchell Oldenburg and Shane McElrath both return to team. Next year will be McElrath’s fourth with the team.

GEICO Honda and Jordon Smith were expected to agree to an extension, but talks broke down late. Smith moves over to TLD KTM for his third professional season.

Smith was expected to line up in the West, but it appears he will move to the East, swapping coasts with Oldenburg.

Notes: Nothing changes for Rockstar Energy Husqvarna. Veterans Zach Osborne and Martin Davalos return for another season. Davalos is expected to ride the West Region, with Osborne in the East.

Notes: For the first time in the team’s history, JGR will house a 250 team, with Yoshimura assisting with a lot of the work. Like Kyle Chisholm, Phil Nicoletti will drop down to the 250 Class. He last raced the class in 2012. He’ll return to the 450 for Lucas Oil Pro Motocross.

Notes: Lots of changes for Yamalube/Star Racing Yamaha. Gone are Cooper Webb and both Alex and Jeremy Martin; in are Colt Nichols, Dylan Ferrandis, and Dan Reardon.

Aaron Plessinger, the 2015 AMA SX and MX Rookie of the Year, returns for a third year with the team. He’s expected to race the West Region.

Star was hoping Nichols could step into the hole left by the Martins and Webb, but he sustained a broken femur while testing in November. There is hope he can return for the East Region.

Mitchell Harrison returns for a second season with the team. He rode the West Region during his rookie campaign in 2016.

This was reported all the way back in May, but former FIM World Motocross Championship MX2 rider Dylan Ferrandis signed a two-year deal with the team and will make his supercross debut in 2017.

Reardon, the former GEICO Honda and MotoConcepts rider, raced in the U.S. from 2008-2011. The former Australian supercross and motocross champion is signed to an SX-only deal and is expected to race the West Region.

Scott Champion returns for a second year with the team.

Notes: Big changes from Traders Racing, as they switch from Kawasakis to Yamahas in 2017. They also added Luke Renzland (formerly of CycleTrader.com/Rock River Yamaha) to pair with the returning Nick Gaines.

Notes: Nothing official has been announced with the team, but it’s expected to name Tyler Bowers to the squad to pair with Hayden Mellross.

Mellross, who barely lost out on the Australian SX2 Championship, returns for his second season in Monster Energy Supercross. He spent last year with 51FIFTY.

[Update: Yamaha has officially announced that Bowers and Mellross will ride for the team.]

Notes: The team is expected to announce a 250SX East Region member in the coming weeks. Next year will be Catanzaro’s first with the team.

Notes: After filling in at Monster Energy/Pro Circuit Kawasaki in supercross in 2016, and riding for Traders Racing in Lucas Oil Pro Motocross, Audette returns to his same setup with the Legends and Heroes squad with help from Kissimmee Motorsports.

Notes: The French-based squad will contest the 250SX West Region before returning to Europe to race the EMX250 Class.

After parting ways with Ryan Surratt just a few weeks after announcing his signing, the team brought on Michigan native Marshal Weltin. But he will not be racing supercross in 2017, instead focusing on the EMX250 Championship.