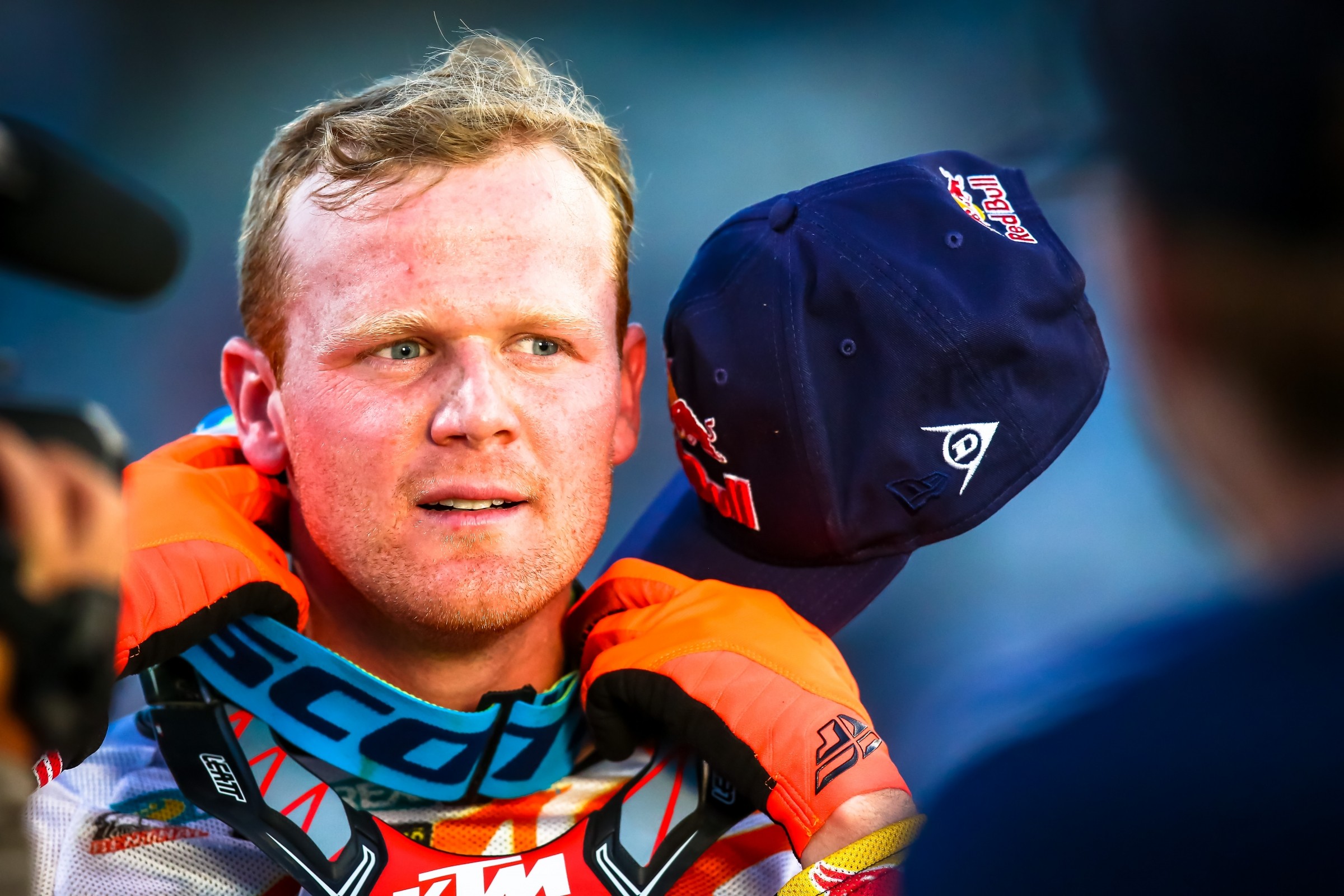 When you’ve ridden for one manufacturer for 10 years like Trey Canard has, signing with a new team means a whole lot more than getting used to a new bike. Switching teams means a whole new atmosphere in the pits and at the test track, it could mean a new mechanic, and a new support cast. For the first time in his career, Trey Canard is having to navigate his way through these challenges as he joins the Red Bull KTM team.

At the recent KTM media intro, we had the chance to talk with Canard about his transition, his off-season, and much more.

Racer X: How’s everything going?
Trey Canard: It’s been good. Just trying to get used to all the newness and having fun along the way. It’s been really good.

What’s the biggest differences between Honda versus KTM that you’ve had to adjust to?
It’s hard to really say. When I came to KTM I had about two-months off the bike, so it’s hard to really compare apples to apples. It was a little different. I think just for me I was with Honda for so long, now it’s just a whole new can of worms for me. It’s been a lot of fun. I’m really enjoying being around the whole KTM family. It’s been a good experience so far.

How long have you known about this whole process?
Early March I kind of knew things weren’t going to probably move forward with Honda as far as being a racer. It was a bit of an option to do some testing, but not sure I really wanted to do that. So I started to look around and talked to Ian [Harrison]. I was kind of hoping to go that way. The bike has been really good to watch. So I’ve known about it since probably late March. Late April was hoping for it and then May was whenever we agreed.

So we saw you debut at Straight Rhythm. How far at that point were you then?
Not very far along. I’d only had a few weeks with the bike and then just a couple weeks of supercross. So I was pretty fresh for sure.

How far have you come since then?
It’s been good. Since then it’s been kind of the normal procedure. Just getting used to the bike and trying to get my fitness up and trying to make improvements to the riding. All in all it’s been really good.

We’ve heard you’re selling your home in Oklahoma? What’s the status of that?
We’re trying to close right now. The sooner the better probably for me. But it was a really great place. We enjoyed it.

So what’s your plan now?
Not real sure, to be honest. I’m going to Timmy Ferry’s for the month of December and then I’ll be back here [California] for a lot of January and February. I guess we’ll go from there.

So no Aldon Baker program?
No. They’ve got their guys and I’ve got my program. I’ll just continue to do what I do and hopefully can intermesh a little bit and have fun riding together and that type of thing, but I’ll be working with Tim Ferry and Jade [Dungey]. It’s kind of standard.

Brent, he’s your old mechanic, this is the first time you guys aren’t going to be working together, right?
He’s worked with me since I was 13. It’s definitely a different feel for both of us. But I think he’s got a really good thing now and he’s really kind of excelling in what he’s doing. Working with Jade has been awesome. He’s done an unbelievable job and I decided to continue working with him.

Just for those who don’t know, what role did he take?
Brent is the team manager for the Troy Lee Designs amateur team. That’s where he’s at now.

Other than obviously moving to Timmy’s and everything, are there any other big changes that you’ve made?
Not really. This was the huge part. I’m very excited to be a part of the whole crew.

You won two races in 2015. What do you think was the difference in 2016?
Several things. There was a lot behind the scenes that not many people know about. Just a year of struggle for me. A lot of little stupid injuries. Just kind of run my course with what I was doing. So now to have kind of a clean slate is a really fresh thing.