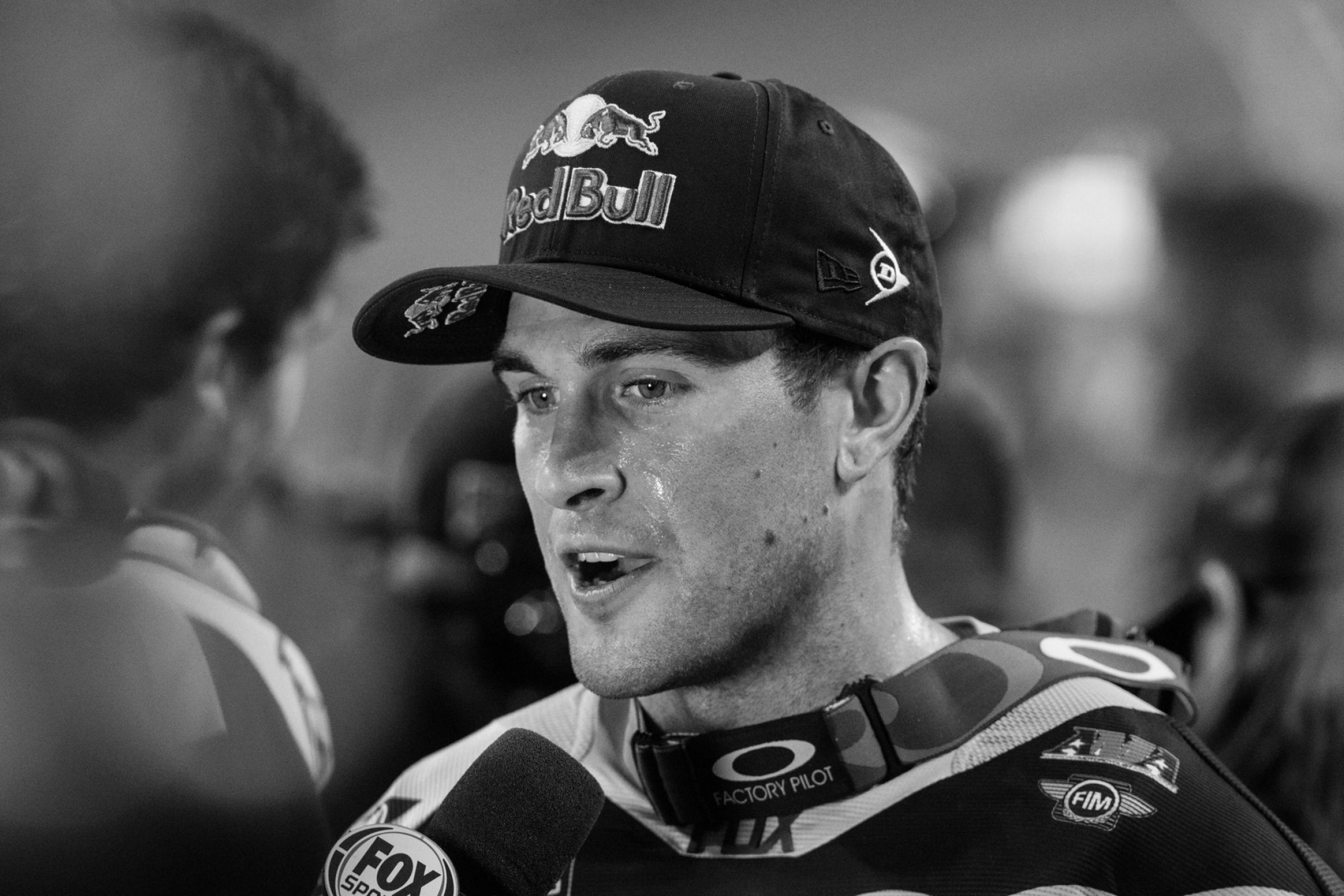 Red Bull KTM’s Ryan Dungey has a chance to join a short list of riders to capture three-straight premiere-class titles in Monster Energy Supercross when the 2017 season begins on January 7, in Anaheim, California. We had the chance to sit down with the recently turned 27-year-old at the team’s intro in Southern California, and talk about his off-season schedule, his injury sustained during the Lucas Oil Pro Motocross Championship, and more.

Racer X: What’s your schedule been like since Monster Cup and Straight Rhythm?
Ryan Dungey: We actually got a week off there. Went back home for one week, spent some time with the family, everybody was there. From there I went to Florida. Basically November 1 was the start of our boot camp. Just kind of started to ramp it up. Start getting ready for the new season and physically building. The KTM boys came to Florida last week. So that was good. We were able to do a little test with them and make some improvements there. Now we’re out here this week in California doing some photo shoot stuff, a little bit of testing and riding. Getting all of our team photo stuff done before the season.

Are you spending much time in California right now?
No, just this week. Basically we’re not here after this week until the beginning of next year.

How’s everything going coming back?
Good, thankfully. Everything’s good. [My] body’s adapting really well. Obviously having a little bit more time off this year, was rested and stuff. It’s good. I’m excited and I’m hungry for the year ahead. The preparation is going really well. The tracks are good. Working with Aldon [Baker] and team KTM has been going really well. I’ve got Marvin [Musquin] and Jason [Anderson] and Zach [Osborne] there in Florida, so we’re pushing each other hard. It’s a process but we’re ramping up. I’m excited.

How’s the training load right now versus during the normal season?
Everything’s just a little bit more volume. More gym. Each day that we’re in the gym it’s just more. The riding is more quality. I’m not trying to do 100 laps—I’m trying to get a really good amount of laps, but in a smaller window. Just for doing a bike ride it’s an hour and a half, two hours, up to three hours sometimes. The volume is much bigger. Obviously we’re off on the weekends so we have a little bit more time to rest too.

How different is the bike now versus in May when you were doing supercross?
Same bike, completely everything. Small component changes. A little bit of chassis changes, a little bit of suspension changes. That’s it. I feel like we had a really good package last year, we were just lacking a few areas with the bike position and the balance. I feel like we were able to find that and we’re moving forward in a good direction.

Did you enjoy your summer off? Obviously it wasn’t what you wanted.
No, it’s not what I wanted but sometimes what you want and what’s good for you, it worked out better. Would I have liked to have been out there racing? Absolutely, but I had to see it as a positive and not have a pity party. It is what it is. I think first and foremost I had to be thankful it wasn’t worse. It was a back [neck] injury. I’m glad I’m okay. Just made a little error there and it cost me. I was able to use those two months to just kind of take the time to recharge and reflect and enjoy some other things. I didn’t want to sit there and mope around and be bummed. I had to really kind of go out there. I went home and spent some time with my family, me and my wife did. We’re from Minnesota. Did some things I haven’t gotten to do in a long time. I think it was good and refreshing and rejuvenating.

So you feel refreshed coming back in with the summer off?
Yeah. It’s good. Both physically I feel like the body’s adapting and mentally just being able to get a little bit of a break. It’s a tall load but it’s no excuse. Over the years, even with the physical side, I’ve pushed myself further than I probably should at times, unknowingly. But through trial and error you learn. It’s good. I hadn’t had two months to let my body heal like that in a long time, in ways that I probably don’t even know how. But it was good as we were healing up not to have any side effects from the neck injury or anything. I was able to heal it and not rush back into it and take my time getting ready for this season.

Are there any lingering effects from the injury?
No. I didn’t have any. There’s other guys I know that still have problems. So I got to count my blessings too.

You’re going for three in a row. Big pressure?
No. Honestly the past is the past and the goal is to win races and championships. That’s what we’re paid to do. We’re not paid to get fourth, fifth. If I’m going to do it, I want to do it right and 100 percent. If I’m in it, I’m going to be in it to win it. I want to be there every weekend and prepare for that. So it’s a challenge we have but the racing and everything is only getting tougher and the competition is getting more. So we’re going to have to really use our experience and what I’ve learned over the years and apply that well. Just be ready to go every single weekend and not be afraid to fail. Sure, I’d love to do it again but if I do it this year everybody’s going to be, “Well, what about four?” That’s never going to end. I think the thing to remember is just give it my best. My best is my best. I’m going to give it my all, and I hope that’s enough.

This is the last year you’re going to race at the end of your contract, which is coming up next year. Do you plan on staying with KTM? Anything beyond that at this point?
I’m KTM for life.