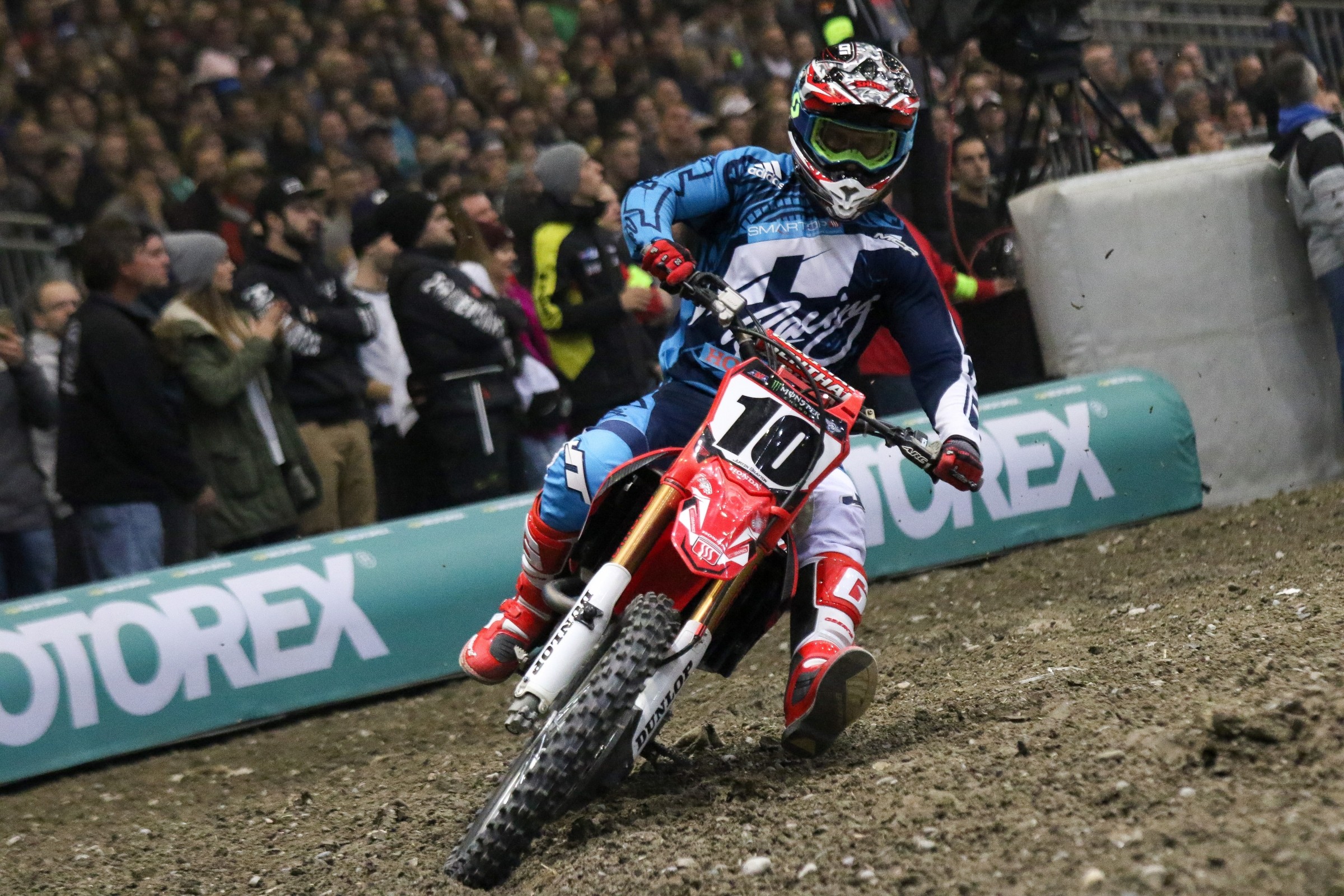 Justin Brayton has done himself a whole lot of good by racing these off-season supercross races through the years. Like, he’s made serious cash by showing up and always being a contender, including this weekend in Geneva where he finished second overall to Marvin Musquin.

But is the move to the MotoConcepts Racing team for 2017 a good one? That team has generated controversy in the past, and Brayton knows that, but he’s also willing to give them a clean slate. How will it go for Brayton?

Lewis Phillips of MXVice.com grabbed an interview with Brayton after the weekend's final race. You can listen to the interview here or read it below.

Racer X: Whenever you come to a race like this you want to win, but looking at the positives you improved your weekend and got on Marvin’s pace by tonight.
Justin Brayton: I honestly think I had the win last night. I just had a little clutch malfunction with the last four laps or so, so I couldn’t skim the whoops, but no excuses. I didn’t have anything for Marvin tonight, either. I do feel like I would have had the win last night with four to go. Just was a little bit off. There’s been a lot on my plate with traveling, and I hadn’t rode supercross in three weeks. Traveling from Australia to the U.S. to here—it’s been a lot. So I’ve been pretty flat all weekend, but I’ve had fun. I love coming here to Geneva. You can’t take anything away from Marvin. He’s riding really good. Excited to get back to the States and start riding the 2017 and start testing with the team. It’s an exciting time right now.

A close battle tonight and about two laps in you moved to the inside in the turn before the whoops. Was that just a move because you saw that Marvin could cut you off as soon as you’d run around the outside?
The whoops were getting really tough. You couldn’t really get much of a drive from the outside. Marvin almost passed me there two laps in a row. So it was like, I just need to cover the inside and jump through them. I’m not a big fan of jumping through whoops and Marvin, that’s his biggest strength. I really kind of rely on my whoop speed but I just needed to jump through and cover my inside. It actually was a lot easier because it took a lot of energy to go outside and skim because they were pretty tough tonight.

Then he cut you off in the long rhythm where you were going triple-quad-quad. Any bad blood about that? It was maybe a bit sketchy, but racing’s racing.
Racing’s racing. It is what it is. I don’t know if I had much for him tonight, so yeah, it is what it is. Me and Marv are good buddies. I’ve been a fan of his for a long time. We’ve raced over here for years. It’s cool. We battled here probably five years ago and we’re still battling. I think he won his third tonight. I won my fourth last year. We’re going to keep it rolling.

As you said, you’ve been over here a few times now. Made a good living out of it. Got some good momentum. Are you surprised more riders don’t do this? Obviously it’s working great for you.
I think a lot of guys, there’s always assumption of injuries and they might get hurt. I just never try to live by that. I think we race motorcycles for a living and to take a long time off is really tough. I just think racing is good. I don’t want to call it a hassle but it can be tough to get parts or ship a bike…. It can be tough on the mechanic and stuff. To just ride at the test track for three months, I’ve never been a fan of it. I like to try and plan it to where you’re home for three or four weeks and do some testing and then go race. Just see how your bike is under race conditions. This year I obviously did it a little bit different with going to Australia and racing the whole time. A lot of that’s just more for life. Just having a lifetime experience with my family in a different country. I’ll look back on these times and be thankful on them. My motorcycle has taken me a lot of places to ride and I’m thankful for each and every time. I think it only helps for me in America.

You signed a new deal with MCR [MotoConcepts Racing]. When signing the deal, did the bad rap that the team get maybe put you off a little bit? Obviously with the Alessis and everything that’s gone on in the past the team does have a bit of a bad reputation, but that is in the past.
My parents always taught me never judge somebody until you know them yourself and you get to make your own judgment. I think the past few years they’ve had a pretty clean slate. I always start off with people with a totally clean slate until they do me wrong. They’ve been nothing but fantastic to me so far. Obviously it’s the beginning stages. But there are certain people I’ve talked to that have always really enjoyed being around them. The reality is Mike Genova has been racing for a long time. Tony Alessi is a racer’s guy. He just gets the motorcycle. He gets the racing aspect. I’m thankful I get to bring my mechanic Brent. He and I have an awesome relationship. He knows me really well, knows how I like the bike. Then with Honda support, any time you get any type of Honda support is fantastic. My relationship over the years with Honda—I’ve had my best year of my career on a Honda in 2012. So I jumped at it, honestly. I think it’s going to be a great deal. I think we’re really going to turn some heads when we show up at Anaheim with a totally different look and new vibe and all that. There’s been teams in the past that have had a little bit of a stigma, and then they hire a certain rider that people have respect for in the industry and it’s totally changed that team around. I feel like some people do say they have a bad rap. I hope I can change that, or at least help with it. I’m not looking to change anything, but at least help. I’m excited for it.

What level of support will you have from HRC? Is it comparable to what [Ken] Roczen and [Cole] Seeley will be riding?
No it won’t be comparable to what they’re riding. I will get factory suspension but beyond that MotoConcepts will be doing a lot of the stuff, engine work and all that. Thankful that Showa has stepped up and they’re going to give me some factory parts. Honda’s giving me some bikes. Been around Kenny and Cole a lot at the test track before I went to Australia. They had nothing but great things to say about the bike. So I don’t think it will be much of a learning curve at all. I think the bike’s going to be really competitive with what I’m going to be having on it.