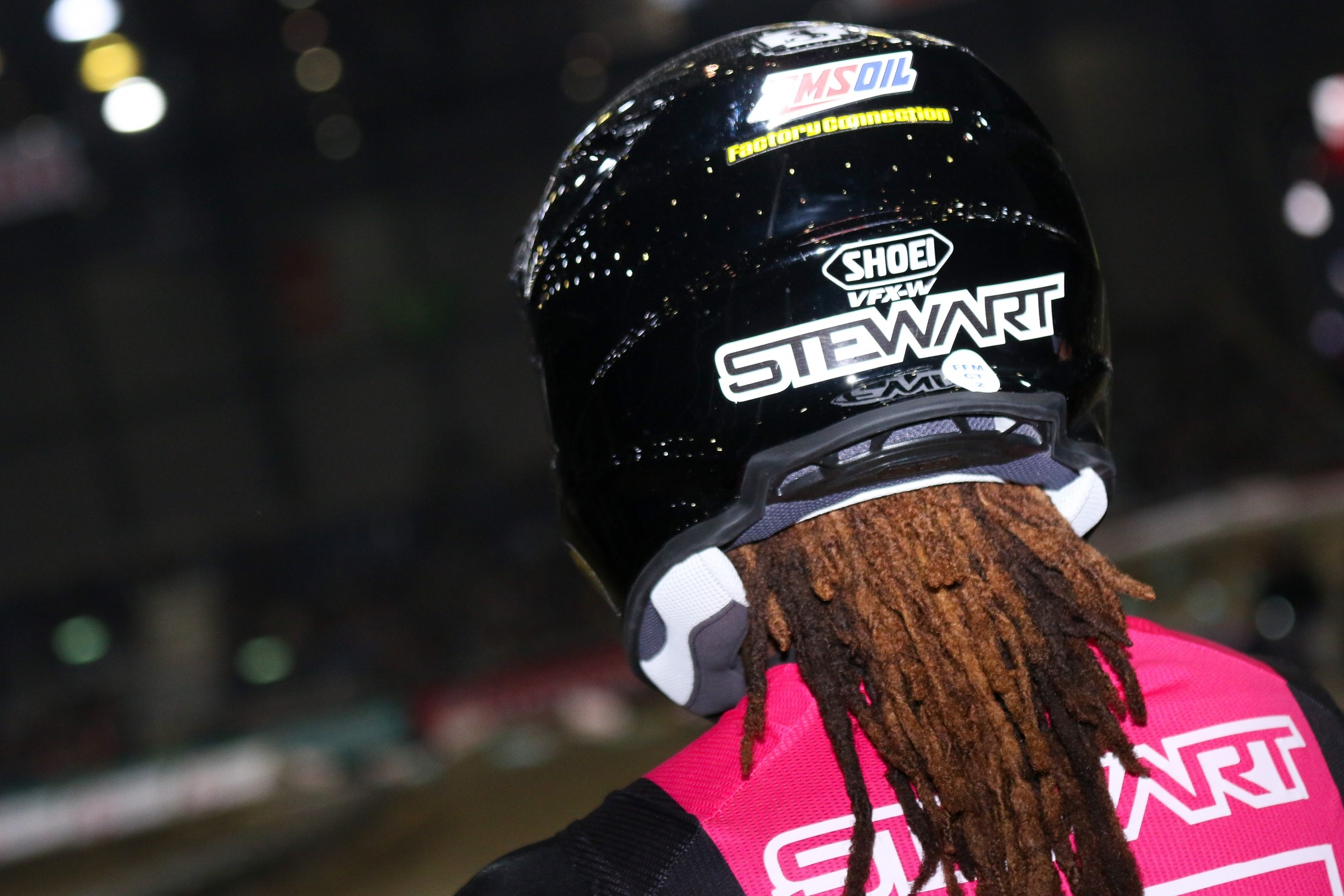 Malcolm Stewart turned in a solid weekend at the Geneva Supercross, taking third overall after a second on Friday and a third on Saturday, when he won a block-pass duel with Justin Barcia. But that’s not the real story. The news everyone wants to know about the 2016 250SX East Region Supercross Champion is if he will have a ride by Anaheim 1. Apparently, that’s not looking very likely.

Racer X: Results maybe weren’t what you wanted but overall you did show good speed and I thought it was a good weekend really.
Malcolm Stewart: It was a great weekend. Started off with yesterday, yesterday was good. Had some really good battles with Barcia, Musquin, and Brayton back and forth. I ended up getting second last night so that was good and came into tonight. I saw Marvin and Brayton was getting into it a little bit so I tried to catch up a little bit, but those guys were just a little bit better than me tonight. I felt like I wasn’t riding that well, but I didn’t want to crash either and just blow it all away. Barcia was coming and we kind of had some little battles here and there, but overall I can say I’m happy. I can say I’m happy when I get to go home and see my family.

Speaking of those battles, were you happy with of it all? Anything maybe crossed the line?
No, no, no. As soon as we got done we shook hands. The first thing he said is, “That was a great race.” I said, “It was a great race.” We got in the pits and he came over and said that was fun. We didn’t do anything that was out of the ordinary. We both stayed on two wheels—that’s what mainly counts. Those battles like that, I’m okay with. It’s when they start getting to a point where it starts getting a little dangerous is not when it’s okay. But we’re already in a dangerous sport as it is so the little battles like that just make it more interesting.

You had that triple-quad-quad pretty good. One of the only guys I’ve seen—Marvin was the other. He had a full factory bike, you didn’t. Were you surprised you could do it so consistently?
[I did it] Until it got really rutty before it where you kind of needed that power, but I was surprised I was getting it. I did a lot of crazy things even when I was on the Lites bike so now that I am on a 450, it made life a lot easier. But I’m just going to take everything I got, go back to the States and … I don’t know, honestly. I really don’t know what I’m going to do. I’ve got to get my bike back. From here on out I don’t know what we’re going to do for the next five weeks.

So there’ve been no developments since I last spoke to you? Still privateer at A1?
I’m still privateer as we speak right now. The way things are looking it’s probably going to stay that way unless something happens. I ain’t trying to say I want something to happen, like any rider could get hurt, by any means, I’m not saying that. It’s a dangerous sport as it is. But something will come up here soon. If not, try to do the best I can on my own. I got second last night and third tonight. It’s not like I’m slow. There’s a reason why I won the championship this year. We’re going to take everything we’ve got and keep moving forward.

So those social media posts from Chris Crossland [owner, Crossland Racing] proved to be false—there’s nothing going on there. Rock River did something similar when those photos came up. Nothing there either? Is there maybe a possibility?
No, I wish they would do something! Maybe it would take the pressure off of me. No, as it stands nothing right now, no. I would like for those people to call me, please. I ain’t really trying to pay out of my pocket to do this. What guy do you know that wants to pay to work, pay to go to their job? [Laughs] But I guess it’s all part of it. There’s a reason why I’m in this situation so I’m dealing with it. I feel like I’m dealing with it pretty good.

When I spoke to you at the Arnhem Supercross you said if a ride didn’t come up you’d have a good season watching from the stands. It seems like that’s maybe changed a little bit and you will go the privateer route no matter what?
It has to make sense. I know what the price is to have a good bike and to do all the races and stuff like that—gas, food, bike parts. Just having suspension alone, you’re talking about having three sets alone. So there’s a lot of rotation and money that’s involved. It depends—you can have a good year where you may not crash, and you can have a real bad year where you’re blowing motors up and swapping the sub frames out and every kind of thing. So it just has to make sense for me. We got five weeks to go and if it doesn’t make any sense from here on out I got a lot of thinking to do from here. This is a real deadline for me to show up at A1. If things don’t go the way it goes I would say honestly in the next week or so, I won’t be racing A1. I’ll try to make the best of maybe A2.

So say Anaheim 1 or a race you are going to compete in is tomorrow. You’ve tried plenty of bikes—what would you choose? Husky? Yamaha?
Honestly whatever’s going to give me the most support, at this point. You can ride any of them, but it’s whatever is going to try to give you the most support. As it stands right now I’m not really getting much support from anybody. [Laughs] I guess I’ve got to go the cheaper route and whatever motorcycle is the cheapest!

When you’re looking for that support are you sort of going to these manufacturers and sponsors with James [Stewart] and saying you could have both of us? Or are you going off on your own and trying to do your own deal?
I’m not even bringing James in this. He’s just doing his own deal. For me, it’s just trying to get people to pick up the phone, honestly. Everybody’s busy, though. What do you expect? You can’t expect to ask for much when you’re talking five weeks from Anaheim 1. Teams are testing and all kinds of things. If it was October and we were in this situation, I didn’t know it was going to be drug out this long, I wouldn’t be stressing so much in October but we’re in December. Christmas is right around the corner! These pockets are getting deep! I don’t have much to say, but I’m hoping that I will show up at Anaheim 1. That is the goal. If not, I’ll show up at Anaheim 2. And if I don’t show up at Anaheim 2, I’ll show up at Oakland! I don’t care! There are 17 races. I’ll pick one of them! [Laughs]