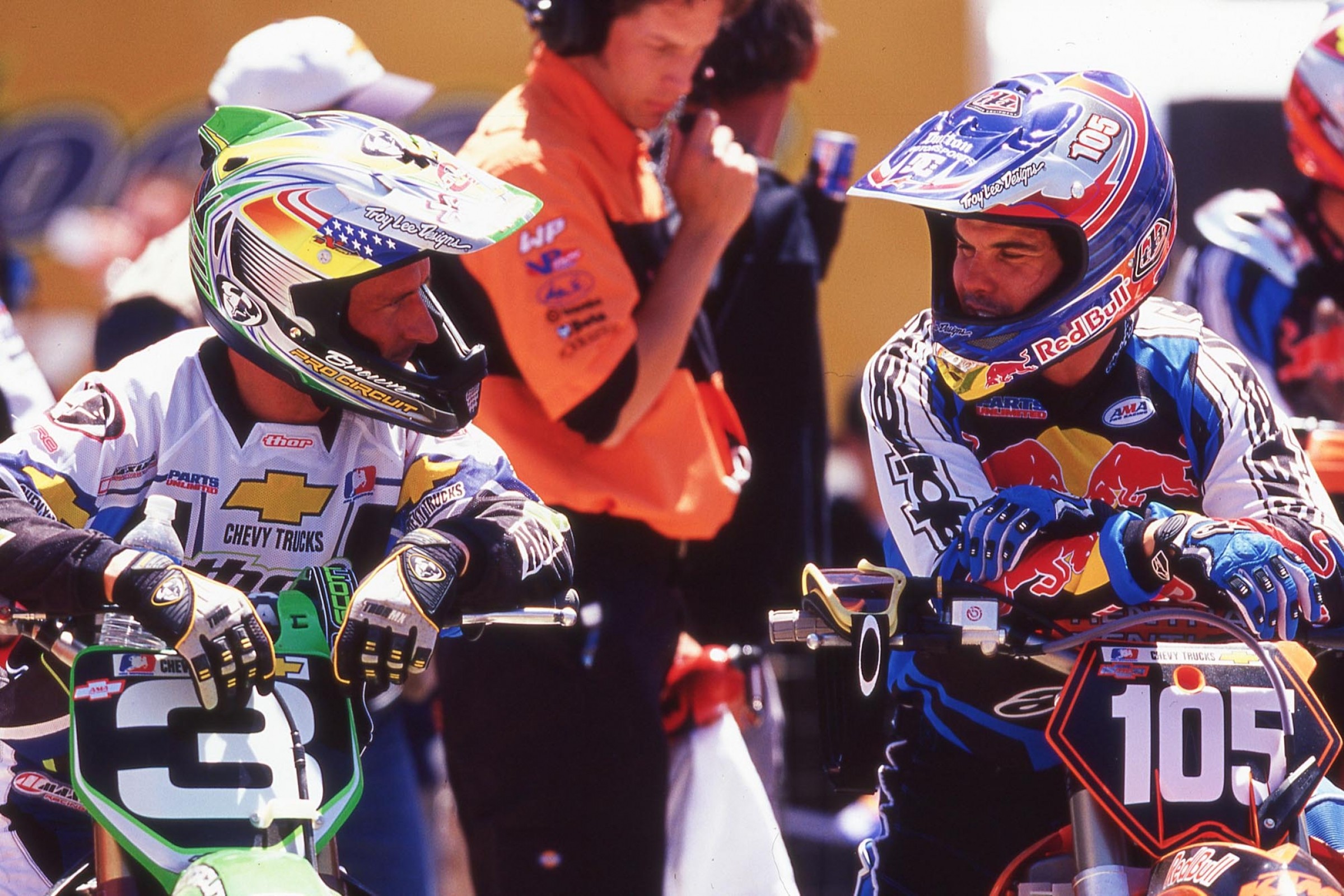 Welcome to Racerhead, in a post-Thanksgiving holiday, complete with a turkey-hangover. Many motocross families are gathered together down in Gainesville, Florida, for the annual Winter Olympics (Mini Os), one of the longest running and most prestigious amateur events in the country. (If want to follow along with all of the classes check the live timing and scoring here.)

Over in California, folks were getting their holiday cheer on while getting ready for A Day in the Dirt, the annual race/party at Glen Helen. And all across the country people were trying to battle through shopping lines as part of that commercial/pagan holiday known as Black Friday, which actually now starts on Thursday night, and continues into Small Business Saturday and Cyber-Monday and so on and so forth.

I'm just thankful to be home in Morgantown, West Virginia, because it's more packed with motorcycle enthusiasts than any other weekend except for the nearby High Point National. That's because the AMSOIL Grand National Cross Country banquets are this weekend at the Waterfont Hotel, and they are expecting 1,000 attendees each night, with the ATV tribe gathered there tonight and the motorcycle awards being handed out on Saturday night. The GNCC Series was founded by my dad back in the 1970s and is run by my mother, sister, and her husband Jeff Russell—and their son Kailub Russell earned the motorcycle overall title for the fourth-straight year, so he was in town early for not only Thanksgiving, but some cutthroat karaoke at my sister's house last night.

Beyond that, there wasn't a whole lot going on in the motorcycle world this week, just testing and training and everyone getting ready for Anaheim. The Stewart brothers still aren't signed to a team, we're not sure what's going on with RCH Suzuki and who will be lining up for them in 2017, Dean Wilson is still adrift as well, and Ryan Dungey and Ken Roczen and Eli Tomac and Marvin Musquin and Cooper Webb and Chad Reed and Cole Seely and pretty much everyone else in Monster Energy AMA Supercross are putting in the time on the bike, on the road, and in the gym, all getting ready to drop the gate.

Happy Thanksgiving, here's some news of the week....

I’ve been a little silent these past few weeks with a broken wing sustained at Glen Helen the Thursday before World Vets. I was doing a shoot/ride day of everyone practicing when, during my own moto, I tucked the front going into a left-hand turn and wrecked my shoulder. I somehow managed to dislocate my shoulder, break the head of my humerus off, break my collarbone, break my shoulder, and tear my rotator cuff. Whoops.

I was getting a little restless on the couch as today is the three-week anniversary from my surgery. So this week I put my sling on, dusted off my camera, and hit the hills to take advantage of the rain that SoCal got (yes, rain in SoCal). Arik Swan invited me out and introduced me to join the rest of the day’s crew who consisted of Jimmy Hill, Vinnie Carbone, Keaton Ward, Colby Raha, Trey O'Brien, Noe Ortiz, Matt Collins, Kyle Styles, Brad Murray, Hunter Olsen, Max Krause, and Robert Franco. They watered, packed, rode, and repeated. These guys were throwing fat whips, old school cliffhangers, Indian Airs, Kiss of Deaths, and more. This hills session was a good change up from the racing scene with no pressure to get faster or emphasis on bike setup. Instead the emphasis was on good times and enjoying time with your friends, which is what Thanksgiving weekend is all about. Hopefully you had a nice meal yesterday with your family and friends and hopefully you get some relaxation this weekend.

Swan and Hillsack won’t be relaxing this weekend. They spent their turkey day at Glen Helen getting ready for A Day in the Dirt, which began today and runs through Sunday. A Day in the Dirt is known as the “MX Woodstock” and I’m happy to be going for the first time this year. Classes are still open so if you haven’t already signed up, you can do so here. It may rain, so be sure to check the weather.

Americans at the Transborgao (Andras Hegyi)

If it's November, it is time to get to Transborgaro, the famous vintage motocross event in Italy, near the city of Turin. This year marked the 38th running of the Transborgaro event. This year Transborgaro moved to a brand-new venue because the old track was being encroached upon by urban sprawl in the area. Among the field there were three American legends: Broc Glover, Jeff Stanton, and Chuck Sun. For them, Transborgaro is just like going home because they keep going to take in this Italian race year after year.

The six-time AMA Champion Broc Glover retired from professional racing after winning the last moto of his career in 1989 (which began in 1976, by the way), while racing a KTM in the 250cc Grand Prix series, but since 2014 he has always returned to Transborgaro. The Golden Boy once rode in the category for '70s motorcycle heroes, and 56-year-old Glover repeated his 2015 performance. In the 39-rider field, the still-fast, still-in-great-shape Glover got double-moto wins even though had had an injured finger. In moto one, Glover won after coming from behind while in moto two he won with superiority.

Also, the 60-year-old Chuck Sun raced in the category of '70s heroes. The 1980 AMA 500cc National Motocross Champion hasn’t slowed down much either, and he finished third with 3-4 moto finishes. Among Glover's and Sun's rivals there was the Belgian Marc Velkeneers and the Flying Dutchman Pierre Karsmakers. The former 125cc Grand Prix star Velkeneers was seventh while the two-time AMA champion Karsmakers was 16th—and Pierre is 71 years old!

Also, the other six-time AMA Champion, Jeff Stanton, is a well-known visitor at Transborgaro. The 48-year-old former Team Honda star raced in two categories. In the '80 class, in which there were 31 riders, Stanton had no real opposition and he won with huge gaps, leading every lap in both motos. He did it having famous rivals, including 1985 FIM 125cc World Champion Pekka Vehkonen, Italy’s own Massimo Contini, and Swedish star Jörgen Nilsson.

Stanton also participated in the category of '90s legends (His six AMA titles, three in SX and three in 250MX, came between 1989 and 1992, and his pro career ran from 1985 through 1994, so he was perfectly placed for both categories). This class was the most thrilling one because it had an exciting duel. In the 25-rider field Stanton battled against the two-time Italian world champion Alex Puzar in both motos. In moto one, Stanton defeated Puzar but in the second one the 48-years-old Puzar beat Stanton, which made his home crowd very happy. Puzar became the winner of '90 class overtaking Stanton.

Here is a link to some of Max Zanzani’s photos from the epic Transborgaro event.

The ageless Mike Brown finally decided to hang up his boots as a professional racer following the conclusion of the EnduroCross series in Ontario, CA, last weekend. Brown had one of the most diverse and epic careers I can remember, going from a Loretta Lynn's graduate in 1990 to a privateer winning in both AMA 125cc Supercross (Pontiac 1994) and AMA 125cc Motocross (Budds Creek 2005, when he was by far the oldest guy in the race). He also won an AMA 125cc National Championship, 125cc Grand Prix races in Europe, Loretta Lynn's as an amateur, EnduroCross, and even an X Games gold medal! To salute Brown's myriad of accomplishments and epic career, the staff all wrote out their favorite Mike Brown moments right here.

And in the comments section below it, my friend and colleague "MX Geoff" Meyer added his thoughts on Brown, who he got to cover for Cycle News and other magazines when Brownie was racing in Europe:  "What a great competitor. One of my favorite American's to race the GPs. His 2000 battles with Grant Langston and James Dobb were without a doubt the best racing I have ever seen in Europe. They just killed each other." Langston ended up winning that title, and then both he and Brown moved to America in 2001 to race Travis Pastrana, and Brownie ended up winning the very last moto at Steel City when Langston's rear wheel collapsed on a dramatic day.

But there's one thing about Mike Brown that I didn’t realize until I literally started writing this and glanced in the Racer X Online Vault. I've long thought (and probably incorrectly wrote) that John Dowd is the oldest AMA 125cc National winner for his Broome-Tioga win on August 30, 1998, when he was 33 years-20-days old. But then I looked at Brownie's last win at Budds Creek '05, which was held on June 19, I realized that Brown was actually 33 years-49-days old at that point. So while John Dowd was the oldest at many, many things, Mike Brown actually has the spot in the AMA Motocross record books as oldest AMA 125 National winner ever—and he's had it for nearly a dozen years!  Here are all of Mike's supercross and motocross results over the years.

Congratulations to Mike Brown and his whole family for reaching this finish line!

Earlier this week Nick McCabe caught up with Gary Jones, the original AMA 250cc National Motocross Champion, for a “Where Are They Now?” feature.

"Today's piece on the website about Gary Jones was pretty good, but I need to point out a small error you made. You mentioned Gary was the first-ever AMA MX champion, but that is not true.  That honor belongs to 1971 500cc AMA MX National Champion Mark Blackwell. Gary was, however, the defacto 1971 250cc MX Champion."

So I pulled out the record books—the really, really old ones— and here's what we found out, and what I wrote back to Jim:

Well, Mark Blackwell beat CZ rider Brad Lackey by one point (604 to 603) with none other than Gary Jones third (429).  None of them were in the top-10 overall in the series, which was won by Suzuki rider Sylvain Geboers.

In the Inter-Ams, Jones bettered Jimmy Weinert (458-380) by a clear margin, with Jim Wicks third. CZ rider Vlastimil Valek won the series and Jones finished seventh overall, so he was the AMA 250cc National Champion.

Here's the thing: The Trans-AMAs began on September 19, 1971, at Carlsbad. The Inter-Ams ENDED on August 1, 1971, at Unadilla. Technically, Nick is correct: Gary Jones won his AMA 250cc title before Blackwell.

But if we really want to get technical, the 1970 "First American" was a college student who finished fourth in the Trans-AMA Series. His name is Dick Burleson—yes, THE Dick Burleson!

Uwe Froehlich edged out Kenny Kaplan with 52 percent of the votes to proceed to the finals of the Racer X Amateur Film Festival. Last weekend, he was in Germany for a round of the ADAC Supercross Championship. Check out the highlights featuring Americans Nick Wey, Kyle Cunningham, Gavin Faith, Chris Blose and more.

The Racer X Amateur Film Festival finals are officially underway! Go vote for one of the four finalists through Thursday to help them win cool prizes from MotoSport, WASPcam, and BAK Industries.

Racer X Brand is having a Black Friday Sale starting now through the end of Monday. You'll get 25 percent off site-wide using the code "BLKFRI16" at checkout, which means up to 65% off on some of our heavier discounted items! Quantities are limited—get 'em while they're hot.

Looking to give someone a gift that keeps giving every month for a full year? Subscribe now for as low as $9.98 to send someone 13 issues of Racer X Illustrated and a 13-month Racer X calendar that features our favorite covers and riders from the past 20 years. We'll even send you a free Racer X calendar as a bonus!