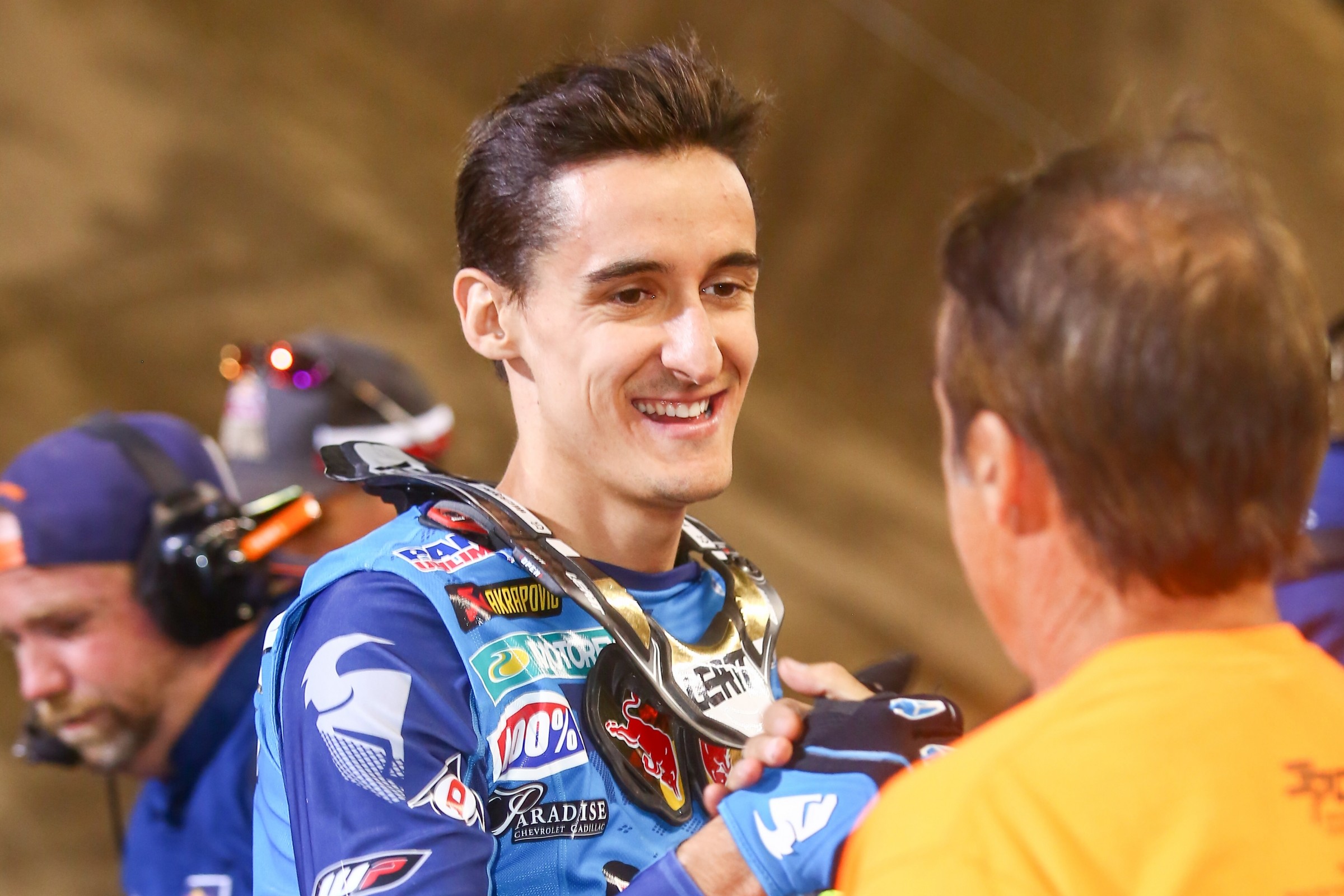 The field wasn’t as deep as last year, but we finally saw Red Bull Straight Rhythm in full on Saturday, as the event led to some unique results we’re not used to seeing at a regular supercross event. Clearly, the straight track played to the strengths of Red Bull KTM’s Marvin Musquin, who pretty much dominated the Open Class throughout the event. Marv had the fastest lap times from practice and qualifying all the way through the finals, when he beat teammate Ryan Dungey—who, oh yeah, is the defending Monster Energy Supercross Champion—straight-up twice to clinch the event win.

So, does this event favor Marvin’s talent and skills, or is this a sign that he continues to get better on a 450? We called him on Sunday afternoon to find out, and Marvin took a break from a birthday party for his mechanic, Frank Latham, to chat. He’ll spend this week in California before heading to Florida to begin Aldon Baker’s boot camp next week.

Racer X: Congratulations. Did you expect to do this well?
Marvin Musquin: Um, not really! I knew I could be really good at it, but on a 450 against Ryan Dungey, for example, yeah, I was looking forward to the event but you never know what will happen. I love Straight Rhythm, and right away I was feeling very comfortable, and I was really excited, but you never know. It worked out really, really well.

When you first heard about this event, even before you raced it in 2014 and won the Lites Class, did you think, Hey, this is something that could really work for me?
Yeah I think so. Actually the very first time I heard about it from Jeremy Malott at Red Bull, I thought it would be good, but I did think it would be much slower. The first time we tried it, they built a Straight Rhythm track down at Jeremy McGrath’s place, and we went down there and man it was so much fun! It was a success. All of the riders so far have loved it. The two times I have done it, every rider I’ve talked to has said it was so much fun.

Is it hard to actually memorize this stuff? When a run is over, do you immediately know what sections you got right and wrong?
It takes a couple of runs to memorize the course, but the good thing is, those speed checks, the walls, when you roll those things, you kind of pause there, and then you think, Okay, next comes the rhythm section or here comes the whoops. At first we weren’t sure if we could memorize it or not, but it really wasn’t that bad.

Seemed like traction was a thing on Saturday?
Yeah during the afternoon it was really hot and really dry, and the right side, I guess it was closer to the fence and some bushes and things, so it was a little more in the shade, and it kept a little more moisture. It was only different on the first set of whoops, and it was better on the right side because they didn’t get so dry. Otherwise the rest of the track, the two sides were identical. The dirt was good, a little hard, but it was good, and it didn’t get rough. It was nice.

Do you get faster when you’re pushing harder? Or does pushing harder lead to mistakes, like over jumping?
Yeah you can go faster when you push harder, but my last two runs against Ryan, they were really good, but I feel like I could have been better. If you look at every single jump, there’s one jump where I over jumped, and I had to triple onto the next table, so I had to just send it to get up there, and you could see I faced the next triple and my front wheel went high—much higher than Ryan. Ryan got right next to me there. So maybe if I hadn’t made that mistake I would have done better, but then again maybe Ryan made some mistakes also. So that’s why it’s so intense. It’s so unique. You can make some mistakes, but not too many because the guy right next to you is going to get by and then he’s gone.

Do you get the same feelings going to the line as a regular race?
Yeah you do, and it’s funny because I was just thinking about that, like, it seemed like a really fun, mellow event, but at the end you’re lining up behind the gate, and you want to be the best. Ryan Dungey, Trey Canard, Josh Hansen, those guys are not going to wait for you. Also, it’s a long day because you have to wait for your run, and after awhile I was like “C’mon let’s go! Let’s get out there!” while you’re waiting for others to make their runs. You’re thinking about it and you start to get worried that you might make a mistake during your run. It actually gets stressful just like other races—that’s why we love this sport, we love that adrenaline, even if it’s stressful.

You raced the last three weekends—SMX Cup in Germany, Monster Energy Cup last weekend, and now this. What was that experience like? Was it fun? Are you looking for a break already?
Yeah me and Ryan, we traveled together to Germany, and we had the same program and schedule that Aldon makes for us. The amount of laps, the amount of cardio, it was really calculated around the schedule of these races. We had some good training and a good amount of laps, but nothing crazy. I’m happy now I get a pretty mellow week before we start the main training for next year. The three different races were pretty cool. We made some changes to the bike and we could see that they worked, and I gained confidence in myself. Even though it’s still two months until Anaheim, it was still good.

Did you ride or train while in Germany?
Well, we didn’t ride, but we had to do cardio.

Hotel gym?
Actually, the hotel didn’t have a gym. So me and Ryan had to go for a run. It was really cold out, about five-degrees Celsius, and it was misting and raining a little bit. We had jackets and beanies on, it was foggy and so cold! We looked at each other and were like “Dang!” But it’s okay, that makes it a little special. You’re training in a different country, we ran downtown next to a river. Sometimes you have no choice. You have to do it.

This is basically the end of your rookie 450 season. How much have you improved?
I’ve definitely learned a lot. When I first got on the 450, I was coming off of the broken wrist from the 250 and it was tough. I finally got that fixed with surgery, and the recovery was tough, so it took a while to get strength and confidence back, and then I’m on a new bike—I had never really ridden a 450 before. I jumped on it with Ryan’s setup. We tried a couple things, but we trying not to go in crazy directions, I didn’t want to make big changes. Looking back, maybe I should have. It was tough. The practice tracks and the race tracks are so different, and if you don’t have confidence and you’re not comfortable on the bike, it’s tough and even kind of scary sometimes. But I kept getting better and better, and I almost won a 450 race in Atlanta. Now we’ve made some more changes to the bike and you could see at Monster Cup that I was riding better. I’ve learned a lot and I’ve gained more confidence. I’m riding better and I’m more comfortable on the bike. Somedays at the test track I’m matching Ryan or even faster than him. It’s great to have this confidence right now before we even start the boot camp in November. I am also going to do Lille Supercross in France and Geneva in Switzerland, and those should be fun. I’m really looking forward to racing.