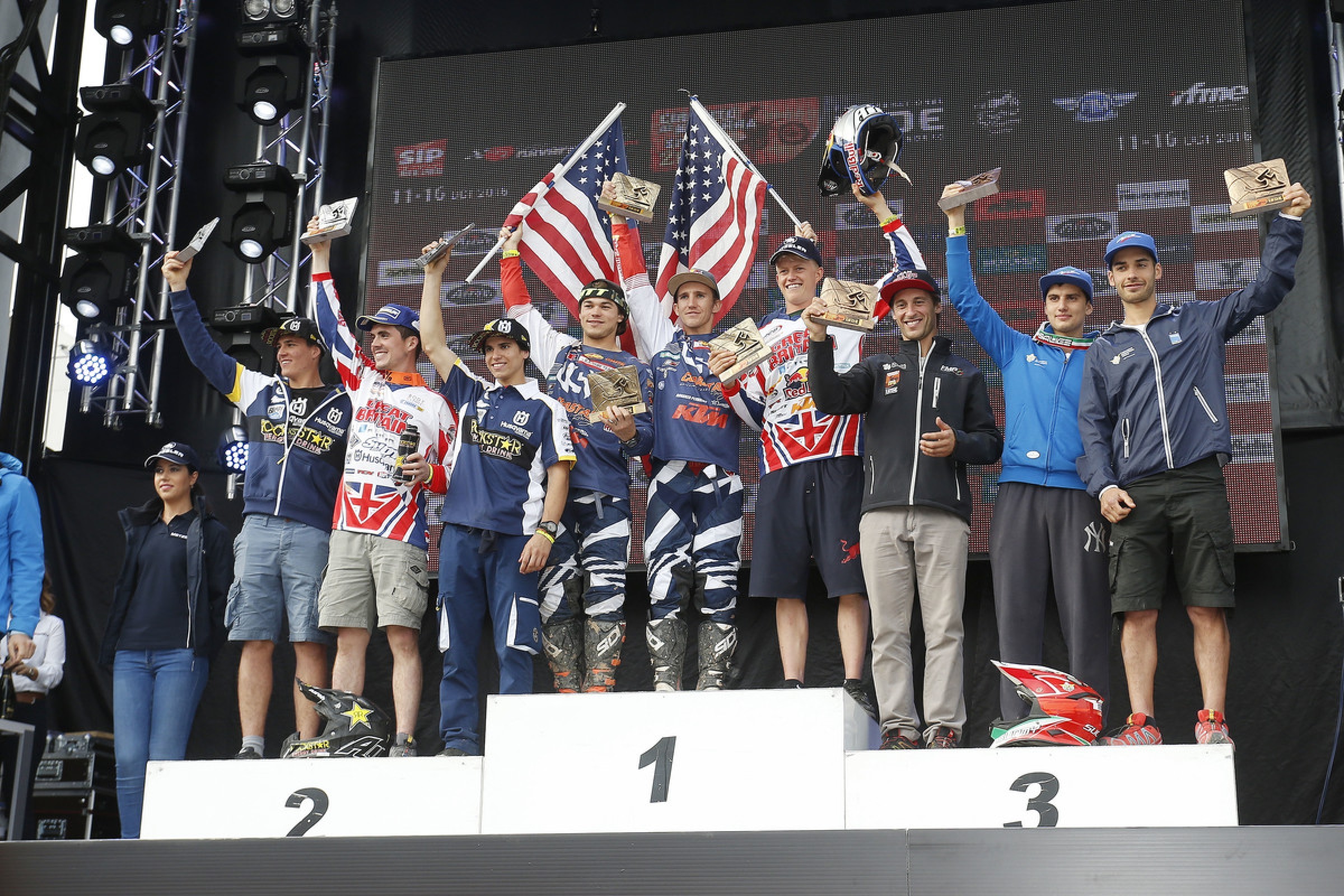 Last weekend Taylor Robert, Kailub Russell, Thad Duvall, and Layne Michael made motorcycle racing history by becoming the first American team to win the International Six Days Enduro, an event that’s been going on for 91 years (not including a break for World War II). In honor of that achievement, we wondered what were some other "first American" moments in motorcycle racing?

Bud Ekins scored the first FIM World Motocross Championship point for an American with a 10th-place moto finish at the 1952 British Grand Prix. Ekins was there to ride some enduro events and entered on a whim. He would later gain fame for making the Tijuana-to-La Paz Baja trip in under 40 hours with his brother Dave, a huge moment in the development of Honda motorcycles. They would both ride with Steve McQueen on the 1964 Silver Vase team in what used to be called the ISDT (International Six Days Trial, which is now referred to as an enduro, as in the ISDE.) But he’s most famous for being the stunt double for McQueen in the climactic scene in the Hollywood blockbuster film, The Great Escape, where he jumped a barbed wire border fence on a stolen motorcycle while trying to escape the Germans.

On July 4, 1969, Gary Bailey beat Arne Kring and Alan Clough to win the first round of Edison Dye's 250cc Viking Series, giving an American the first win in a major race over European competition. Bailey is a true pioneer in American motocross and has taught generations of riders along the way, helping shape champions that ranged from his stepson, David Bailey, in the ‘80s to Cooper Webb’s formative years, via the Gary Bailey Motocross School.

Jim Pomeroy's win at the opening round of the 1973 FIM 250cc World Motocross Championship was significant in many ways, maybe the most important "first American" win of all. Pomeroy had never even entered a GP before, and his win was the first for Bultaco, or any Spanish brand. Two-years later, Pomeroy would became the first American to win a moto in the annual Trophee des Nations.

Kawasaki rider Jimmy Weinert became the first American to win in the Trans-AMA Series when he won the 1973 Rio Bravo round on a muddy day in Texas. The next American win in this series wouldn’t come until 1975.

America's first Motocross World Champion was "Bad" Brad Lackey, who was a 10-year crusade to become the 500cc World Champion, and he finally closed the deal in 1982 at the last round in Luxembourg. And then just two weeks later Danny LaPorte, a rookie in Europe, won the '82 250cc World Championship at the final round in Finland. LaPorte would later on become the first American to win a stage of the infamous Paris-Dakar Rally in Africa.

1982 was also the year that Danny “Magoo” Chandler became the first American to win the individual overall in both the Motocross and Trophee des Nations, sweeping all four motos in stunning fashion, in what were arguably two of the most shocking wins in motocross history.

America's first two-time FIM World Motocross Champion is Trampas Parker of Shreveport, Louisiana. Parker won the 125cc Grand Prix title in 1989 and then followed up with the 250cc title in 1991. Coincidentally, Minneapolis-born Donny Schmit would be right behind Parker, winning the '90 125cc title and the '92 250cc world title.

Last fall, former pro motocrosser and 250 Supercross main event winner Ryan Sipes became the first American to win the individual overall in the International Six Days Enduro, something countless American off-road legends—the Ekins brothers, Bill Baird, Dick Burleson, Eddie Lojak, Jeff Fredette, Larry Roeseler, Rodney Smith, Scott Summers, the late Kurt Caselli—have tried to do, but always came up short. Ironically, Sipes was set to be on this year’s U.S. World Trophy team, only to break his arm the day before he left for Spain in a freak accident warming up before a GNCC in Ohio. Even without Sipes, Team USA finally had the stuff needed to come out on top.