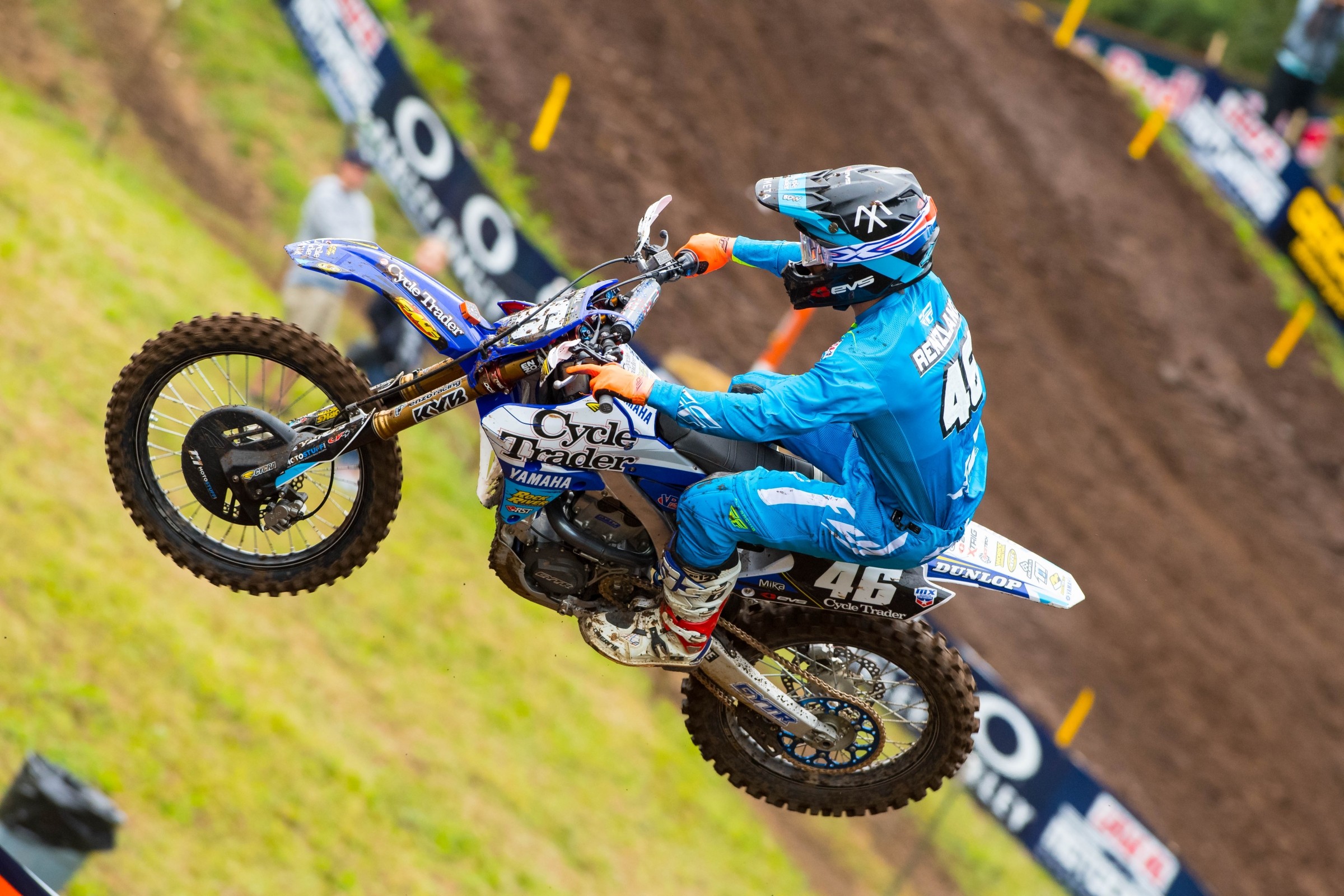 If you’ve never spoken to former CycleTrader.com/Rock River Yamaha rider, Luke Renzland, you’re missing out. Admittedly, he’s a bit shy at first, but as soon as he gets to know you, he’s quick-witted and downright hilarious to be around.

Renzland isn’t letting the fact that he doesn’t have a ride signed, sealed, and delivered for the 2017 season get him down. He’s currently hard at work getting his Dreamland facility ready for an epic family party on the 29th of October. He told us that there would be so much barbeque and volleyball at the party that it would melt our faces off. We’re not sure exactly what that means, but then again, that’s Luke.

We called up Renzland on Tuesday after he finished slinging some Georgia dirt on the bulldozer to get an update on his ever-eventful life.

You always like to say that. I have never been late before, but you insist that I was. You don’t make any sense.
You’ve got to do a better job at being on time, man. If I were a superstar like Chad Reed the interview wouldn’t even happen because I would be over you.

Yeah, but you’re Luke Renzland and that’s enough star power for me to handle.
Exactly.

You have a party coming up in a little over two weeks and you had to wake up at 6:00 a.m. to prepare for it today. Why?
Out here at Dreamland we have 69 acres and that’s not me trying to be funny, that’s just real. We have two supercross tracks, one motocross track, and one sand track. Between all the acreage and four different tracks, this is really the first time we are showing our friends from back home the property. All of our friends and family from New Jersey haven’t even seen it. We’re just trying to make everything look pretty, getting all of the grass cut, tracks prepped, and making it look as great as possible for when the family shows up.

How does a kid from New Jersey acquire about 70 acres of land to make their own Dreamland?
My dad owns his own excavation business back home. It’s heavy machinery, moving dirt, and they build a lot of cool stuff. Over the years, from the beginning of my amateur career to now, he’s spent every cent out of his pocket and put it into motocross. One day back in 2012 my mom was browsing through Vital MX and one forum was talking about land for sale near Florida. One thing led to another, we got in touch with the people, and my parents ended up buying the place. The next thing we did was hire Dream Traxx to build the tracks. Everything kind of just snowballed into this Dreamland.

You actually live on the property, right?
Yeah, my brother and I live in a doublewide here on the property. It’s just us here staying full-time. My mom, dad, and sister all live up in New Jersey where the business is. They get to come down a couple times of year, but other than that it’s just my bro and I. The two amigos are doing work out here.

What is a day in the life of Luke Renzland at the Dreamland facility?
This morning I woke up at 6:00 a.m. because I went to bed pretty late last night because we were playing Mario Kart. I brushed my teeth and threw on some clothes and it’s straight out the door. I was on the pavement by 6:30 dodging cars because it’s pitch black. I run for a half hour and then have a cool down walk for 10 minutes. I get inside by 7:10 and the smoothie gets thrown in. I put all sorts of berries in the smoothie, with pineapple, banana, chia seeds, whole milk, and ice. I blend that up and as that’s going on the turkey-bacon and eggs are getting thrown on the stove. All that is down the hatch by 7:45 and I throw on some blue jeans, boots, and my camo hat and I hop on the bulldozer at 8:00. I’ve made the track look all sorts of sexy until around 10:45; I got off the dozer for my interview at 11:00. He was late though and called me at 11:05.

I meant a usual day and you didn’t have to get that specific.
Well, you asked. So after the interview I’ll throw down some chicken and quinoa. You’ve got to cook the quinoa in chicken broth.

Luke, we get it, you like to eat.
I’m telling you, it’s the chicken broth that makes it.

"It’s really hard to find yourself in a bad place in the middle of the season. You don’t have anytime to correct anything."

We’ve got to bring up some silly season stuff. It’s getting pretty late in the year to sign a contract and be ready for 2017. How are negotiations coming along for you?
I think I’m in the same boat as everyone else right now. I’m still waiting for the final word. You can never be too sure in this industry until your deal is in ink. I’ve been in talks with a couple of teams. I hope everything gets ironed out and I hear back from at least one of them. Right now that is Plan A, but I’m also thinking Plan B, which would be the privateer route. Either way I’m going to make an effort to make it to the races this year. I’ll give it everything possible to make sure I land one of those premier rides for the following year.

This season you had a lot of issues and you didn’t get to show your best results. You turned it around at one point, but tell us how 2016 went from your perspective.
This was definitely a tough year for me. I had to learn a lot of things this year and it all started in Atlanta. At the first round of the East Coast, with three laps left in the main event, I was running inside of the top-10. I ended up endowing out of the sand section and I ended up breaking my collarbone right there. I missed three or four rounds with that injury and when I jumped back into things it was tough. I had the collarbone plated, so I knew it wasn’t going to break again. The X-ray showed that it wasn’t healing at all when I came back at Indianapolis. I was racing with a good amount of pain. I had that in the back of my head and I was riding cautious.

Out of the four rounds that I completed in supercross I was never outside of the top-10. I was never far enough into the top-10 to dice with the top guys to show what I was working with. When outdoors came around I had a few weeks to prepare for that. I missed the East Coast break when everyone does the testing, so I only had two weeks between Las Vegas and Hangtown. I switched up my program and started training with Gary Bailey. It was a tough transition going into outdoors and I was in a dark spot. It was the worst that I’ve ever felt on a dirt bike in my entire career. I was really down in the dumps, but I had no choice but to keep going through it. We worked really hard and towards the end of the season I had a few top-10 overalls. At Budds Creek I dabbed my foot in a rut and partially tore my ACL and fractured my tibia. That was the end of my season right there. I had a lot of lows and I figured out a lot about myself. I learned how to set up a bike better. I think I’m looking good coming into next year.

When you turned it around you were probably like, Finally, this is where I’ve belonged all year!
It’s really hard to find yourself in a bad place in the middle of the season. You don’t have anytime to correct anything. You go home and you ride three days and you’re back at the race the next weekend. You don’t have time to adjust your program accordingly to how you’re doing at the races. It took a while to dig myself out of that hole. At Hangtown I qualified 19th, went 19-19 in both motos, and I went home after that race lower than I’ve ever been in my life. I felt like I was trying my best and I was riding hard, but I’ve never been that far off of the pace in my life. Around six rounds in I started to see the hard work and adjustments pay off. I kept progressing from there until I got hurt.

How are you coming along with all of your injuries now? Are you good to go?
I’ve been back on the bike for about three weeks now and I’ve been training in the gym. The knee is feeling good. I have an ache and some soreness that I have to deal with after a hard run or something like that. Other than that I feel great and I’m just working on my skills until I figure out what I’m doing for next year.

What’s your deadline to locking down a team deal? In other words when will you start to plan out the privateer route?
In my mind I want to know what I’m doing in the next 10 days or so. After that I have to get the pen and paper out to figure out my own deal. I feel like if nothing even comes around then I have to give it my own effort at least for next year. I’m still new in this industry. I feel like I have so much more to offer as far as getting on the podium even for next year. I expect that out of myself. I’ll definitely be giving my all this season whether if I’m on a team or not. If I have an injury free offseason then I feel like you’ll see me up on the podium.

You’re an avid volleyball player. How is that going for you?
One of the highest points in my life right now is that my volleyball team has never been stronger. We’ve been training and at the party we are having a tournament. We’re having trophies made and it’s going to be a big wood carving of a guy playing volleyball, with dirt bikes jumping over him, and eagles flying. I don’t know know how we are going to integrate all of that into a woodcarving but we’re going to. My knee has been strong and I’ve been bracing it up out there. We’re going to fight for nothing less than to win that trophy.