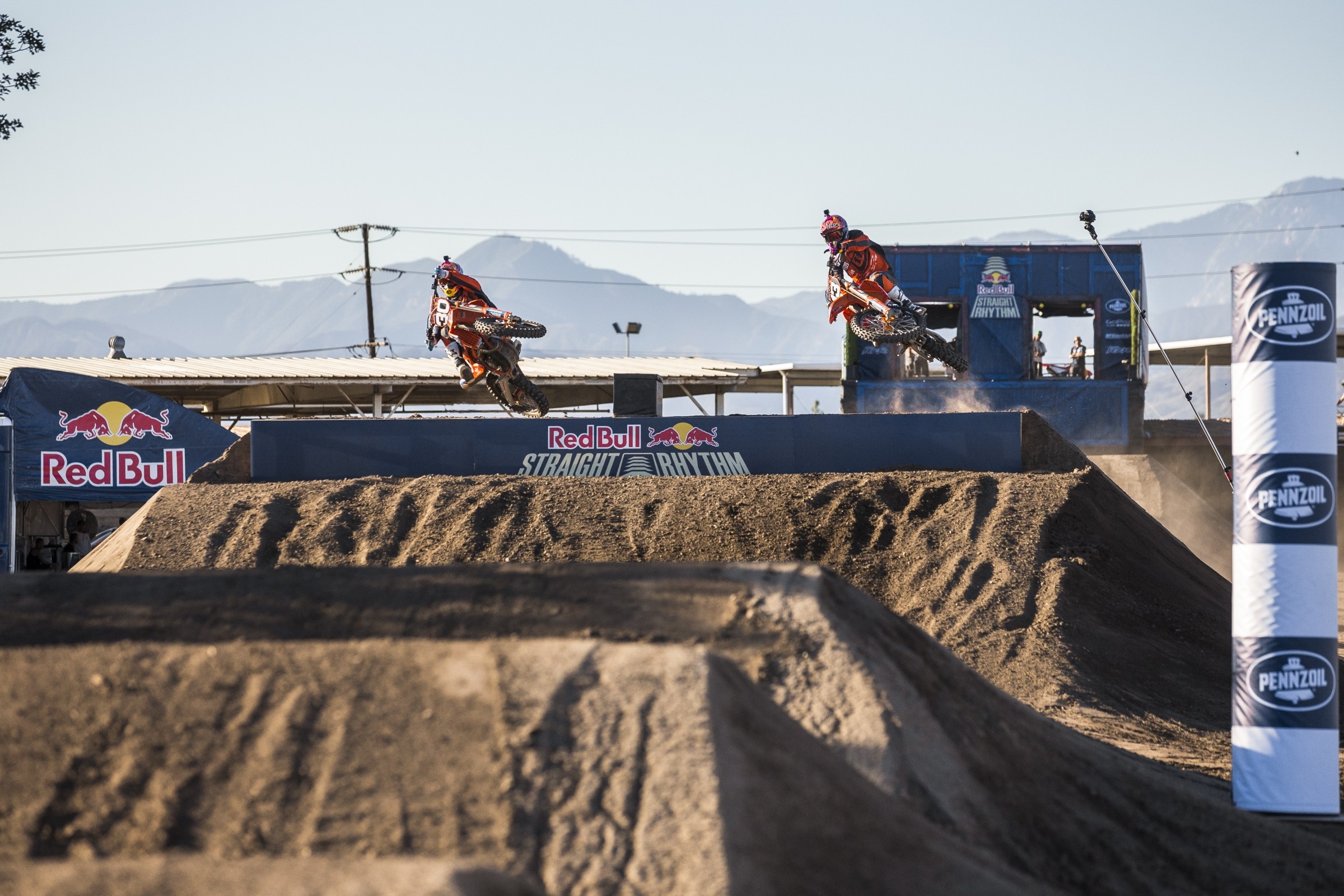 For a third-consecutive week, we’ll see the 2016 Monster Energy Supercross Champion in action. Two weeks ago, Ryan Dungey raced the inaugural SMX Cup and won the overall, then he finished as runner-up at the Monster Energy Cup last weekend, and will make his second-consecutive appearance at Red Bull Straight Rhythm this weekend. While most wouldn’t expect Dungey to excel at this event—it negates his strengths in fitness and corner speed—he was great in his first appearance last year, finishing third overall and pushing eventual champion, James Stewart, to the brink in the semifinals. “It’s almost a little higher pressure because you know you have to hit everything just right,” Dungey recently told Red Bull. “You can’t afford a hiccup because once you make that mistake because it's such a close race and you’ve only got a half-mile to make it back up.” Without the riders who bested him last year—Stewart and Ken Roczen—competing, look for Dungey to be a favorite this weekend.

Marvin Musquin opted out of the event last year as he was making the transition to the big bike, but the 2014 Lites (250) Champion of this event returns this weekend, and now on a 450. Musquin dominated in 2014, and this event seems tailor-made for his silky smooth style. Like Dungey, this will be Musquin’s third race in as many weeks, and he’s been impressive (has anyone had as quiet a third as Musquin did last weekend?). How will Musquin do in his return to the event?

Canard Debuts … In More Ways Than One

When Trey Canard signed with Red Bull KTM this off-season, it ended one of the longest standing relationships in the sport. Canard had been with Honda since 2007—signed to the Factory Connection/GEICO team as an amateur—and it’s the only brand he’s ridden in his pro career. This weekend will serve as the first time we’ve seen Canard on something other than red since his Team Green days. It will also mark the first time Canard has competed in Straight Rhythm—an event that would seem to suit his style. Canard can certainly scrub with the best of them. How will Trey do in his KTM/Straight Rhythm debut?

A change to note from last year. Instead of qualifying taking place on Friday to determine seeds, it now takes place on Saturday afternoon. The rest of the format is the same: at the end of practice, riders will have three runs, with their best run determining their seed. For the racing, riders will square off head-to-head in a best-two-of-three format in two different classes, Open (450) and Lites (250). The Open Class will feature a 16-rider field, with everyone qualifying directly to the main. The Lites Class will feature eight riders, with the 10-rider qualifying session determining those riders. The higher seed will have his choice of which side of the track he wants to run first, but then lanes alternate for runs two and three. Each class (Lites and Open) will have a respective winner, and there will also be a race for third between the two riders eliminated in the semis.

The lone factory 250 outfit scheduled to race this weekend is Troy Lee Designs/Red Bull KTM. Shane McElrath, Mitchell Oldenburg, and new addition Jordon Smith will all compete. McElrath returned from injury last weekend at the MEC, and Smith debuted with the team on a 250. McElrath finished second here a year ago, with Smith (then with GEICO Honda) taking third. If you’re making a list of favorites, it’s hard to argue against these three.

Former 450 SX race-winner, Josh Hill, will debut the Alta Red Shift electric bike this weekend in the Lites class. The world has been waiting to see what this bike can do, and this type of event could be the perfect match for it. Hill, now the two wheeled motorsports manager at Monster Energy, recently raced the 24MX Supercross in Sweden, and finished fourth overall but admitted it was a long night and he didn’t have the best fitness. “With my ‘desk job fitness’ the four mains were rough, man. It was a 60-lap night! I ended up fourth overall and best American, I’ll take that any day coming out of retirement.” Don’t expect fitness to play as much a factor this weekend, and judging by his testing videos, Hill could contend. “I think it’s going to be good out of the gate,” Hill told the Pulpmx Show Monday. “I think it’s going to be good coming over the walls. You can kind of tune the engine braking for however you want it. The whole thing is just programed.”

Remember the 500cc RM-Zilla Travis Pastrana rode at the inaugural Straight Rhythm in 2014? It returns this weekend, only this time it will be ridden by Trevor Piranha—not Pastrana. In the special event, Piranha will take on the outrageous, outlandish, down right crazy Ronnie Mac. Earlier this year, Mac and Piranha teamed up to destroy Pastranaland. This time, they’ll be mortal enemies, vying for cold hard cash—or a case of PBR. Mac has been training hard, but the Zilla has the power advantage. Who wins this epic showdown?

Factory KTM houses the favorites for this weekend, with Musquin, Canard, and Dungey expected to go 1-2-3 in some order. But, this event isn’t a typical supercross or motocross race and could allow for an upset. Behind the factory KTM trio is a group of privateers headlined by Josh Hansen, Kyle Chisholm, Nick Schmidt, Vince Friese, and Darryn Durham. Jeff Alessi, Austin Politelli, Deven Raper, Tevin Tapia, Axell Hodges, Dustin Pipes, and Gregg Duffy are also scheduled to compete. Can anyone break up the KTM party?

For the first time, the event will take place under the lights (the finals start more around dusk at 5:30 local) at the Fairplex.  The real key to this is it allows an escape from the pretty epic Southern California heat that washed over this event in 2014 and 2015—it might have been October, but temps hit the 100 degree mark each time. Also, the event has been moved back two weeks to further combat the temps. Hopefully this leads to a better experience for fans and reduced track maintenance. As for the rest of the show, the basic thought is that things look cooler under the lights, but we’ll have to see how well-lit the track actually is once the sun sets.

If you’re not able to attend the event, don’t worry, it airs live on Red Bull TV beginning at 8:30 p.m. EST/5:30 p.m. PST. That’s http://www.redbull.tv or on the Red Bull TV App—the show can be watched live in any country for free. If you miss that, there’s more: Straight Rhythm will be part of the Red Bull Signature Series as a 90-minute highlight on November 27, on NBC. The network shows are always a cool boost for the sport’s popularity, but those in the know will want to check it out live on the web this Saturday.