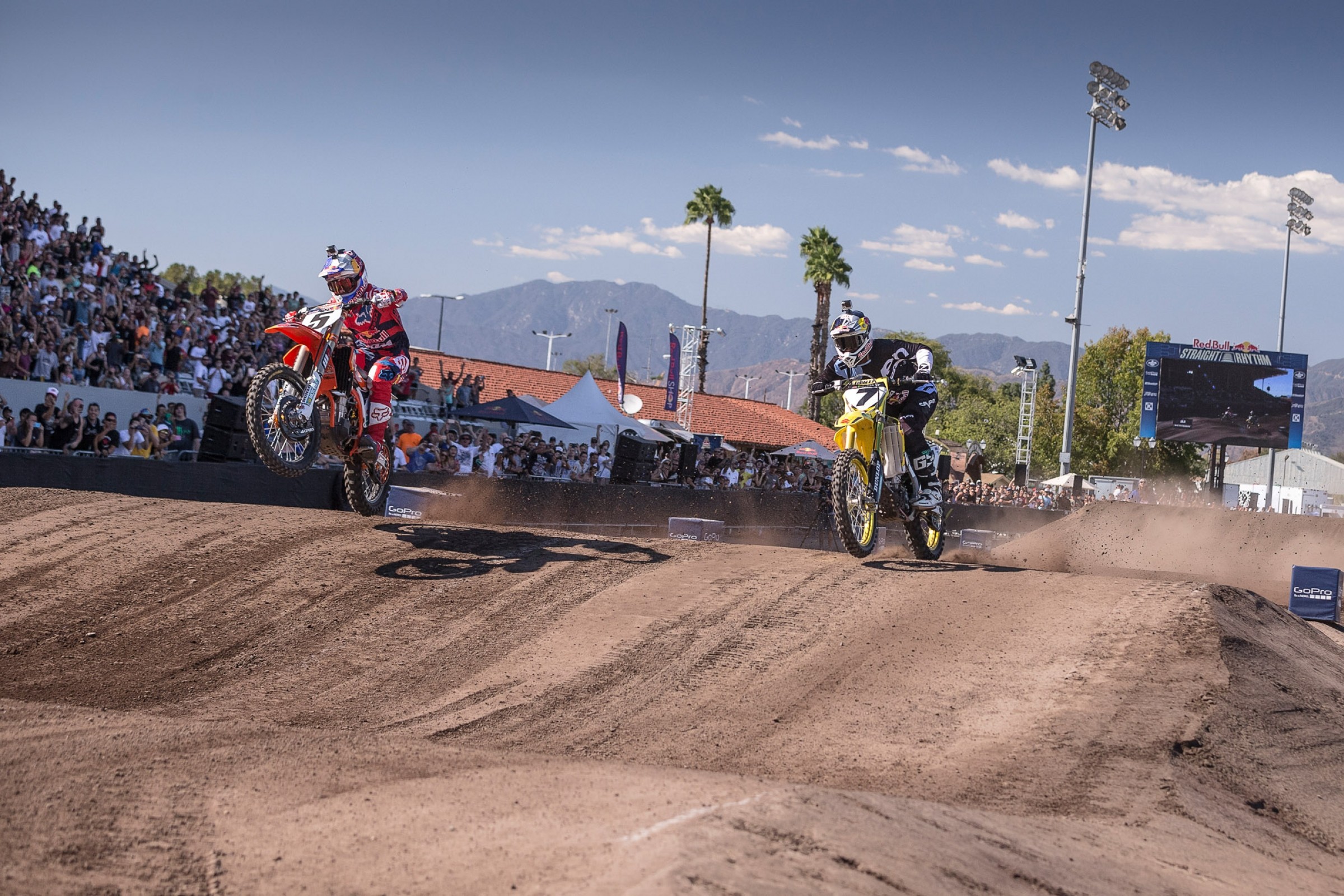 It so often seems like the best ideas start with a sketch on a napkin (including the drawing, as legend has it, of the first supercross track). In this case, the idea came with five pieces of graph paper taped together, with a drawing of an unwound supercross track. The drawings came from Red Bull Motorsports manager, Jeremy Malott, and would become Red Bull Straight Rhythm, the half-mile, zero-turn race that returns to Pomona, California for the third time next Saturday, October 22.

What’s in store for this year’s event? How do riders end up competing? We asked Malott about that yesterday.

Racer X: So the third year of Straight Rhythm is coming next weekend. I saw you in an airport restaurant at 5 a.m. about four years ago and you showed me this crude drawing of a straight supercross track. I really wondered if you could pull this off—and you actually did!
Jeremy Malott: Yeah that’s when I showed you five pieces of paper taped together because the track was so long. Maybe that wasn’t the best way to unveil it to someone in the media! But essentially, it’s Excitebike. We take out the gutter ball in bowling. We just take the most condensed, action-packed part of the race and run that by itself. There are plenty of races out there with multiple laps, and that’s great, but here we see who can be fastest in a straight line over a half-mile track. In the Olympics, the most popular event is the 100-meter sprint. It’s high action and it’s easily digestible, and hopefully the guy with the most talent wins.

And since it’s pretty new, we still don’t entirely know who could be a surprise in this event.
Yeah, and to take it a step further, one of the goals was to eliminate some of the advantages some riders have. A good trainer like Aldon Baker is negated in this event because fitness isn’t a factor. Having a great team of technicians isn’t as important because you’re not trying to set up a bike for whoops, turns, and jumps at the same time. We had the idea that any rider can just turn the clickers a little bit stiffer and go fast in a straight line and not get tired. With all of those things being equal, who is really the most skilled?

When you first brought this up, you were referencing this gnarly LCQ battle at Daytona between two privateers.
Yeah, I think it was Weston Peick and Bobby Kiniry, and you saw it on the front stretch at Daytona. It was two guys battling for the final transfer to the main, and there weren’t any turns left. No one could saw at the other guy’s front wheel, no one could take anyone out, they were just wide open and scrubbing to try to get to the finish first. That was really a condensed version of what we’re doing here. It was up to them to be the best in that given race. No one gets taken out, no one gets stuffed. One of the things we’ve discovered is that after a run at Straight Rhythm, the guys are high fiving each other, because you eliminate any chance of someone block passing or taking someone out. In other match events, it just becomes a game of cat and mouse in the corners, and that’s not very fun to watch. Here, if you beat me, you were better. So it’s just high fives and congratulations after the run, and they move on.

Moving to a night show this year. Is that part of some grand vision for this all along, or is this just something you wanted to try?
Yeah I think everything looks just a little shinier under the lights. It’s just part of the evolution of the event—last year we had an elevated start. We’re just trying to give it more polish, overall.

But this doesn’t mean you’re going to take portable lights and bring them to the middle of a city and do it downtown somewhere?
Well, that’s another idea behind this event. Every motocross race is at a motocross track, or something close to it. Here, you need a footprint that’s 25 feet wide and 2500 feet long. You could travel and put that footprint almost anywhere. You could do it on city streets. That might be a place for it in the future!

Okay! So big buzz this year, you’re allowing an electric bike to race in the 250 class. This could either be a great thing or a terrible thing, but you’re going to try it.
This is the event where you’re going to see stuff you won’t see anywhere else. We want to have a good event and a credible event, but we want to have some fun. The electric bike is the next evolution of a motorcycle. Everyone remembers Doug Henry winning a supercross in 1997 on a four stroke. I’m not saying this will be that moment for the electric bike, but it’s a step in that direction. If you can see an electric bike race against a four-stroke—and maybe even a two-stroke—it just allows the conversation for this event to be that much different than anything else. We don’t have homologation rules. You can ride a bike that’s five years old, or in the case of Travis Pastrana two years ago, a hybrid bike with a 500cc engine in a modern frame—the RM-Zilla.

But the idea of this race—with battery range not being an issue, stopping and turning not a factor—an electric bike can produce instant power. It could be perfect for this race. And you’ve told me you’re okay with that.
Yeah it’s exciting! Watching Josh Hill on that bike at a track like this, that video blew up. We all know sooner or later this electric bike technology is going to work out. It just worked out that the timing was right for the Alta to debut at Red Bull Straight Rhythm. It already had some success at an EnduroCross. I think we’re all waiting to see what would happen. Josh Hill is an incredible rider. Yeah he’s been retired, but I really think he can give someone a run for their money on this bike.

But he will have a Monster Energy helmet on! You won’t have armed guards making sure he doesn’t come through the gate?
[Laughs] No. We’re so excited to have him at this event. We want all the best riders at this event. We invited Eli Tomac, we’ve invited all the Rockstar Husqvarna riders. Whether they show up or not is up to them, but we’ve made it a point to invite everyone. We invited Tim Gajser. If you race every single round in this, you race for about eight minutes. With a little bit of practice, anyone could roll off the couch and have a good time. We’re not trying to make a 19th supercross or a 15th outdoor national. We just want people to come out and have a good time. Plus, the race airs live on Red Bull TV, which you can watch in any country, anywhere, and it will air on TV on NBC. Maybe this race exposes the sport to a new audience, because they can literally watch each run by itself within a minute. Maybe that draws them in a bit, and they want to start watching more of the other races.

And there is a purse. If they race, you’ll make it worth their eight minutes.
Yeah, it’s probably the best bang for the buck as far as effort and pay. And also, we hold it here in California, so everyone gets to sleep in their own bed.

There’s so much talk about adding off-season events. Everyone wonders why riders race some races and not others. So, here, you do invite everyone. But you don’t have this set as the last page in your rider’s contact? It doesn’t say, “Oh by the way, we sponsor you so you have to race Straight Rhythm?”
No, this is an optional event. This is for the sport. We’re trying to help grow it. We don’t think adding an extra traditional supercross or motocross race would do that. Maybe this lets people see something they don’t see anywhere else. We reached out to Ryan Villopoto! This is the kind of race where someone like him could still compete. I truly believe Kevin Windham could crush it at this event. We invited Grant Langston and Ryan Morias the first year.

That’s right! GL rode it the first year, and he didn’t embarrass himself.
Yeah, he looked good! Some of these guys, literally a few days at the test track to knock the rust off, and they could be as competitive as anyone else for 45 seconds.

You announced half the field last week?
Yes, we launched half the field last week, and we’ll announce the other half next week. Still working on getting James Stewart a bike out there for fun, maybe on a surprise machine so he can give the fans a thrill. Ken Roczen has a prior engagement that weekend but hopefully he can be there on his new Honda.

And you’re saying there might be some two-strokes out there?
Yeah a potential surprise race between two very distinct motocross characters, and maybe against a very high profile freestyle rider who used to race, as well. We’ll see if that comes together, but I think you’re going to see a very entertaining show at intermission.

This event is like two things in one. At the very top it’s very competitive, I know last year everyone was wondering what would happen when Dungey lined up against Stewart, or Stewart lined up against Roczen. That’s serious stuff. But there’s also that element of, “Ah whatever, let’s throw some stuff out there and see what happens!”
Yeah, this is an off-season event. It’s not a points paying series, it’s just a fun thing to do for the fans, and that’s all that really matters. Kevin Kelly said it the best, he was announcing last year and said, “This is the best last lap of racing you’ll ever see.” We’re keeping it close and condensed. We take out the variables, and let the best man win.