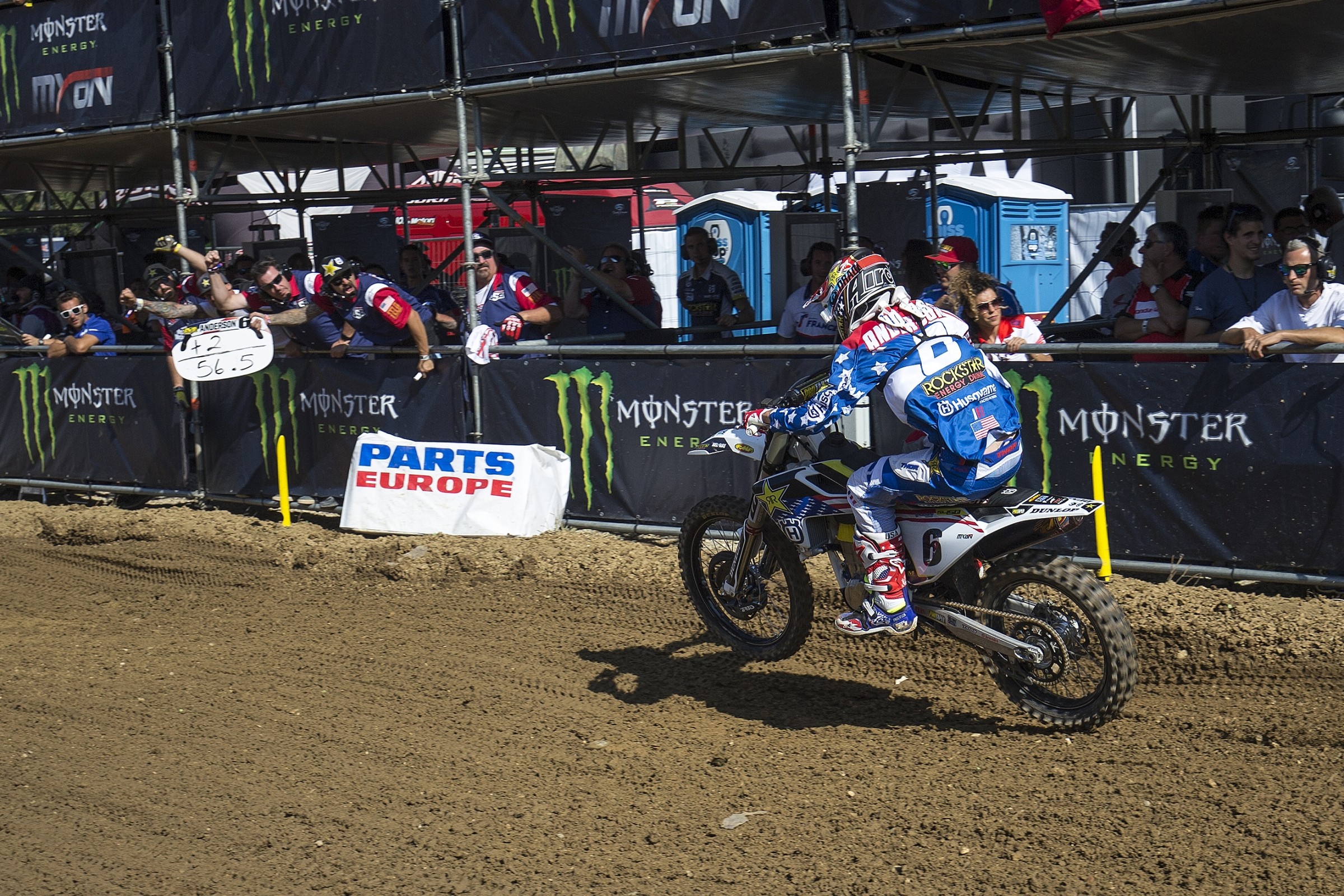 Behind the efforts of Romain Febvre, Gautier Paulin, and MXoN rookie Benoit Paturel, Team France won a third consecutive Motocross of Nations over the weekend in Italy. But it wasn’t their most dominant performance. In fact, the 29 points scored by France on Sunday was the highest score from a winning team in the history of the event. Scoring has changed a lot in the 70 years of the event—even running one moto formats in 2002 and 2003, but the current format has been around since 1996. Perhaps most tellingly, France’s 29 point total this year is more than double what they scored en route to a victory last year, when the team scored just 14 points.

Check out the chart below for every winning Nations’ score since 1990.

As we reported on Sunday, Team USA’s Jason Anderson will make a complete recovery after a bizarre incident following his win in Race 2. While celebrating the win, Anderson rolled the finish line jump and was landed on by a lapped rider. Anderson received medical attention at the track and was then taken to a local hospital for a concussion evaluation.

On Monday, Anderson released a message on his personal Instagram, writing that he would be fine, but that he did suffer a broken foot in his crash on Saturday. This will rule him out for the upcoming Monster Energy SMX Riders’ and Manufacturers’ Cup set to take place on October 8 in Germany and probably the Monster Energy Cup on October 15. Anderson was selected to represent Husqvarna alongside Zach Osborne and Max Nagl.

Just wanna thank you all for the kind words! This weekend did not go team USA way but we never gave up and thanks to @cooperwebb2 and @alexmartin_26 for riding their asses off!

As of now all I have is a broken foot which I suffered on Saturday but I'll heal up and see you all at A1!

Nagl’s status for the SMX Cup may also be doubtful. In Saturday’s qualifying race, Nagl, representing Team Germany, went down hard and was unable to compete in Sunday’s races. Germany, which won the event in 2012 with Nagl, Ken Roczen, and Marcus Schiffer, missed out on the A-Final and finished 22nd. In a Husqvarna press release, Nagl said he was disappointed he wasn’t able to race Sunday, but that he avoided major injury.

“Wrapping up the 2016 MXGP season with third overall I was really looking forward to this year’s Motocross of Nations. Unfortunately, my run was cut short after a crash in Saturday’s qualifying moto. It all happened fast. I was coming through the pack and just before the finish line I chose a different line, hit a muddy spot and crashed. The pain in my back was so intense we decided to sit out the rest of the event. The pressure from the championship was off so I knew I could battle for race wins here at the Nations. To be honest I’m a bit disappointed I didn’t manage to show what I could do on Sunday. I’m also sorry I couldn’t battle for Team Germany. Luckily we avoided any major injury so soon I’ll be able to get back to racing and my preparations for 2017.”

For a 16th consecutive year, Tanel Leok represented the small European nation of Estonia. Leok dropped down to the 250 for the event. On the broadcast, commentator Paul Malin said it was the first time Leok had raced the MX2 Class at the event since 2001—when he rode a 125! Leok was great again, finishing sixth overall in MX2, which helped Estonia to a sixth-straight top 10 finish.

Although he was banged up from his crash in qualifying on Saturday, Tony Cairoli put in a great performance at his home race on Sunday. And while he lost both his races to the younger Romain Febvre and Jeffrey Herlings, Cairoli still won the MXGP overall with 2-2 scores. “I hit my head and my back and my shoulder and my leg,” he said. “It was pretty big hit. I’m getting older so it’s difficult to recover. But actually I rode good; I rode well. The pace was there.”

As for racing in front of thousands of fans, Cairoli admitted it is difficult racing at home: “It’s very difficult. I had a lot of media events and I couldn’t walk the track. Normally I always walk the track and see lines and this and that. I just stay in the motorhome all the time and run to the bike when people screaming at me. “Oh, you don’t stop for us!” and this. It’s tough for me. I give a lot of time to the fans always but it’s very difficult on this kind of event to focus on the race also.”

Yes, Jeffrey Herlings has competed at the Motocross of Nations in the big class prior to Sunday. He raced the 350 in 2011 and 2012, before missing the last three years with injury. And yes, he’s raced the 450 in the Dutch Championship. But last weekend was Herlings’ big debut on the 450. And, wow, was he impressive. In Race 2, Herlings pressured Jason Anderson for the lead before falling and finishing second. In Race 3, he took the holeshot and held off eight-time world champion Cairoli. Herlings told our Adam Wheeler that leading on the bigger bike felt different.

“It did feel different. I know if I holeshot on a 250 then it will take a couple of laps but then nobody would be close to me anymore. This time Tony was there and stayed in distance. It is something I will have to get used to for next year and that there will not be many rounds where I can just pull away. Also that it won’t be possible to win each race. In MXGP if it is possible to win a couple then that is already a big thing. I think it will be a huge change [for me] going to the big bikes.”

You’ll be hard pressed to find a rider that impressed more than Canada’s Kaven Benoit. He even got high praise from the eight-time world champion Tony Cairoli. “Amazing starter [Kaven Benoit], I have to say. I hope Canada also can do better next year than this year.”

Benoit ran up front in the qualifying race on Saturday, eventually finishing 10th. He was even better on Sunday, finishing sixth overall in MXGP with 8-12 moto scores. His performance helped Canada to 10th overall, its best finish in 12 years. “I belonged up there I think and I had to tell myself that I belong up there,” he said. “For sure there are lots of people that are probably asking themselves who I was. That’s cool. It’s a great feeling. Looking forward for next year. Hopefully I’ll be able to make it again and improve our results.”

A week ago, Aussie, Dean Ferris, was battling Justin Brayton for a win at the opener of the Australian Supercross Championship. This time the former GP regular (and one-time Red Bull KTM factory rider over here in the U.S. Do you remember that?) was back into motocross mode and riding well at Maggiora, taking fifth in moto two and fourth overall in the Open Class. Teammate Todd Waters went 7-14 for eighth overall in MXGP. Unfortunately, young Mitchell Evans didn’t crack the top 30 in either of his motos in MX2, which pushed the Australians back to eighth overall.