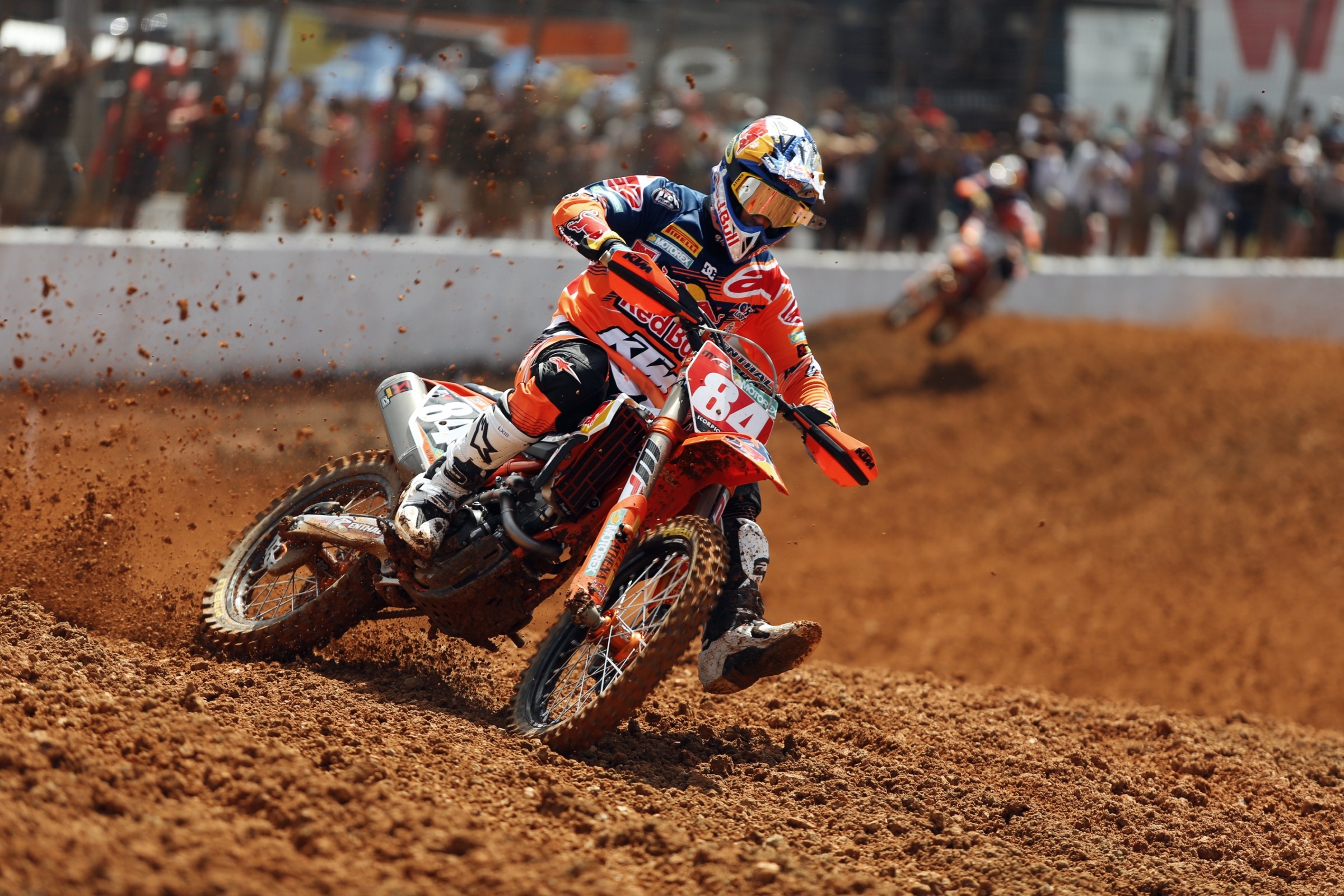 Stay tuned here for coverage of the USGP in Charlotte, North Carolina.

The European journalists we talked to said MXGP points leader Tim Gajser has been riding a little more conservatively since the championship began to fall into his sights. With the title wrapped by moto 1, he was free to let it hang out in moto 2. He did, but ultimately Eli Tomac won the much-anticipated showdown.

Gajser started the race out front while Tomac was about fifth, and then soon fourth. Tomac made moves on Evgeny Bobryshev and Glenn Coldenhoff to take over second, which was enough to give him the overall. But Tomac wanted more and kept digging for Gajser, who then washed the front end and crashed, allowing Tomac to take the lead. From there, it looked much like moto 1, as Tomac continued to pull away.

Not much else to say here, Tomac the winner, Gajser the new MXGP Champion.

This is one that will be remembered for a long time.

When the gate dropped, two American riders on Kawasakis led the field through the first turn, just like in moto 1. However, this time Austin Forkner was not joined by Adam Cianciarulo (out for this moto with an apparent shoulder injury) but Darian Sanayei, who is making his MX2 debut after a solid season in Europe's EMX250 class. Sanayei even led briefly, but Forkner quickly got him and took off. As he built a lead, he embarked on another chapter of the story we've already been reading: this kid is really, really good.

Meanwhile first moto winner Jeffrey Herlings soon moved into second and it appeared the overall win was set. Herlings could go 1-2 to win it, because Cooper Webb, runner up in moto 1, started just about dead last. Seriously. About last into turn one after getting his bars hooked with other riders. The field here was only about half of a typical AMA National with only about 20 riders, but on a track that was so hard to  make passes on, Webb's chances looked to be dashed.

Then with about 10 minutes to go, Webb went nuts.

Forkner and Herlings started to drop off of their best lap times just a bit, while Webb was able to maintain his. Then Webb got Herlings into his sights and went next level, running a 1:49 lap while Forkner and Herlings logged 1:51s. Webb was going to the front and the crowd knew it, and they began pulling for their local product harder than ever. Soon, he was on Herling's fender, then he leaped past to take second. That actually, temporarily, put the overall in Forkner's hands, but Webb wasn't done, and soon ran down the rookie to take the lead. It was a spectacular charge, and one that netted him the overall win via 2-1 scores in his last race on a 250.

Late in the race, Forkner admitted he was spent from sprinting so hard early, and Herlings got right onto him with a lap to go. Herlings made a move, Forkner responded, and just held off the new MX2 World Champion for second in the moto. Herling's 1-3 was enough to edge Forkner for second overall.

Post race, all three riders were candid and respectful to each other, with Webb saying Herlings was the first person to pass him and leave him in a long time, and then Herlings saying he was shocked how fast and intense the Americans are at the beginning of the races. Herlings also said the seriousness in the Americans approach to racing and training is something he could learn from, while Webb said he learns a lot about race craft by watching the European riders. It was just one big compliment fest, with true respect shown by both sides, and each one getting a moto win.

But that last one is a race the North Carolina faithful will forever hold in high regard.

The fans had something to cheer again at the start of this one, as Justin Barcia and Eli Tomac raced through the big first turn together at the front. Barcia secured the lead, but Tomac got by before the end of the first lap and started checking out. On a track that didn't offer much in a way of separation, Tomac found a way to separate himself in a big way.

Barcia hung tough in second ahead of fellow Yamaha rider Jeremy Van Horebeek. Van Horebeek stayed close to Barcia throughout but never got close enough to make a serious attack. Behind them came a charging group, with Tim Gajser moving to fourth while also trying to wrap up the season championship, and Clement DeSalle, Glen Coldenhoff, Romain Febvre and Max Nagl all in the hunt, too. This group was close, but then Febvre had a crash and lost a few spots.

Tomac was gone and sailed to the moto win. Gajser's fourth was enough to clinch the MXGP title, as second-ranked Tony Cairoli struggled to 13th.

Second motos, under the lights, await.

The gate dropped for the first-ever USGP in Charlotte and the fans got exactly what they wanted: two Americans out front. Austin Forkner and Adam Cianciarulo came around The Dirt Track's banked turn side-by-side, but then Cianciarulo lost the front, then caught and highsided badly. He went down, and then the worst of it: trackside bystanders say it looked like Cianciarulo's shoulder was hanging down and of socket. Considering he previous shoulder injuries, that's nearly the worst case scenario for Adam.

The crowd still had plenty to cheer for though as homestate hero Cooper Webb was soon into second behind Forkner. As they crossed the finish out front at the end of lap one, the fans were screaming and saluting...but MX2 points leader and dominator Jeffrey Herlings was lurking in third.

The atmosphere and facility at this event is good, but the track just isn't offering a lot of places to gain or lose time. Forkner maintained a lead, Webb stayed behind in second, Herlings third, lap after lap, until past the halfway point. At times Herlings closed on Webb, then Webb would pull back out. Forkner was never under any real pressure and it looked possible he could win it. Then rookie lost the front end in a corner and went down. Webb was using the same line and had nowhere to go, he got tangled momentarily, and Herlings took advantage on an outside line to sweep around. Webb and Herlings were now side-by-side but Herlings got the better of it around the flat track turn, and then put a solid gap on from there. A few laps later, Webb began to creep back up, but he was never able to get any real pressure back on Herlings. Forkner recovered for third.

At the finish, Herlings not only won the moto, but also clinched the MX2 World Championship since second-place ranked Jeremy Seewer ended up tenth. It was an emotional celebration for Herlings, who had missed the last two titles after suffering injuries after opening up big points leads. The win over Webb probably made it that much sweeter.

Good ride for Thomas Covington, the American ex-pat, in fourth, and another American, Darian Sanayei, made his MX2 debut with seventh. Max Anstie was very fast but also fell on the first lap and came back to sixth.

The talk is over, now it's time for racing at the first ever FIM World MX Grand Prix at The Dirt Track at Charlotte Motorspeedway in North Carolina. Quite incredibly, massive, massive rain on Thursday and Friday have barely impacted the track at all, as practice today began under sunny skies--and featured a dry track! It's one of the most remarkable "mud race-not a mud race" turnarounds we've ever seen.

The track is still plenty unique, though, as no one has ever built a motocross track of this scale in the confines of a dirt oval--along with a few sections outside of the oval to build lap times. The track is smooth and fast, absolutely wide open, and there are few areas to gain or lose a ton of time. It will come down to starts and a lack of mistakes.

Here are qualifying times, we'll have more here as the motos are set to begin.

The kid does it again! Austin Forkner fastest in MX2.