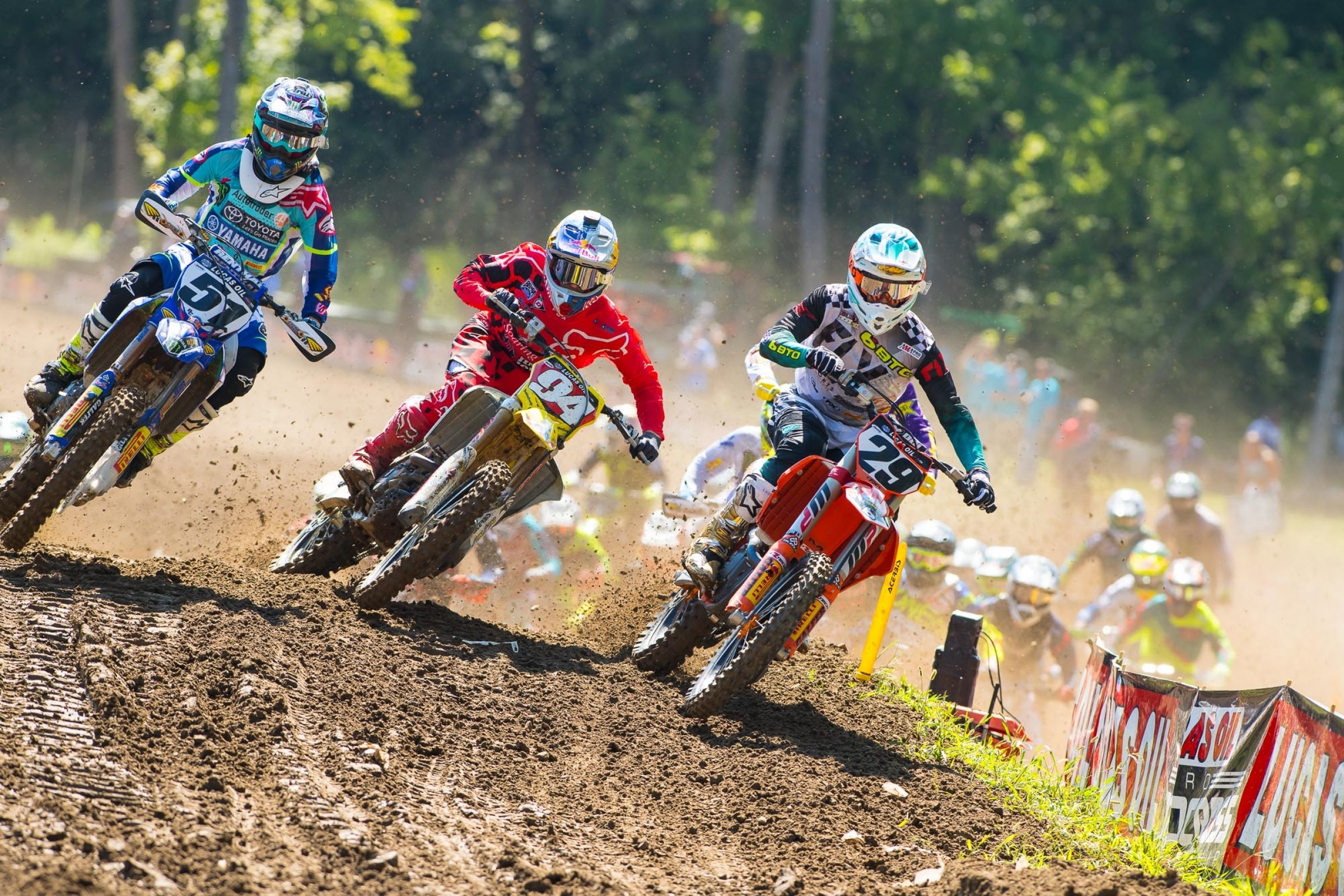 Ken Roczen certainly didn’t have anything left to prove as the Lucas Oil Pro Motocross Championship headed to Ironman Raceway in Crawfordsville, Indiana, for the 2016 season finale. He’d already clinched a second 450 championship. He’d already won 18 (of 22) motos. He’d already had eight 1-1 performances. He’d already led 294 laps. He’d… well, he’d done it all. Yet, there was Roczen, up front both motos, racing to a ninth 1-1 day.

What motivated him? It turns out, motivation was a little hard to come by this week.

“Honestly, it was really tough this whole week. I tried to tell myself, ‘Dude, it’s not over, we have another race.’ But at the same time things are wrapped up and I went a little into vacation mode almost,” the Soaring Eagle/Jimmy John’s/RCH Suzuki rider admitted at the post-race press conference. “I went out to the track and stuff and riding and kind of dragged around. I took it easy this week. I was on the bike, obviously, just to keep the feeling. I knew for a fact when I was going to show up here my mental game would be on point. I just went out and rode and just had fun.”

Roczen will now go into real vacation mode, as his next scheduled race isn’t until the Monster Energy Cup in October. Most signs point to Roczen being with Honda HRC at that time, but when asked if this was his last race with Suzuki, Roczen just said he would be at the Monster Energy Cup.

AutoTrader.com/Monster Energy/JGR Yamaha’s Justin Barcia had arguably his most impressive afternoon of the season. He kept Roczen honest for a number of laps in the first moto and cruised to second. In the second moto, he built a nineteen second lead over Eli Tomac only to see it nearly wash away late in the race after he went down in a corner. After getting his bike restarted, Barcia regrouped, and built a six second lead on Tomac at the end. What’s been the difference lately for BamBam?

“I went back to Florida and got a local guy down there to do some video and really studied the bike, and as much as I could, I went back to Charlotte (JGR headquarters) and said this is what it’s doing, and this is what I need it to do,” said Barcia in the post-race press conference. “I try to communicate as much as I can, but sometimes it’s hard to communicate. But, yeah, we started figuring it out the last couple races.”

Barcia ended the season strong going 3-3-2-2 over the last four rounds. He will for sure race the Charlotte GP next weekend but said he wasn’t sure about the GP at Glen Helen. We’ll have more with Barcia early next week about his season, the Motocross of Nations and more.

As for Tomac, he was certainly fast all day, but starts held him back again. He was sixth after the first lap in both motos, which isn’t terrible, but when Roczen is up front it’s hard to make up that much ground. He made two incredible charges in both motos to get Marvin Musquin for third and finished the day third overall.

“It was a long day for sure,” Tomac said. “It was a tough track, the lines in the ruts were changing every lap and they were deep—you had to keep your feet on the pegs.”

Musquin ended the season with a 4-4 day, which was easily good enough to clinch third in points. The 450 rookie bested Barcia by 41 points.

Jason Anderson was back in action for the first time since High Point due to a collarbone injury. Anderson will represent the United States at the Motocross of Nations later this year and needed some gate time. Anderson didn’t miss much of a beat, going 5-5 for fifth overall.

We’re sure Steve Matthes will go on and on and on and on all week about Canadian Kaven Benoit. But it’s actually well-deserved. Benoit finished eleventh overall in his first Lucas Oil Pro Motocross action of the year.

We'll have more on Andrew Short's last race of his career today, but it was damn cool seeing him pull the holeshot in the second moto before a mechanical took him out of the race.

Austin Forkner ended a brilliant rookie campaign the best way possible—winning his first career overall. The Missouri native finished fourth overall in points, won two motos and captured an additional five moto podiums. Oh, and he led 52 laps on the season, fourth most in the class behind only Cooper Webb, Alex Martin and Joey Savatgy.

Forkner has showed poise well beyond his years all season, and incredible consistency for a rookie. He finished outside the top ten in just three motos and averaged a 6.4 finish through 24 motos.

There is something about the state of Indiana and Aaron Plessinger. Last year, he collected his first career moto win—and overall—at Ironman. Earlier this year, he won his first career supercross in Indianapolis, and today, he won a moto for the first time since Ironman last year.

“I don’t know,” Plessinger, who grew up in nearby Ohio, said after the race. “I’ve always liked Indiana, and I’ll continue to like it.”

The win was a bit surprising, considering Plessinger struggled to an eighth in the first moto. But he said he found the right mindset going into the second moto, which helped.

“I just went back to the truck and chilled out,” he said “I didn’t dwell on it too long. I just picked myself up and had fun.”

There wasn’t much for Cooper Webb to fight for today. He’d already clinched the 250 title a round early last week at Budds Creek. It didn’t stop him from charging back from three crashes on the day (two in moto one, one in moto two) to capture third overall on the day.

“I was obviously still pushing,” Webb said when asked what motived him today despite clinching the title. “It was a pressure free day for me, so I wanted to try to win. Unfortunately I had a day filled with crashes.”

The Star Racing Yamaha trio of Plessinger, Webb and Alex Martin actually tied on points (38) for second behind Forkner, with Martin catching the short-end with a fourth in the second moto (the worst of the group). Mitchell Harrison made it four Star riders in the top seven, behind a seasons-best sixth in moto two.

For the third time in the last three races, former points leader Joey Savatgy wasn’t able to finish the second moto. Since Unadilla, Savatgy has gone 2-3-2 in the first motos, and 32-34-34 in the second motos. Despite the late slide, Savatgy still held on for third in points, just seven clear of his rookie teammate.

Adam Cianciarulo has certainly had his share of troubles in his short pro career. A bout with salmonella, shoulder injuries and a wrist injury have limited him to just 32 of 77 scheduled races (or 41.5 percent) in his SX and MX career. Today, he completed the first full series in his pro career. He finished fifth overall on the day and captured eighth in points.