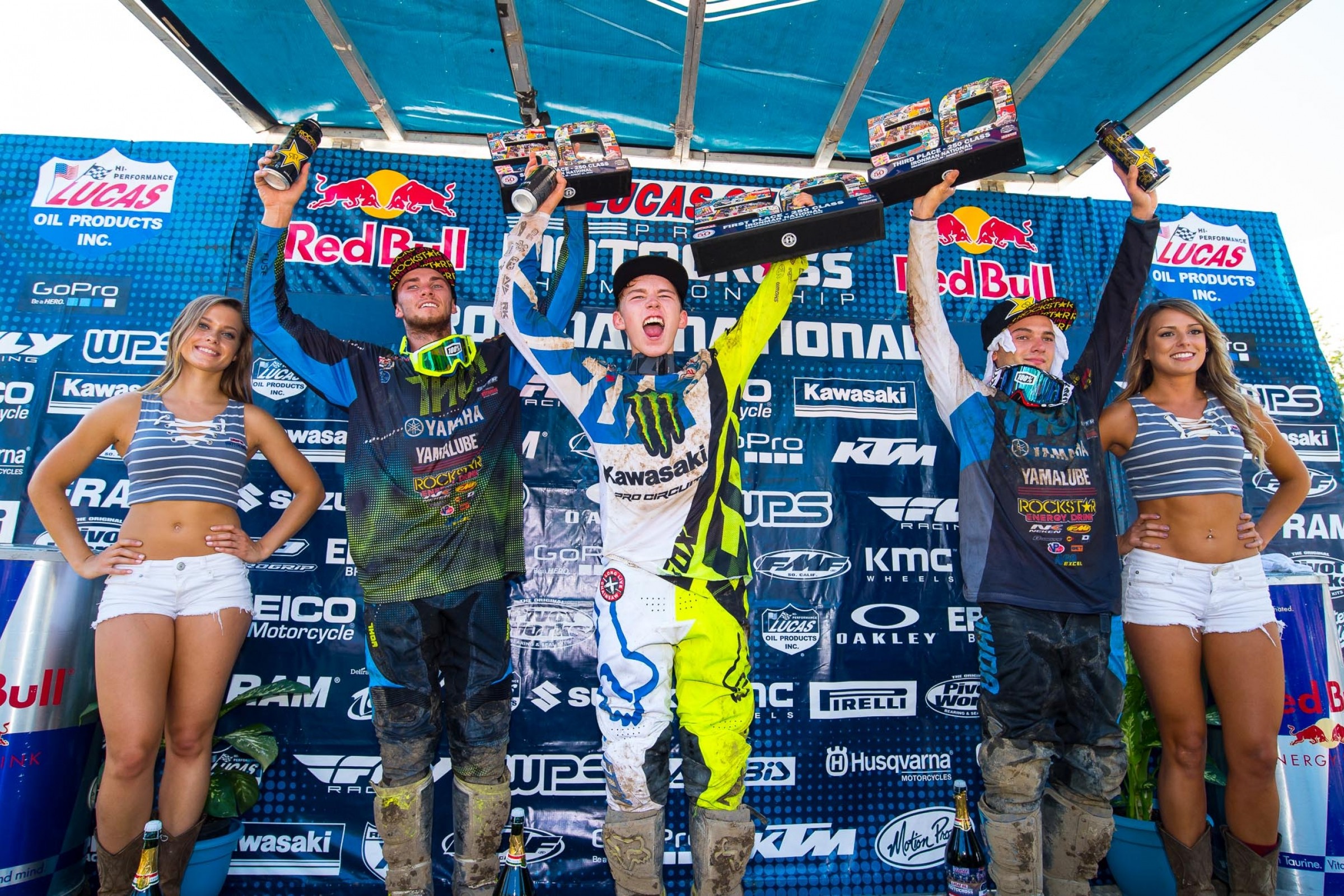 Welcome to the Motorcycle Superstore Race Day Feed where we will be updating you with moto by moto recaps, results and more from Round 12 of Lucas Oil Pro Motocross at Ironman Raceway.

Up front it was a repeat of the first moto with Ken Roczen taking the early lead over Justin Barcia. This time, Roczen built an early lead—nearly 11 seconds by lap 5—and ran away to clinch another 1-1 afternoon on the 2016 season.

Barcia saw a near nineteen second gap over Eli Tomac slip away late in the race when he went down in a corner. Eventually he was able to get the bike restarted before Tomac erased the entire lead, but he still had Tomac on his tail. In arguably his best ride of the season, Barcia turned it back up and held Tomac off by six seconds.

The 2016 Lucas Oil Pro Motocross Championship has ended for the 250 Class, but it certainly left us plenty to talk about.

Monster Energy/Pro Circuit Kawasaki’s Austin Forkner took the holeshot in the second moto over Yamalube/Star Racing Yamaha teammates Cooper Webb and Alex Martin. The moto one winner wasn’t able to run away from the field like he did in the first moto, but he looked solid for a number of laps as Plessinger applied a ton of pressure.

Plessinger again pulled close as the two crossed the finish line for the ninth lap. But Forkner wouldn’t lead another lap. In the same spot he made a mistake in the first moto that forced him off the track, Forkner went down again, tossing away the lead. He was able to regroup and get up in second, but a lap later he lost that spot to Webb.

There was still reason to celebrate if you’re Forkner. With a third place finish he clinched his first career overall win in Lucas Oil Pro Motocross.

After getting the lead, Plessinger ran away to win his second career moto—first since Ironman last year—behind a more than twelve second lead.

Mitchell Harrison made it four Star Racing riders in the top six, ahead of Martin Davalos, Justin Hill, Arnaud Tonus, who came back from an early crash, and RJ Hampshire.

- Not sure what happened to Zach Osborne, but he was 38th after the first lap. He came back to finish 16th. We’ll provide an update as more information is known.

It didn’t matter much to Ken Roczen that he’d already clinched the 450 championship. The two-time 450MX champion once again led start to finish in the first 450 moto at Ironman. Justin Barcia kept him honest for a few laps, but Roczen was too strong and rode to a more than five second win. (He did stretch his lead to more than ten at points in the moto.)

The real battle of the moto was for third between Marvin Musquin and Eli Tomac. Musquin held the spot for the opening seven laps before Tomac used a huge scrub up the hill to put the pressure on Musquin and soon took over the position.

Tomac made things interesting when he went down a few laps later. Musquin retook third until two laps to go when Tomac once again charged back and passed the Red Bull KTM rider. This time he wouldn’t relinquish the spot.

Barcia was never challenged for second and finished 6.1 seconds behind Roczen.

- Now a full-time GNCC racer, Ryan Sipes, in his first appearance on the circuit this year, finished nineteenth.

Austin Forkner is legit, folks. If you didn’t already know that after the rookie season the Monster Energy/Pro Circuit Kawasaki rider has already had, then the first moto at Ironman certainly changed your view.

Forkner grabbed the holeshot in the first moto, on a track that is still a bit “soupy” after rain leading up to the event, and, really, the race was over from there. Forkner built an eight second lead by lap 3 and turned it into 15.2 by lap 5 and 28 seconds by checkers. Impressive riding from the rookie, who notched the second moto win of his young career.

If anyone was going to challenge Forkner it was going to be Cooper Webb, and early on, the title winner was in great position to do so. But he stalled his bike in a corner and fell outside the top ten. He would come back to grab fourth late in the race, but he went down hard with a few laps to go while challenging Alex Martin for third. He would finish fifth.

“The track is brutal right now,” said Martin. “It’s pretty crazy out there.”

- Conditions seemed like a perfect match for last year’s Ironman winner Aaron Plessinger, but the Yamalube/Star Racing rider could never get anything going and finished eighth.

- RJ Hampshire, who had to qualify out of the LCQ, finished fourteenth.

- Chris Alldredge also qualified out of the LCQ. He finished eighteenth.

Benny Bloss put down a heater late in the second session to capture the top time, but it wasn’t good enough to beat out Justin Barcia’s 2:32.824 from session one. Bloss’ 2:34.395 was nearly two seconds better than his time in the first session and was good enough for third overall behind Barcia and teammate Phil Nicoletti.

First motos begin at 1:00 p.m. ET on MAVTV and Promotocross.com.

Whelp, we were wrong. The first practice times did in fact hold up.

In 250s, Cooper Webb will have the first gate pick after a 2:30.304, which was more than six seconds faster than his second session. Austin Forkner was fastest in the session with a 2:35.460. That time was just under four seconds off his first session of a 2:31.524.

The surprise of the session comes from Canadian Dylan Wright. Riding in Group B, Wright set the third fastest time overall with a 2:31.540 in his first session. Mitchell Oldenburg, Adam Cianciarulo, Daniel Herrlein, Aaron Plessinger, Arnaud Tonus, Joey Savatgy and Alex Martin round out the top ten.

The good news: the sun is finally out. The bad news: it didn’t come out quick enough to dry out the track for the first set of practices. The track will certainly come around, so don’t expected these times to hold up.

Justin Barica is probably hoping conditions stay the same, as he set the fastest time in the first practice with a 2:32.824 over teammate Phil Nicoletti (2:33.797). In his first race back since High Point, Jason Anderson was third fastest followed by Eli Tomac, Ken Roczen and Benny Bloss.

Cooper Webb topped rookie Austin Forkner in the first 250 session. Webb’s 2:30.304 was the fastest time of the first session (450 and 250) by more than two seconds! Mitchell Oldenburg, Adam Cianciarulo and Aaron Plessinger rounded out the top five.

Ironman Raceway in Crawfordsville, Indiana, will serve as the final round of the Lucas Oil Pro Motocross Championship. While the facility is new on the Pro Motocross circuit (today will be the third race ever held here) it’s well known in GNCC circles, hosting a round since 1995. The facility sits on The Shaver Family Farm and it’s been estimated that 3,000 truckloads of organic material mix and sand were used in order to build the facility, which hosted its first Pro Motocross event in 2014.

As Jason Thomas pointed out in his Staging Area column, we may see similar conditions as 2015, due to heavy rains that have been in the area all week. It has rained briefly this morning as well, but rain is expected to hold off this afternoon.

Luckily for Ken Roczen and Cooper Webb, the weather will have zero affect on their title chances, as both clinched a round early last weekend at Budds Creek. Roczen caused a stir earlier this week, posting on Instagram that he wanted to RM 250 this weekend. Unfortunately, that won’t happen due to AMA rules. DC explained why in Racerhead.

Although both titles have been wrapped up, there is still plenty to watch for this weekend—starting with Andrew Short. Today will mark the final race in the professional career of Short, which started way back in 2000. Short made his pro debut more than fifteen years ago at Steel City Raceway, and has signified what it means to be a professional throughout his career. I think I speak for everyone in saying, damn fine career, Shorty!

Elsewhere, there are still plenty of points battles to be decided today. We outlined them earlier this week, but we’ll briefly review them here. Weston Peick and Fredrik Noren are locked in a tight battle for ninth. Peick is currently two up entering the weekend. (Note: Peick trails Brayton for ninth by three and Broc Tickle by one for tenth. Both Brayton and Tickle will miss the race due to injury.)

Benny Bloss is looking to secure fifth in points. The rookie trails the idle Christophe Pourcel by thirteen, but has company, as Phil Nicoletti is only three back.

Tenth in 250MX will be a tight battle as well, as Mitchell Oldenburg (ninth) enters with a two-point lead over Arnaud Tonus (tenth) with RJ Hampshire (eleventh) looking to break into the top ten. Hampshire trails Oldenburg by thirteen and Tonus by eleven entering the weekend.

Fantasy Alert: Jason Anderson is back for the first time since High Point due to a broken collarbone. Ryan Sipes, now a full-time GNCC racer, is racing the 450 Class today.