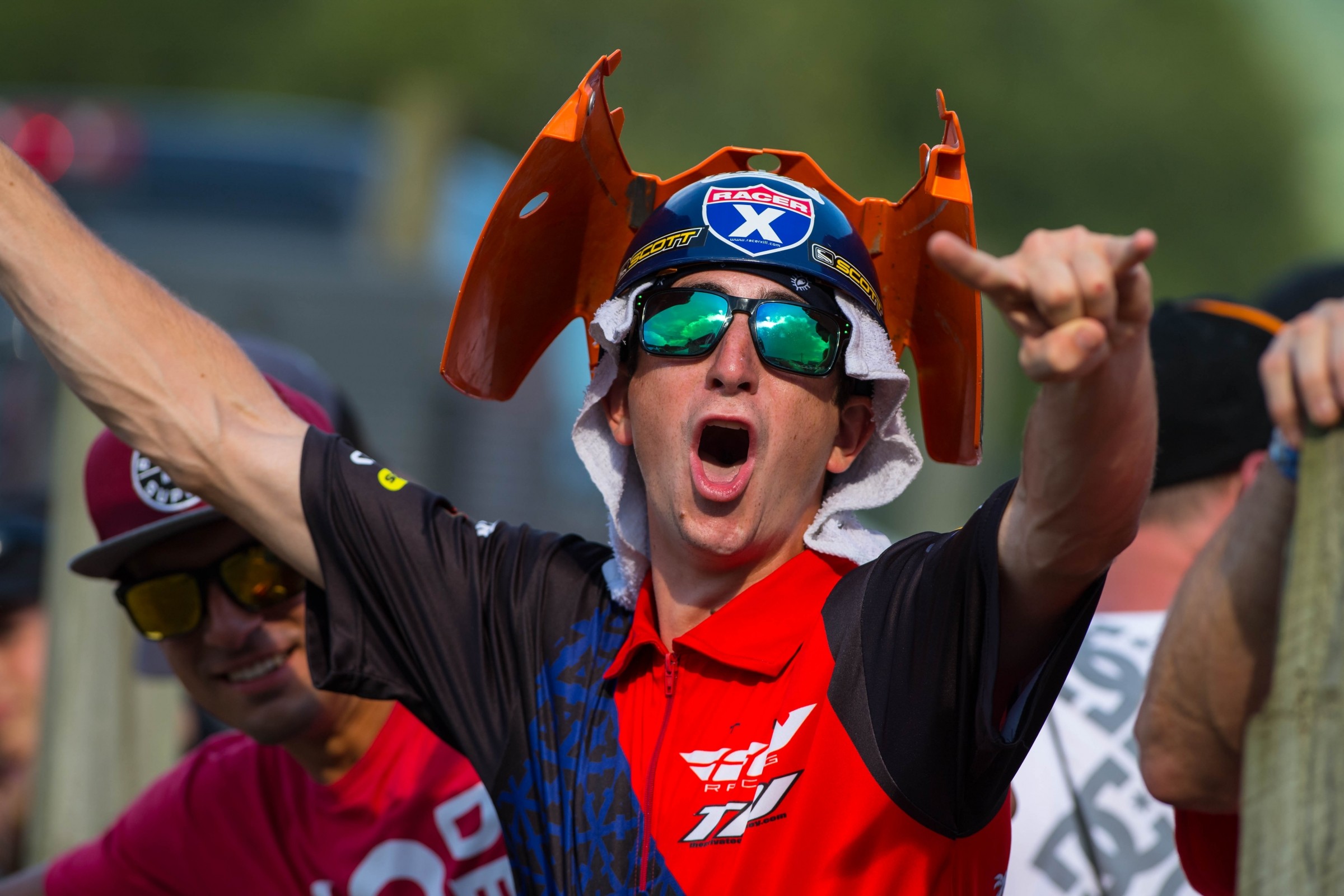 Is communication between teams and riders in MotoGP on the horizon? Last weekend at the Red Bull Ring in Austria, Dorna and the teams held initial discussions on the matter. The meeting discussed the option for teams to send very brief messages through a system on the dashboard of bikes. There is still a ton of details to work out, but it could be a possibility in the future. Moto Matters has more details, including how this is even possible.

The ability to pass messages between team and bike has been made possible thanks to the transponders currently being used in MotoGP. Those allow for a very limited and very short burst of communication as the bikes pass the timing loops at the track. Race Direction is currently using the system to pass signals to the dash in the case of a red flag, black flag or ride through penalty, but the system would also allow teams a limited ability to pass messages to the riders.

"It's at a very early stage," Technical Director Danny Aldridge told us at the Red Bull Ring in Austria. "Basically, teams could send very short messages to the dashboard. It would only be something like 'BOX'."

By the way, "Box" is the common word over F1 radios that means "pit." Read more.

The Peoria TT Is Amazing

The Peoria TT is the Daytona of AMA Pro Flat Track. Held on a 5/8-mile course, it’s the only track on the schedule that features one right hand turn (all other tracks feature four left hand turns) and one jump—a very intimidating jump at that. Henry Wiles, a former motocross racer and wrestler in Michigan, won the race last weekend for a twelfth consecutive time. He’s one win away from tying Chris Carr’s record of thirteen Peoria wins between 1986 and 2001. Brett Smith, who also contributes for Racer X Illustrated, profiled Wiles in the lead-up to the event for Revzilla. Also featured is more on why “the jump” is such a problem for the flat track guys.

The jump is an innocuous looking roller following turn two. Since today’s riders compete on 450cc motocross bikes in TT races, what’s the problem? The bikes are still set up for accelerating out of turns, not jumping. The suspension is shorter, the front wheel is smaller and since the jump is carved into a left hand turn, riders are landing at an angle and on the left wall of their tires, making for a very thin margin of error. And because the motors have 60 horsepower and some riders hit the jump around 70 mph, the crashes are ugly.

“Everybody has gone over that jump and had a moment with it. There’s no way to avoid it,” says Jared Mees the reigning AMA GNC champion and five-time runner up at Peoria (all to Wiles). Mees has never won a GNC TT race and the closest he’s come to winning Peoria was 2015 when he was 1.32 seconds behind at the line. Wiles and Mees lapped up to sixth place in the 18-rider field. Mees echoes Carr’s take on the jump being intimidating. “Most people will make a mistake and then hit the jump slower and slower and slower throughout the race.”

Read the full article here and check out highlights from last weekend’s race below.

BMX, which debuted at the 2008 Olympic Games in Beijing, takes place this week in Rio, and dang, the course looks fantastic. I must say, it does look pretty supercross-ey.

I also spotted this preview video below on Vurb this week.

Hey, Cool, a GoPro on a Hot Wheels Car

Hugh Hefner has sold the Playboy Mansion for $100 million, according Business Insider. The 20,000-square-foot Los Angeles home was sold to Daren Metropoulos, the former co-CEO of Pabst Brewing Company. Hefner originally listed the home for $200 million, making it the most expensive home for sale in America, per the report. More from Business Insider:

As part of the terms of the sale, Hugh Hefner must be allowed to stay as long as he desires. The estate was sold by Playboy Enterprises, which leases it back to the 90-year-old Hefner. The company bought the mansion 45 years ago for just over $1 million, a historically high price for the area at the time.

The five-acre property includes the main 29-room mansion and a four-bedroom guesthouse.

Metropoulos purchased the next-door estate from Playboy in 2009, reportedly paying $18 million for it. Once Hefner's tenancy ends, Metropoulos apparently intends to connect the two properties into a single 7.3-acre estate.

WWE Makes a Ton of Money

ESPN’s Darren Rovell recently took a deep dive into the financials of the WWE. Unlike any other major North American sports league or organization, the WWE is a public company. According to ESPN, the WWE grew by more than 20 percent last year and brought in $658 million—an all-time high for the company. Here are a few other stats I found of interest. You can read it all here.

WWE is the No. 1 most-subscribed-to YouTube channel in the "sports" category, with more than 12 million fans taking in more than 10 billion video views in the past year. "In 2010, Vince [McMahon] sat down our executive team and challenged us every day to be a little bit more digital, a little by more direct to consumer and a little bit more global," Barrios said. "Five years ago, our business was 5 percent digital. It's now 33 percent. Our international business is up 40 percent and now makes up 26 percent of our sales."

In 2015, the WWE made $49 million off licensing and another $49 million of in-venue and online merchandise sales. Only "Star Wars" and "Teenage Mutant Ninja Turtles" merchandise beat out WWE in the action figure sales category. WWE, not the athletes themselves, has the rights to file to get a trademark for names used in the ring to be able to license that to merchandise producers.

Beginning in the 2017-18 season, the NBA will permit teams to feature sponsorship logos on player uniforms. The NBA won’t become walking billboards, instead the patches will measure approximately 2.5 inches by 2.5 inches. That’s neither here nor there. The Los Angeles Lakers, arguably the most historic franchise in the game, announced a deal with Hookit this week that will see the company use their Hookit Valuation Methodology (HVM) to measure the reach and financial benefit of NBA jersey sponsors. Hookit started in the motocross world and is very involved in the action sports industry, including working with us at Racer X, so this is pretty awesome for them. Here is more from the press release.

Through this analysis, the team concluded that the Hookit Valuation Methodology (HVM) uncovered significant, verified earned-media value for the team. This value was determined to be both additive and incremental to the exposure the organization traditionally delivers through its established print, broadcast and cable television exposure.

“The HVM technology provides the Lakers a platform to precisely track and understand social media value driven by analyzing digital engagement and utilizing image recognition to track logo placement in photos and videos shared” said Tim Harris, Lakers Senior Vice President of Business Operations/COO. “ In combination with our traditional television viewership metrics, we now have a more comprehensive look at what kind of value we can generate for our partners.”

Gawker Media, which includes sites like Deadspin, Jalopnik, Gawker and more, was sold earlier this week to primarily Spanish-language broadcast company, Univision. The sale comes after Gawker filed Chapter 11 bankruptcy last month after wrestler Hulk Hogan won a $140 million judgment in a privacy case involving Gawker's publication of a private sex tape (you thought WWE was big? The Hulkster just dropped the leg). Univision outbid Ziff Davis, a magazine publisher and internet company, to purchase Gawker and its seven media sites for $135 million. Forbes has more of why Univision wanted the company.

Univision’s digital media buying spree began in May 2015, when the company bought The Root, an online publication targeted at African American readers. When the acquisition was announced, The Root cofounder Henry Louis Gates Jr. said the deal “underscores the ties that have long bound people of color together throughout the Western Hemisphere.”

That spree continued in January when Univision bought a 40% stake in satirical publication The Onion for under $200 million. Between its minority position in The Onion, which also owns spinoff sites Clickhole, StarWipe and The A.V. Club, its undisclosed purchase of ABC’s 50% stake in former joint venture Fusion and its $135 million Gawker bid, Univision has committed to spend more than $300 million for digital media sites since the start of 2016.

Amazing-ness of the Week

What happens when you drop a bowling ball 150 feet onto an axe head?

On Saturday, four-time X Games BMX gold medalist Kevin Robinson set the Guinness Book Of World Records distance record for the longest power-assisted bicycle backflip when he landed an 84-feet and four inches backflip at the Kennedy Plaza in Providence, R.I. ESPN covered the event live from Robinson’s hometown. Below is a Facebook video of the jump.

“I’m a 44 year-old retired athlete and I just set a World Record!,” said Robinson. “The most rewarding part was I did this whole thing on my own. I can’t thank my friends, family and sponsors enough. Who knows what I’ll think of next?”